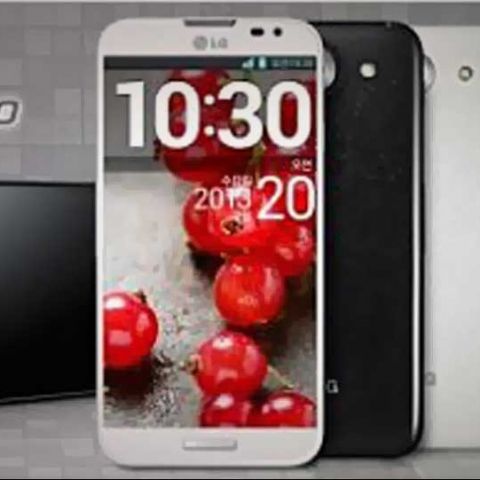 MWC 2013 is just around the corner and it looks like LG is bringing out the big guns even before the event kicks off. The South Korean electronics manufacturer has taken the drapes off the LG Optimus G Pro, something we'd expected since last week. The device boasts of a 5.5-inch 1080p HD display.

The Optimus G Pro will run on a 1.7GHz quad-core Qualcomm Snapdragon S4 Pro processor along with 2GB of RAM. It will also have 32GB built-in storage, a 13MP rear camera and a 2.1MP front-facing camera. The device will run on Android 4.1 Jelly Bean straight out-of-the-box.

A quick look at the specifications of the Optimus G Pro indicates that LG plans to take on the Samsung Galaxy Note II, which has been quite a success in the Indian market. Under the hood, an Exynos 4412 quad-core 1.6GHz processor and the Mali-400MP GPU power the Note II. It has 2GB RAM along with 16GB built-in storage expandable up to 64GB via a microSD card. It houses a 5.5-inch (1280 x 720 pixels) Super AMOLED display with Gorilla Glass 2. The rear of the device has an 8MP camera and it runs on Android 4.1 Jelly Bean straight out of the box. You can read our in-depth review of the Note II here.

The LG Optimus G Pro can also be considered as the successor to the LG Optimus G. The Optimus G was the first quad-core powered smartphone to hit the US store shelves and is also the hardware reference smartphone for the Nexus 4, which LG manufactures for Google.

The LG has also announced three other devices that will be further unveiled at MWC 2013 – the Optimus L7II, L3II and L5II. The L7II is expected to debut in Russia this week whereas the other two devices are slated as "coming soon". You can read more details about the smartphones here. LG has also grabbed some limelight in the news with the announcement that three of its previous generation smartphones, the Optimus 4X HD, L7 and L9, will receive the Jelly Bean update in the first half of 2013. You can read more details of that report here.

LG has of late been struggling with a lukewarm brand image in the Indian market unfortunately, with consumers unsure about the company’s after sales service. What do you think? Has LG finally managed to take the right steps to improve the brand image it has in India? Or would consumers, such as you, rather stick to the more established brands? Let us know in the comments section below.