The LG G6 will offer an all new 5.7-inch Univisium display and a new dual camera setup 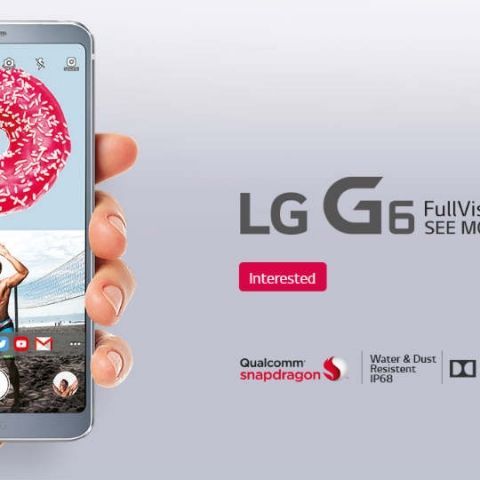 A sign-up page on LG’s Indian website is now live asking interested customers to register for the LG G6(₹ 24999 at amazon), also suggesting the launch of the device in India is imminent. The LG G6, which was announced back at MWC this year, is the latest flagship from the Korean giant and will be going against the likes of Apple iPhone 7 and the soon to launched Samsung Galaxy S8. LG’s website does not actually let interested customer book the device, but it does ask for your name, email, mobile and city if you are interested.

The LG G6 strays away from the modular design of the G5 and brings an all new unibody metal design. This is also the first LG flagship to be IP68 certified, which means it is dust and water resistant, just like the Samsung Galaxy S7. However, the main feature remains the new 5.7-inch univisium display, which has an unorthodox 2:1 aspect ratio with a 2880 x 1440p resolution. LG claims that this new aspect ratio will help consumers view content from streaming services such as Netflix and Amazon Prime in its native aspect ratio. In addition, the display supports standards like Dolby Vision and HDR 10.

On the hardware front, it is business as usual, but instead of the latest Qualcomm Snapdragon 835 SoC, LG has gone for the older Snapdragon 821 SoC. Whether this will affect the overall performance, is yet to be seen. Beyond that, the phone features 4GB of RAM and 32/64GB of on-board storage, which can be expanded using a microSD card. A 3300mAh battery powers the device and the phone gets Android Nougat out of the box.

The camera also stands updated on the rear. The LG G6 has a dual camera setup featuring two 13MP rear cameras with different specifications. One sensor has a f/1.8 aperture, 3-axis OIS and phase detection autofocus. The other sensor has a f/2.4 aperture and no autofocus, but a 125 degree field of view. At the front, the phone has a 5MP camera with f/2.2 aperture with 100 degree field of view.

While LG has not revealed any specific launch dates, rumours suggest that the phone could launch within this month or before the end of May. We can expect the device to be priced like previous LG flagships, sharing the same premium space as the Apple iPhone 7.