3 out of 10 Android devices haven't received a single security update this year, leaving them open to 24 critical vulnerabilities

In a latest report by DuoSecurity, it has been found that an impressive 77% of Huawei's phones were running the latest security updates, more than Samsung or any other manufacturer. In fact, according to its report, Huawei is the only brand to have over 50% of its devices to have the latest monthly security patch from Google.

Although Samsung has 62% market share in the Android ecosystem, it only rolled out security updates to 15% of the devices. The report also stated, “68% of Android devices are able to receive the monthly security patch. As of April 30, only 25% of those devices were running the latest security patch. 3 out of 10 Android devices hadn’t applied a security patch that has been released since the start of 2016, thus leaving them susceptible to exploits for 24 critical vulnerabilities.”

DuoSecurity's report also states that its objective is to “Educate users about the importance of applying security updates in a timely manner and supply them with helpful information on how to successfully upgrade their devices.” and “Notify users that a security update has been released and encourage them to upgrade.” 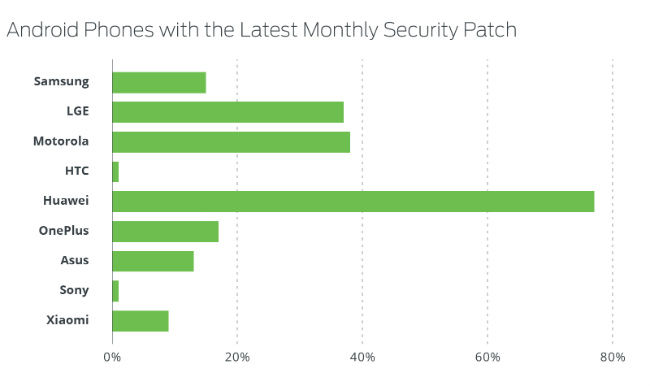 Godless Apps recently struck the Android EcoSystem, with India on top of the infected devices' list. The scary part is that these apps are available through the Google Play Store. These apps can root and hack into any Android device running Lollipop or older.