HTC U11 features frame embedded sensors which are pressure sensitive and respond to the different levels of pressure. The feature can be used to open apps or click a picture 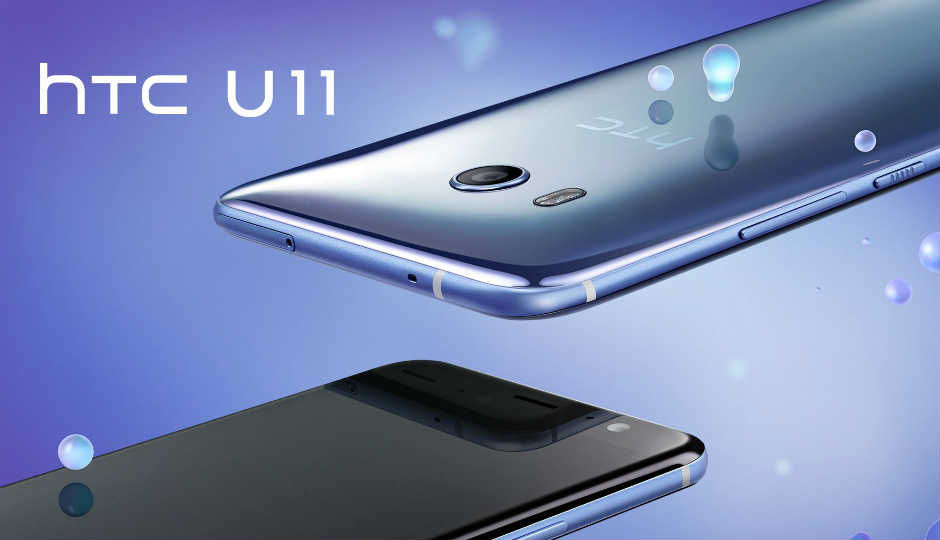 HTC has officially announced its 2017 flagship smartphone, HTC U11 at an event in Taiwan. With HTC U11, the company is trying to bridges the past and present name schemes of its flagship series. The smartphone comes with a liquid surface design language similar to the one introduced with HTC U Ultra and now includes IP67 water and dust resistance.

In terms of specifications, the HTC U11 features a 5.5-inch WQHD LCD display with a resolution of 2560 x 1440 pixels and Corning Gorilla Glass 5 protection. Powering the device is Qualcomm's Snapdragon 835 processor coupled with 4GB RAM and 64GB storage. The smartphone will also be available in 6GB RAM, 128GB storage option in select markets.

On the camera front, HTC U11 is now the highest rated smartphone on DxOMark's benchmark rating. With a score of 90, the handset is rated one more than Google's Pixel. The HTC U11, sports a 12MP ultrapixel rear camera with dual-pixel autofocus, f/1.7 aperture, 5-axis optical image stabilisation along with electronic image stabilisation. It also supports 4K video recording with 3D audio and acoustic focus where audio responds with image zoom. HTC is also improving the selfie camera with new 16MP sensor and support for 1080p video recording.

As rumoured, HTC U11 supports frame embedded sensors which are pressure sensitive and not touch sensitive. The sensors respond to the different level of pressure and can be used to open apps or click a picture. The smartphone runs Sense UI based on Android 7.1 Nougat and supports both Google Assistant and Amazon Alexa with double wake phrase. The smartphone ditches the 3.5mm headphone jack and adopts USB-C powered USonic headphones with active noise cancellation feature. HTC U11 is backed by a 3000mAh battery and will be available next week in select markets at a retail price of €749. The handset is expected to launch in India during the first week of June.