A slide from an internal presentation for HP employees was leaked yesterday, placing the HP Slate head-to-head with the Apple iPad, detailing comparative features that are marked as either ‘HP threat’ or ‘HP advantage’, depending on how the Slate racks up against the iPad. It reveals a lot of information regarding the specifications and pricing of the HP Slate, a device that has been on the radar for a quite some time, but not appearing as more than a blimp till now. It appears to have been given to employees to calm the frenzy over the iPad at HP.

Here are its specifications:

What is still not known: release date, and price of the 3G enabled version.

Check out the slide below. Do also check out the below videos, which will give you a glimpse of the product in action. 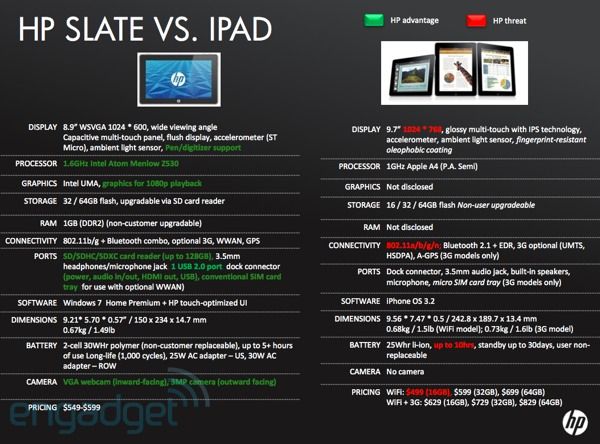 Check out how the HP Slate compares against the Apple iPad