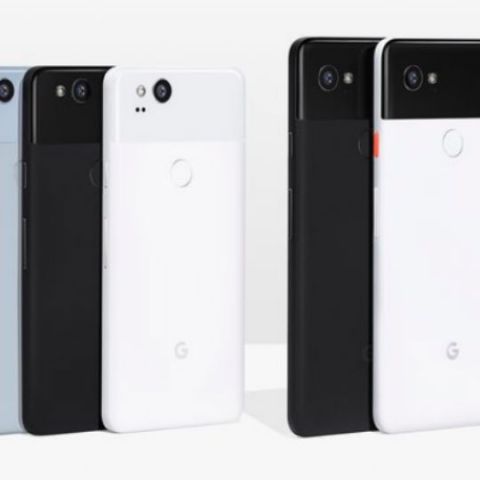 The new version of Google’s Pixel smartphones are official. The Pixel 2 and Pixel 2 XL take off right where the Pixel left off from last year. They both have POLED displays, though the XL sports a 6 inch QHD+ panel this time (with 18:9 aspect ratio), while the Pixel 2 has a 5 inch FHD display. Google has continued to focus on the camera, but it’s telling us precious little in terms of overall specifications right now.

What we do know is that the Pixel 2 and Pixel 2 XL have single cameras on the back, with dual-pixel sensors. It uses these sensors and machine learning to offer a “Portrait Mode” and other image enhancements. Google wasted little time in mentioning that the Pixel 2 and Pixel 2 XL are once again the highest rated smartphone cameras ever, on DXOMark, scoring 98. Both phones have 12.2 MP rear cameras with f/1.8 apertures.

The phone retain familiar design aesthetics, although the rear glass accent is now limited to above the fingerprint sensor. The phones are also more rectangular this time, while the Pixel 2 XL has slightly thinner bezels as well, thanks to the 18:9 aspect ratio.

Lastly, Google’s recent acquisition of a part of HTC’s smartphone division has led to a new Active Edge feature. This allows you to squeeze the sides to launch the Google Assistant on the Pixel 2 smartphones.

Both the Pixels run on the Snapdragon 835 chipset and have 4GB of RAM. They will be available in 64GB and 128GB variants and have front facing stereo audio support. Google has sadly dropped the headphone jack this time, and the Pixel 2 starts at $649 (approx. Rs. 42,200), while the Pixel 2 XL starts at $849 (approx. Rs. 55,206). We do not have India launch dates at the moment, but both phones are available for pre-orders in the US right now. They start shipping from October 17.