A Samsung Galaxy Mega 6.3 phablet stops a bullet aimed at a man's chest. 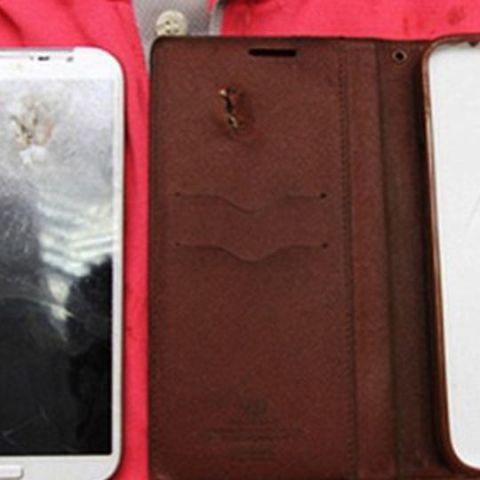 Chinese website AppleDaily has reported how a man survived getting shot because the bullet happened to strike his enormous Galaxy Mega 6.3 phablet in his pocket instead.

Apparently, the shooting victim got into an argument with another man named Xu, after he dropped his wallet and the victim picked it up and joked about using it to buy beer. They stepped outside the restaurant to fight. Han, the victim had a sickle in his hand, while the Xu whipped out a gun and fired it straight toward the victims chest.

Han was rushed to the hospital where the medical staff and police discovered that the Galaxy Mega 6.3 in his shirt pocket had blocked the bullet from reaching any of his inner organs.

Samsung’s Galaxy Mega 6.3 was launched last year and features a 6.3-inch TFT display with a 1280 x 720 pixels resolution. It has a Qualcomm Snapdragon 1.7 GHz dual-core processor and runs Android 4.2. The Galaxy Mega 6.3 comes with 16GB of built-in storage, expandable up to 64 GB via microSD card. Connectivity options included are 3G, Wi-Fi, NFC, Bluetooth and an IR blaster. The Mega 6.3 is backed by a 3,200mAh battery.

Other company' have also reported similar antics, in 2012 a man in the Netherlands was spared a bullet to the heart while driving thanks to the chest-pocket placement of his iPhone.

Windows Phone and BlackBerry phones have also shared similar stories. According to reports a Nokia Lumia 520 saved a Brazilian military soldier from being shot in the rear, while a BlackBerry Curve blocked an accidental shot from injuring a woman in Ohio in 2010.