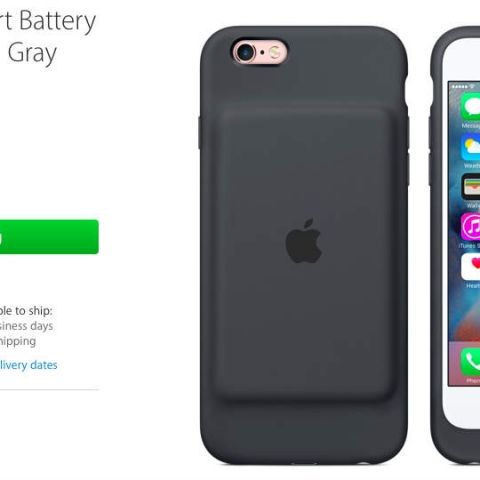 Apple has launched a battery pack for the iPhone 6 and iPhone 6s priced at $99 (Rs. 6,600 approx). The case is called the iPhone smart battery case, and comes in direct competition to the likes of Mophie, that has been making battery cases for the iPhone and other smartphones for a really long time now. The case has a bump on the back which houses the battery, and has a lightning port at the bottom.

The iPhone 6s has a 1715mAh battery, and the iPhone 6 has an 1810mAh battery. The Apple battery case add an additional 1877mAh of battery power to the smartphone. One design flaw with the smart battery case is that the LED indicator, that shows you the charge status, is inside the case, which means that if you have the phone plugged into the case, you won't be able to see the charging LED. However, you should see the charge status of the case on the drop-down notification panel of your iPhone.

With the launch of the Apple iPhone smart battery case, it looks like Apple has acknowledged the battery issues plaguing the iPhone 6 and iPhone 6s. Both the smartphones are great when it comes to overall performance, but falls short in battery life. There are a number of iPhone cases available in the market from many manufacturers, but if you would rather invest in a power bank than making your phone relatively bulky, here's our list of top 10 power banks in India. We also saw some of the best iPhone accessories under 5k, which you may want to consider.

Is launching a battery case for the iPhone 6 and iPhone 6s the right move for Apple, or should they consider making a thicker iPhone with a larger battery pack?