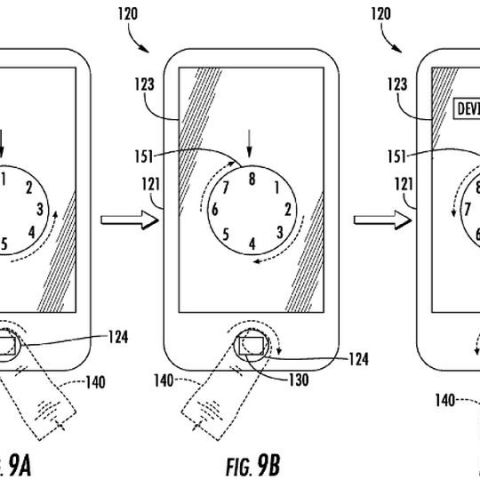 Apple's next generation iPhones may implement more complex unlocking methods, according to Apple's new Patent application. The application reveals that Apple's Touch ID sensor will also get a combination of finger print along with a pattern swipe to unlock.

Apple's patent application 13/918221 reveals work on a Touch ID button which would not only be able to read fingerprints but also interpret finger gestures. The patents are attributed to Dale R. Setlak, co-founder of AuthenTec, which was acquired by Apple to power its Touch ID technology. Right now, Touch ID has a fingerprint sensor but users place their finger on the sensor and their phone will unlock. The patent reveals that the future iPhones would also include motions, swipes and more.

According to reports, Apple may update the Touch ID in different ways. An example shows, an old rotary dialer where the user is required to rotate their finger over the Touch ID sensor to enter the required passcode. Another image shows a user swiping and rotating their finger over Touch ID to complete an unlock pattern displayed on the screen.

The evolution of Touch ID from solely a fingerprint sensor in the iPhone 5s to the expanded "Reachability" features of the iPhone 6 and 6 Plus hints at the possibilities of Touch ID in the future. However it remains to be seen whether Apple would actually implement the technology in its future iPhones and iPads.

Last month Apple had filed a new patent that protects the iPhone handset against falls. The latest patent titled, ‘Protective mechanism for an electronic device’ U.S. Patent No. 8,903,519, will help protect expensive devices from accidental drops by shifting their center of gravity mid-air.