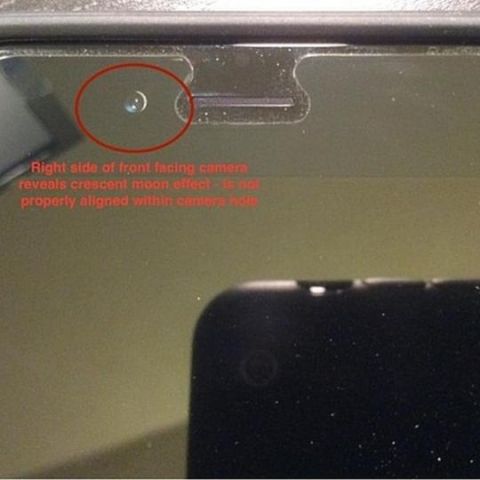 Users have been posting their complaints on Reddit.com and have posted that the front camera gets misaligned after some use. Another iPhone 6 user posted his that his one-month iPhone 6 had flakey WiFi, random reboots, and a blotchy screen. Users are also complaining that the display is prone to scratches.

A Reddit iPhone 6 user named BAnOpenMindedSkeptic stated, "My iPhone 6's front facing camera is misaligned. There is a crescent visible on the right side of the hole. This also happened to my friend's phone and a replacement model the Apple Store gave him."

According to reports, Apple has not yet zeroed-in on the issue and Apple store employees have either offered to either change the front panel which also includes the camera or replace the phone altogether.

The issue is the latest in a series of complaints that users have been reporting since the release of the iPhone 6 and iPhone 6 Plus in September. Apple has faced the 'Bendgate' controversy where users were complaining that their devices were bent out of shape when placed in pockets for short durations of time. One user even complained that his iPhone 6 caught fire in his pocket causing severe burns.

Apple responded to the complaints by saying only a "total of nine customers" had complained about the issue. It also invited journalists to its labs to show the stress tests it conducted on the iPhone 6 and iPhone 6 Plus.