The Snapdragon 8CX is the world's first 7nm chip designed specifically for thin and light laptops with fanless interiors, and will be aimed at the premium tier ultrabook market. 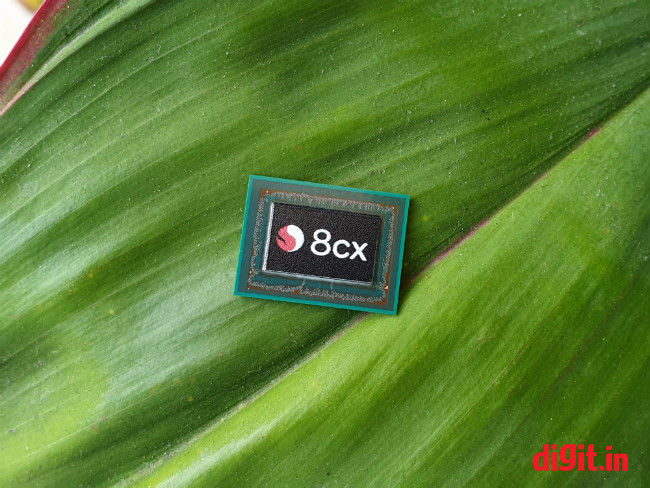 On the third day of Qualcomm’s third annual Snapdragon Tech Summit, the focus shifted to ARM-powered Windows PCs. Qualcomm announced the second-generation Snapdragon chip for Always-Connected PCs, called the Snapdragon 8CX. The platform is based on a 7nm process node, a first for a processor designed for Windows PC. It won’t replace the Snapdragon 850 that Qualcomm launched at Computex earlier this year.

The Snapdragon 8CX touts a heterogeneous architecture, much like Qualcomm’s mobile platform. The CPU, GPU, DSP and the ISP along with the LTE modem are all integrated in the chip and will work without needing fans in thin-and-light designs. The entire presentation though was filled with snarky comparisons with Intel’s processors, especially in the thin and light space. Qualcomm claimed the Snapdragon 8CX is twice as powerful as a 7W Intel Y-series CPU and offers the same performance as a 15W Intel chip, but with higher power efficiency. The performance metric is probably measured through synthetic benchmark, most likely in single-threaded performance. The number is interesting because the new MacBook Air is powered by the 7W Intel chip, and going by the tall claims by Qualcomm, it’s apparently twice as fast. The performance boost is most likely for the 7nm process node as Qualcomm is able to pack more transistors even though the company had the choice to increase power efficiency here.

The Snapdragon 8CX will use Kryo 495 CPU cores in a big.LITTLE arrangement. Four performance cores based on the Cortex-A76 and four efficiency cores based on the Cortex-A55, that will divide the load up depending on the intensity. Each core will get a private L2 cache and a shared L3 and system cache. While Qualcomm didn’t specify the individual size of the cache, save for the fact that there’s a total 10MB of cache memory. Qualcomm did not officially disclose the clock speeds and the RAM limit of the Snapdragon 8CX, but the reference design laptop that the company had in the demo rooms was running at 2.75GHz with 8GB of RAM and 250GB SSD.

The CPU is paired with the new Adreno 680 GPU which Qualcomm claimed to be the most powerful graphics unit they ever made. It’s reportedly twice as fast as the Adreno 630 in the Snapdragon 850 and 3.5 times faster than the Snapdragon 835 that powered the first-generation ARM-powered Windows PCs. The big metric to note here is that the GPU on the Snapdragon 8CX is 60 percent more efficient than the previous generation. Interestingly, Qualcomm showed off the graphics processing capabilities of the new chip with a demo of Asphalt 9 which is more popular in smartphones than PCs. Nevertheless, the Adreno 680 has twice the number of transistors and twice the memory bandwidth and supports DirectX 12 and can output to two 4K HDR monitors simultaneously.

The Snapdragon 8CX will support Windows 10 Enterprise with collaboration with Mozilla to develop a dedicated browser for Always-Connected PCs. Windows on Snapdragon can now come with up to 16GB of LPDDR4X RAM and support NVMe SSD and UFS 3.0 storage, although it will ultimately depend on the OEMs to ship the laptops with faster and more memory.

There has been no increase in the battery-life in the Snapdragon 8CX SoC. It will still deliver over a day of battery life, which in my opinion, is the real reason one should get a Snapdragon-powered PC. It also sports the same Snapdragon X24 LTE modem Qualcomm announced in the Snapdragon 855 that can deliver peak download speed of 2Gbps. The company even teased that they will be ready with a 5G-powered Snapdragon chip for Windows in 2019. That’s certainly something to look forward to in markets where 5G will be deployed next year. Qualcomm Senior Vice President, Sanjay Mehta said the first wave of Snapdragon 8CX-powered PCs will hit the market in the second half of 2019 and IFA in Berlin is when we can expect the new PCs to come out. More importantly, he said the PCs will be coming to emerging markets including India in the second or third quarter of 2019.

While we will reserve our verdict about the Snapdragon 8CX till we get our hands on a PC powered by the new chip, the Snapdragon 8CX certainly sounds impressive in the tall claims Qualcomm made at the presentation. It’s the first SoC Qualcomm has designed that is dedicated to PCs, and safe to say, Intel should be a little scared right now.

Disclaimer: Qualcomm paid for the author's travel and stay at Hawaii