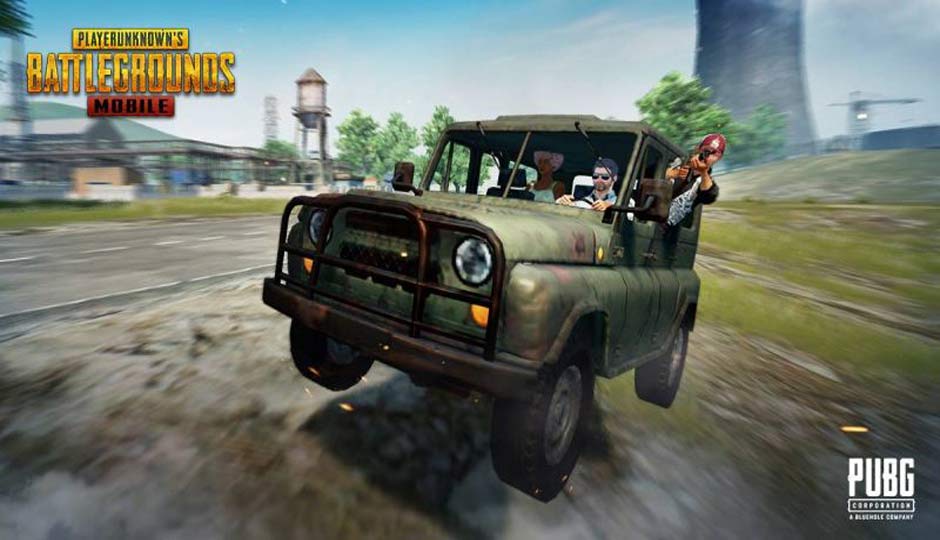 The quest for the ever-elusive Chicken Dinner in PUBG Mobile evades players even more when they begin climbing up the ranks. Let’s delve into some driving tips and tricks that can assist you in raking up those wins.

It’s the start of a new season in PUBG Mobile and players are gearing up to increase their in-game rank. In maps as ginormous as the ones that PUBG Mobile sports, vehicles and driving can get you a long way. With a slew of vehicles strewn across, they might often feel an overbearing sense of confusion when it comes to vehicle choice and the correct way of using them. However, vehicles, when used right, can launch a player into the top spots in the game, allowing them to avoid losing points and continue rising up the ranks. All three in-game maps, Erangel, Miramar and Sanhok, sport a set of common vehicles as well as a couple of map-exclusive vehicles, that seem to be a better fit for the corresponding terrain.

With the introduction of FPP driving in PUBG Mobile (about time!), players are seen bifurcated into two very distinct groups, a group of players that immensely enjoy FPP driving while the other group that strongly dislikes the new style of driving and vehemently refuses to use it. FPP Mode, earlier, still had TPP driving which many players feel more comfortable with since FPP driving can seem a little too twitchy and erratic to some people. However, FPP driving has undeniably brought in a new feel and look to what was, one of the game’s most unmodified features since release.

That being said, FPP or TPP driving may appear simple, since it is essentially just pressing down on the accelerator and turning with the right and left controls (no gear-shifting) and obviously not jumping out of the car at high speeds. However, there are a couple of more advanced nuances, if perfected, can give you an edge over your competition. Let’s look at some interesting and useful, and some wacky, driving tips in PUBG Mobile. 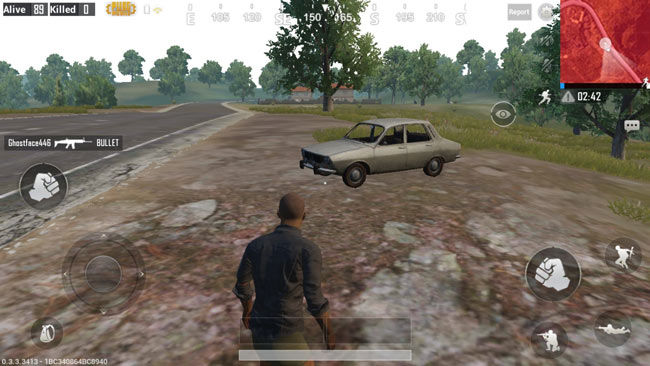 PUBG Mobile offers you a wide variety of vehicles on multiple spawn points across all maps. From the popular driving choices like the UAZ (Jeep) or Dacia (Sedan) to unconventional and infamous choices like the boat or the motorcycle with the sidecar, the options are truly endless. Sometimes, finding a vehicle, any vehicle, can be the right strategy and can be used to access popular loot locations (Military Base, Georgopol crates, Hacienda del Patron and more) off the plane path and loot uninterrupted, away from any immediate danger. This strategy almost always ensures great loot and lasting longer in the game than plopping onto popular locations directly on the plane path, which will probably lead to your head being blown off by that nasty Kar98 or M24 (so glad the M24 is now a ground spawn!). 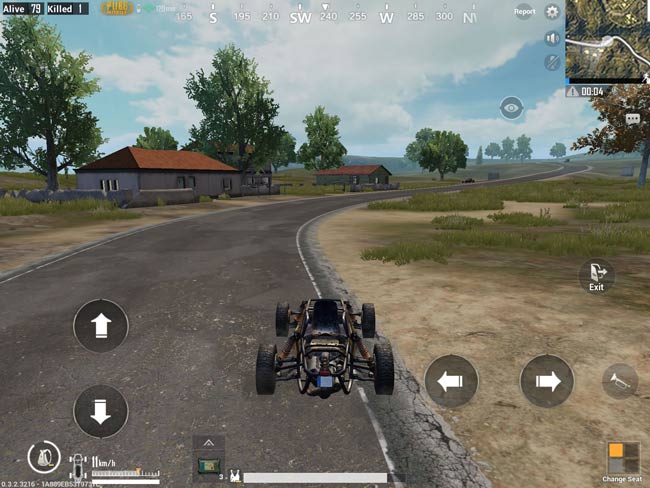 The Buggy is lightweight and fast

However, when you are playing a more traditional game on any of the maps, it will serve you well to choose your vehicle in accordance with the terrain you will be playing in and the placement of the safe zone, since that is where you need to reach. Motorcycles and Buggys can provide you with speed and agility to travel miles in a blaze. However, they tend to leave you more open to automatic sprays and fire by your enemy, who will find it easier to land shots on you than if you were in a Dacia or UAZ. Buggys also tend to swerve or spin out of path easily, causing you to probably stop at inopportune timings. If you are travelling through densely populated cities like Pochinki, San Martin or Paradise Resort, your best bet would be to snag a UAZ, Muscle Car (Miramar only) or Dacia that would provide you with the much-needed cover. The UAZ is available in three variants, the soft-top, hard-top, open-top and bulletproof, the hard-top and bulletproof being the most sought-after since it offers maximum cover. 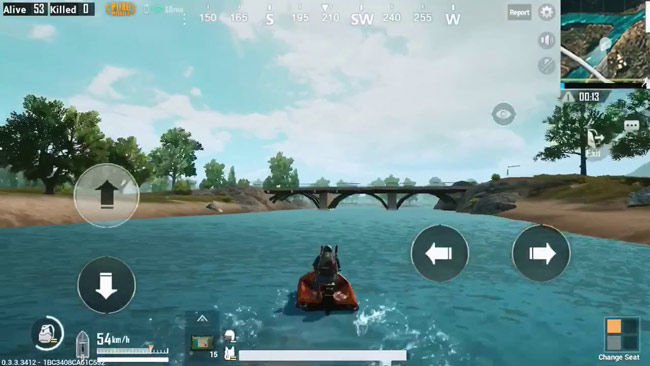 The Jet Ski is way easier to control than the boat, but harder to find

Similarly, in water, a boat is more commonly available, but its turning radius is an absolute disaster, so it mostly lands up on the land when players try to spin it around, towards the safe zone. The Jet Ski is faster, safer and turns better, however, it is far rarer. In Miramar, the terrain is vastly different than Erangel or Sanhok, that sport more grounded terrains. Vehicles like the pickup truck are slower but attempt to stay firm to the ground owing to their weight, making them more suitable choices in Miramar since the motorcycle and lighter vehicles tend to get launched off bumpy roads and often lead to them flipping over. The Muscle car, which is found in Miramar only, is a great vehicle for this map since it is heavy which leads to lesser instances of the vehicle losing control on the bumpy terrain, additionally, it is also exceedingly fast, second only to the motorcycle. 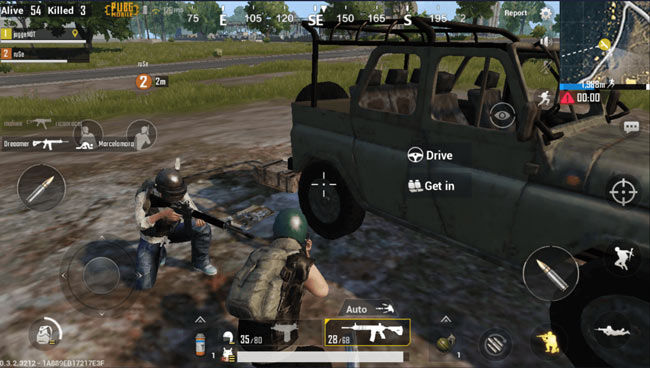 Vehicles can be used pretty effectively as cover and hiding spots in PUBG Mobile. Squads or duos, driving around in vehicles, can many times travel almost the entire game in a vehicle and stay relatively safe, since other teammates in vehicles can shoot at enemies. However, if you are playing solo, it would be advisable to stop, get out, take cover and shoot when enemies lock on to your vehicle. The reason? Well, you cannot shoot back and the enemy can easily blow up your vehicle, thereby incinerating you. So, when your vehicle begins to get hit in Solo mode and the shots are landing, you should get out of the vehicle and firstly, take cover behind it. Assess where the shots are coming from and then line up your shot (try using ‘peek’ since it provides the most cover) and eliminate the impending threat. However, ensure that you are cautious of smoke coming out of your vehicle’s engine, which indicates that the car is closed to being blown up and effectively, killing you. Don’t get too close to the engine when you are taking cover behind the vehicle. 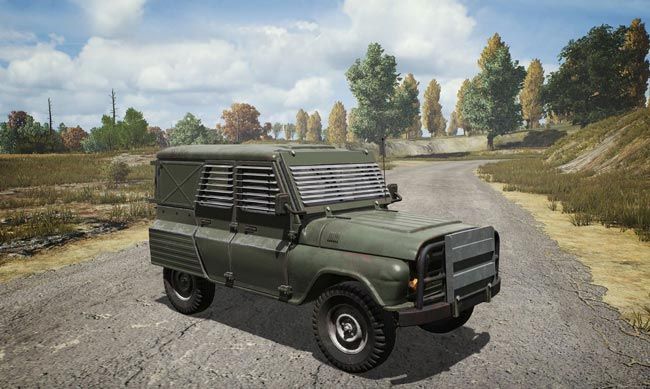 The Bulletproof UAZ makes for an excellent hiding spot

Vehicles can also be great hiding spots, but obviously, only the right kind of vehicle. A buggy is not going to hide you, is it? Vehicles with a bigger form factor and those that are covered sufficiently can make great hiding spots. Simply change seats and slide into one of the backseats of the vehicle. The front seats act as a visual shield, often causing enemies to miss you. Try parking the vehicle in an inconspicuous location that makes it look like a regular spawn. We’ve personally witnessed multiple players scurrying off, never noticing that we were hiding in the back seat, making for some good laughs. Vehicles like the bulletproof UAZ, which can be obtained through a special drop when a Flare Gun is fired off outside the safe zone, are very heavily covered from all sides, even sporting sturdy grails on the windows and windshield. These make for excellent hiding spots, protecting you from the madness that ensues in the Top 10-20 of the game.

Ever notice an enemy vehicle in the horizon, looming towards you? Instead of explicitly hiding from the risk of being run over by the vehicle, you can seize a good vantage point and begin shooting the engine (the front) of the vehicle to blow it up and possibly eliminate an entire team of four, travelling in it. Automatic guns are your best bet here, so any SMG or Assault Rifle, capable of strewing around bullets from their nasty spray can quickly make a car go up in flames. However, if the car is going at a considerable speed, ensure that you lead your bullets by a bit to ensure that it actually ends up hitting the vehicle. Tweak your scope sensitivity to make sure that your sprays do not end up going everywhere and mostly stay confined to a particular area (You will also need to pull down on your screen to adjust for the muzzle rise). 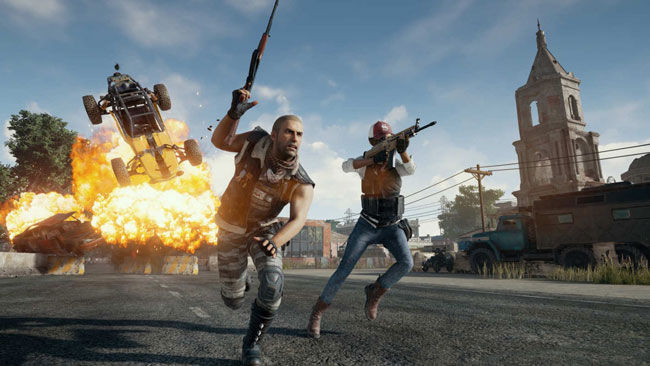 This method of eliminating enemies is great when playing in duos or squads since it allows players to get rid of a considerable threat without having to actually engage each of them, one on one. Blowing up an enemy vehicle becomes the easiest when the vehicle comes to a standstill since you can easily shoot the engine in plain view. Also, a good practice in PUBG Mobile is to pop the tires of enemy vehicles to ensure that they don’t get away easily. Weirdly enough, motorcycle tires cannot be popped. We don’t know yet if this is a glitch or intentional.

There are a  few additional vehicle and driving-related elements to keep in mind while playing PUBG Mobile. Firstly, be wary of bridge campers. Players often set up shop on bridges, hiding behind or inside vehicles, lurking to shoot down enemy vehicles. It would serve you better to scope onto the bridge and eliminate the threat before passing through or to simply take a boat to reach the other side. Secondly, use your boost sparingly, since excessive boosting can quickly deplete the gas in a vehicle. Speaking of gas, remember to pick up gas cans! Especially when you start off at a considerable distance away from the safe zone. 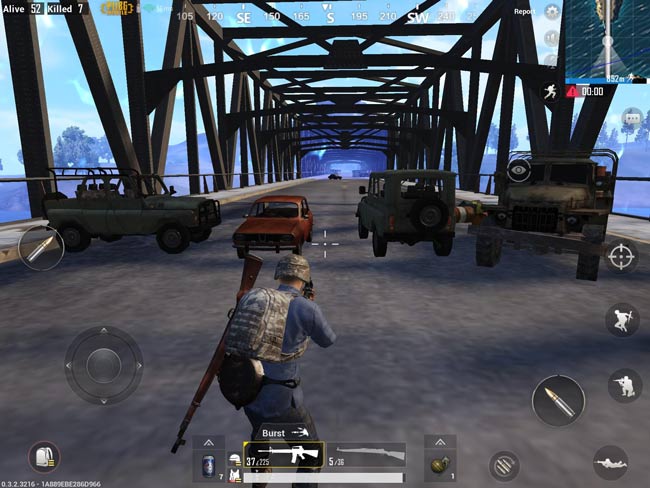 Bridge campers can be a menace

Lastly, we have noticed sufficient backlash being thrown around at FPP driving with players saying that the controls feel too twitchy and the field of view is drastically lesser than that of TPP driving. While the latter is true, the former is mostly the effect of being so close to the wheel and effectively, the road. You will also notice that in FPP driving, you need to press the left and right buttons a lot lesser to turn since the sensitivity seems higher. FPP driving is fun and exhilarating when you get used to it. However, if you have been more accustomed to TPP in PUBG Mobile then chances are you are not going to like it too much. However, to truly master FPP driving, all you can do is practice! And also remember that the premise is pretty much the exact same since the controls are the same. Players got used to FPP mode, but it took a while, the same is true with the driving style.

There you have it! A few, essential tips and tricks to better your PUBG Mobile game and use driving and vehicles to give you the edge. Try them out and let us know what you think about them at editor@digit.in. Until then, keep playing and raking in those Chicken Dinners with these simple but useful driving and vehicle tips.