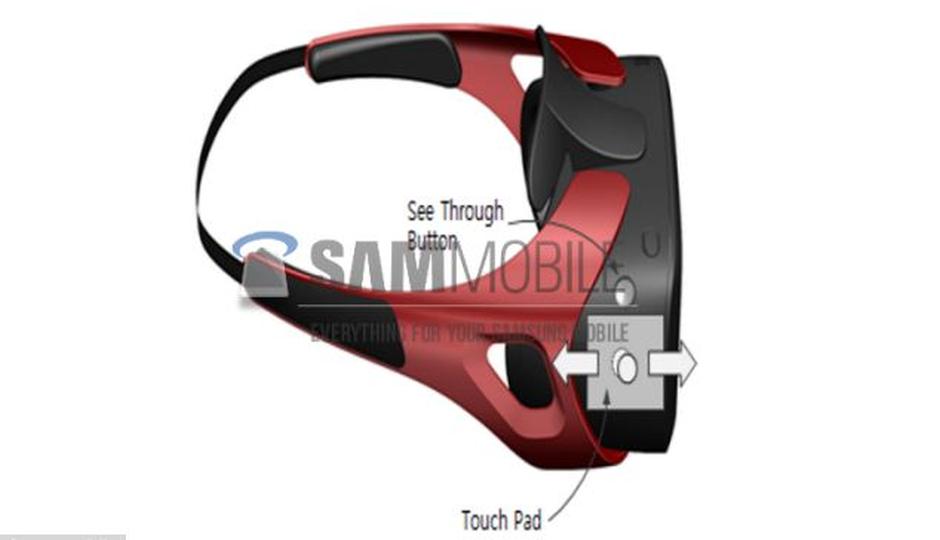 Sammobile has published the first image of Samsung's rumored virtual reality device, the Gear VR. The headset has been developed by Samsung in collaboration with Facebook owned Oculus VR.

The virtual reality headset has a modular design and comes with a soft elastic head band and soft padded cushions to make it comfortable to wear. The headset uses AMOLED display technology and allows users to connect with a Galaxy device using USB 3.0. Samsung's Gear VR uses the smartphone’s gyroscope, accelerometer and processing power to track head motion.

The Gear VR has a see-through button on the right side, which uses the smartphone’s rear-facing camera sensor which supplies a video feed of the outside world to the user. It also has a touchpad located directly under the see-through button, that allows users to navigate through the user interface on the Galaxy smartphone. Samsung is dedicating an entire section of Samsung Apps for Gear VR and will include apps like Theatre, Gallery and 360 Player. According to reports, Samsung will be making the Gear VR’s SDK available to developers soon.

Samsung's Gear VR is similar to Google’s Cardboard VR headset which the internet giant gave to I/O 14 attendees. The Cardboard app lets users slot their Android device into a do-it-yourself cardboard viewer and with a special lens, lets users interact with various Google services like a VR headset. Samsung's Gear VR which is expected to be announced at the IFA 2014 in September, along with the Galaxy Note 4, will rival Facebook's Oculus Rift and Sony's Project Morpheus.