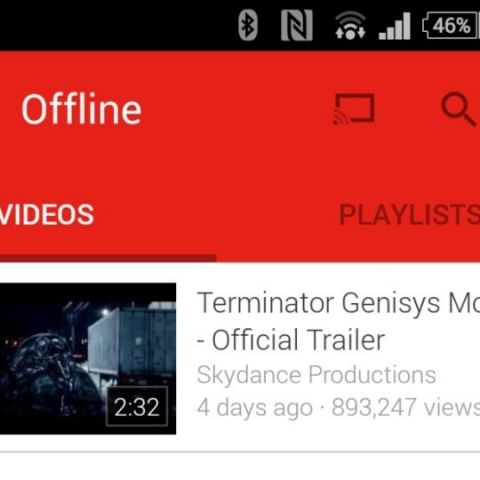 YouTube has launched the offline feature that allows users to download videos to their Android or iOS device for later consumption without internet connectivity.

Google stated that uses will have to sync with YouTube to watch the videos. The downloaded content will be available for offline playback only through the YouTube app, and can be downloaded via Wi-Fi connectivity or mobile data. The videos will be available for viewing for 48 hours only, to help avoid issues involved with free downloading of copyrighted content, the company stated at the launch. YouTube stated that, "much of India's popular YouTube content" is available to view offline.

John Harding, Vice President of Engineering at YouTube, said of the new offline feature, "In a country like India, the future of the Internet is mobile... By launching this offline experience on YouTube in India today, we hope to help people move past the challenges of data connection, speed and cost to enjoy a smooth, buffer-free version of YouTube."

Speaking about how content partners will benefit, Ajay Vidyasagar, Regional Director of YouTube Partnerships, YouTube Asia-Pacific, said, "The new feature will also help our partners bring more viewers to their content and fine even greater success on our platform."

Google had announced YouTube's offline feature along with the Android One devices earlier this year. The new feature will be useful in India which has the slowest internet speed in Asia, poor 3G connectivity and expensive data plans. YouTube has over 10,000 Indian films and over 250,000 Indian songs. According to a recent report, Indians watch nearly 5 billion videos on YouTube every month and the country is expected to become the second largest market in the world, for video content, by 2015.