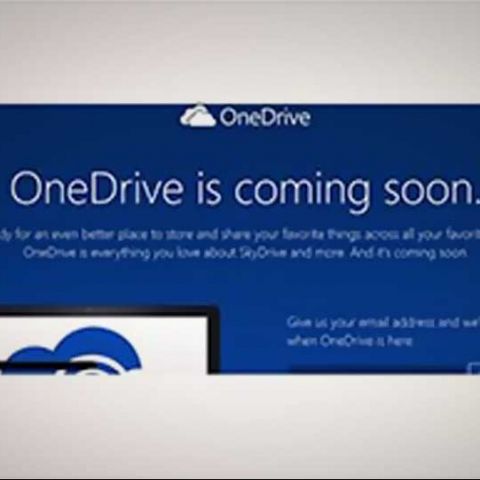 Microsoft has announced that it is renaming its cloud-based storage service SkyDrive to 'OneDrive' after losing the battle over the name against UK satellite broadcaster British Sky Broadcasting Group six months ago.

A U.K. Court ruled that the name SkyDrive is an infringement upon BSkyB's trademark on the word "Sky". Initially Microsoft had decided to appeal against the UK courts ruling but later dropped it for a "reasonable period of time to allow for an orderly transition to a new brand" for SkyDrive.

"Changing the name of a product as loved as SkyDrive wasn't easy," Microsoft acknowledged in a post to a new blog. "We believe the new OneDrive name conveys the value we can deliver for you and best represents our vision for the future."

Coincidentally it ties very well with Microsoft's 'Xbox One' branding. Microsoft will rename the SkyDrive and SkyDrive Pro to 'OneDrive' and 'OneDrive for Business' respectively.

Microsoft is rumored to be working on Windows 9 OS codenamed 'Threshold'. According to reports the new Windows 9 OS will be announced at Microsoft's developers' conference, BUILD, in April 2014. The new OS will bring the Start menu back to Windows and will run metro-style apps on the desktop as well as traditional desktop applications.