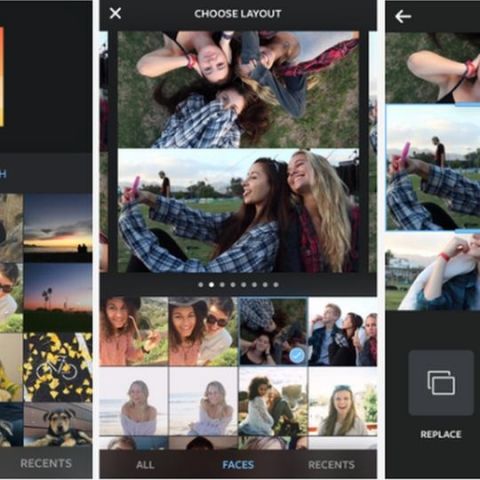 Instagram has announced a new app called Layout that helps you combine multiple images to create a single custom photo collage. Layout from Instagram is now available for iOS devices and will be coming to Android in the next few months.

Layout automatically shows previews of custom layouts and users can choose up to nine photos from their camera roll to make the collage. It has a feature called 'Faces' that shows all the photos in the camera roll that feature people. Users have an option to Drag and drop photos, pinch to zoom, crop or pull the photo to adjust its size and get the right layout. It also has a “Photo Booth” button that captures a series of photos spontaneously and they will appear instantly in a layout.

“The first thing you see is a view of the Camera Roll,” explains Joshua Dickens, Product Designer at Instagram. “Most apps give you a bunch of empty grids. But more important is choosing the photos you want to share, before you lay them out,” he says.

Instagram says that collage-making is a very popular activity on the photo sharing service. One in five monthly active users on Instagram use a collage app at least once, like Pic Stitch, Pic Collage, InstaCollage, PhotoGrid, and many others. These apps are very similar in nature and offer a variety of blank photo grids which users can customize with their own photos, along with optional texts or stickers.

Instagram says that the Layout app has been in development over the past few months. Similar to its video app Hyperlapse, the company is not planning to generate additional revenue with the app but rather wants to encourage photo-sharing to Instagram.

“A key part of the Instagram vision is about inspiring creativity,” notes John Barnett, Product Manager at Instagram. “Creation should be simple, intuitive and fun,” he adds.