Instagram’s new look makes you scroll the app’s feed horizontally post by post, forcing you to see ads for longer.

Here’s an Instagram story you don’t want to miss out on: the Facebook-owned company quietly switched the look of the app’s feed for some users last night. As part of the new look, it made the feed scroll horizontally instead of vertically. It even included a first-time tutorial to show users how to use the new look. When morning came, Instagram reacted to the severe public backlash by quickly rolling back to the old look and releasing a statement of apology on Twitter.

In its tweet, the company said, “Due to a bug, some users saw a change to the way their feed appears today. We quickly fixed the issue and feed is back to normal. We apologize for any confusion.” While this was the company’s official explanation for the quiet server-side modification, Adam Mosseri, Head of Instagram, had a slightly different story to tell in his Twitter reply. “Sorry about that, this was supposed to be a very small test but we went broader than we anticipated.”, he tweeted approximately an hour before the company did.

What this means is that Instagram’s new look is definitely no bug—the new horizontally scrolling feed came with a tutorial and everything, the way most apps do when they receive a major makeover. The company prematurely releasing the look for a wider audience than anticipated was the real bug. It’s not clear at the moment if Instagram plans to roll out the new look to all of its users in the near future. 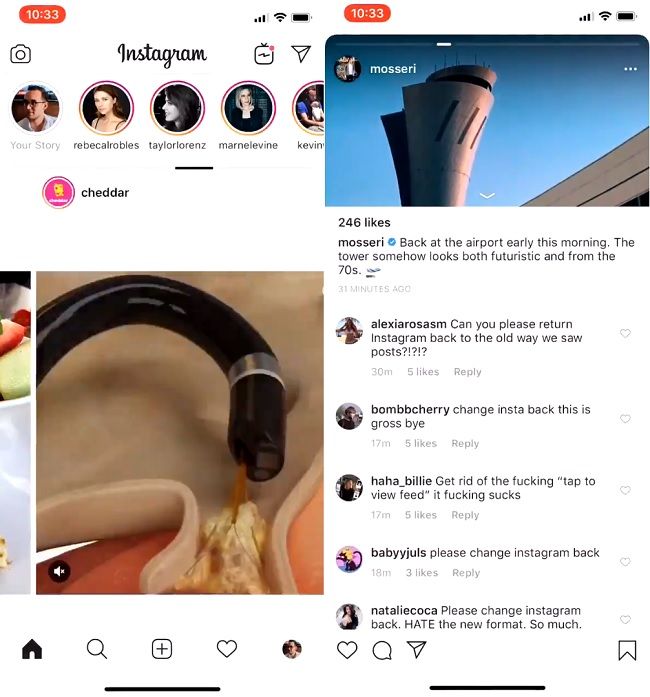 According to a video of Instagram’s new look shared by Senior Reporter Alex Heath, the Stories section of the app remains the same but the feed that has been scrolling vertically since the app’s launch in October 2010 now scrolls horizontally. Unlike the original look, where users could scroll down quickly and zip past posts they didn’t want to see or stop between posts, the new look  shows one whole post after another, forcing users to take notice of every single post including ads. The description and comments still appear below the picture but take on an expanded look when pushed up. A definite scroll bar on top replaces the bottomless vertical feed but does not allow users to slide it around.

Instagram’s midnight blunder was met with harsh criticism and mockery from users who received the new UI. Most of them indicated resistance to the new look (as is the case with most app refreshes) and took to Twitter to voice their thoughts. One can only assume Instagram is making such a change to display ads forcefully and for longer. For all we know, Instagram will still have a heart and not switch to the new look after all (given the backlash on Twitter). Keep your fingers crossed.