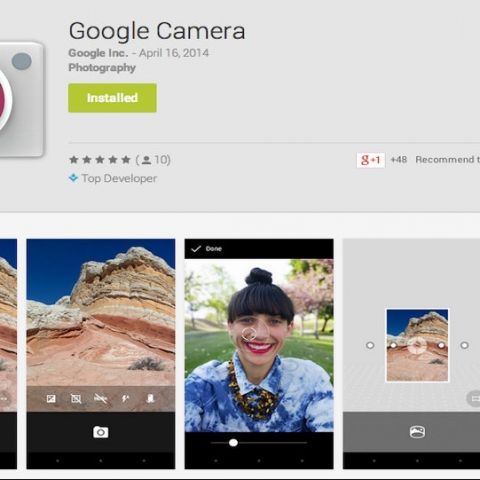 Google has released a new standalone camera app for Android called Google Camera. The app is available for download from the Google Play Store for smartphones and tablets running Android 4.4 KitKat. It will be launched for other devices as well according to Google.

The app is available to Nexus phones and tablets for now. It brings Photo Sphere mode which was introduced in Android 4.2 and lets you shoot 360 degrees immersive shots that look similar to Google Street View images.

Another feature available in Google Camera is Lens Blur- an SLR-like effect that changes the focus of the image after taking the shot. Google also mentioned in a blog post that the Camera app has an extra large capture button, sleek design and also brings the 100 percent viewfinder for capturing maximum resolution.

In the blog post, Google writes, "Lens Blur replaces the need for a large optical system with computer vision algorithms and optimization techniques that are run entirely on the mobile device, simulating a larger lens and aperture in order to create a 3D model of the world."

Google has added the ability to inset and resize Google images in Gmail. The feature can be accessed from Auto-back feature which is available for Android and iOS users and allows you to save images online. Google has inserted a photo-attachment button in Gmail that allows users to see previews of their photos in Google . The app allows you to browse through preview images and add multiple pictures into an email simply by selecting them. Google has also added the ability to re-size the images inline while composing messages. The new feature will help promote Google as a photo storage service like Dropbox and Flickr.