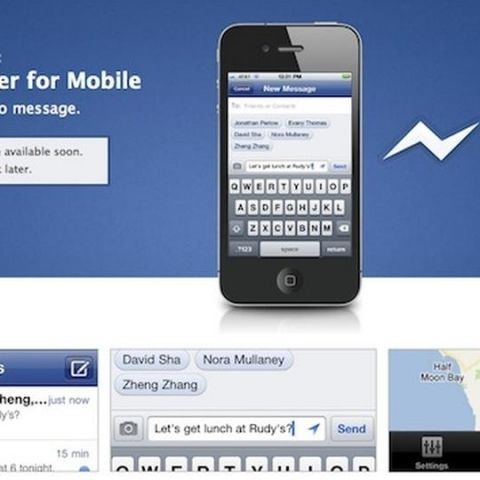 Facebook has confirmed that the Messenger App has started splitting. Users who have not downloaded the app may see messages disappearing from the main Facebook app. Facebook stated that the move will affect iPhone and Android app users, while messages in the iPad and Windows Phone app will remain unaffected.

The social networking giant says that switching to Messenger will benefit all users as messaging with Messenger is faster and more reliable. According to reports, the app launched in 2011, has more than 200 million monthly users. A Facebook spokesperson said that the changes will continue to roll out over the coming weeks.

“In the next few days, we’re continuing to notify more people that if they want to send and receive Facebook messages, they'll need to download the Messenger app,” said Facebook in a statement. “As we’ve said, our goal is to focus development efforts on making Messenger the best mobile messaging experience possible and avoid the confusion of having separate Facebook mobile messaging experiences.”

Facebook has been prompting users to download its Messenger since April, when the company announced it would be making the switch, users could still access messages without downloading Messenger until now. Last week, Messenger holdouts received an email alerting them their messages would be moved over to the Messenger app in the very near future. Although many users have responded negatively to the change, Facebook says that the decision to make Messenger a mandatory installation was made after getting a global positive response to the app.