It just so happened that the 'Broadband For All' conference, organised by the Cellular Operators Association of India and Ericsson, saw both sides of India's continuing call drop debate, on a single stage. The event was organised in New Delhi on Tuesday with an aim to discuss India's broadband connectivity issues and the potential of Fifth Generation mobile networks, but the discussion on the country's current stalemate between telecom operators and the Telecom Regulatory Authority of India (TRAI) was inevitable. The event saw industry stalwarts like Sunil Bharti Mittal (Chairman & Group CEO, Bharti Enterprises), Rajan Mathews (Director General, COAI) and  Paolo Colella (Head of Ericsson's India region), on a shared panel with Union Minister for Communications & Information Technology, Ravi Shankar Prasad and TRAI Chairman RS Sharma. Sparks were to fly, and they did.

While Ericsson highlighted the need for better networks and more spectrum allocation to create the ideal networked society, the panel conversation took a turn towards the obvious. As most of us know by now, the telecom industry and the regulator are at loggerheads with each other on the call drops issue. On one hand, Telecom Operators are being penalised to the tune of Rs 3 per subscriber per day while on the other hand installing new mobile towers is also a difficult proposition given that towers cannot be installed near residential areas due to radiation issues (which by the way are now completely dismissed as a threat by both the Government & the industry).

Another point of the ongoing debate is that COAI claims, the call drop penalities will have severe financial implications on the telecom sector to the tune of Rs. 54,000 Crores a year. While TRAI on the other hand. claims that the loss will not amount to anything more than Rs. 800 Crores a year.

The real loser in this debate though is the consumer. Even though the regulator slammed COAI for "insulting consumers" by claiming that consumers will delibrately start dropping calls to earn Rs 3 every day, the problem still remains, call drops continue to persist.

A few months back, The Department of Telecom (DoT) and Urban Development Ministry had agreed in-principle to permit installation of mobile towers at government buildings, but no clear guidelines have been stated so far, barring telcos from installing new towers to curb the call/network drop issues. Seems like logic is the only enemy in this situation. At the Ericsson-COAI event, all these issues were addressed by both the Government and Industry representatives, to a point where a subtle face-off could be sensed between both parties. It all started with Mittal taking the podium to address the audience.

Referring to Airtel's plan of investing Rs 60,000 crores in capital infrastructure and addressing IT Minister Ravi Shankar Prasad directly, Mittal said, "As I was walking up the stairs, 2 or 3 of my old media friends said, where are you going to get your Rs. 60,000 Crores from?...but, today to my friends in Ericsson, I have to say that the Rs. 60,000 Crores will be paid in happiness when my minister is happy...I was at the ministry even last night and he (the minister) continues to remain unhappy." He then went on to say that he would like to assure the minister and the industry that Airtel will commit to improving their network services. Mittal also lauded the Government's Digital India initiative and encouraged frugal banking products such as mobile wallets and other mobile banking services. He then put forward certain issues faced by India's telecom industry.

Again addressing the IT Minister, Mittal explained that this year, Airtel has made capital expenditures on networks to the tune of Rs. 16,000 Crores, excluding investment in spectrum, but to improve network quality "We will need your (the Government's) support. This particular vision cannot be achieved even by an eficient private sectore." He continued to explain that even though Airtel networks have been taken to rural areas, forests and as far as the Himalayas, broadband for all will need more support from the Government.  "I have tried hard but not succeeded for all these years in some of the important issues facing this industry." He then put forward some issues that required the minister's attention such as increasing spectrum allocation, early spectrum auction, steadying spectrum price, checking spectrum profiting and incentivising fixed lines.

All this while, the minister was patiently listning only to take the stage with a very strong message for Mittal, Airtel and other telecom operators. "I don't want to be called as the call drops minister," said Prasad and his message was recieved loud and clear. He went on to say that inspite of the growing inefficiency of networks, it took "a lot of nudging" from him to make telecom operators like Airtel realise the shortfall in their networks. "I have done my duty. The operators must do their's," said Prasad. Going on to compare Airtel's performance to BSNL, he said that when he was campaigning in Bihar, he found himself at a height of 3,000 feet and could not get a signal on his Airtel mobile, while other ministers accompanying him had full service from BSNL. "The day Airtel provides connectivity at 3000 feet, that day Sunil, I will compliment you," exclaimed Prasad. 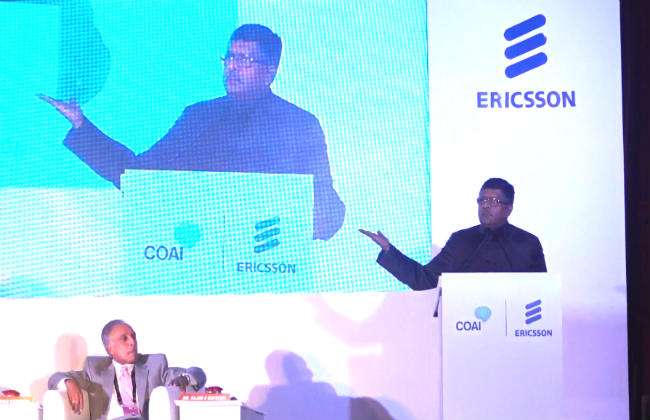 The repartee between both the Minister and the Bharti Chairman, made for an interesting peep into the underlying issues between the Government and telecom operators. One couldn't help but wonder if the consumer's interests have been overshadowed by this uncertainity surrounding the growth of India's telecom sector. Before we even talk about propounding technologies like 5G and Optical Fiber, both the Government and the Industry need to reach a common ground on an issue as basic as calling. At the end of the day, general public sentiment demands better services and the technology is all there and up for grabs. Question is, when will we reach out and actually grab it?

Watch Rajan Mathews, as he talks about the future of cellular networks in India.