Upcoming Xiaomi device “will change the lives of the entire country”: Manu Jain 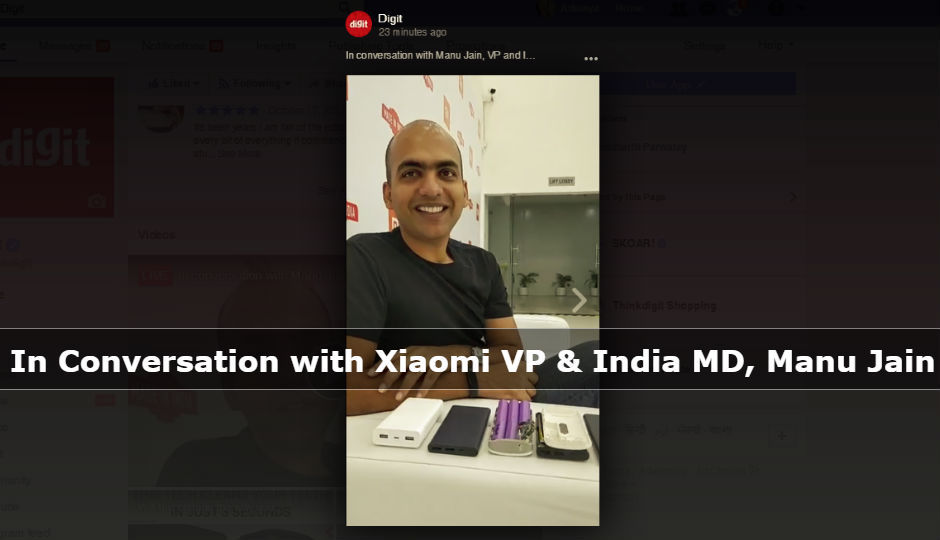 In his post he writes, “Gained insights on the way people lead their lives in rural India. Fingers crossed for a new product that I believe will help change their lives.”

Met this incredible couple during my field trip across villages. I was humbled by their warmth, and hospitality they offered me

Gained insights on the way people lead their lives in rural India. Fingers crossed for a new product that I believe will help change their livespic.twitter.com/hTNmiWmZ6H

We had a chance to speak to Jain on the sidelines of the launch of the new Mi power bank 2i in India, where he told us that the new device “will change the lives of the entire country, especially people living in rural India.” When asked if Xiaomi is targetting rural smartphone users with a low-cost JioPhone-esque device, Jain refrained from comment, but the Xiaomi VP seemed pretty optimistic about what’s to come. “There’s something that we’re planning to launch, but I can’t share more details right now. This is something we would be able to share a few weeks from now,” he added. “We are trying to explore something else which is going to be revolutionary. This is still work in progress just wait for a few more weeks.”

While Jain wouldn’t comment on the launch of the mystery device or the much anticipated Redmi Note 5, he reiterated the success of the Redmi Note 4. “Redmi Note 4 continues to be the best-selling phone in India. This year has been really phenomenal for us. Redmi Note 4 was the number one selling phone in Q1 and in Q2 and again in Q3, and it’s incredible because it’s just 10 months old,” Jain said.

Touching upon its product portfolio, including the Mi TV ecosystem, Jain said that consumers in India can expect a bunch of new product categories to launch in the “next few years.” It seems that Xiaomi is still testing the waters and studying the smart TV market before committing to it wholeheartedly. “Please understand that we’re a small team of 300 people, so 300 people over three years. Have made Xiaomi the number one brand in the smartphone space. Now, we will start focussing and expanding on many other categories in India,” Jain confirmed to Digit.

Talking about Xiaomi’s business model of selling quality products with lower margins and getting additional income through products like MIUI and added service, Jain said that the company will stick to the strategy. “Our final product is not phones, it is MIUI and phones and other hardware products are a vehicle to deliver our software services. We have been working on this in India, China and globally. We have started monetising our MIUI in India in multiple ways and we make decent amounts of revenue and profits from MIUI in India,” Jain explained.

An example of how Xiaomi does this is through its browser called the Mi Browser. Similar to using Chrome or UC browser, the Mi browser displays content along with ads. Xiaomi monetises those ads through clicks and impressions.

Jain confirmed that Xiaomi will also be launching content services in India soon. This content will be up for purchase and will add to the company’s revenue model in the country. The Xiaomi VP also confirmed that multiple other internet-based services will be launched by Xiaomi in India, in the near future.

Given Xiaomi’s recent foray into offline sales, we asked Jain about how the company has fared transitioning from an online-only brand to a brick and mortar brand. Xiaomi started selling phones in India’s offline retail space starting with the Redmi 3s Plus. Jain tells us that the experience in offline sales has been “incredibly good.” He added that in a span of six months, Xiaomi has become the fourth biggest smartphone brand in the offline space. “We are growing really fast. Revenue and sales from offline grew 10X in the past six months. Now we are really pushing forward to further grow an offline business and have a market dominance in the offline segment,” Jain said concluding the interview.

During the course of the conversation, Jain touched upon Xiaomi’s Android One strategy and shared details on its future plans in India. You can catch the entire conversation in the video below.

Realme 10 Pro+ launching in India: Here are its top 3 features
Infinix Hot 20 5G launched in India with "Shuddh 5G": Here are the phone details
iQOO 11 and Xiaomi 13 launches have been pushed back
List of best smartphones launching in December 2022: Xiaomi 13, iQOO 11, Moto X40, and more
The Xiaomi 13 and Xiaomi 13 Pro will have significant design and camera changes
Advertisements