Beyond the top trumps of specifications, benchmark scores and battery life we have a category called selfie-centric smartphones. As you would know, these smartphones focus particularly on clicking that perfect selfie over anything else. This year, we have already seen more than one phone offering a dual camera setup on the front, which goes to show that at least some of us are focused on selfies alone.
Having said that, we wanted to find out whether there’s a noticeable difference between the two extremes of this category. Considering its low cost and mass market appeal, we have taken the Xiaomi Redmi Y1 representing the cheaper end of the spectrum. On the other side we have a phone that has set the standards for selfie shooters, the Oppo F5.

So, without further ado, let’s begin.

Selfie taken in normal light
When seen separately, images taken from these two very different smartphones do look somewhat similar. However, once we started comparing, it is easy to see that the skin tones produced by the Xiaomi Redmi Y1 are a little warmer compared to the one taken by the Oppo F5. 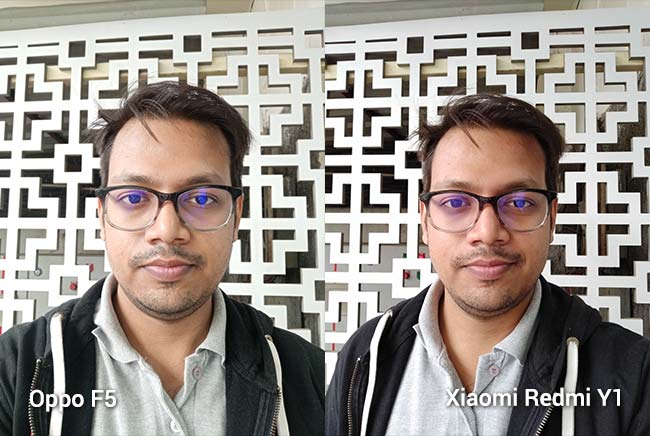 If we look past the higher resolution count of the Oppo F5 (20MP), the Xiaomi Redmi Y1 seems to be doing decent job for its price. There is a visible difference in details, but apart both images look equally vibrant and usable.

Selfie taken with fluorescent lighting
The images start to differ as we moved to artificially lit settings and more difficult shooting conditions. Here, the image has been taken under a fluorescent light, which is in the background. Still, both phones manage to capture the subject well. That said, the Xiaomi Redmi Y1 fails to capture colours correctly. Check the colours of the sweater, colours on which seems to be dull and way off the natural tone. 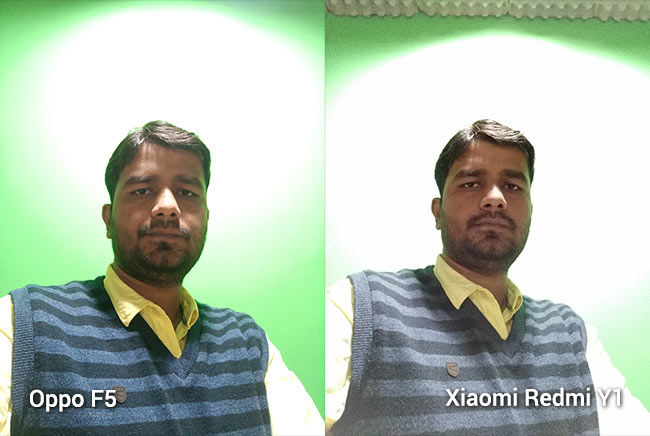 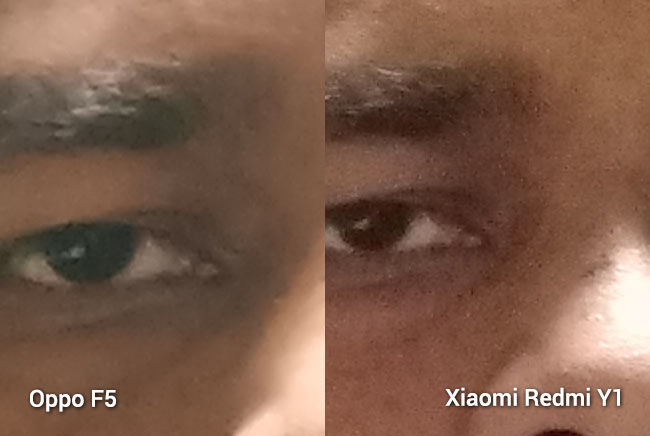 Moreover, there is visible lack of details. On the other hand, the Oppo F5 does a better job in presenting the overall scene, while also keeping colours as true to source as possible.

Selfie taken in incandescent lighting
The same results are replicated to some extent in this image as well. The Redmi Y1’s tendency to add a warm tone to the image is quite apparent here. Compared to the Oppo F5, there is some visible noise in the image taken by the Redmi Y1, but it seems like a minor compromise given the price. There are ample details in both images, but you can easily see that there is a difference between the image quality of the two phones. 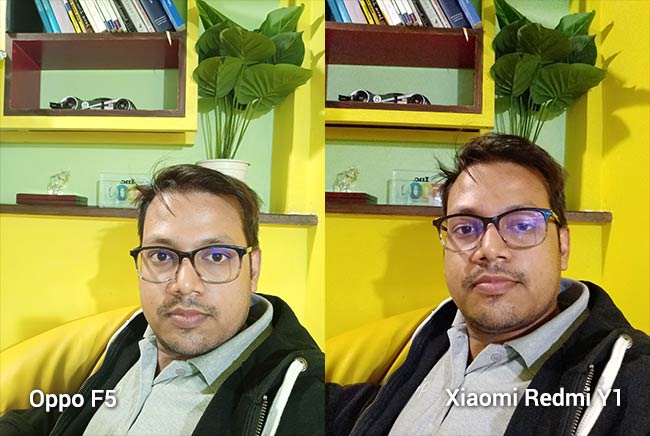 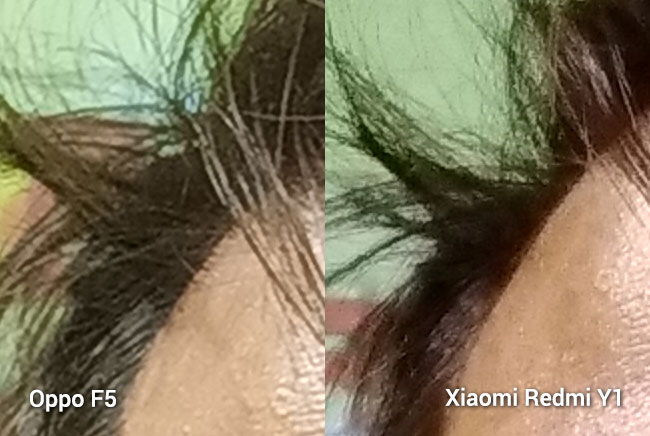 Two subjects at different distances
Here, the Oppo F5 uses its AI to blur the background. As a result, the user in the background is blurred too, since the algorithm deems the background unimportant. That’s actually poor implementation of AI, since an intelligent algorithm should ideally be able to recognise all the subjects.

It is also somehow easily deterred by the varied lighting conditions between the two subjects and ends up lowering the ISO to 183, hence lowering the exposure and making the whole scene look darker than it is.

The Redmi Y1 on the other hand, captures the image at higher ISO (of 500), blowing out the background. In their respective processes though, both phones introduce almost similar level of grain to the image. The point being, neither of the two do justice to either subject in this test.

Low light: With and without flash
The difference in image quality between the two cameras is easily visible when you move to low light situations. The image taken by the Oppo F5 looks brighter and with more details, even though both cameras have clicked the images at 3200 ISO. The Redmi Y1 has visible noise in the entire image, making it almost unusable. The image taken by the Oppo F5 on the other hand has decent detail levels and seems usable. 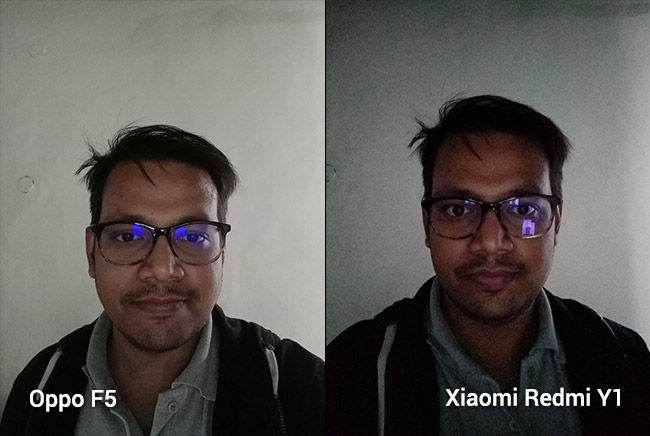 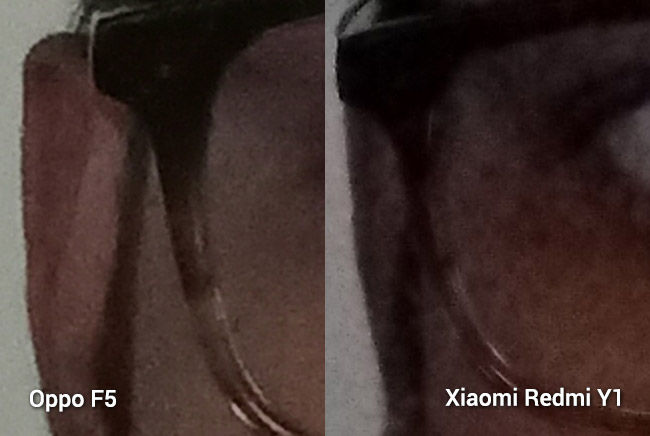 To click that selfie during the night, both phone have a selfie flash. While the Oppo smartphone uses the display itself as a flash, the Xiaomi Redmi Y1 uses a dedicated front facing flash. Here again, Oppo shines brighter (pun intended) than the Redmi Y1 and provides better colour reproduction. The best part is that the using the screen as flash provides ample coverage of the scene, capturing better details than its competitor here. The Redmi Y1’s flash though blinding, does not add any desirable change in the image quality. 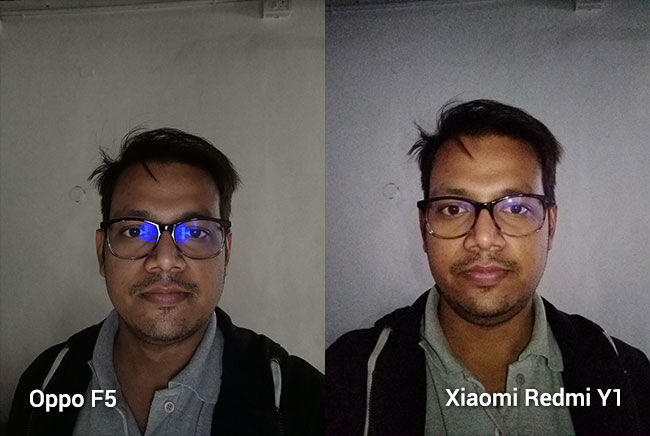 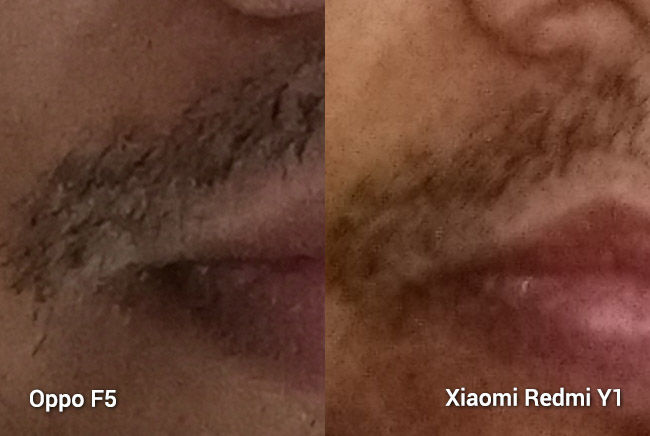 Beauty mode on
Finally, the beauty mode. Since both of these are selfie centric smartphones, both offer to make your skin tone lighter, face slimmer, etc. We don’t like the feature per say as front facing cameras have make faces softer by default, and these two are no different. Still, we used beauty mode with the setting dialled all the way up. The details, colour saturation and even the facial features are altered in the name of making you pretty. If you compare though, the Oppo phone does a better job again, but the Xiaomi Redmi Y1 is not far off. 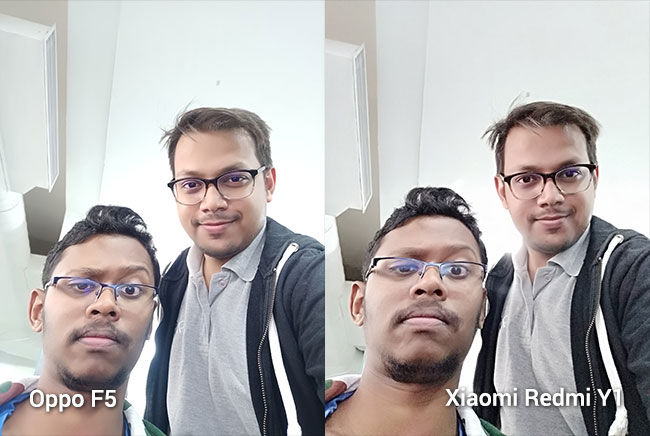 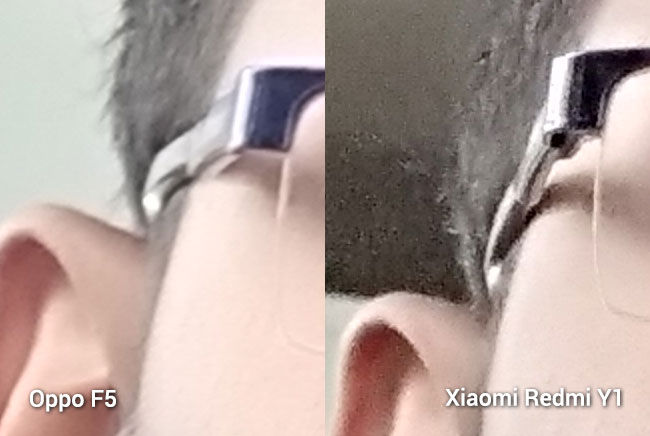 Overall, it is quite evident that having a better selfie centric smartphone will help you take better selfies, but at the same time the Xiaomi Redmi Y1 comes out to be a really good selfie focused smartphone for the price. The Oppo F5 on the other hand has its pros and will be liked by selfie enthusiasts. It has various modes, including background blurs and can even take images in HDR. Hence, it would be right to say that if you are interested in selfies, you can’t really scratch out the Redmi Y1, but phones like the Oppo F5 are indeed superior.