Poco F1 is not the only smartphone to block HD streaming, no Xiaomi device can stream Netflix in HD 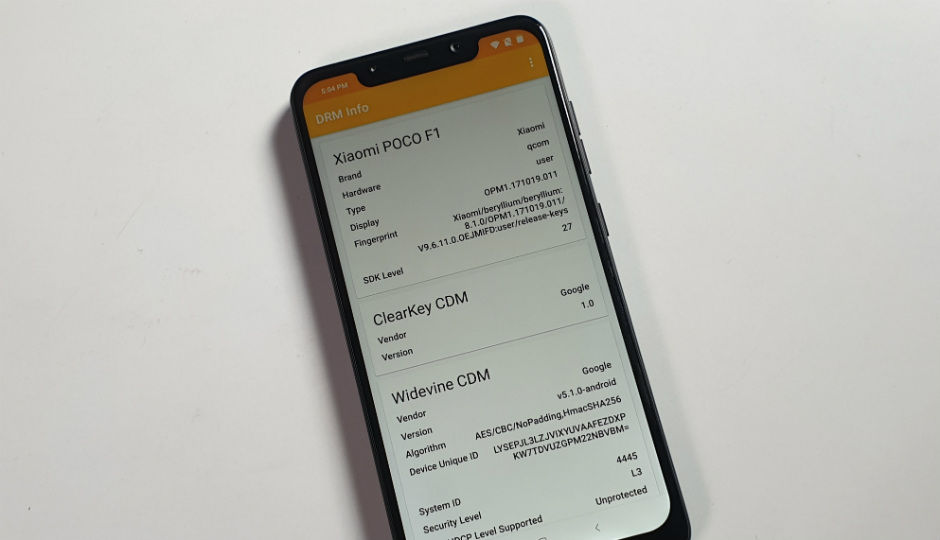 The Xiaomi Poco F1 (review) has a nasty surprise. Despite having a Full HD display, it doesn’t let you stream high definition content over Netflix or Amazon Prime. The information came in last week when a blog called Android Pure noticed Netflix videos don’t have the HD sign on top of the content it presents in that quality. The story, unfortunately, is not a new one. It was similar to what was found in the OnePlus  5 and 5T last year. The problem gets further compounded because the fix isn’t as simple as sending a new OTA update. OnePlus had to recall the units back to apply the required certification to allow HD streaming. Upon investigating, it became clear that most (if not all) Xiaomi devices cannot play HD content from these streaming services. The Mi Mix 2, the Mi A2, the Redmi Note 5 Pro, the Mi 5, even though all of them have the displays to support full HD videos. What is the issue then?

The underlying issue here is a lack of certification. Turns out, Netflix and other streaming sites rely on a Digital Rights Management (DRM) encryption scheme made by Google themselves called Widevine. This is to prevent piracy and unauthorised distribution of the content. It is one of industry’s oldest DRM standards and is estimated to have been installed in around 4 billion devices. Widevine enforces the standards through three levels — L1, L2 and L3. In order to stream Netflix or Amazon Prime content in HD, a smartphone needs the L1 certification.

Widevine uses a combination of CENC encryption, adaptive streaming quality and licensing key exchange to protect the content from being pirated. In order to meet the L1 standards, the device has to do all that within the Trusted Execution Environment (TEE) of the processor. All Cortex-A based chipsets have this in the name of TrustZone that creates the necessary hardware separation allowing Android to create a TEE for DRM. L2 requires only the licensing key exchange to happen within the trusted zone and not the video processing. While L3 is certified to devices that either doesn't have a TEE or when everything is done outside the secure layer.

Interestingly, there is no license fee to implement the technology. Google gives away the certification for free. As a result, it's not cost-cutting that prevented Poco from getting the L1 certificate.

Hardware makers need to pass a certification process that includes multiple legal agreements, software libraries, and testing to verify support to third parties. In fact, it's a streamlined process as almost all chipsets have the required technology to implement it. It's unclear why Xiaomi doesn't have L1 certification on all their devices.

However, since the L1 certification requires the trusted environment to be activated, it cannot be fixed via an OTA update. That’s why OnePlus had to recall the devices. In case of Poco, well we don’t have an answer and neither does Poco or Xiaomi. We reached out to the company (Xiaomi and Poco) with a detailed questionnaire and they refused to comment in an official capacity.

Interestingly, it’s not just the Poco F1 that can’t stream content in high definition. Turns out, all the Xiaomi devices we looked into didn’t meet the required standards. The list of devices we tested are as follows:

None of these devices have the required certification. Furthermore, most other Honor phones also didn’t meet the necessary standards. The Honor Play, Honor 9N, Honor 10, and the Honor 9 Lite also didn’t have the L1 certificate. This means, it’s not  just Xiaomi that’s locking out HD streaming experience, it’s other OEMs too. That said, phones likes the Nokia 6.1 Plus, Asus Zenfone 5z, Asus Zenfone Max Pro M1, LG G7+ ThinQ and the OnePlus 6 all had the required certification. Even Huawei’s P20 Lite and the Nova 3i has the ability to stream HD content.

What could be the case for this fragmentation?

I learnt that when the devices were conceptualised, Xiaomi didn’t consider the fact that people would demand the ability to stream HD content. Which is why the company didn’t spend resources to do the necessary implementation and testing to meet Widevine’s L1 standards. This isn’t an official response and is based on a conversation I had with a Xiaomi employee at the sidelines of Wednesday’s Redmi 6 series launch in New Delhi. Frankly, it seems like Xiaomi is misleading its users. On one hand, the company is making devices with full HD resolution displays, but on the other hand, users are prevented from making full use of it.

Even while reviewing these devices, we took for granted that since a phone has a high-resolution display, it will automatically stream content in that resolution, which is why it went unnoticed during our testing for so long.

The fact of the matter is that as a consumer, you’re losing out. Despite having a display that supports high-resolution content, OEMs are not allowing you to watch them over the internet. In a country like India which is undergoing a bandwidth and content boom, it certainly raises a lot of eyebrows. Thanks to Reliance Jio, high-speed data is more affordable than ever and streaming giants like Netflix and Amazon Prime are pouring money to grab a larger share of the mobile-first market. In such a situation, can the country’s number 1 brand afford to devoid its users of something they paid for?

Whether Xiaomi will issue a fix is not known as of now. Even without the required certification, the Poco F1 and most other Xiaomi devices are considered good value for money for the features and the hardware they offer. Unless you’re going to rely solely on your phone for your streaming needs, the absent certification shouldn’t be a deterrent in buying the phone. The Poco F1, with all its weaknesses and issues, is still the cheapest Snapdragon 845-powered phone and is a beast when it comes to gaming.

MIUI 14 changelog tips details about the new features for Xiaomi phones
Xiaomi 13 and iQOO 11 to launch on December 8: Here are their newly leaked specs
iQOO 11 and Xiaomi 13 launches have been pushed back
OnePlus has announced 4 Android OS updates for select phones coming in 2023 and beyond
List of best smartphones launching in December 2022: Xiaomi 13, iQOO 11, Moto X40, and more
Advertisements