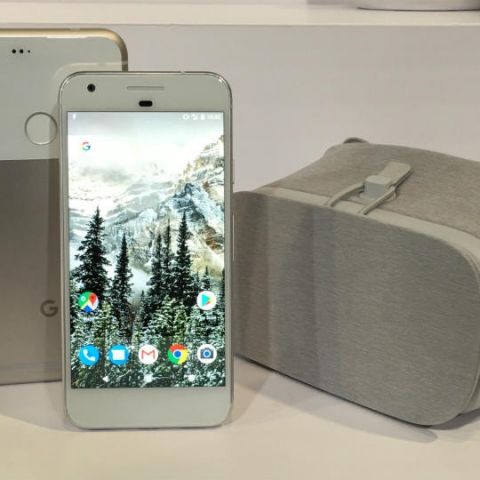 Do you remember when Google unveiled the first Nexus? Wasn’t it a nerdgasm experience when we heard what the device could do? Sure, it was no iPhone but the possibilities seamed endless. Think about it. If you have been following tech news for a few years now, you have undoubtedly been awed by a Nexus smartphone. For me, it started with the Galaxy Nexus which Samsung made for Google and my second favourite Nexus has to be the LG Nexus 4.

For all its Nexus devices, Google relied on third party OEM’s to manufacture these phones. We have seen device manufacturers like Huawei, LG, Samsung and HTC make Nexus smartphones. With the Pixel phones however all that is changing. The Pixel phones are made by Google for Google and catering to benchmarks set by Google. Does this mean Google will compete with other smartphone makers? The short answer is yes, and the fact that Google makes Android too means that they will have an advantage over OEMs. 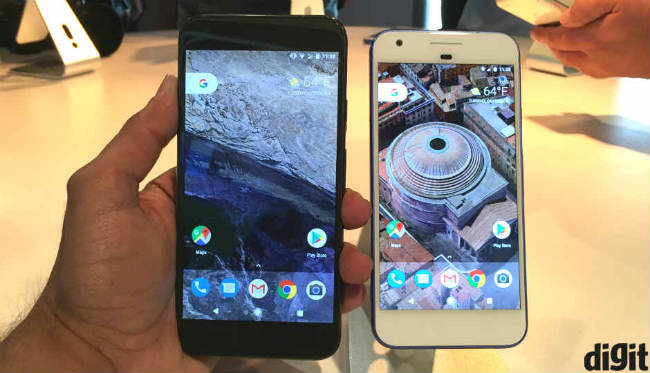 Pixel XL on the left, Pixel on the right

So how are the Pixel phones you ask? Well, simply put I am as awed with the specs and initial performance of the device as I am put off by the price. Kicking things off with the specifications, the hardware powering both the devices is the same with the difference being the battery, screen size and resolution. The Pixel has a 5-inch 1080p AMOLED display and is powered by a 2770mAh battery where as the Pixel XL has a 5.5-inch AMOLED display with a 2560x1440 pixel resolution and is powered by a 3450mAh battery. Other specifications of both the devices remain the same. Both come with 32GB and 128GB storage variants. They are powered by the Qualcomm Snapdragon 821 SoC and Adreno 530 GPU. The rear of the smartphones has a 12MP camera with an f/2.0 apertures, phase detection autofocus and dual-LED (dual tone) flash. The front has an 8MP selfie camera.  What’s the price of the device I hear you ask? Well, the 32GB Pixel is priced at Rs. 57,000, the 128GB Pixel is priced at Rs. 66,000, the 32GB Pixel XL is priced at Rs. 67,000 and the 128GB Pixel XL is priced at Rs. 76,000. This means that the Pixel and the Pixel XL are directly competing with devices like the iPhone 7 and 7 Plus, the exploding Galaxy Note 7 and the Galaxy S7, S7 Edge, HTC 10 and the not so successful LG G5 modular smartphone. It’s safe to say that Google has made a premium smartphone and before I go all fan boy and tell you how awesome these devices are I’d like to highlight some shortcomings that can be a deal breaker for someone looking to invest in a flagship smartphone. 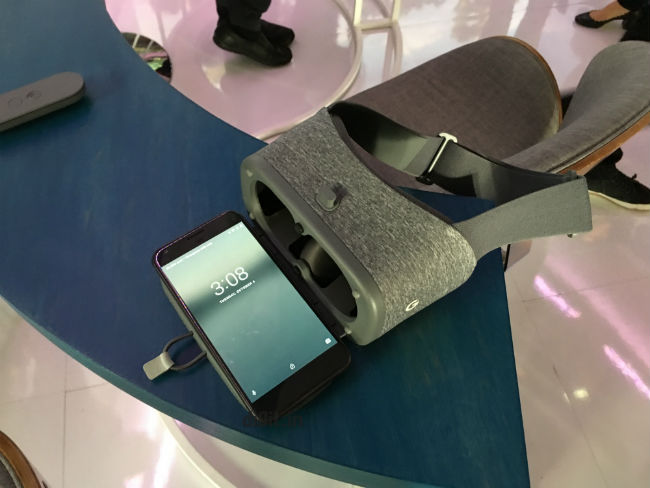 To begin with, there is no MicroSD expansion available and even though the storage is ample, and Google has some interesting cloud storage options, a MicroSD card slot can be a deal breaker for those looking for a lot of local storage. Another shortcoming, and I think this is the most important of them all. The Pixel smartphones are IP53 splash resistant. In a day and age where IP 67 or 68 certification is taken for granted the Pixel phones are far behind. So if by accident, you drop the phone in the bath tub, prepare for a heart attack, on the other hand, the phone can resist light rain or splashes. Last but not least, and I may be nit-picking here – the smartphones don’t boast of a dual-rear camera setup. Don’t get me wrong, I’m very happy that there is no camera bump this time around and the camera is seamlessly integrated into the rear panel but with what the iPhone 7 Plus and the Huawei P9 are offering with their cameras, it looks like the logical evolution for cameras on smartphones. Again, like I said, I may be nit-picking here with the camera, but it’s one more thing Google will have to think about with the next iteration of the Pixel phones.

Since we are on the topic of the camera, lets talk about what’s good with it. To begin with, the camera is fast. Really, really fast. From loading the app to clicking pictures, the camera is faster than the Flash (you know, DC’s super speedster). Another cool thing about the camera is its burst mode. It’s insanely quick. I clicked about 30 pictures in under 4 seconds and that’s just amazing. There is an algorithm at play here which tell the user which are the best photos clicked during the burst mode or you can choose from them manually. There is also an animation that’s created once you click pictures in burst mode to show you your clicks. For those wondering, the Pixel phones camera is powered by the Sony IMX 378 sensor. For all those wondering, yes the Pixle phones retains the headphones jack so there is no need to invest in in new headphones or adapters. 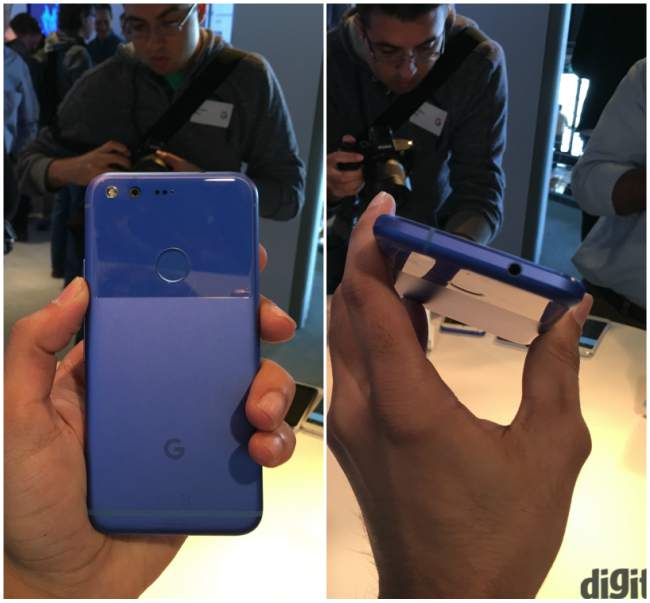 Remember, Google Drive gives you unlimited cloud storage for your photos and videos, but reduces the resolution of the photos to save space. Not with the Pixel phones. With the Pixel phones you get unlimited storage for the photos and videos you click with the phone at full resolution and if you are an avid photographer, that is reason enough to consider this device.

Moving on to other interesting aspects of the phones – the colour options available. I don’t like the white and silver colour combination at all. The black, well, its black. The one that really caught my eye was the Blue Pixel phone and my heart broke when the announcement was made that the blue variant wouldn’t be coming to India any time soon.

Coming to the design, build and ergonomics, the device is extremely comfortable to hold in one’s hands. Yes, it has a big chin and forehead like the iPhones but its extremely comfortable to hold to click pictures, type messages and generally navigate the device. The only reason I’d put a case on it is to protect the back from getting scratched. Speaking of the back, the upper half, where the Nexus Imprint rests is glossy and a fingerprint magnet whereas the bottom half is metal and feels premium. Coming to the display, its AMOLED and one that you will fall in love with instantly.

Google says that the response time of the display on the Pixel smartphones is 25 milliseconds faster than the Nexus 6P. Now this may not seam like a lot on paper but when you use the device you realise how smooth it is.

Speaking of the OS, the Pixel Phones are running on Android 7.1 Nougat the highlight of which is the Google Assistant. You may have met this assistant if you gave Google Allo a try and now it’s a dedicated app on the Pixel phones. You launch the assistant by long pressing the home button and you can have a natural conversation with it, just like you did on Allo. One thing to note here is that the Google Assistant is exclusive to the Pixel phones for now and there is no information or confirmed date as to when the feature will be available on third party OEM devices. So if you have an HTC or a Samsung phone, you will have to use Allo to experience the assistant. Another new feature to the Pixel phones is the launcher which will feel familiar to Android.

What more can I say about the Pixel phones without being in awe of them? Personally, at first impressions, I think the phones are fantastic. I am especially in love with the Pixel, because the form factor is perfect. But for those of you looking for a large screen, you can consider the Pixel XL. The device will cost you a kidney for sure but is a dream for me that’s just out of by grasp. I will miss the fact that Google isn’t making “Nexus” phones for the masses and I don’t like the fact that Google is calling their smartphone family “Pixel”. Especially since Pixel was their failed line-up of Chromebooks. But if Maruti can revive the Baleno name by turning a sedan into a premium hatchback then why can’t Google revive the Pixel name with some state of the art smartphones? I for one am looking forward to spending some quality time with these devices. Stay tuned for the Digit review which you will see soon!