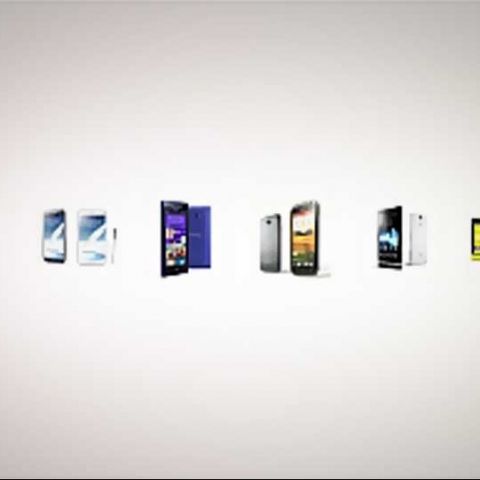 Buying gadgets around the festival of Diwali is the best time across all 12 months in a calendar year. Not only because the best deals are rolled out at this time to woo the consumers, but also because a lot of new products are launched in the month leading up to the festival.

If you have been smart and saved up cash for this time of the year, shopping should be a lot of fun. Since we don’t wish a headache upon you though, we are developing a series of buying guides for the auspicious season, starting with a list of the best phones you can buy.

Understanding that each and everyone of you has different desires and requirements from their smartphones, we have endeavoured to list the best devices, across all price points, so that all you need to do is to identify your budget, and go ahead with your purchase – satisfied that your new smartphone will not let you down.

If you would like to pick up a budget smartphone and still have a premium experience then the Karbonn A18 is the device for you. To start with you get a 4.3-inch IPS display with a resolution of 480x800 pixels. Under the hood, a 1GHz processor and 512MB of RAM power it. The best feature of the device is that it runs on stock Android and has no skin ensuring a smooth experience. The battery life of the device too is quite good. With above average use it should last you a day and a half with absolute ease.

The icing on the Karbonn A18 cake is the fact that this budget smartphone supports dual-SIM capabilities. The rear of the device may feel a bit plasticky and phone is easily susceptible to fingerprints as well as scratches but these are acceptable flaws if you consider the overall package at hand. The device also supports video calling via the 1.3MP front facing camera and has a decent 5MP rear-facing camera. The stock camera app on the device has enough features to help you feel like a great photographer. If you are looking for your first budget Android phone, the A18 should definitely be on the top of your list. You can read our detailed review of the smartphone here.

If you want to test the phablet waters this Diwali and are not so inclined towards the Samsung Galaxy Note II because of its hefty price tag, you can take a look at the Micromax A110 Superfone Canvas 2. The device of course won’t have the bells and whistles of the Note II, but it is an impressive device nonetheless. To start with the 5-inch display has an IPS panel with a resolution of 854x480 making it quite an attractive display. It also sports a 1GHz dual core processor, 512MB RAM, and 2.5GB of built-in storage that’s expandable up to 32GB via a microSD card. The rear houses an 8MP camera, which performs surprisingly well.

The A110 runs on Android 4.0.4 ICS but Micromax has customized the device with its own icons. Anyone who is familiar with Micromax smartphones will feel right at home here. A majority of the interface is stock Android that is a very good thing. The device also doubles up as your portable media player as it plays videos and multimedia (including games) quite smoothly. Staying true to Micromax tradition, the A110 supports Dual-SIM (GSM), but only one 3G and the other 2G. For a budget of Rs. 10,000, the Micromax A110 can definitely be considered as your first phablet.

Regardless of what may be said about Blackberry phones, they are still very popular with the young crowd, particularly for the Blackberry Messenger. The Curve 9220 is the most inexpensive Blackberry out there, unless you can still find a unit of the Curve 8520 somewhere!

If you have an outer limit of Rs 20,000 for a smartphone, we would direct you towards the HTC Windows Phone 8S. Straightaway, the build quality impresses, particularly with the price tag in mind. The 8S looks and feels much more expensive than it actually is.

The HTC Windows Phone 8S’ spec sheet is impressive too – it features a dual core 1GHz processor on the Qualcomm S4 chipset, 512MB of RAM, a 4-inch display with Gorilla Glass, and the latest Windows OS for the phone. Some may claim that 512MB is less, but that would be true for Android but not Windows Phone! On a budget, this is the phone you should consider, because on the same specs, Windows 8 Phone OS would offer a better experience than Android.

In case the HTC One X is not on your list, the Xperia S will surely appeal. The looks are rather unique, and the overall build quality is something we cannot stop raving about. With the Android ICS update, the initial grouse about the older OS has been solved as well.

The Xperia S offers stable performance, a good display and a UI skin that doesn’t hinder performance like some of its rivals’. The 1.5GHz dual core processor is helped by 1GB of RAM, a 4.3-inch display (1280 x 720 pixels), 32GB on board storage space but no memory card slot. This is a decent mid-range Android phone among the ones currently available in stores. Check out our detailed review of the Sony Xperia S, here.

When launched, we were rather perplexed why the HTC One S was priced so close to the One X. However, a couple of price revisions later, this is slam bang in the middle of the price bracket it should have been in the first place.

The fastest Android phone in this category, the HTC One S has a chassis that has been put together very well. It boasts of an impressive spec sheet as well, with a dual core processor, 1GB of RAM, 16GB internal storage and a 4.3-inch (960 x 540 pixels) display. There is no slot for memory expansion though. Buy this, because this seems like the perfect all-rounder. Check out our review of the HTC One S, here.

This is without doubt most powerful conventional Android phone money can buy at the moment. The Galaxy S III's benchmark tests are the fastest among all quad-core smartphones in the market. The initial hype about the PenTile display is something we did not get too bothered about, and quite rightly so, because now that the phone has become so popular globally, even the critics seem to have forgotten about cribbing regarding the display.

The Galaxy S III’s chassis is plastic, but the materials used are high quality and the feel is very premium. Quite a few interesting features as well – pop-up play for multi-tasking and Smart Stay for keeping the display backlight on being some. If Android is what you want, this is the phone to buy. Do check out our review of the Samsung Galaxy S III, here.

HTC brought the 8X to India before Nokia could do the same with the Lumia 920, and full marks to HTC for that. As a phone, the HTC Windows Phone 8X seems to be ticking all the correct boxes – 1.4GHz dual core processor, 1GB RAM, 16GB internal storage and a 4.3-inch SLCD2 display with a 1280 x 720 pixel resolution and the Gorilla Glass treatment.

On the face of it, the Windows 8 Phone OS looks fairly similar to the predecessor at first glance, but there is a lot more going on underneath that. Something that remains unsorted is the apps ecosystem, which is still nowhere close to that of Android and iOS. If you are looking for a Windows 8 Phone purchase to coincide with the Windows upgrade on the laptop, this is one option to consider. Chcck out our detailed hands-on with the HTC Windows Phone 8X, here.

It is not a conventional smartphone, and neither a tablet. This is the category of devices that we call phablet, or smartphone-tablet hybrid. The Galaxy Note II's 5.5-inch display is big, whichever way you look at it. The S-Pen is more useful than you realize at first. The Air-View feature lets you see the test summaries of mails, messages and calendar entries just by hovering the S-Pen over it.

The Galaxy Note II’s performance is staggering thanks to the quad core processor and 2GB of RAM. The display is just brilliant. This comes with Android Jelly Bean on board, something that even the flagship Galaxy SIII cannot boast of! The only thing you really need to consider is whether you are comfortable with this kind of a form factor or not. Do check out our review of the Samsung Galaxy Note II, here.

The latest iteration of the iPhone is here, in time for the Diwali shopping spree. The iPhone 5's bigger display with the higher resolution (1136 x 640 pixels) is truly a step forward from the predecessor’s effort. The storage options available are 16GB, 32GB and 64GB, in white and black colour options. The chassis looks fairly different too, with the two-tone colour finish on the back.

While the A5 dual core 1GHz processor on the 4S was no slouch, the A6 dual-core 1.2GHz processor ensures more power is available to you, rated as one of the most powerful mobile chipsets in the business today. Not without its faults though, because Maps are truly terrible (important information if you use the phone for GPS) and the OS tends to look and feel dated. But then again, someone using an iPhone isn’t usually messed around with!

Jio Phone Next features and launch date: Everything you need to know
Every phone confirmed to launch with the Qualcomm Snapdragon 8 Gen1 chip
OPPO’s Upcoming Flagship Smartphone Will Be One of the First to be Powered by the Premium Snapdragon® 8 Gen 1 Mobile Platform
Samsung Galaxy S22+ and Galaxy S22 to include 50MP Primary Camera: Report
OnePlus 10 Pro will be one of the first Snapdragon 8 Gen1 powered phones: Report
Advertisements