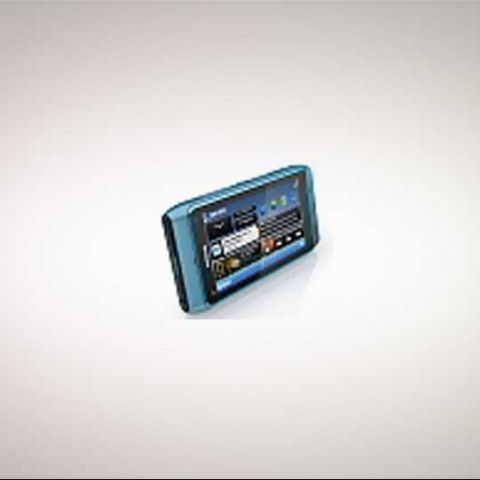 We recently got our hands on Nokia’s upcoming flagship Symbian^3 device, the Nokia N8, which is due to release at the end of September. We’ll be getting a test unit shortly, so stay tuned for our review of the device - a detailed look that will really let you know if the N8 is up to the mark compared to the other top-end smartphones available in the market today, as well as their competing operating systems and interfaces. In the meanwhile, our hands-on preview should whet your appetite … 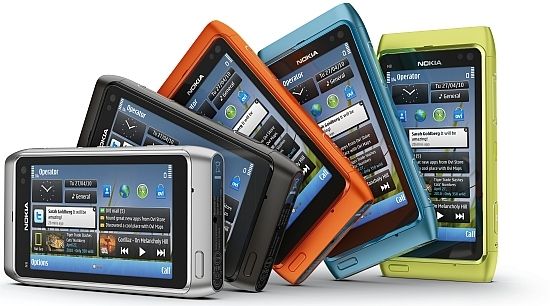 Very well built, the N8’s body is constructed entirely out of aluminium, which is a first for Nokia, who till now relied on plastic, or at most, metal battery panels. It fits well in the hand, comfortably heavy at 135g. The body is completely scratch-proof, excepting the screen, which is scratch-resistant. We tried our hands scratching the body with metal, our nails, and, even if we managed to make a slight mark, it vanished once wiped against cloth.

The aluminium body will be available anodized into 5 different and trendy colours – dark grey, silver white, green, blue, and orange – all in an elegant matte finish.

The N8 features a singular button on the top panel, which is the menu (and program manager) button, placed at the bottom left corner of the large 3.5-inch screen. Some may find the placement of this main menu button to be slightly inaccessible, but we thought it was conveniently placed. On the top right corner of the screen, lies the phone’s secondary camera. On the right side panel, are volume/zoom rocker, screen lock, and the dedicated camera button. On the left, are the microUSB and microSD card slots, covered well with their own plastic, body-coloured seals. On top is the port for HDMI-out, a 3.5mm audio jack (both input and output), and the power button.

On the back panel of the N8 lies an extruded rectangle that contains a Xenon flash, the phone’s speaker, and the famous 12MP camera, which has already made a very solid impression with everyone who’s ever seen Nokia’s sample videos and images. While we weren’t allowed to upload any of the photos/videos we took with the phone during our hands-on time with it (as the models we used were still prototypes, and not the production pieces), we can safely assure you that the images and videos we took were outstanding in their clarity, colour accuracy, and lack of noise when seen on a 40-inch Samsung HDTV display. According to Nokia, the 12MP sensor’s pixels are 47% bigger than other equivalent cameras, allowing for much better night vision, as well as clearer images. The camera also sports a 28mm wide angle lens, which is truly exceptional for a phone’s camera. From our short time with the device, we feel pretty safe to say the N8 would without a doubt get a 9.5/10 in our camera review, setting the mark for all future camera-phones. The sound recorded during the video was also crystal clear, with an exceptional microphone that picked up even the slightest noise in the background. When you use the HDMI cable for video/audio output, the Nokia N8 will also give its users the advantage of Dolby Digital Surround sound, up to 5.1 (the phone will come bundled with a mini-HDMI to HDMI connector, and the HDMI cable will have to be bought separately). The phone's own audio output is pretty good, with the speaker on the back panel providing some rather powerful sound.

As for the phone’s display, we were happy with the brightness and contrast of the AMOLED screen, but unfortunately, were not able to do a sunlight readability test. Perhaps the most shocking aspect about the display however, is its resolution, limited to 640x360. This will put the phone at an overwhelming disadvantage compared to other top-end smartphones out there, most of whom support full 720pHD video playback. It is even more shocking, when you think about the excellent video recording quality of the camera, which is equal to 720p HD at 25fps. The media player onboard will allow the user to play 720p HD video however, which is great only if you are porting it out via the HDMI cable to the television. It does this flawlessly however, as we saw in a video demonstration, which we credit to the onboard 3D graphics accelerator.

The N8 has a monoblock design, and doesn’t contain a user-replaceable battery. It is instead built into the body, ostensibly to extend battery life without the dissipation of heat through the near negligible air space between a conventional user-replaceable battery and its slot. The battery will be replaceable by Nokia Care, unlike some other devices out there, which make you replace the entire piece, and take no responsibility for data lost in the process. The is Nokia’s first such phone with a completely sealed body (to be opened only by an authorized professional), and in case you are worried that you will no longer be able to force switch-off the N8 if it hangs, we were assured that the power button will always react and shutdown the device when held down for a few seconds, no matter if the phone is hung. You’ll have to wait for our review to see if this is actually the case...

Our only quibble with the body of the Nokia N8 was the extruded rectangle on the back panel, which makes it relatively uncomfortable to type with the phone placed on its back in landscape mode, stead of being held in your hands.

Elsewhere on the hardware front, the Nokia N8 scores high with a new feature, called USB On-the-Go, which allows users to directly connect USB flash drives to their phone, without a laptop or desktop as the necessary go between. This will allow you to transfer files with ease, and depending on the weight of the media, even allow you do enjoy some playback directly from USB. For this feature, Nokia will be bundling a microUSB to normal USB connector with the phone. Before you get TOO excited however (it is pretty exciting), there are some limitations to this feature, and you will not be able to directly connect and access a USB storage drive that requires over a certain amount of power from the USB interface to run, and will put many medium-sized external HDD out of the picture. However, those external HDD that are externally powered will run fine.

Speaking of storage, the phone boasts of 16GB built-in space, which is comparable to many of the other top smartphones in the world which also provide microSD expandability. All this puts the total onboard storage at 48GB. No processor or memory specs have been officially revealed as of now, though it is speculated that it hides an ARM 11 680 MHz processor, with 256MB RAM and 512MB ROM. 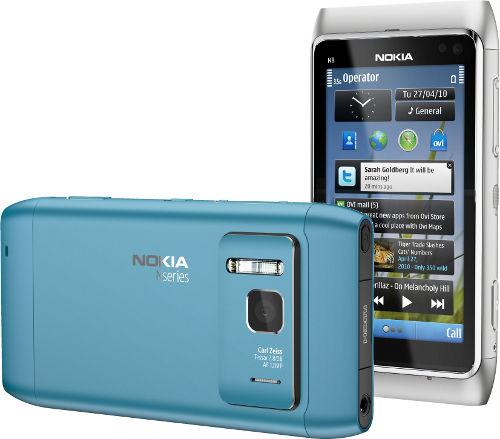 Read on to know more about the phone's interface, on the next page, as well as detailed specifications

The Nokia N8 is the world’s first Symbian^3 phone, a product of a family of operating systems that many now disparage as boring and archaic. According to Nokia though, the intense familiarity is a good thing, enhancing the usability of the phone. Nokia calls the N8 the best N-series ever, with the best ever multimedia features. The S^3 OS is a big part of that, this is what Nokia thinks will make it stand out from the rest…

As for speed, the Nokia N8’s UI is supposedly 3 times faster than the previous best Nokia N-series phone, the N97. This is in no small part to due its onboard graphics accelerator in exclusion to the processor, giving a boost to the GUI, Flash content, and media playback.

The phone has a capacitive touchscreen that supports multi-touch, so if you’ve owned a recent touchscreen smartphone, you’ll feel quite familiar with pinch-to-zoom and other gesture controls. The Nokia N8 breaks away from previous Nokia-Symbian phones with a 3 homescreen layout, each offering customizable widgets and wallpapers. They can be scrolled either by side-swiping, or by clicking the central homescreen touch button, and will wraparound (i.e., from to first, or first to third, directly). They can be customized on site. The UI auto-rotate is responsive, with very tolerable lag when switching orientation.

A great feature of the phone is its access to the WebTV application, which allows users to get digitized content that’s play on demand, free of cost, requiring either a 3G or Wi-Fi connection. Nokia has tied up with several content partners, and will be providing various Indian news, sports and entertainment channels, as well as a smattering of global content providers, direct to phone. Any channel can now use the Nokia N8 and other future phones as a platform, and simply have to digitize their content, with Nokia apparently handling the rest.

As for integration, the latest N-series device will provide native social networking tools with Socials, an Ovi application, which requires a one-time registration to create an Ovi account. After that, Facebook and Twitter are accessible at many points in the UI, allowing users to share and view content, with aggregated contacts worked in via Ovi Contacts. The feature will also allow users to tag Facebook photos directly on the phone, something which was not previously possible. Users can also download dedicated Facebook and Twitter apps from the Ovi Store, which while not requiring an Ovi account, will not give users access to numerous native sharing options, aggregate contacts and a unified inbox. As for mail, the N8 supports push mail service, and it was very easy setting up our mail account into the phone’s native mail application. When we get the handset for review, we’ll give you a more detailed look at its limitations and abilities on this front, for after all, this IS an N-series device.

Coming to the Ovi Store, the Nokia N8 will enjoy unprecedented backward compatibility, for all the apps in the Ovi Store will have ported versions for it, apart from of course, brand new content developed with the Symbian^3 OS in mind. The phone also comes with Nokia’s Ovi Maps preloaded for India and select locations across the world, something the company says will also be a big boon for its customers compared to other GPS services, as the phone will only require a bare minimum of downloaded content (and there for data transfer) to provide navigation. The other bonus with Ovi Maps is of course, “free navigation, forever”.

Overall, the phone is remarkably simple to use, and its interface seems to blend into the background…So, maybe there is something to this familiarity thing…We can’t wait to review the phone for you, so stay tuned to know how the Nokia N8 compares to the flagship smartphones out there, and, how the Symbian^3 OS really chalks up against Android, iOS, and BlackBerry 6 in terms of accessibility and customizability.

Amazon sale is not over, crazy discounts on OnePlus 8T, Mi 10 and more