It's been just 24 hours since Xiaomi announced the Redmi Note 3(₹ 6999 at amazon) in India. The company has received 350,000 registrations in that time, according to India Head Manu Jain, and we have been plagued with requests for this comparison.

Before the Note 3, the LeEco Le 1s was the out and out best performer for the sub-15k segment, doing something that Xiaomi, in fact has been known for. The Le 1s raised the bar for phone that cost so little, and despite all the goodness of the Redmi Note 3, you can't disregard the Le 1s by simply looking at the specs.

There's also the Honor 5X, a phone that many have been intrigued by, and it lays a legitimate claim to the throne of the best budget smartphone. So, while Xiaomi does present mouth watering proposition, and we have been impressed by it in our review, does it beat the competition? Read on for the answer.

While the core design language of all three phones is the same, there are subtle differences which set them apart from each other. That said, the Honor 5X's heavy use of plastic on the front makes it look cheap as compared to the other two, which is why we prefer the other two (design wise) over the 5X. 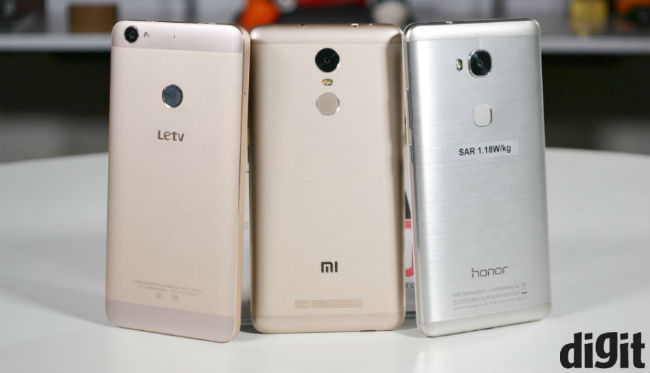 Further, between the LeEco Le 1S and Redmi Note 3, the main difference are in the rounded edges of the Note 3. Both phones are light and ergonomic and the metal feels good to hold. We also have to appreciate Xiaomi's attention to detail, adding the small ridge at the back, to facilitate sound output, and the symmetry maintained between the camera and fingerprint sensor. That said, the LeEco Le 1s seems to us to be a more solidly built smartphone, which is important for most users. It is also thinner than the Note 3.

So, in terms of the design and build, the LeEco Le 1s would be our pick amongst these three smartphone, even though the Xiaomi Redmi Note 3 is not badly designed at all.

In an earlier comparison between the Le 1s, Lenovo Vibe K4 Note and Honor 5X, we had noted how the Le 1s performs better than those two phones. So, the competition here is mainly between the Xiaomi Redmi Note 3 and LeEco Le 1s. 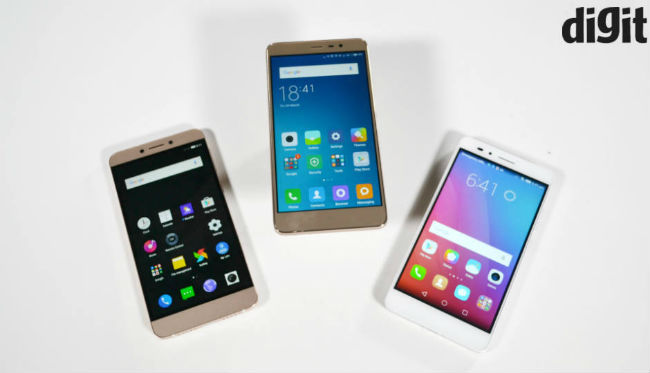 All things considered, when it comes to pure processor performance, the Snapdragon 650 in the Note 3 is just too much for the Helio X10 in the Le 1s. The difference in Geekbench Multi Core scores can be attributed to the fact that the Helio X10 has two extra cores over the hexa-core SD650. While you may think that this gives it an edge, if you consider heat management and the far superior GPU performance, it's a pretty easy win for the Redmi Note 3.

The trickiest test in this comparison has been testing the cameras. Having reviewed all these phones earlier, we haven't been really impressed by any of their cameras. Pitting them side by side though, one realises that they are incredibly close to each other.

Under outdoor conditions, all three phones take pretty good and respectable shots, while both the Le 1s and Honor 5X tend to produce a bleached effect when in images that were taken under bright white studio lights. On the other hand, the low light performance on all these three devices is quite disappointing, which is why we have to call this battle a tie.

The user interface on a smartphone shouldn't just be meant to achieve product differentiation. The Honor 5X, Redmi Note 3 and Le 1s run on Emotion UI, MiUI and eUI respectively, and there are things to like about each of them. However, with features such as Visual IVR, private messasging, hidden folders and more, MiUI took the lead. Xiaomi's UI is also well optimised for its devices, and it looks good as well.

LeEco's eUI makes a lot of changes to regular Android, which gives it a steeper learning curve. While the UI is well optimised, it's main plus points - the Le View and Le Live screens - are still missing from the Indian handsets. As a result, while we do like eUI, we can not recommend it over MiUI at this moment. 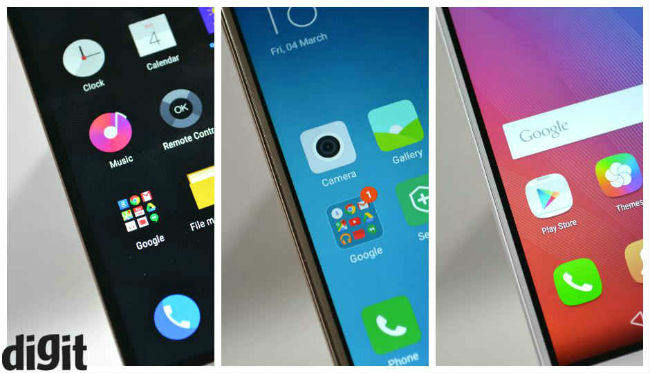 The display on the Redmi Note 3 is bright, but with a slight blue bias, which makes it appear cool. However, the colour tone can be changed from the phone's display settings. The LeEco Le 1s on the other hand, has a dim display when compared to the Note 3, which is why we pick the Redmi Note 3 over the Le 1s. That said, it's worth noting that the Le 1s' display is really good and it is still much better than the Honor 5X. The Honor 5X's display is also quite cool and the touch performance isn't as good as the Le 1s. In fact, the Concore Glass on the Redmi Note 3 does affect its touch performance, but it still ranks above the Honor 5X.

Xiaomi has been quiet for a considerable period now, but as much as we would have loved it to begin again with the Xiaomi Mi5, the Redmi Note 3 is in a lot of ways apt for the company to resurface in India.

Xiaomi's first entry into the market was with the Mi3, in this same price segment. While the Redmi Note 3 doesn't offer the same value, it has raised the bar just like the Mi3 did. With the Snapdragon 650, Qualcomm has made up for all the follies of the 810 and 615 SoCs, and barring the camera, the Redmi Note 3 really has no weaknesses. It is the best performer in this price segment and the phone to beat.