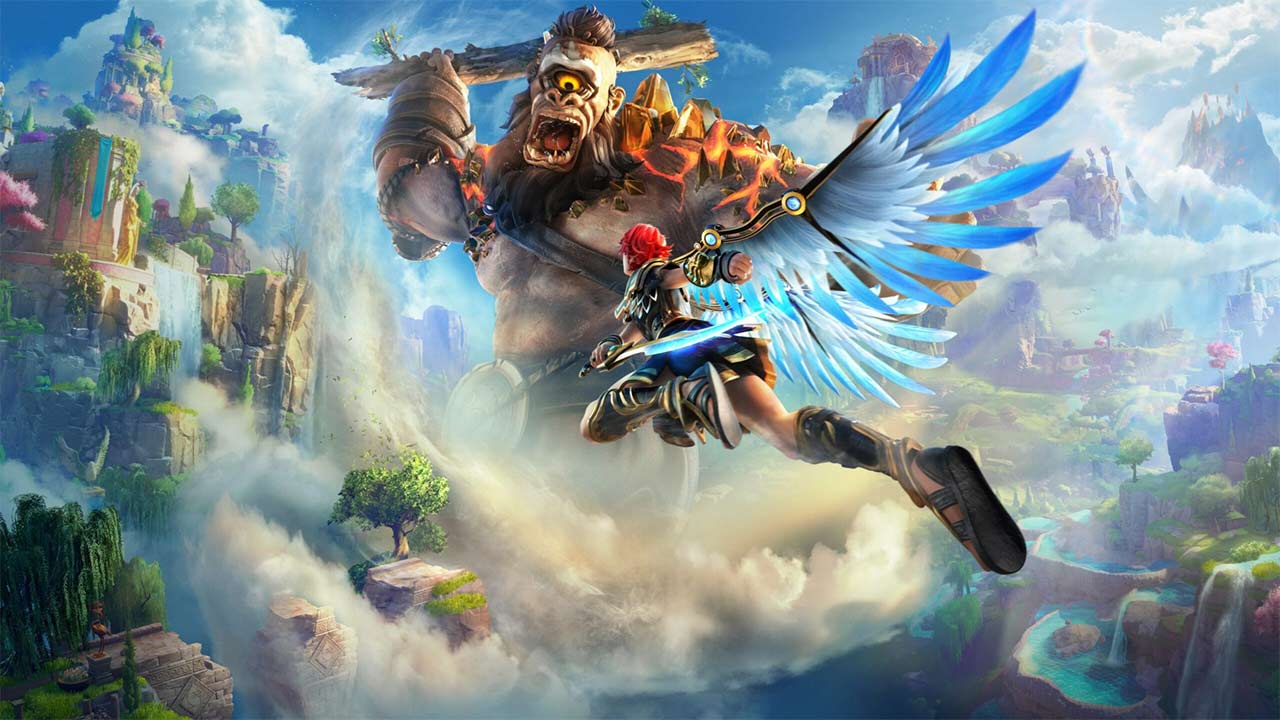 Immortals Fenyx Rising, initially teased as Gods and Monsters, didn’t really excite anyone when it was first revealed. We’ll go as far as saying that even upto the point of its release, not too many people had the game on their radar. Afterall, “yet another open-world IP from Ubisoft, it’s probably just going to be more of the same”. In fact, it’s the third open-world game they’ve released in under a span of two months! So how does Immortals fare? Well, we’re glad to say, pretty damn well. Read on! 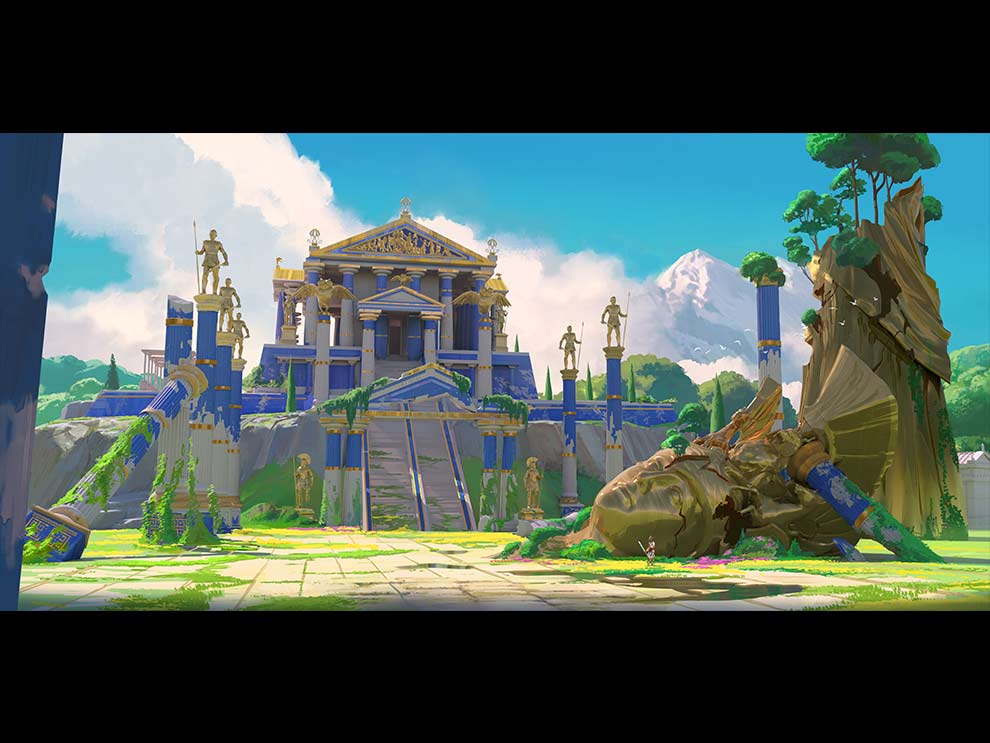 The story of Immortals Fenyx Rising is based entirely on Greek mythology. The protagonist, you, are Fenyx, and your tale is being narrated by Prometheus, the supposed creator of human beings. They’ve done this bit very well; it’s very similar to what we’ve seen in games like Bastion, where the narration depends on what you do in the game. You start off with character creation, where you can choose from a variety of face types, skin colours, and hairstyles and between two body types, male or female; you aren’t locked to a gender. 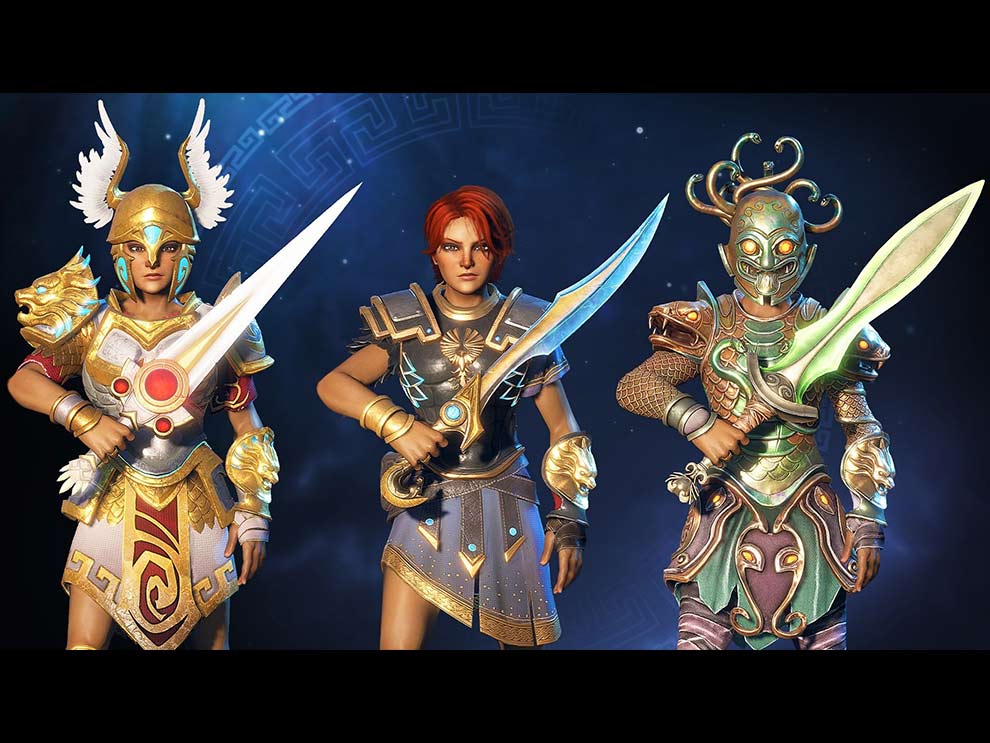 The premise of the story is that Typhon has broken out of Tartarus, or whatever mountain he was being held under. Who’s Typhon? Well he’s a monster whose sole aim is to defeat the gods and rule the cosmos. Clearly, Zeus is not too happy about that. Unfortunately, most of the other gods have been defeated or “handled” by Typhon already, so Zeus has no backup. He has no choice but to go to Prometheus for help. Prometheus is the Titan who created human beings and even gave them fire to defend themselves and evolve. Zeus wasn’t too happy when he did that so he sentenced Prometheus with a rather grisly punishment for all of eternity. It’s important to note that while it all looks and sounds pretty doom-and-gloom, at no point does the game deviate from its lighthearted nature. Right from the moment Zeus approaches Prometheus until the point you’re introduced, it’s well written and hilarious. Throughout the game, you’ll find Zeus making quips about what you’re doing or experiencing. He even makes quips during character creation! Then there are the squabbles between Prometheus and Zeus which are hilarious. It’s easy to just ride this narration all the way through to the end of the game, even if you didn’t happen to enjoy any other aspect of the game.

Coming back to the story, you’re basically tasked with rescuing the Gods from whatever predicament they’re in, and it’s interesting to see Fenyx’s reaction to each of the gods as she encounters them. It becomes very obvious right from the beginning that Fenyx is a huge Greek mythology nerd. Fenyx basically acts as your guide, explaining the many references to greek legends and mythical creatures as you encounter them. It’s also fun to see Fenyx freak out as she comes to terms with the fact that she herself might be in one of those epics.

Gameplay in Immortals Fenyx Rising can be divided into three categories, combat, puzzles and exploration. 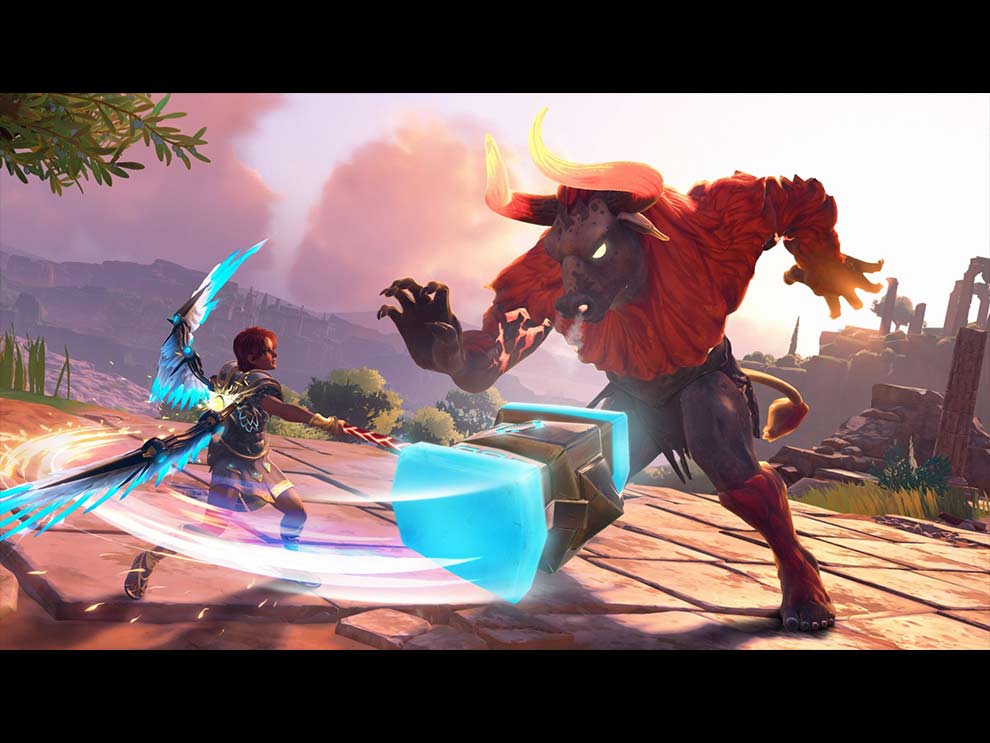 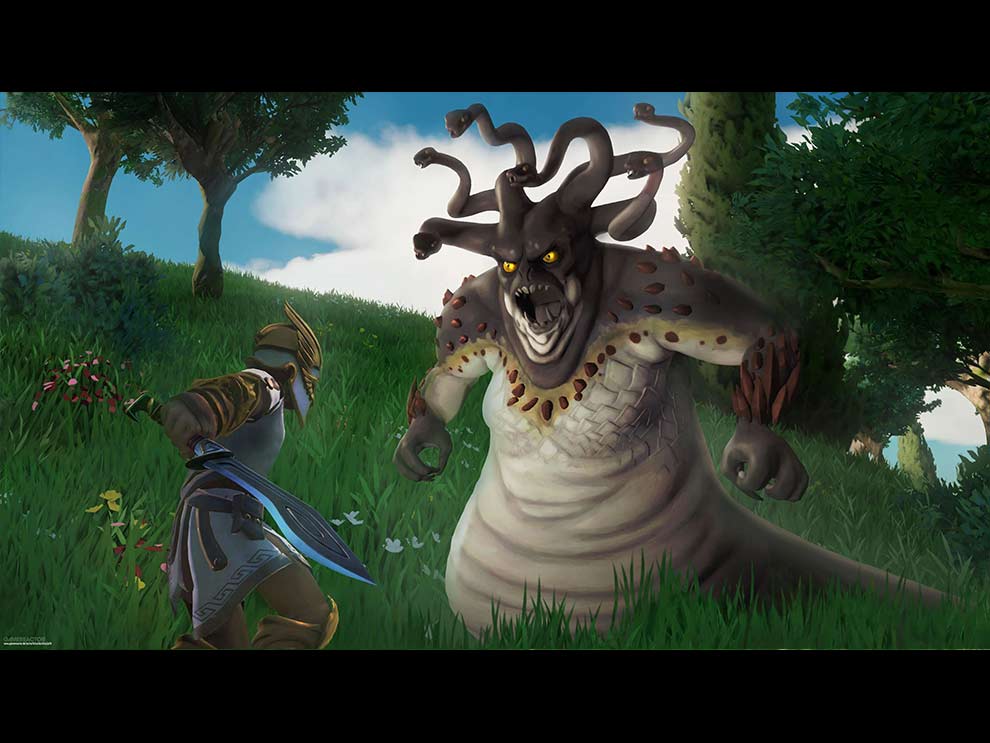 Combat is easily the best part about Immortals Fenyx Rising. It’s fun, fast-paced, and has plenty of variety, giving you plenty of options when it comes to how you want to approach fights. There’s a plethora of weapons to unlock, and a lot of godly powers thrown into the mix as well. Eventually you’ll begin to feel truly god-like. Not like combat wasn’t easy to begin with though. As far as enemies go, there isn’t a LOT of variety, but there’s enough. It’s fun dancing around enemies as you learn their attack patterns. The game has a great combat system in place, with indicators for when to dodge, or to show you which direction attacks are coming from. Plus, it all looks very stylish and flashy, so it's always a spectacle. Immortals has somehow managed to make combat fun, despite not being a challenge. The only real challenge you'll face are boss mobs.

Mixed in with the combat are plenty of puzzles. However, they’re nothing particularly new or unique. Still, they aren’t a chore to do, it’s not like we were dreading the next puzzle we would come across. They're still fun and designed pretty well. Doesn’t imply they’re different from anything we’ve done before though. You’ll be needing to complete these puzzles in order to unlock new armor, powers, abilities, upgrades etc. The puzzles are similar to the kind in Legend of Zelda BotW. For that matter, this game seems to have drawn plenty of inspiration from LoZ, from the combat, to the exploration, puzzles, and even art style. 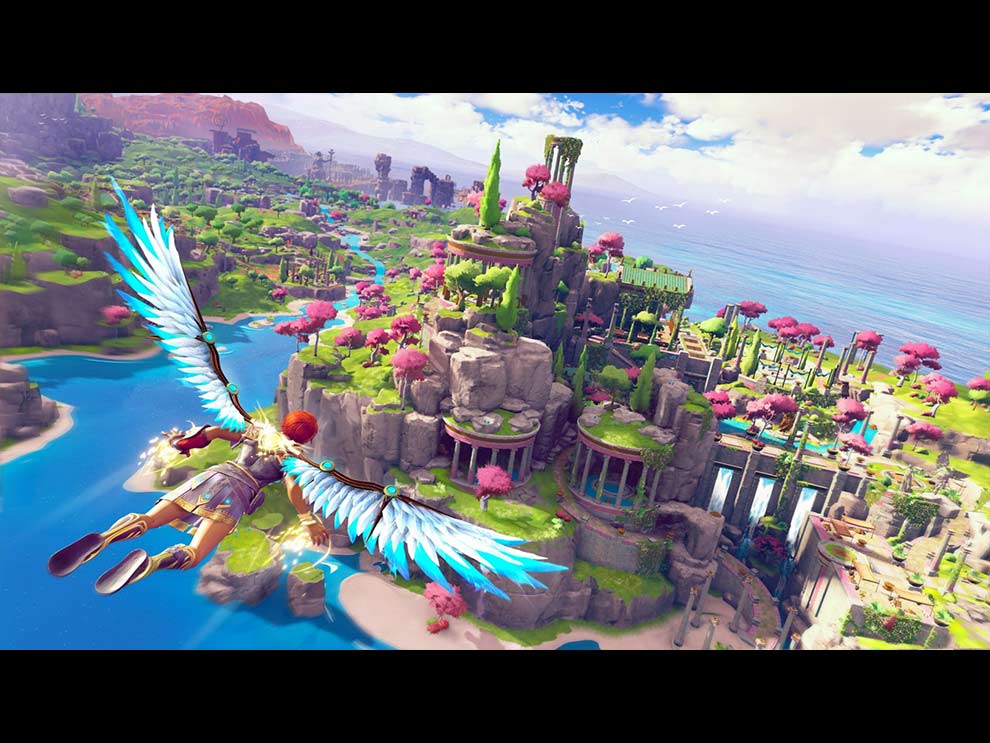 Which brings us to exploration. This is what you’ll be doing when you’re not fighting something or solving puzzles. The world is littered with collectibles, in typical Ubisoft fashion, yet like the puzzles, it doesn't feel like a chore to explore and find them all. We say explore, but the game literally gives you a farsight ability that lets you scout an area and reveal all collectibles before making your way towards them. These range from Vaults of Tartaros, to treasure chests, or ambrosia among other things. This does take away from the exploration aspect, but the completionist in you will have a ball. You have a stamina bar that you need to keep in mind while exploring, but it’s easy to stack up on stamina potions until you’re upgraded enough to not need them anymore. One of the biggest parts of exploration is the use of your wings. Icharos’ wings, which you get at the very start of the game. Initially all you can do is double jump, but eventually you’ll be able to fly and glide around, as you improve the wings. Like LoZ, you can climb just about anything, as long as you have the stamina to make it to the top. Exploration is a lot of fun in Immortals, and a lot of it has to do with how good the game looks. Which brings us to the graphics. 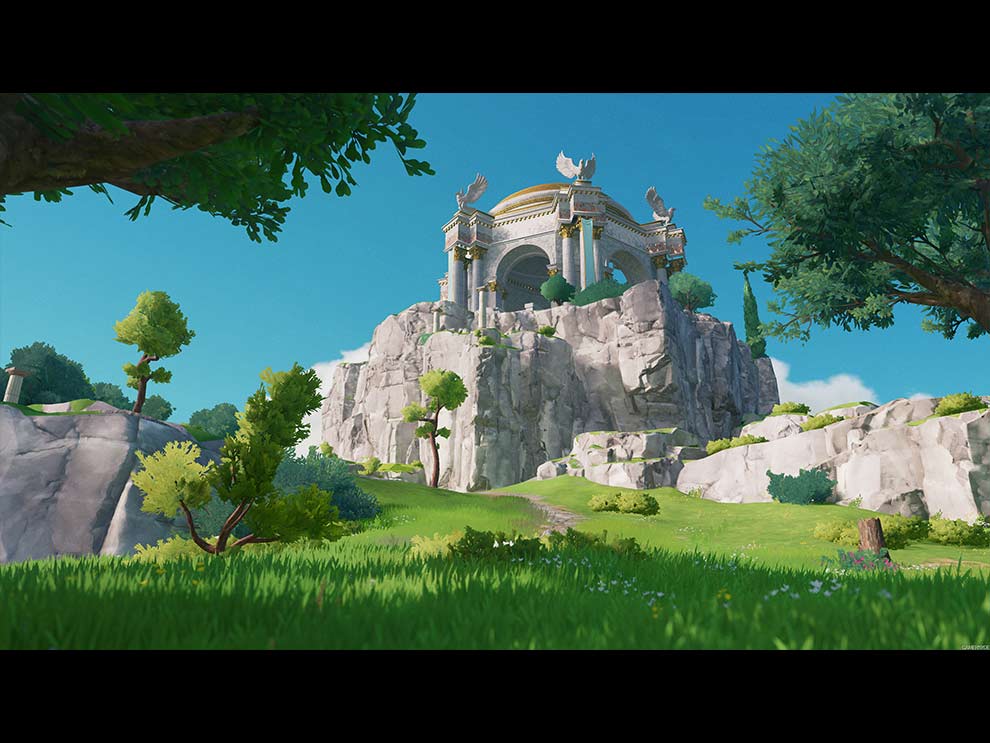 Like we mentioned above, the visuals are very Legend of Zelda inspired in many ways. The Golden Isle has gorgeous landscapes and stunning vistas, and plenty of variety too as you travel from one end of the Isle to the other. One could easily get distracted and spend a minute simply standing on a cliff-side and taking in the views. The game also has a day-night cycle in place. Even the character designs, the monsters, the gods, Typhon, they’re all very well designed, and voice-acted might we add. We’ve already mentioned how good the banter between Zeus and Prometheus is, but the rest of the cast have also done an excellent job.

There is a cash shop

Fortunately, it’s mostly just cosmetic items, and you can easily get through the entire game without even opening the cash shop. As a plus, a lot of the weapons and armor you get in the game itself look pretty nice, so you needn’t worry if you want your character to look fashionable. 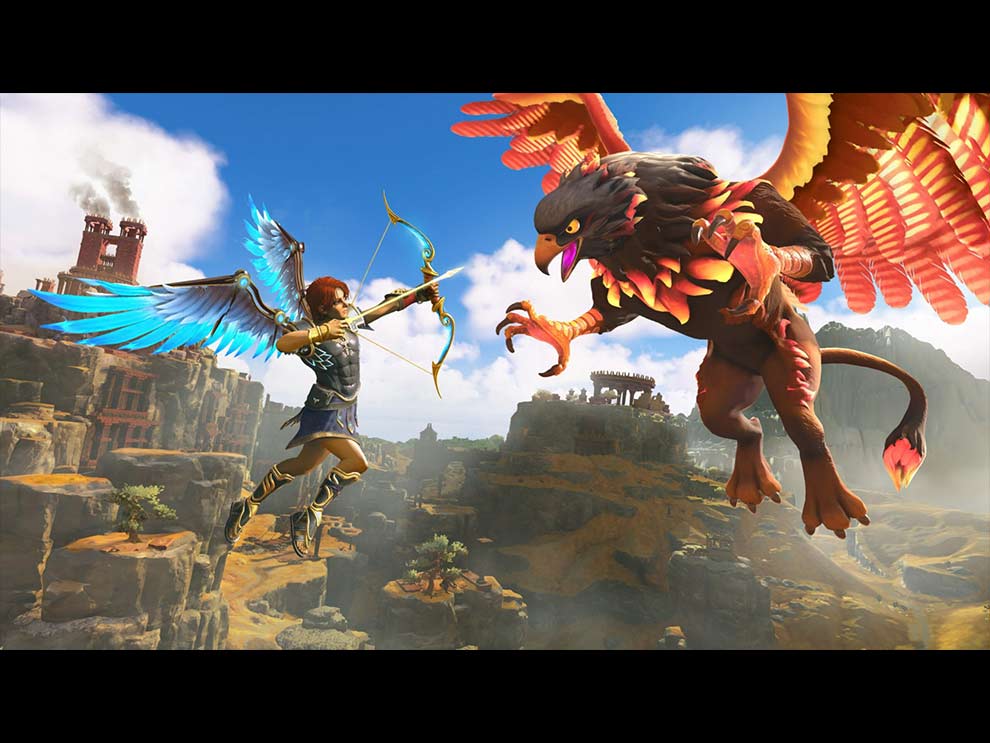 Immortals Fenyx Rising is an open-world RPG that’s full of character and personality. It doesn’t feel bloated, and nothing feels like a chore. At the same time, nothing is too challenging, so you can breeze through the game, which might be an issue for those who’re looking for a challenge. The puzzles, while well-designed, aren’t anything new, and exploration could have been better if we actually discovered things by stumbling across them, rather than marking them from afar and then beelining towards them. The gorgeous visuals do somewhat make up for this though. Overall, Immortals is a fun, lighthearted, open-world adventure to dive into.

We played a review copy of Immortals Fenyx Rising.