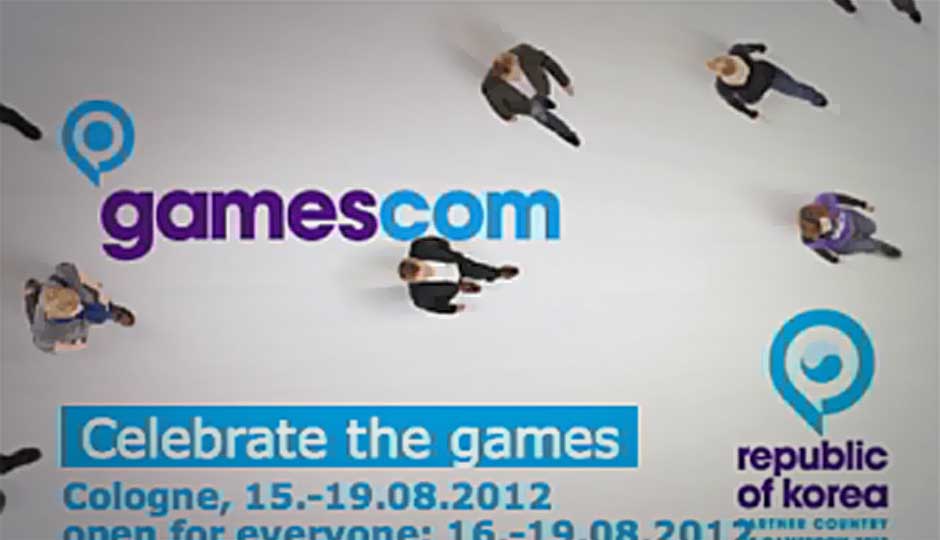 E3 may be considered as the gaming event every year, but that doesn’t mean that there aren’t other events related to the video game industry where major announcements are made.

E3 takes place in Los Angeles, USA, but Gamescom is Europe’s largest gaming expo that takes place in Germany. The event is relatively young as it was started in 2009.

Gamescom 2012 is taking place from August 15 to 19, and we will bring you all the highlights of the event. Here’s day one roundup of all the news flowing out of Gamescom 2012, from Sony's press conference, to announcements and trailers of other multi-plaform IPs.

Sony all the way:

Sony held its press conference on day one of Gamescom and blew us away with a slew of announcements. They are as follows:

To start things off, Sony shows some serious love for its handheld console, the PS Vita that has been in the dark these past few months. Some of the announcements for the Vita are as follows.

Assassins Creed III Liberation: The Assassin on the Vita
Assassins Creed III may be one of the most anticipated games of the year, but the series is also making its way on Sony’s handheld console. The PS Vita version of the game has a new female lead protagonist, Aveline. One of the new features of the game unveiled at gamescom 2012 is her ability to walk into shops and change clothes, a feature we have grown accustomed to in the GTA franchise.

Just like Ezio and Altier before her, Aveline can run on rooftops and assassinate her targets in style. The game also uses the touchscreen and rear touch panel of the Vita to innovate the control mechanics of the game.
Assassins Creed III Liberation will launch Exclusively on the PS Vita in October 2012.

Need for Speed Most Wanted Vita
Calling it one of the best racing games on the Vita this year is a bold statement by Criterion games, the developers of the games, but you have to admit, the studio does have a reputation of making some great racing games. The name Burnout ring any bells?

The Vita version of the game will be the same as its console counterpart according to the developers. If you are a PS3 owner, you can start the game on one console and finish it on the next. At Gamescom 2012, the developers showed off a multiplayer trailer of the game. You can enjoy it below:

Call of Duty: Black Ops Declassified (Vita)
We knew a Call of Duty game was in the works for Sony’s handheld console and we have received the first details of the game at gamescom 2012. The game falls in the Black Ops lineup of the Call of Duty timeline.
The trailer showcases the familiar gameplay that we have all come to love from the Call of Duty franchise and also shows off the multiplayer component of the game.

Call of Duty franchise and also shows off the multiplayer component of the game.

Killzone Mercenary announced for the Vita
Killzone is one of Sony’s flagship first person shooting games for the PS3 and the franchise is now making its debut on Sony’s handheld console, the PS Vita. The announcement trailer gives us a glimpse of the shooter and how it employs the touchscreen mechanics of Sony’s handheld device. No launch date of the game has been revealed.

Moving from the handheld to big brother PS3, Sony’s home console saw updates to some of its most anticipated exclusive games along with the reveal of some all-together new games:

The Last Guardian isn’t dead
Probably one of the most hyped games that left us breathless for more but still hasn't seen the light of day is the Last Guardian. In the past, we hear that the project was going to shut down.

In an interview, Sony Worldwide Studios chief Shuhei Yoshida said the game hasn't been showcased due to a variety of technical issues. The game was officially announced way back in 2009 but has fallen off the gaming conventions radar since late 2011.

We are a little disappointed that the game hasn't been showcased at Gamescom 2012 but the light at the end of this dark tunnel is that the game isn’t dead.

Sly Cooper: Thieves in Time coming in 2013
Sly Cooper has been one of Sony’s platform action adventure game mascots since the days on the PS2. First announced in 2010. The game was originally slated for a 2012 release date but has now been pushed back to 2013. The news of the new release date – Feb 2013 comes from the Gamescom 2012 trailer of the game.

This will be Sly’s first outing on the PS3 and the game is a Sony exclusive. You can enjoy the new trailer below.

Puppeteer: A new Sony exclusive game
Puppeteer is a new game for Sony’s console that is being developed by Studio Japan. According to Sony, “the theater of the strange and fantastic” and aims to “awaken the imagination of all children.”

No details of the game have been revealed such as the platforms or a release date but we will bring you all the information as soon as we hear something.

Another Sony exclusive: Until Dawn
Developed by Supermassive Games, Until Dawn is a survival horror game and is being developed for the PlayStation Move. No further details are available about the game, but we expect it to launch in 2013.

The Last of Us: Alone and Forsaken trailer
An apocalyptic survival game from the stable that brought us the Uncharted franchise, the last of us showed us a glimpse of some new features of the game in this new gamescom trailer. A post apocalyptic city, some hand to hand combat, platforming, traversing and some sneaking.

God of War Ascension multiplayer trailer
When a franchise like God of War announces that it is going to add multiplayer, you can’t help but wonder if the developers are shooting themselves in the foot with this “add on”. From what we’ve seen however, this doesn't seem to be the case. God of War: Ascension Multiplayer Combat Trailer shows a snapshot of the all-new multiplayer mode coming to God of War. With intense 4 vs. 4 objective-based combat that stays true to the heart and soul of God of War, Ascension brings a fresh new look to multiplayer gameplay.

Rain
Another PS3 exclusive, Rain follows the story of a character that can only be seen in the rain. Rain is a third person adventure game, which looks very reminiscent of Heavy Rain. The trailer doesn't give a lot of information about the game nor showcases a release date.

Visit page two to read more about the various multi-platform game announcements made at Gamescom 2012...

After the thunder has settled from Sony’s storm of games, we also got a fresh look at some of the most anticipated multiplatform games.

Assassin's Creed 3 naval warfare trailer
Assassin's Creed III goes beyond rooftop running and slick assassinations. In this Assassin's Creed III Naval Warfare Trailer, gamers can get a glimpse of how they can explore and conquer the open ocean in the game. Navigate tumultuous waters and command your own naval warship, sending your enemies to a watery grave with cannons and an array of naval weaponry.

"Without a decisive naval force we can do nothing definitive, and with it, everything honorable and glorious." -- G. Washington

Far Cry 3 Co-Op Campaign trailer
Far Cry 3 can be listed as one of the most anticipated FPS games for the current console generation. One of the best features of the game is that the campaign can be played with your friends in co-op. We did get a glimpse of this at E3 2012, but at gamescom 2012, Ubissoft has launched a new trailer showing off the co-op features of the game.

Army of 2: The Devil’s Cartel demoed
Army of 2 may not be the best third person shooter co-op game in the market but it was a fun franchise nonetheless. The stage demo of the game shows split screen multiplayer gameplay, and some of the new features of the game such as the ability to provide your companion backup from the machinegun on a chopper.

The demo also shows off some high octave action sequences that look as though they have been pulled out straight from a Michal Bay movie.

Dead Space 3
Visceral games have shown off some new footage to its survival horror game Dead Space 3. The stage demo of the game shows some fast paced action sequences as you once again don the role of Isaac, the lead protagonist from the first two games. The demo also showcases some zero gravity gameplay. From the stage demo one thing is clear, the game will keep you on your toes at every step of the journey.

There is a new in-depth weapon crafting features of Dead Space 3. With a new and upgraded weapons building system, Isaac must scavenge for resources to develop custom weapons. The Weapons Bench allows you to create your weapon piece by piece to engineer the ultimate arsenal to destroy the Necromorph infestation.

Devil May Cry 5's new trailer
When we first heard that the Devil May Cry franchise was getting a reboot we were skeptical. But with the footage we’ve see so far, the game looks promising. At Gamescom 2012, a new trailer was revealed that reveals more about the story than the gameplay. Dante has a twin brother and both the brothers must put their differences aside to save humanity. Enjoy the new trailer below.

Hitman Absolution Contracts trailer
Unvieled at Gamescom 2012, Contracts is a new online mode which allows gamers to create and share their own custom hit challenges within Hitman: Absolution. Choose a level, targets, weapons and then set the rules for completing your contract as you play to create. Hitman: Absolution will also ship with many preset contracts, each designed by the developers of the game, IO Interactive.

Ubisoft’s cute and cuddly platforming hero, Rayman will have his next adventure exclusively on Nintendo’s next generation console. The predecessor to Legends, Rayman Origins was launched on the Xbox 360, PlayStation 3, Vita, PC, Wii.

Nintendo hasn't officially announced the launch date of its next gen console, the Wii U nor has it given out the price points. But we expect to see the console hit store shelves this holiday season, as that is when Rayman Legends is supposedly launching. The Rayman Legends Gamescom 2012 trailer showcases how the new Wii U touchscreen controller will be used to navigate through the game and manipulate the environment.

Here’s how to make the most of the smartphone deals during Flipkart Big Billion Days Sale Previous Post
Acer Nitro 5 2021: Gaming and performance review Next Post