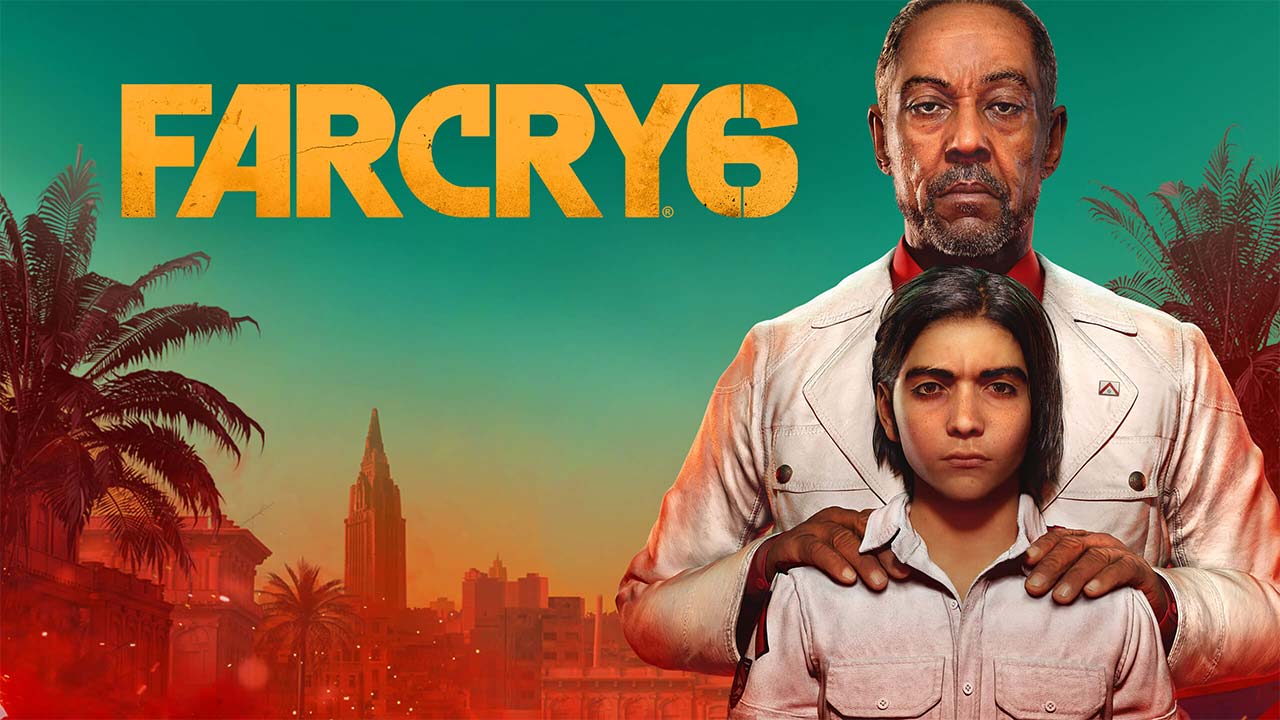 Far Cry 6 review: Once a guerilla, always a guerilla

Far Cry 6 is a Far Cry game through and through. It’s got all the things you would expect from a Far Cry game, and then some. Yara is beautiful and lots of fun to explore, and the story is pretty good.

Far Cry 6 takes us to the fictional island of Yara, a beautiful, Cuba-inspired island which also happens to be ruled by a fascist dictator, Anton Castillo. At this point, everyone knows what to expect from a Far Cry game, at least in terms of gameplay. Understandably, it can get pretty hard to hype a new Far Cry game because of this. Not for Ubisoft though, who pulled out the big guns when they announced that Giancarlo Esposito would be the one playing primary antagonist, El Presidente, Anton Castillo. That definitely put the game on our radar. So here we are, we had a run at Far Cry 6, and here's our review.

Going off of what we said in the intro, Yara is a fictional island in the Caribbean that's ruled by El Presidente, Anton Castillo. His dream is to restore Yara to its former glory, which he plans to do by selling Viviro to the world. What is Viviro you ask? It's a smokable cure to cancer that happens to grow only on Yara. Viviro is farmed and produced by slaves, or as Castillo likes to call them, outcasts and fake Yarans. 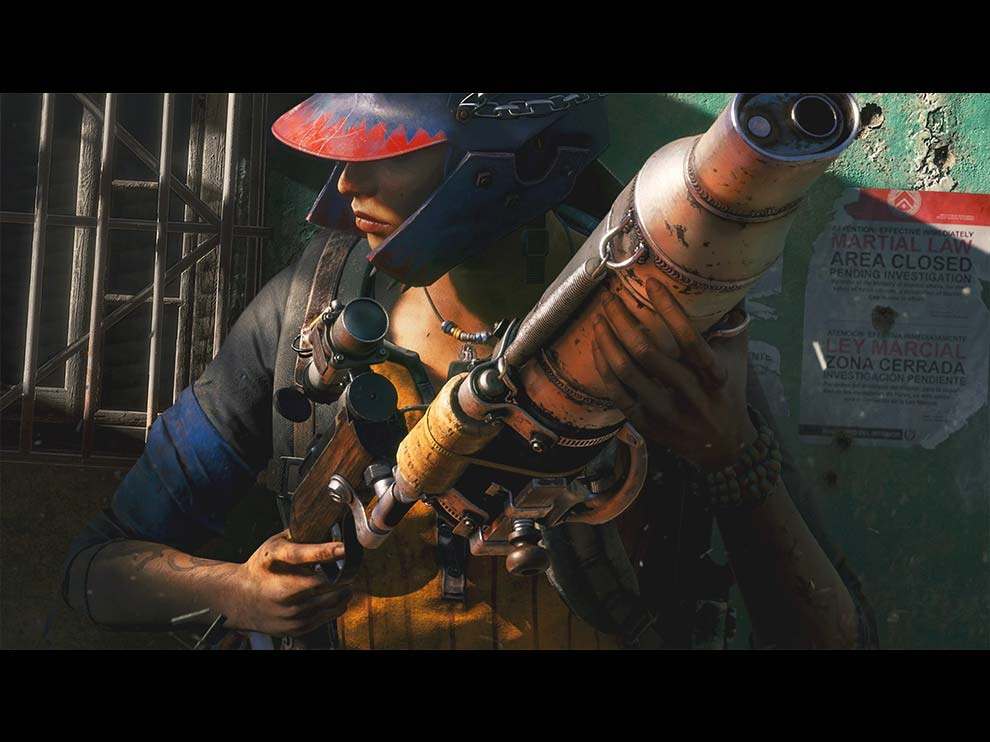 In what is a rather gripping intro sequence, you, the protagonist, begin the game trying to flee from Castillo's tyranny. The game truly begins after your failed escape attempt. You can choose to be either male or female, but your name remains the same either way. Dani Rojas. There's no face customisation either, kinda like in Assassin's Creed Odyssey.

Dani is an orphan, who also served time in Yara's military. This does two things, justifies Dani being able to handle weapons, and also Dani's connection with the people of Yara; he or she knows what the people of Yara are going through. 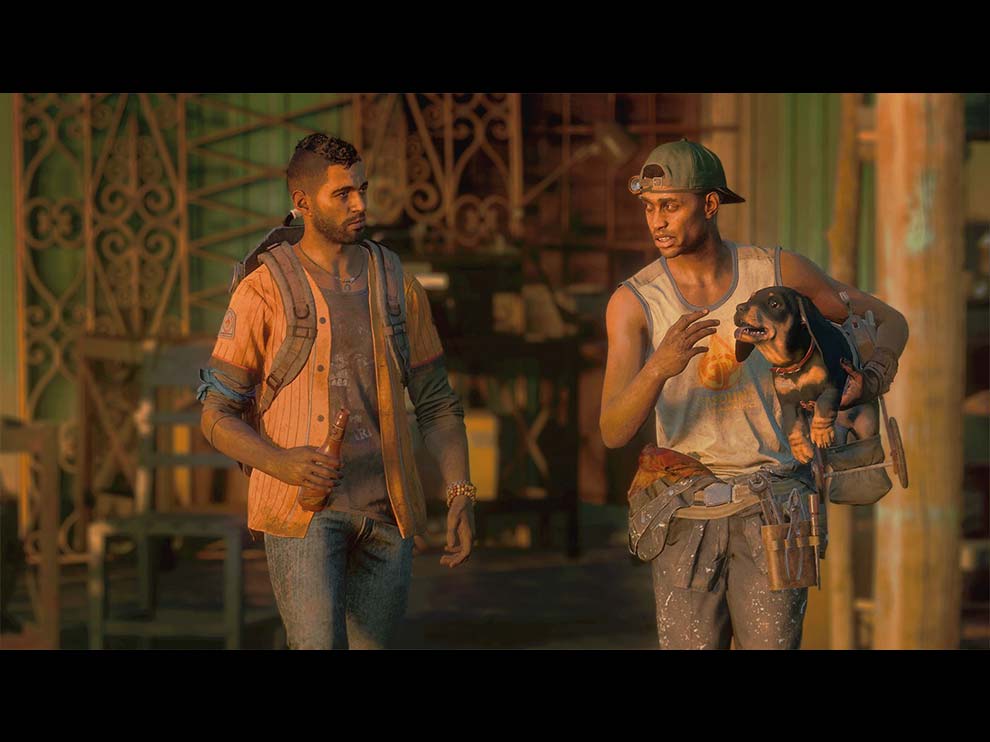 That's about all we'll say about the story in order to keep things spoiler-free. What we can tell you though, in typical Far Cry fashion there are plenty of twists and turns in the story. The story itself is a lot more closely tied to reality compared to other Far Cry titles, some of which even have supernatural elements tied to them. Compared to Far Cry 5's Joseph Seed, Castillo wouldn't seem out of place if he was an actual person in today's world, which in turn puts a spotlight on the kinds of things people like Castillo do in the name of results. Food for thought.

If you've played any Far Cry game, or open-world Ubisoft game recently for that matter, you should already be familiar with all of the game's controls. Sneak up on enemies and assassinate them with your machete, scale cliffs and buildings with a grappling hook, use your phone to mark enemies and glean their weaknesses, etc.

Far Cry 6 also has a stealth mechanic that's similar to the Assassin's Creed games, wherein you can simply holster your weapon and the guards will pay you less heed. Wander too close to them and they'll start to suspect you. Of course, if you're trespassing a high security area, they're not going to think twice.
It wouldn't be a Ubisoft game if there wasn't plenty of stuff to do on the side. There's unique weapons to be found, hunting missions to complete and side quests to pick up. 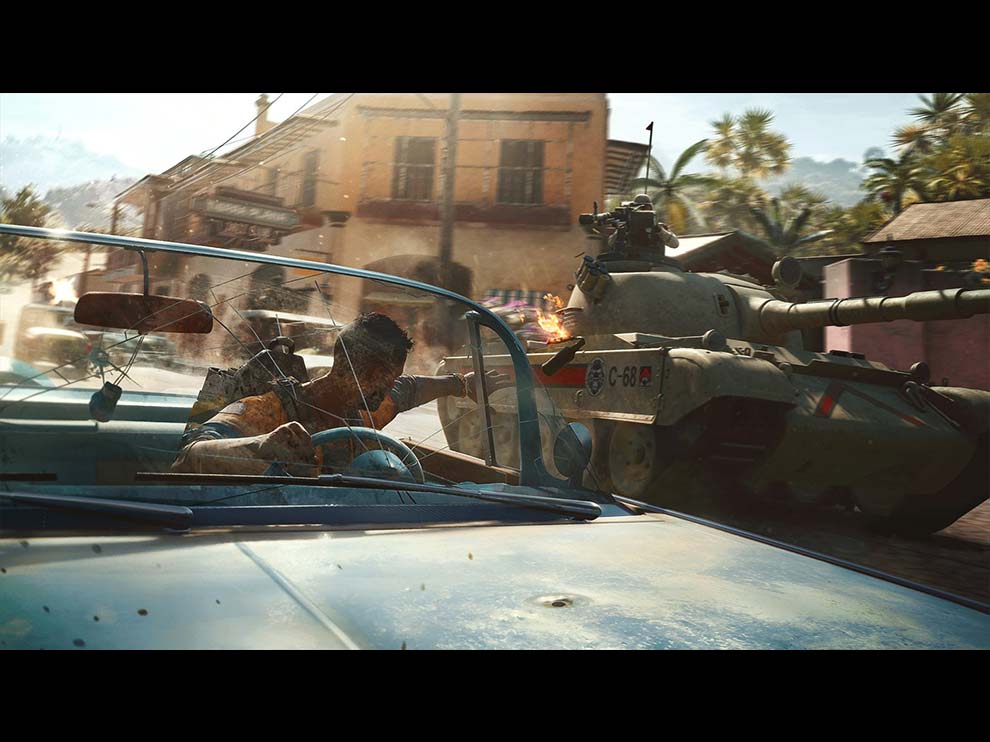 In typical Far Cry fashion, you start out as an underdog with little to no equipment. As you progress through the game you'll start upgrading your arsenal using the trusty old workbench and of course, finding new weapons. Then there's the gamechanger, the Supremo.
The Supremo looks like a defunct jetpack, but it's actually a pretty busted piece of equipment. You start off with a flamethrower and rocket launcher combo which is just as overpowered as it sounds. It's also a massive fire hazard, so be careful of setting yourself on fire while you burn everything else to the ground. You'll eventually be able to unlock more Supremo, including stuff like an EMP, that shuts down security systems and vehicles. Super handy. 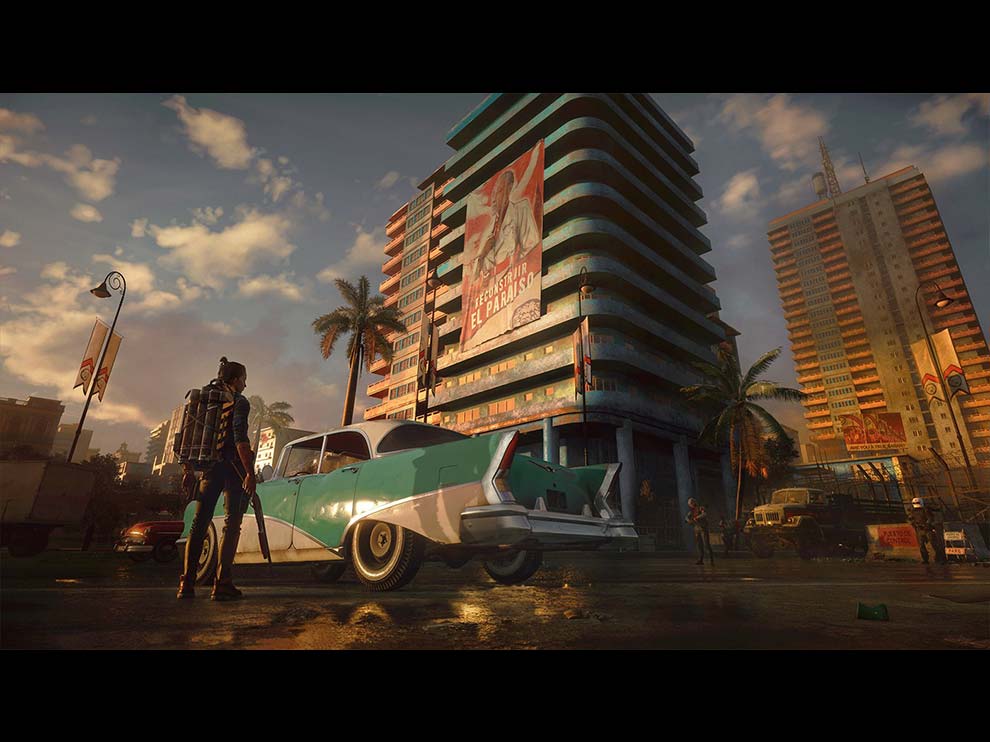 Combat in the game feels smooth and fluid, you can take the sneaky approach or go in guns blazing. You can modify your weapons for stealth or to focus on enemy weaknesses. They can also be customised with some bling, like charms and such. 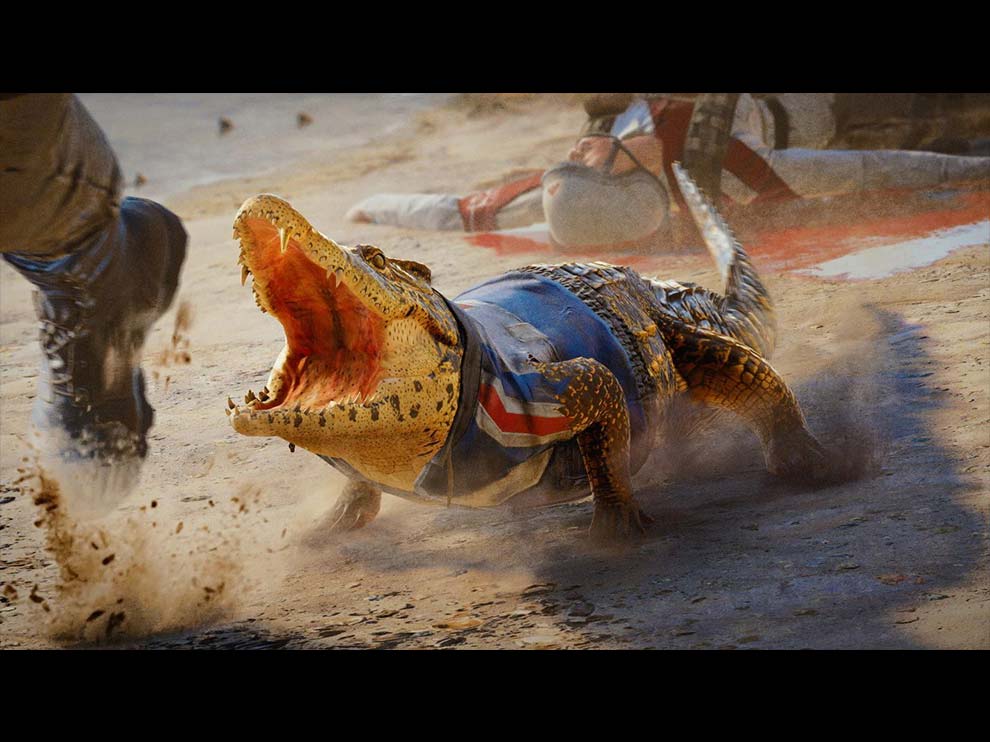 Far Cry 5's Fangs for Hire system also makes a comeback, this time as Amigos. No human followers this time around, but who needs them when you've got Guapo the crocodile following you around. Or Chicharrón the rooster having your back.  Your amigos serve as great distractions, but also do pretty well in combat.
Yara has a lot of wild horses for some reason. Wild horses you can actually ride, which is nice. All wild horses you find can be dropped off at a pick up point, making them available for you to call later. You can pet and feed just about all of the wildlife on Yara, which is amazing. Of course, if horses aren't quite your speed, every kind of vehicle is up for grabs, from land to sea to sky. Driving is not the best experience in the game though, and does feel a bit disorienting.

The game looks amazing, Yara is a beautiful island with beautiful beaches, teeming with wildlife and greenery. We played the game on an RX6800 XT, so we were able to play the game on Ultra settings without any hitches. There was a bit of screen tearing here and there but that may have had more to do with our monitor than the game. 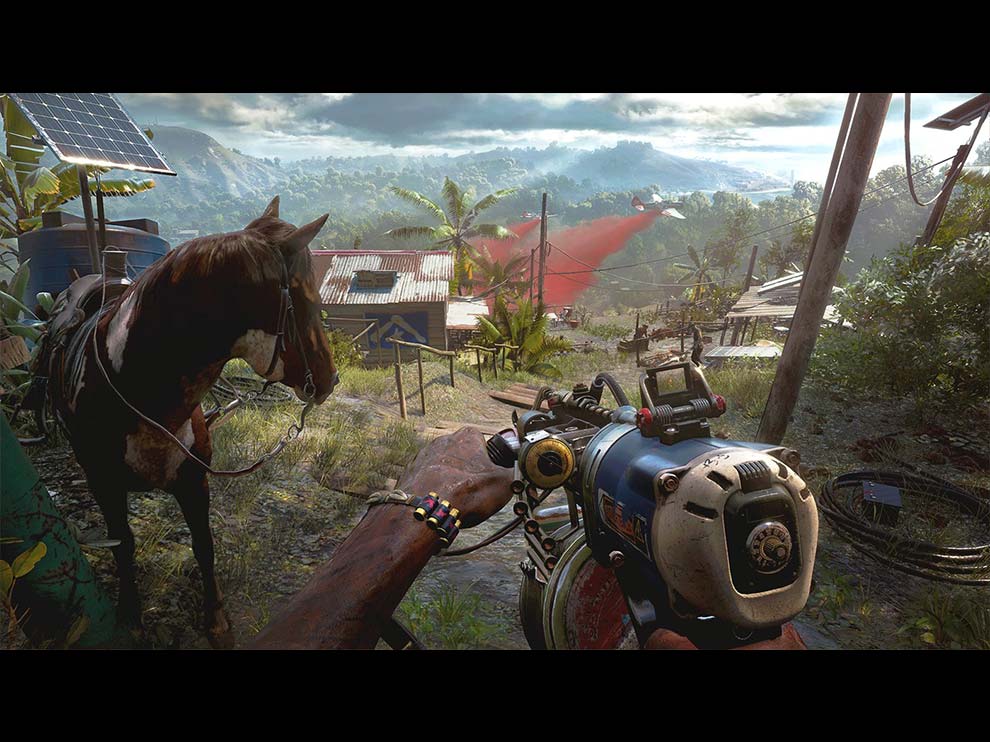 Coming to the audio, you’ve got a pretty generic action-adventure soundtrack that works well with the game. The radios in houses and cars are all blasting upbeat Spanish music that fits the whole beach aesthetic of the game. Then there’s the voice acting which is fantastic. It’s one of the things Far Cry does really well, and they’ve certainly maintained that in Far Cry 6, especially, we don’t even need to say it, Giancarlo Esposito, who plays his role to perfection.

Far Cry 6 is a Far Cry game through and through, which is not necessarily a bad thing. It’s got all the things you would expect from a Far Cry game, and then some. Yara is beautiful and lots of fun to explore, and the story is pretty good as far as Far Cry games are concerned. Overall, if you enjoy the Far Cry format, or open world games in general with a decent but fairly predictable plot, then Far Cry 6 is an easy pick up.