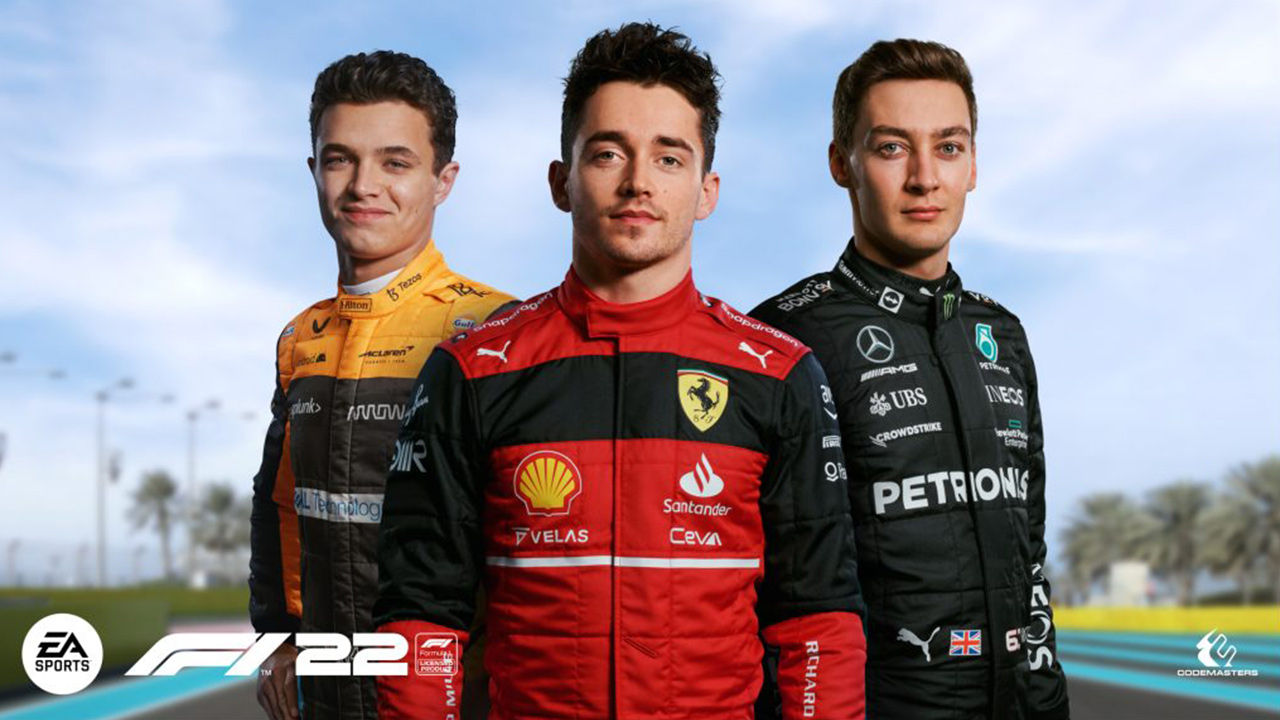 F1 22 brilliantly treads the line between being a full-on arcade game and a super serious sim. It has everything an F1 fan would need and it has most things a racing game fan would need from a game.

The 2022 F1 season has brought a ton of changes to the design and aerodynamics of real-life cars with new rules and regulations designed to improve racing and the following of cars behind other cars. What that means is that the cars now have a different way in which they create downforce and although effective, it’s not in the same league as the cars from the previous generation. While previous generation cars were easier to chuck into fast corners without risking a spin-out, the new cars are a bit tougher to handle. And that brings us to the game version of F1. F1 2022 incorporates all the regulation changes of its real-world counterpart and that's evident in the design of the cars.

We played F1 22 on the PlayStation 5(₹ 49990 at amazon). And as you would expect, the visuals were pretty good. We say pretty good because we didn’t get the chance to test the game out on a decked-out PC with a bonkers GPU. While that may have crushed it in terms of the visuals, the PS5 really didn’t leave you wanting.  Although it must be said that the visuals were very good when it came to the look of the cars while driving in the “far chase” cam mode and when it came to driving in the “cockpit” cam mode. Seriously, the details and textures on the driving gloves and the steering wheel were superb. It’s a different story when it comes to the other aspects of the game though. For example, the virtual avatars of the drivers, while having some resemblance to their real-life counterparts, looked quite plasticky. Almost like a wax model of the real thing. It is clear that the devs have put much more effort into the virtual models of the cars and tracks rather than the models of the drivers. And that’s not a complaint at all. F1 2022 is a serious racing game and well, we’d much rather prefer the effort being put to make the car look more realistic than the drivers. 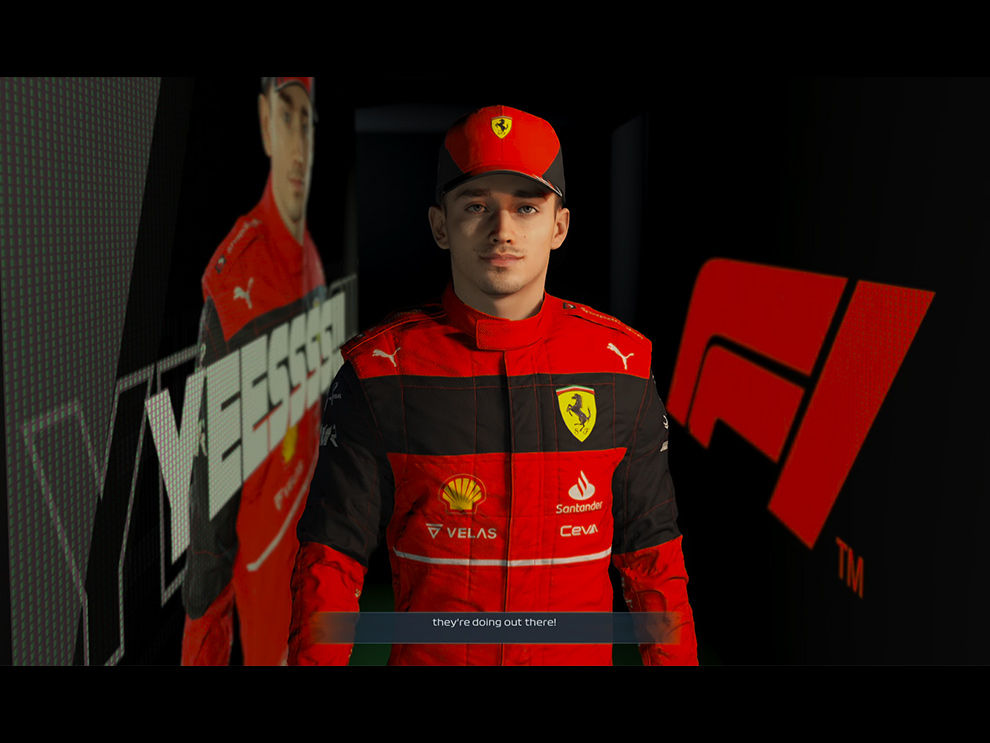 Another issue that we noticed was that the game really didn’t offer much in terms of perception of speed. You are there in the fastest racing machines in the world but even at top speed, it does convincingly convey that you are going at a blistering 300+ kmph. That may indeed be because of the sim side of the game and as enjoyable as sim racing games can be, a game like F1 2022 which is designed for mass appeal could have done with a bit more in terms of the illusion of speed. 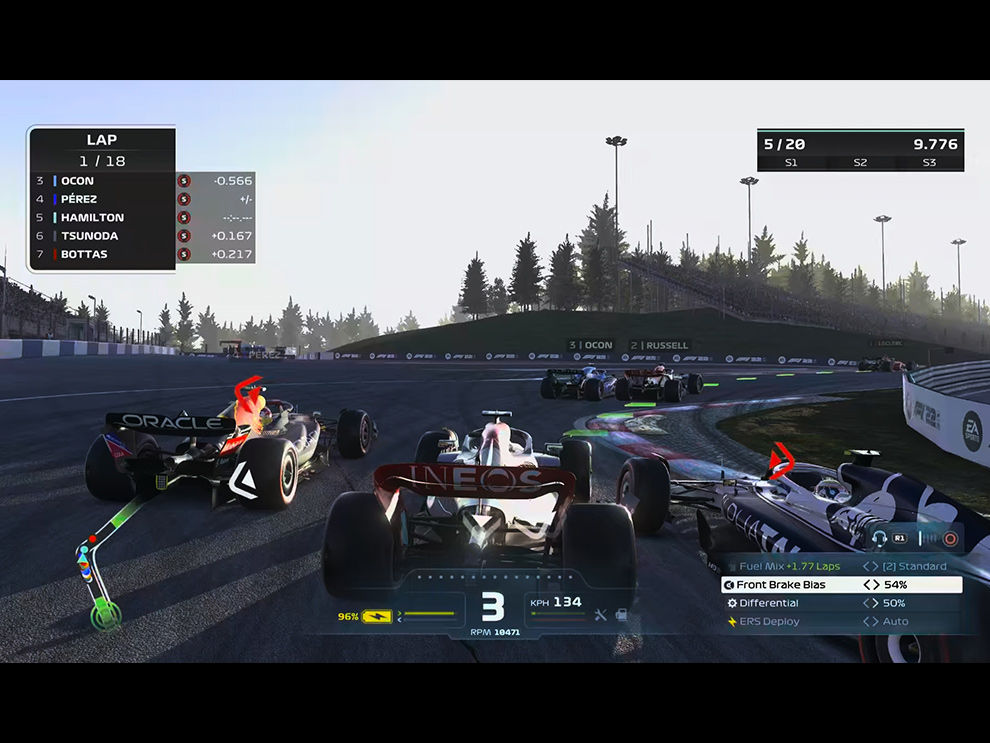 The F1 2022 gameplay is quite similar to the previous generation F1 games as you might expect, apart from the slight changes in the handling and downforce of the new generation of cars. F1 2022 once again toes the line between being a full-on sim racing game and an arcade racing game. This means it will attract gamers from both camps while not being too attractive to hardcore fans. Think of F1 22 as a game specifically developed for fans of the F1 sport who want to get in on some of the action and get a taste of racing an F1 car around perfectly modelled real-world tracks. These F1 watchers may not want to go the full sim route as that requires quite a lot of financial and time investment. Happily, however, for someone picking up the controller for a racing game for the first time will not have much of an issue with racing and being competitive within the game thanks to the finely tuned assists. As you progress through the game and get confident with your steering inputs, throttle and braking, the assists can be reduced gradually and even turned off completely. We noticed that it is a much more rewarding experience resulting in better lap times as well when you start to turn off the assists as the traction control and braking start to interfere less and less. The damage can also be tuned to suit your driving style with it just being cosmetic (which will not affect the performance at all) or simulation where even minor damage can result in reduced performance. It is actually noticeable when you lose the front wing which results in horrendous understeer around long fast corners. The new generation of cars also ride much lower to the ground than previous generation ones so you incur more underfloor damage if you end up riding the curbs. On tracks with more prominent curbs, it's best to avoid them as your race engineer gets into a panic about the “critical” levels of underfloor damage. Although an F1 game, F1 22 also has a couple of other bonus racing options. For example in the Solo game tab, you have the option to quickly race any Grand Prix on the calendar. In that mode you can pick any team and driver you want. You also have the option to keep the performance of the car either realistic or equal for all. 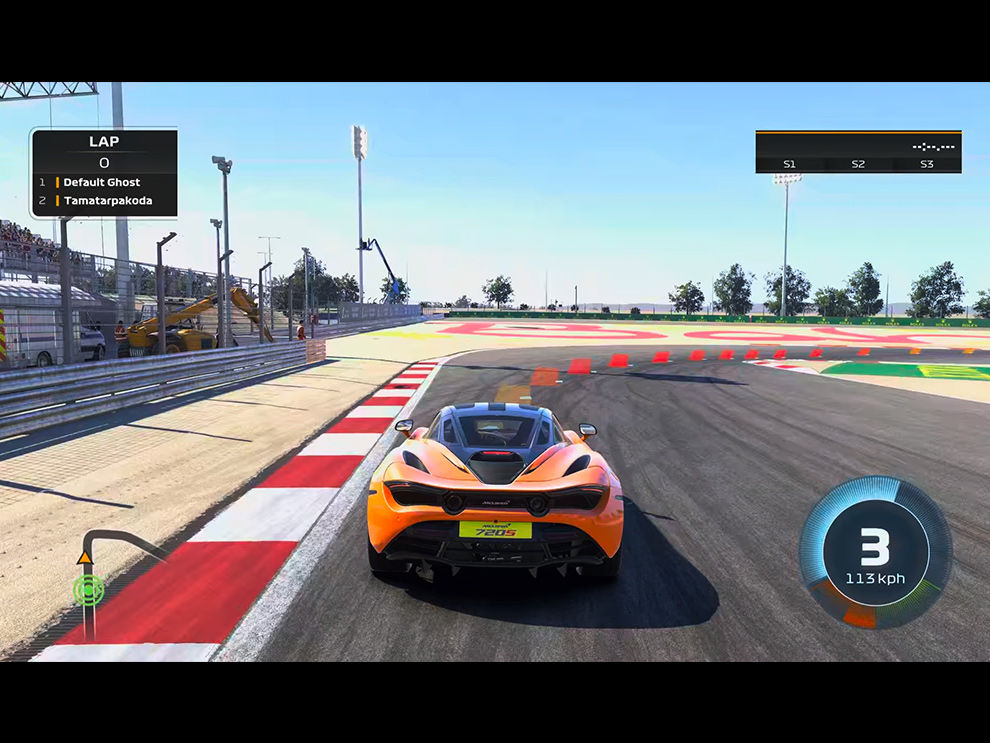 The other mode is time trials where you can just master a particular track and even compete in online rankings. You can also do entire Grand Prix’s and Time Trials in Formula 2 cars which we highly recommend. F2 cars and teams are true to life as well with realistic performance. Lastly, there is the option to set some laps using 10 supercars as well. You get one when you first start the game and you earn more as you progress through the game.

We played F1 2022 on the DualSense controller and that adds a level of immersion that was previously unavailable to other controllers. By default, the L2 and R2 triggers are mapped for braking and acceleration respectively and the new DualSense gives you a more comprehensive feel of what's going on with the car. For example, if you are a little too aggressive with the throttle and about to lose traction, the R2 trigger tightens up giving you the queue to back off a bit.

Probably the weirdest part about the F1 22 game is F1 Life. It’s a load of fluff that must have taken up a significant chunk of the developers' time and resources. It has no place in a racing game like this and it's absolutely pointless. 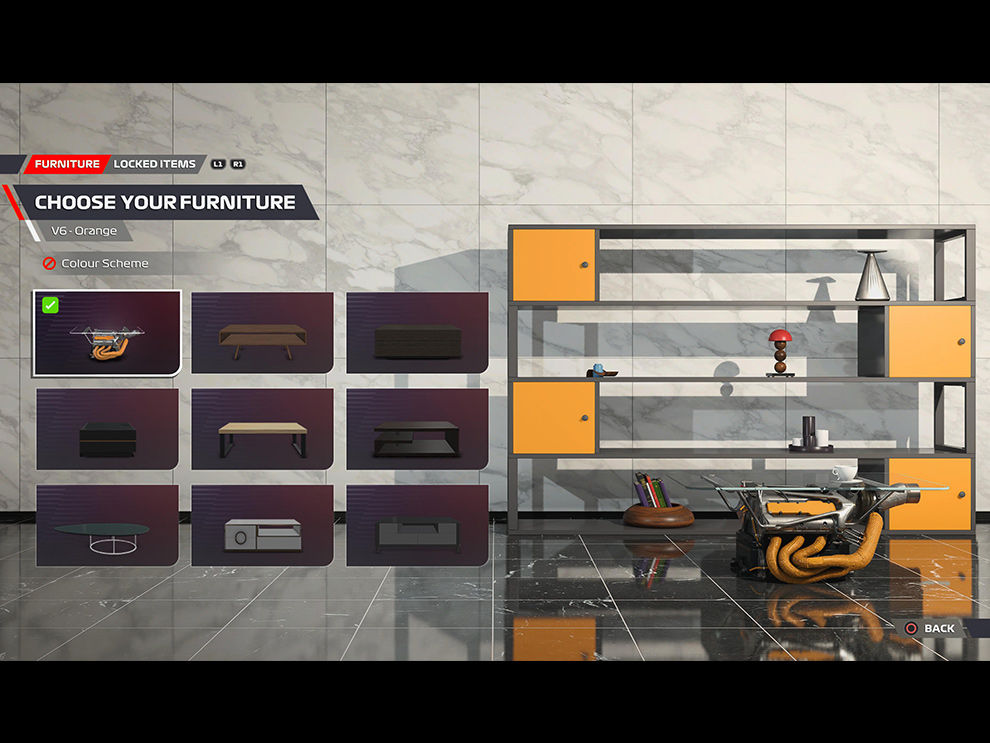 In F1 Life you can deck up your quarters with fancy furniture, art, rugs, couches, lamps and even shove your supercar in there. You can also drape your avatar in branded clothing which… is nice if you’re into that sort of thing. And that virtual environment is where you can hang out with your online friends, cuz, you know that’s what you want to do in a racing game…hang out in a virtual room.

We already spoke about the solo modes where you can quick race, time trial and race supercars, but most people looking to get the game will be more interested in the career mode or multiplayer gaming. So let's get into that now. 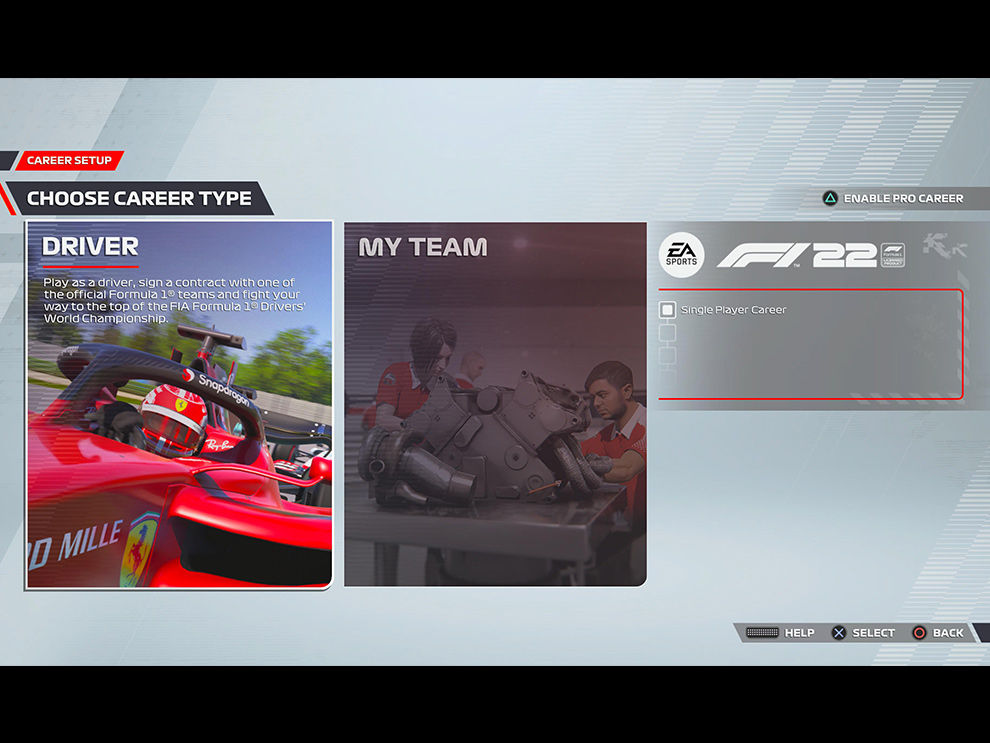 The career mode in F1 22 has two options to choose from. The first is the My Driver Career mode and the other is the My Team Career mode. The My Driver career mode allows you to create a new driver to partner up with any of the team's existing drivers. You progress through the career as you normally would as a new driver with the current lineup of teams. You can research parts and upgrade them to yield better performance.

The My Team career mode though is much more interesting. With this mode, you get the chance to create a whole new team as the 11th team on the grid (just in case you didn’t know, Formula 1 currently has only 10 teams). With the new team, you have the option to choose how strong this new hypothetical team will be. You can choose Newcomer which is basically going to leave you at the back of the grid with fewer resources. This mode is personally the one we would go for as a challenge to reach the top over multiple seasons. With this mode the car is quite underdeveloped and sorely needs quick upgrades. In short, it's like setting up a whole new team from scratch. You can also hire your teammate from the F2 roster.

The next mode is the Midfield Challenger which makes life a bit easy. Your departments are already at a decent enough level and you have more resources to play with as well in terms of cash. And the last mode is where you can start a new team that is already in the top echelons of the sport. You have more money available and the research facilities are the best in class.

Multiplayer mode has all the bells and whistles you might expect to get started with racing either your friends or random strangers online. You have the Social Play option in which you get to choose what kind of game you are looking for depending on your skill level. Within the Social Play option, you can choose between Beginner Friendly and Experienced Drivers which will just show you the lobbies created for the respective skill level. You also have the Browse option which just gives you a list of all the active lobbies and you can create your own lobby with the Create Custom Game option.

The game also offers Weekly Events for a new challenge every week and you can test yourself against everyone in Ranked Play. 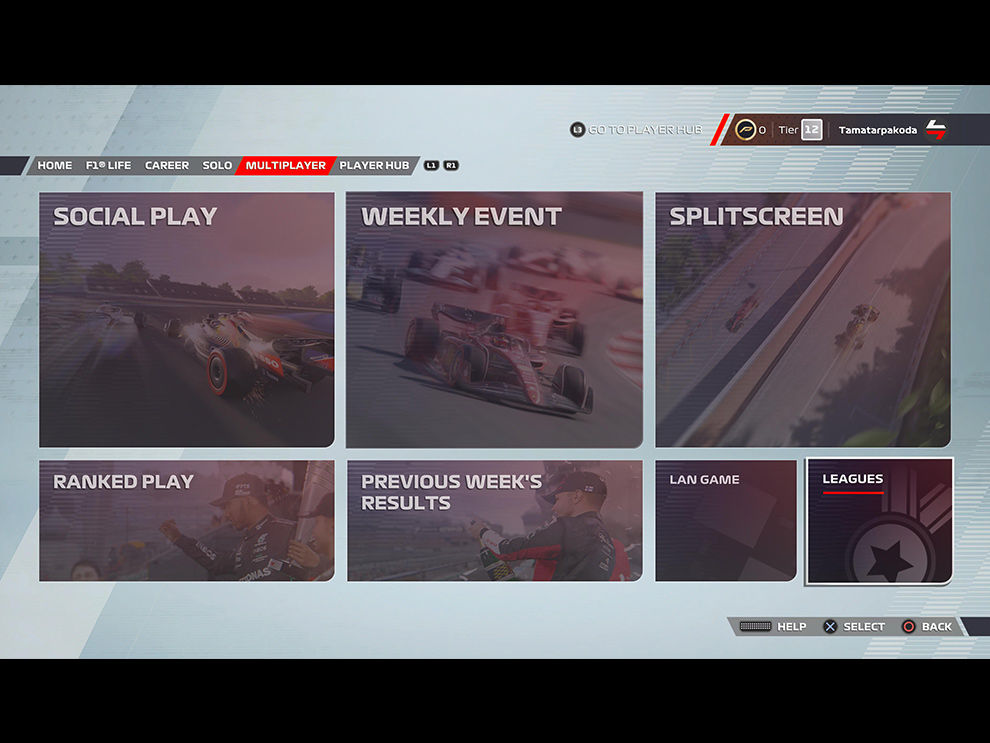 The newest iteration of the official F1 game rode the hype of this year's F1 season as there was a whole lot of stuff that was new to the sport. A new reigning world champion, brand new cars, new regulations and the maximum number of races in an F1 season to boot. So it's only natural for the game version of the sport to get more love than usual as well. 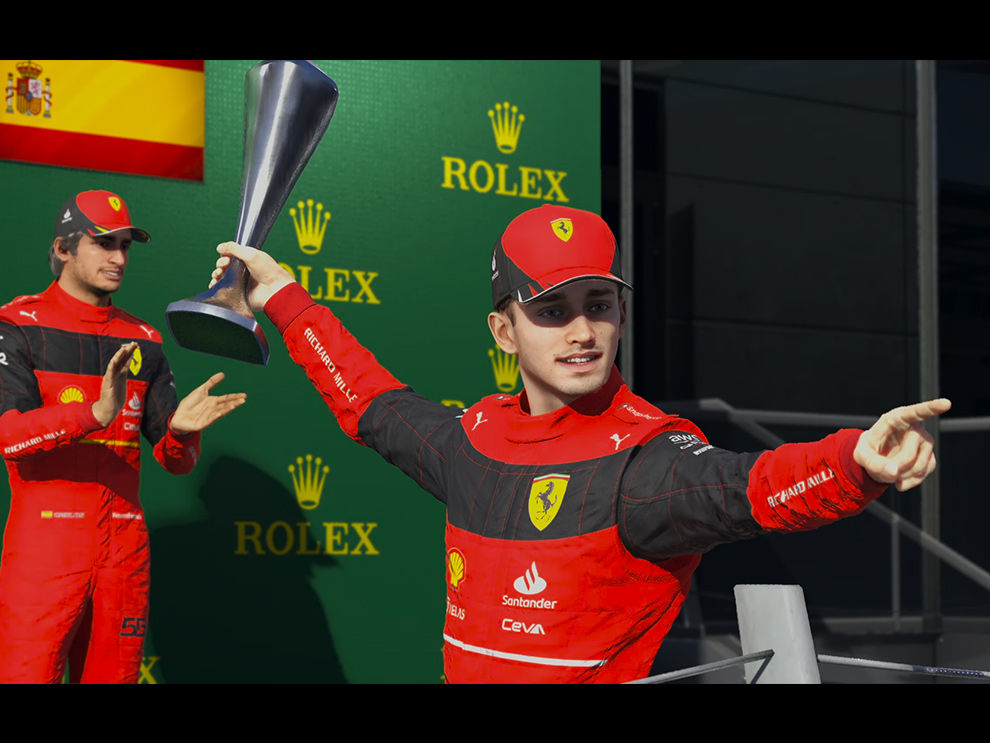 But there are a few aspects where things could have been better. Overall the game would be perfectly fine without the F1 Life mumbo jumbo. Instead of that, devs could have given us the option to buy legendary F1 cars from yesteryears and take them out for quick races. Not only would that be more appreciated, but it would also give a casual racer the development that F1 cars have seen over the many decades of the sport. There is also the issue of the illusion of speed, which we must say is more of a personal gripe and admittedly a nitpick.

On the PS5 the game worked pretty flawlessly without any drops in frame rate (or at least ones that we noticed). The new DualSense controller is the best controller to experience racing games on. While obviously not as immersive as a feedback wheel and pedals, the DualSense controller gives a new dimension to racing at least with F1 22.