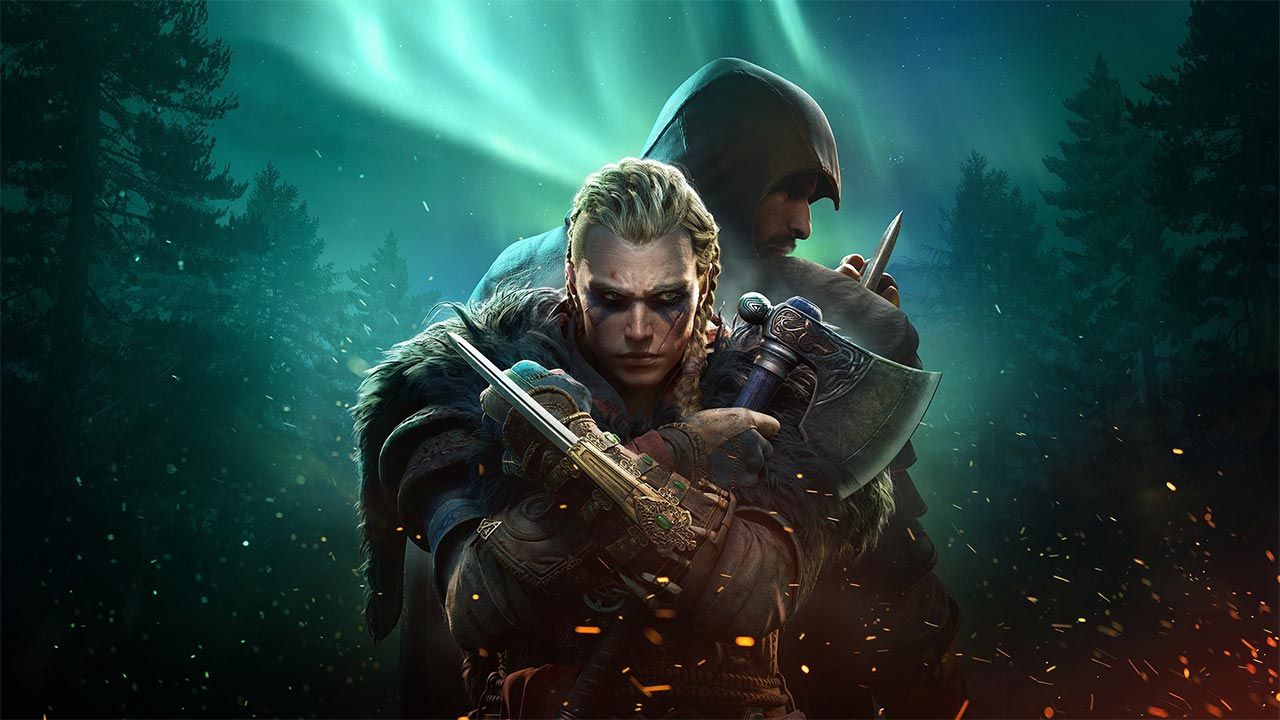 Storytelling in Assassin’s Creed has always been interesting. From the days of Al Tair and Ezio, to Bayek and Alexios or Kassandra, the way they’ve managed to (or attempted to at least) connect all the dots has been a fun journey for those who’ve stuck around since the beginning. The story starts getting progressively crazier as you knock the games down in chronological order. The story in Valhalla continues where Odyssey left off, and once again, Layla Hassan is the one in the Animus. This time around though, we’re not living the memories of a Greek Misthios. This time, we’re putting on our raiding shoes as a Nordic Vikingr, Eivor. As you can see, Ubisoft have clearly been playing Age of Mythology in their spare time, and are clearly just crossing off each of the playable cultures in the game, starting with the Egyptians, then the Greek, and now Norse.

Jokes aside, Valhalla does a few things differently storywise when compared to its predecessor. The first is being able to freely switch between male or female Eivor at any point in the game. Sure it could be immersion breaking to switch genders midway, but it’s nice to have the option for those who want it. There are no gender specific quests or opportunities in the game, including romances, so feel free to play as whichever gender you wish. There are also more choice driven encounters in the game, both when exploring the open world and within the main story itself. This gives players a semblance of control in terms of story direction, which is nice. 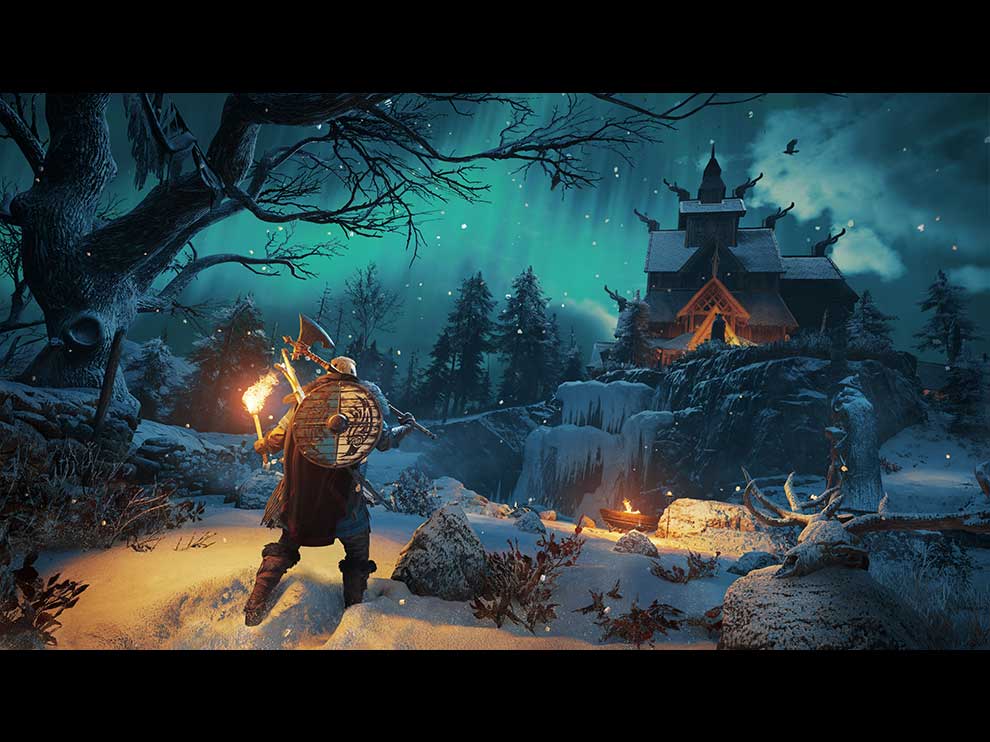 When it comes to Assassin’s Creed, there are always two overlapping stories, one that’s taking place in the present, where you play as Layla, and one that’s happening within the animus, as Eivor. The Assassin’s (in the present world) are trying to save the world, the key to which might lie in the memories of Eivor. Eivor on  the other hand, is a Viking who’s headed to the green shores of England, leaving behind the cold north they called home. The northern clans are rallying together under a single king, King Harald. The only options were to either swear fealty to the new King or leave. And so Eivor, and those of the clan who refused to kneel to the new king left to avoid any immediate conflict. In England, Eivor and his or her clan have to start from scratch, finding or taking what they need to expand and grow and create a new home for themselves in a new world. As expected, there’s plenty of Norse mythology at play here, with Odin seemingly playing a significant role. The biggest give away is the fact that the series’ long-standing bird companion, the eagle, has been ditched for a raven, which is often attributed to the Allfather. As you progress through the story, you’ll encounter a lot of Norse symbolism and mythology in the form of legendary creatures, something that was present in Odyssey as well.

The settlement building aspect of the game is also something new to the series, and ties into the story, unlocking more quests for you to do as you expand your settlement. This includes the Assassin Bureau for example, where you learn more about the mystical Order of the Ancients. Speaking of Assassin’s, the hidden blade is back in Valhalla, given to us by actual Assassin’s from the order no less. Been a while since we’ve seen those.

Like we mentioned above, core gameplay is pretty much the same, such as when it comes to traversal and combat. However, there are a few changes to the systems from Odyssey. While the inventory system is pretty much the same, some of the RPG elements from Odyssey have been toned down a bit. Gear isn’t as stat focused as it was in Odyssey, which is a good thing. You no longer have to worry too much about numbers when it comes to your gear. Additionally, while in Odyssey you always had your broken spear as an off-hand weapon, in Valhalla, you have the freedom to choose what you want to wield in your offhand. Be it a shield, another single-hand weapon, or you could simply go the two-handed way. Each of these feel very different to play, and you can actually feel the difference in combat. The sturdiness and reliability of having a shield, the pace and mobility of having two quick weapons, or the weight and impact of wielding a massive two-handed one. 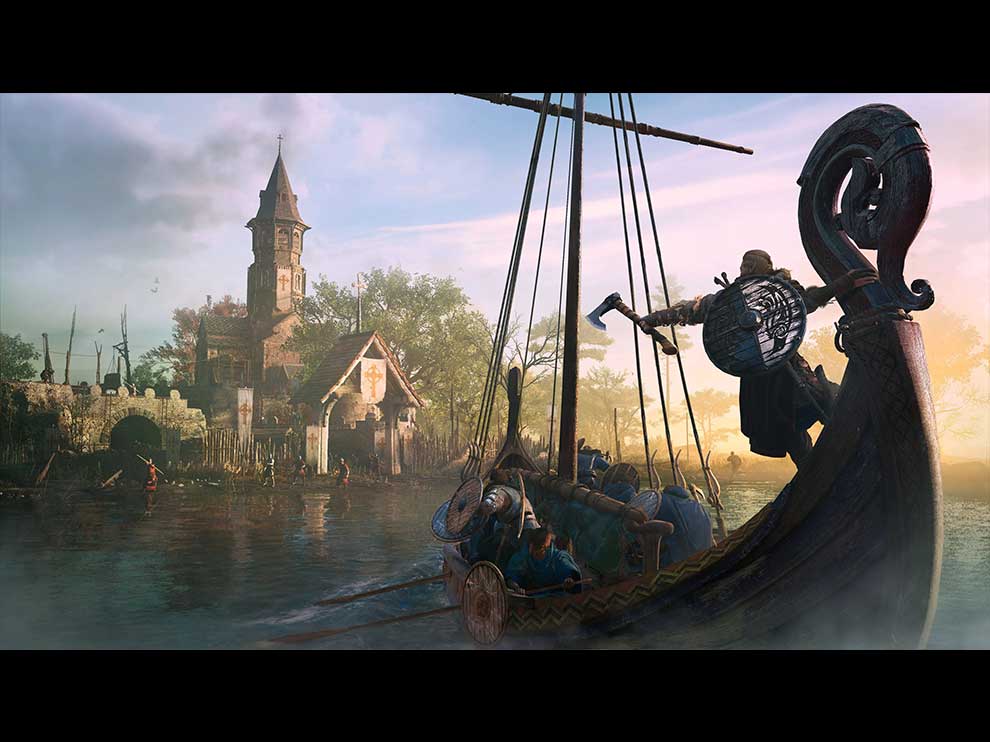 The next thing you’ll notice is that there are no levels anymore. You do still gain experience, and have a bar to fill which will unlock skill points for your skill tree, but there’s no level indicator. Instead of levels, you now have a global power rating, which is contributed to by both your gear and your skill tree progression. They’ve also reduced some of the grind that was required in Assassin’s Creed Odyssey in order to comfortably progress. It’s much easier to transition and progress the story in Valhalla as long as you’ve been doing a little bit of exploring on the side. Of course, if you’re a completionist, you can knock yourself out, the map in Valhalla is actually slightly bigger than the one in Odyssey, which was pretty massive. Valhalla’s map is not as clear cut as the one in Odyssey. Probably to bring out the Viking explorer in you. Instead of seeing fixed symbols on the map which represent exactly what it is you’re heading towards, Valhalla simply gives you a little glowing silver or gold dot. You need to make your way to these dots to find out what it is. Gold dots are usually wealth, treasure, abilities etc. The silver ones include quests, world events, points of interest etc. There are lots of mini-games and challenges to be found if you spend time exploring, they’re also fairly rewarding, so it is worth your while. 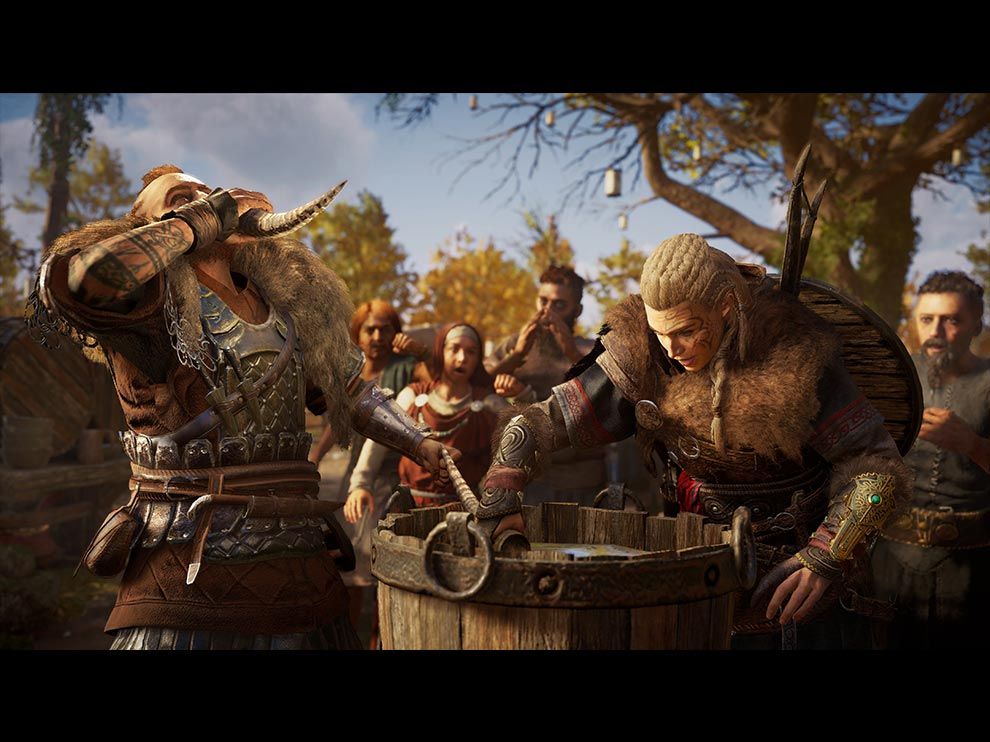 While there isn’t much in the form of Naval combat, which was pretty fun in Odyssey, in Valhalla you’ve got raids. Raiding is a big part of the game, where you launch an assault from your boat on a settlement and you lead a sizable band of raiders to defeat guards at a location and steal their stuff. This usually includes materials that you’ll need to expand your settlement. You can of course choose to go it yourself the silent way and take them out one by one if you so please. Furthermore, as long as you’re near a water body, you can call on your raiding party to assist you in combat, which can make taking on some of the more harder enemies in the game easier. 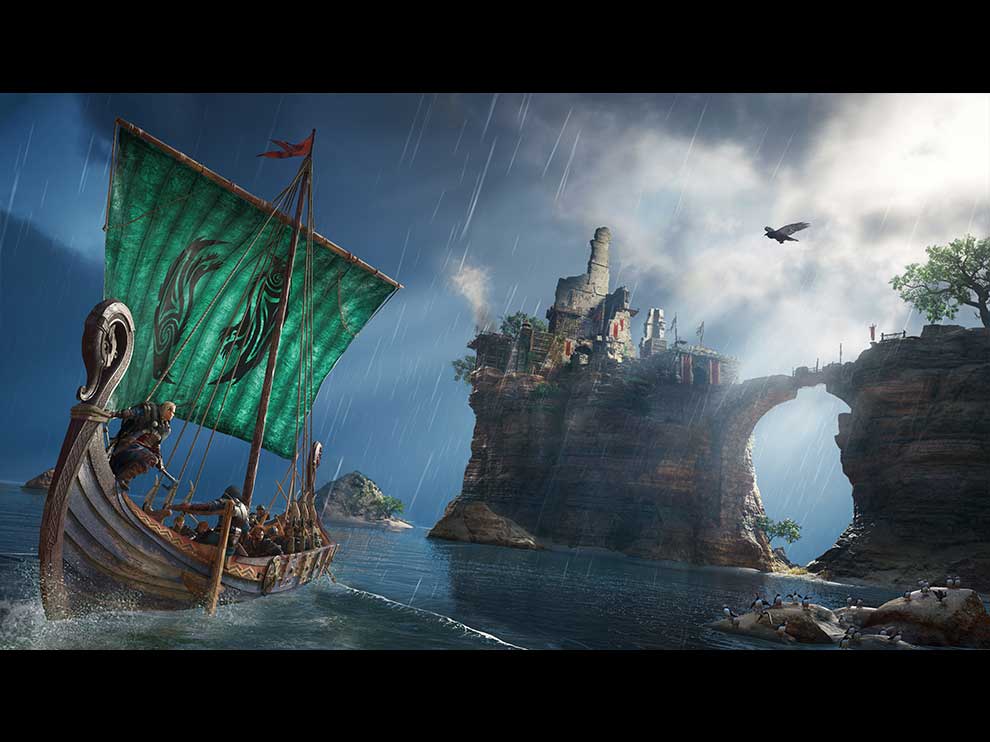 Coming to the skill tree, it’s far more expansive than the one in Odyssey, with several new nodes providing small boosts to your stats. Instead of Hunter, Warrior and Assassin trees, you’ve got Wolf, Bear and Raven trees which focus on different aspects of combat. Hotkey abilities, which are normally mapped to the 1, 2, 3, 4 keys aren’t available right from the start. You have to acquire them by further expanding your skill tree and by exploring the world. 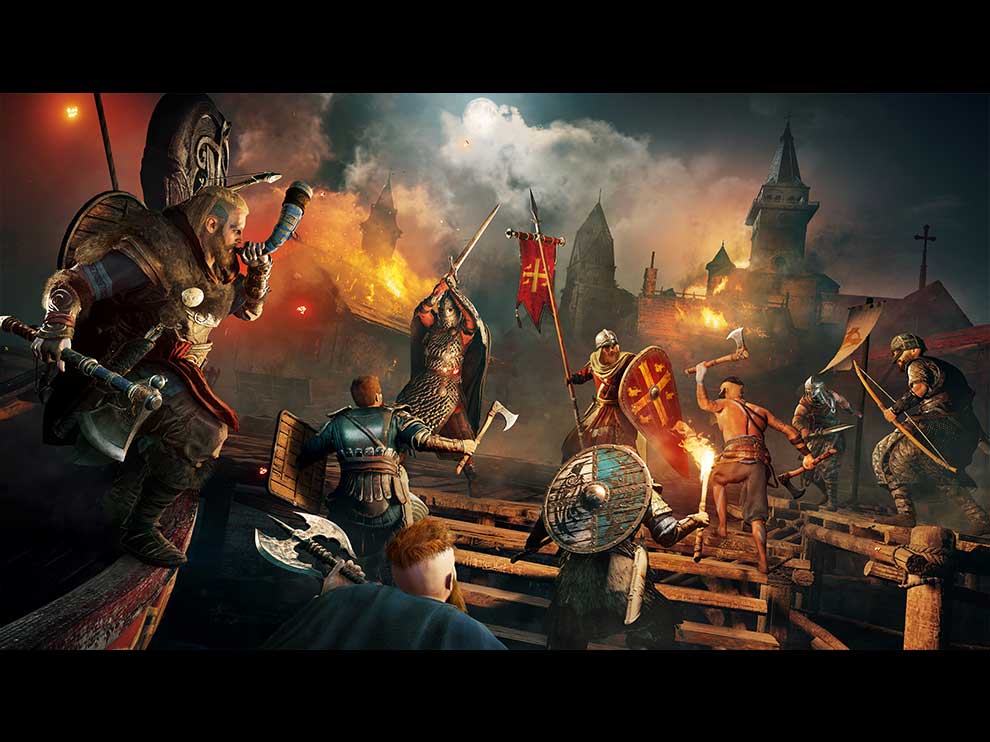 Your health doesn’t automatically regenerate anymore, instead you have a ration system. There are plenty of edible consumables readily available in the environment. These will replenish lost health and once your health is full, will allow you to carry them as rations, if you need emergency healing. 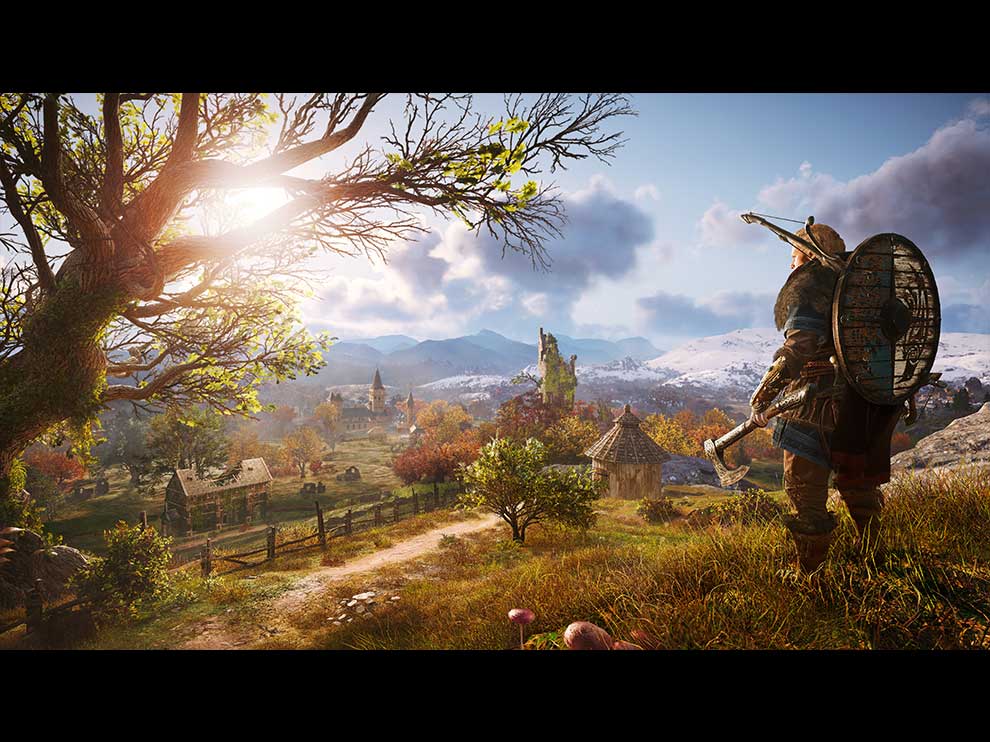 The hidden blade makes its return in Assassin’s Creed Valhalla, something that was missed in Odyssey. It’s given to us by Assassins from the Order, and it was definitely nostalgic seeing that iconic attire again, even though it felt pretty out of place in Valhalla. It does tie into the story though, so we’ll let it pass. In addition to the hidden blade, stealth mechanics like blending have also made a comeback. It doesn’t feel as fluid as it did back in the day, but the option is there. You’ve got a disguised mode where you pop your hood on to avoid suspicion. The rules are pretty much the same, try to avoid sudden movements, move slowly, and blend in where you can and you won’t get noticed. Thanks to the extensive skill tree, assassinations can also be tweaked and improved, allowing you to assassinate even powerful enemies in a single attempt, IF you succeed at a timing based mini-game.

Settlement expansion – Ravensthorpe is the settlement that’s established once you make land in England. As you acquire materials and resources, you can further expand Ravensthorpe and add more buildings and features to the settlement. Adding certain buildings will actually open up new quest lines for you, such as Velka’s Hut or the Assassin Bureau. Building a Barracks will allow you to design your own Jomsviking, which can then be hired by other players online. Settlement expansion is fueled by raids and drives exploration. 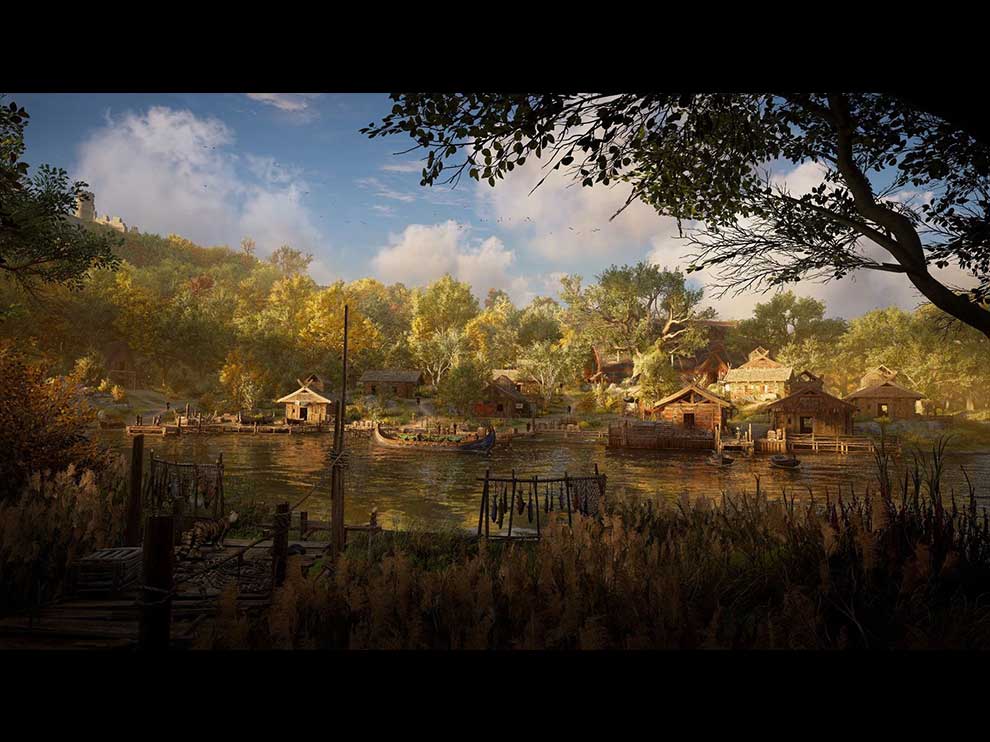 Customizability – In addition to freely being able to swap between male and female Eivor, you can further customise your character. The game allows you to change their hairstyle, the colour of their hair, and the most customisable feature, the tattoos. There are lots of tattoos in the game, most of which need to be collected by you. You have the option to hide any piece of armor you’re wearing, not just the head piece. This has been done specifically so you can show off your tattoos.

Assassin’s Creed Odyssey set a pretty high bar when it came to visuals. Greece looked beautiful, and we didn’t think Valhalla would be able to top that. We’re glad to say we were wrong. Valhalla looks gorgeous, from the snowy Northlands to the rolling fields of England sprinkled with the reds and yellows. Ubisoft knows their game looks good, offering you plenty of opportunities to enjoy panoramic views of the environment while you’re sailing and exploring. 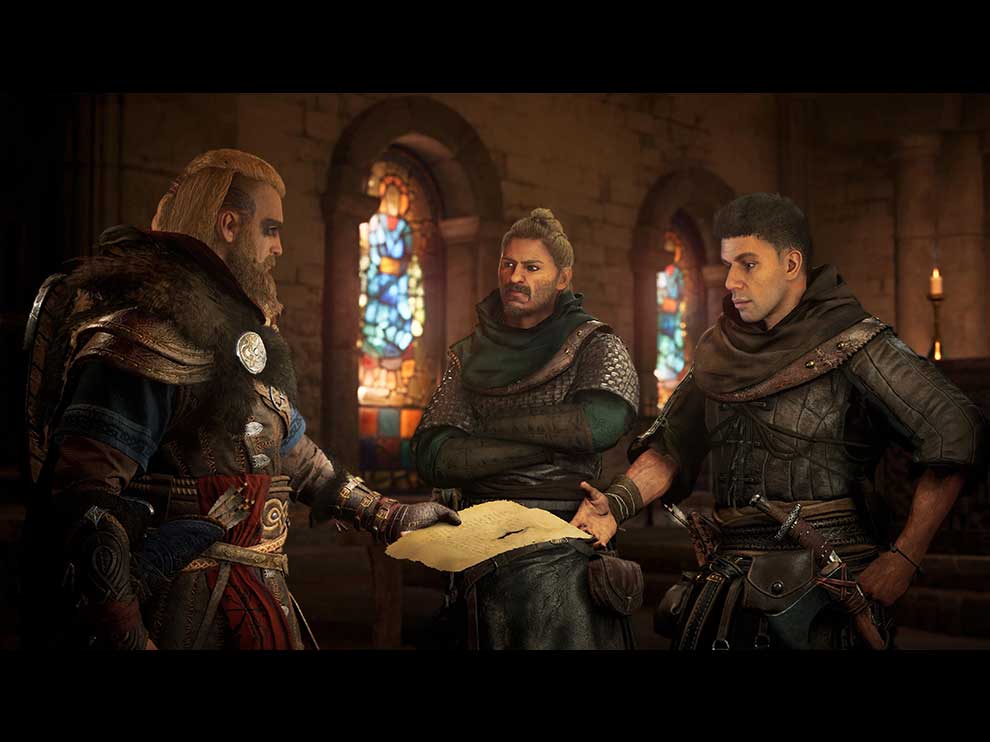 We’ve no complaints about the voice acting, both male and female Eivor sound great. The game’s soundtrack is also fantastic, and fitting of the overall theme of the game. Furthermore, while sailing you now have the option of listening to epic stories instead of just your crewmates singing, which is nice.

Assassin’s Creed Valhalla starts pretty slow, and interest can wane during this period of the game, unlike Odyssey which gripped us right from the start. However, if you give it some time, Valhalla starts to grow on you, as you figure out the game’s systems and figure out your own system of exploring the vast world. As is the norm now, the game launches with a day one patch, which supposedly addresses bugs and other issues in the game. We did encounter quite a few broken quests in the open-world and even found a really annoying bug where once you grabbed onto an object to push or pull it, you couldn’t let go unless you saved and reloaded. We hope this, and others that we might not have encountered are fixed as soon as possible. Once again, like with Odyssey, if you were expecting a game more similar to the Assassin’s Creed games of old, you’re out of luck. While Valhalla definitely takes steps towards bringing back some of those mechanics, this is yet another open-world RPG-esque offering from Ubisoft under the guise of Assassin’s Creed.