Twitter on Airtel Digital TV - A good start, with a lot of potential 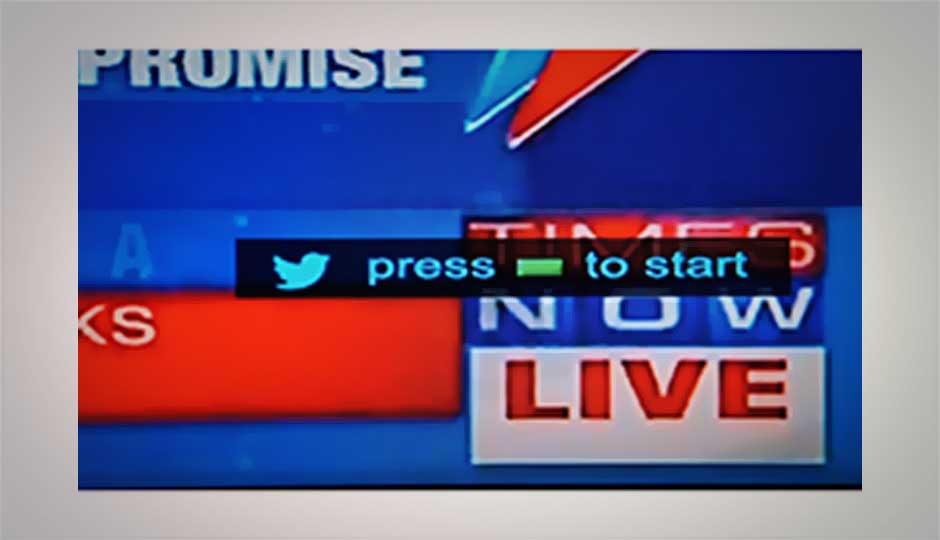 Airtel recently announced the first-of-its-kind integration called 'Twitter on TV' which shows Live Twitter feed on your TV. It's a unique service because it is available via the Airtel Digital TV direct to home (DTH) set top box that brings you Live TV and does not require your television to fall under the Smart TV category. It doesn't even require Internet connectivity. Twitter on TV is available on all Airtel Digital TV set top boxes - SD, HD and HD DVR. And the best part is that you don't have to pay anything for the service. We had a chance to experience the integration first hand on our Airtel Digital TV HD DVR. This is our takeaway from it.

However, it is interesting to note that this service is initially available only on certain TV channels (like Times Now) at the moment and it would be necessary for you to ensure that you have access to that channel as part of your channel bouquet. 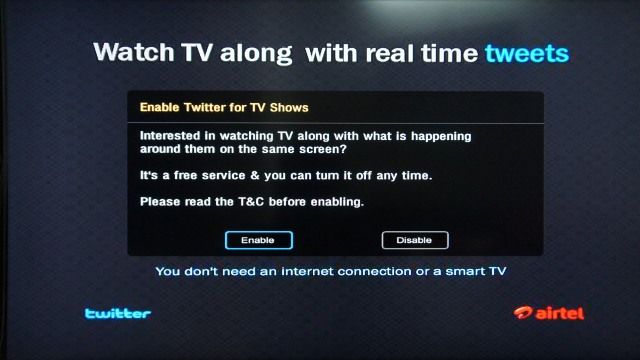 How to access the service
There are two ways of getting access to this service. On certain channels (which are current partners with the Twitter on TV service), you will see an overlay of the Twitter logo and a message indicating that you need to press the green button on the remote to start the service. Alternatively, this works successfully on any channel if you access the iTV menu via the marked button on the remote. There will be a list of active services like iMusicSpace and iExam. Twitter on TV will be sitting somewhere on this list. Select it, press Enter and the Twitter window will open up. 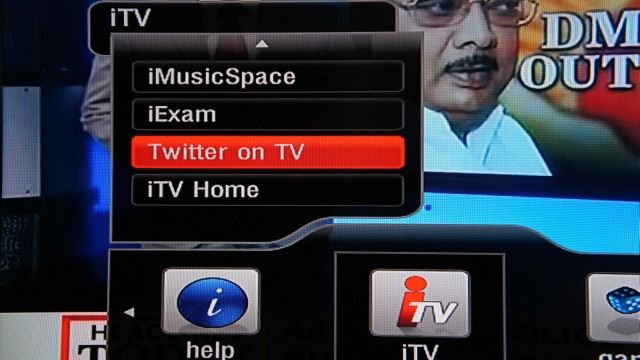 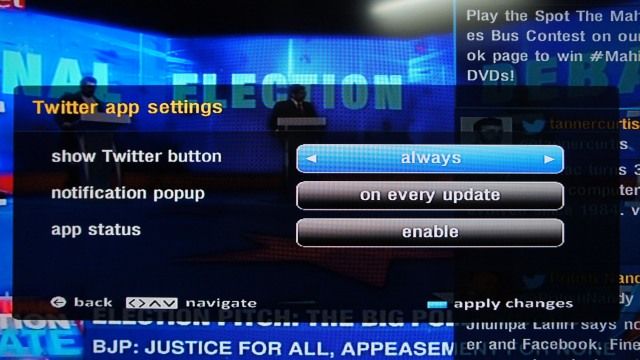 Within the settings menu, you can enable and disable the Twitter on TV service on your set top box. There are no charges for enabling the service, so don't worry.

Using Twitter on TV
Now that we have established the methods that can get Twitter on TV working, its time to give you a summary of our experience with the service.

When you press the green button, the default window that opens up is a vertical one on the right side of the screen. It is not completely opaque though the transparency level is so that it doesn't block the actual TV broadcast which makes reading the tweets a comfortable activity. Three to four tweets are shown up at a time depending on the length of each tweet. In case the text of the tweet is incomplete in the timeline, you can select that tweet and press enter to open that individual post in a separate popup.

You do not necessarily need to have a Twitter account to get access to this specially handpicked selection of tweets but if you wish to post something and see that on TV, then you will need an account and create a post with #ONTV to be a part of that timeline that is being broadcast to all Airtel Digital TV users.

You can use the up and down direction keys on the remote to navigate through the timeline and while the tweets get refreshed automatically, the impatient users out there can tap the red button on the remote to manually refresh. Pressing the green button again will close the Twitter window. Pressing the yellow button takes you to a settings popup which lets you set whether the green button should show on channels, whether you want a notification every time the timeline is refreshed and check the app status on that particular set top box. You can press the blue button on the remote to change the view of the Twitter feed. In the second view, timeline shifts to a rectanglular box at the bottom of the screen and this time only one tweet is visible at a time. The third screen reverts the feed window back to the vertical style as earlier but this time with a black background, the Live TV window in reduced size on one side, and more details below that. Between the three, we prefer the translucent vertical Twitter feed. 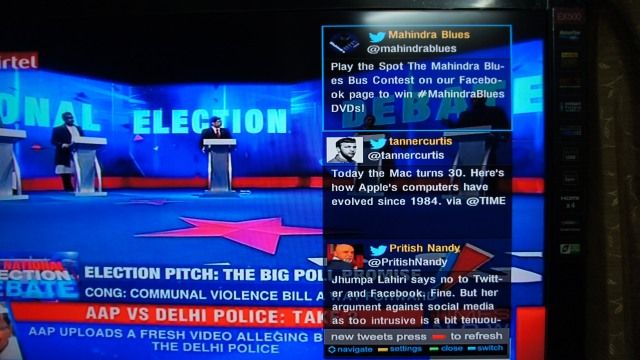 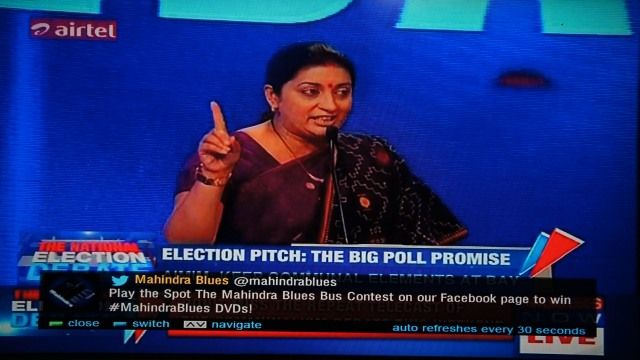 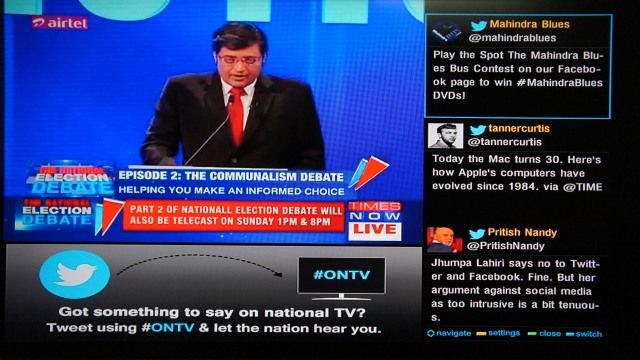 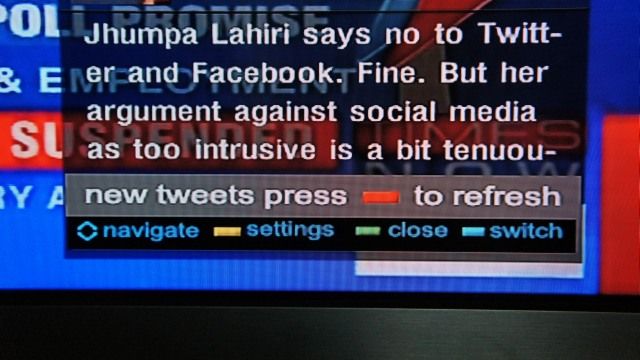 Do we see a future for Twitter on TV service?
Yes, absolutely. This is a service that brings Twitter closer to the masses (at least the Airtel Digital TV DTH service users). Without much effort, they get to know what the Twitterati are talking about - the issues, sports, celebrities etc. It also gives them the chance to give their views out to other users (if they use the correct hashtag with their tweet).

We expect this service to extend to more channels in future including sports and movies. That is where the fun discussions will be and the often claimed “second screen” experience will be seamlessly integrated within the first screen itself! Additionally, if the service allows users to sign in with their Twitter accounts, that just adds a massive amount of personalization - in terms of which tweets a user sees on their screen, and who they are sharing their views with.

But without doubt, its an interesting service that brings an additional dimension to the TV viewing experience. And it doesn’t cost anything, so there's no harm in trying it out!