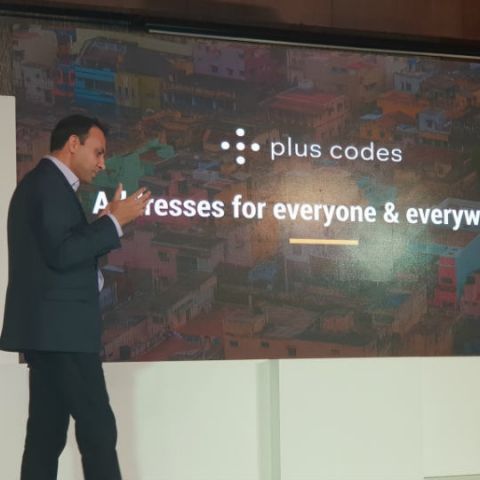 A fundamental problem in finding out a place as vast and diverse as India is the address. A residential address isn’t like what you see in a developed country like the US where the address simply includes a house number and a street number. In India, an address to a house or a shop runs over two-three lines and includes the house name and number, lane name and number, the street name and finally the name of the city, state and the PIN code.

In a digitally advancing India, typing out that long an address is often a cumbersome process. Thick fingers typing out in a small smartphone screen will have spend some time to get it right. More than that, since there is no unifying factor in how a place is addressed across the country, it’s often difficult to train an algorithm to find an address or even to locate a place. Google Maps, which has become the go-to app for navigating and locating places on a map, faced the issue of finding a way to map a country like India.

The app has it easy in the US or in Europe. There’s Street View that physically goes to a place and maps it, replete with every bit of information available around it. Plus it’s easy to guess an address of one place by looking at another. In India, the situation is vastly different. Noida has its area divided up into sectors while Jaipur has it separated into Nagars. Kolkata has its paras while Delhi has gallis.

Google took it upon itself to ‘address’ the issue. It’s answer? Plus Codes.

Simply put, Plus Codes are the addresses of cities of the future. Google describes it as “street address for people or places that don't have one.” It assigns a small geographical area with a unique string of characters that can go up to ten characters.

The Plus Code for Digit’s office in Noida looks like this: H8P8+9H Noida, Uttar Pradesh.

Instead of typing out the long address for the office, the Plus Code can be shared with people. Typing in the code in Google Maps or even in Google Search will take you to the location. The 7-string code is unique to the location, on a global scale. Cool, right?

What’s even better is that Plus codes are open-source. Anyone can place a pin on a map and generate a Plus Code for it. It transcends borders, accessible offline and can be used without depending on a smartphone.

Google actually had the feature up and running for quite some time now. It used to be called “Open Location Codes” which worked as an alternative to using latitude and longitude. It worked like a street address for places that don’t have a specific address. But back then, it could only be seen on the desktop application of Google Maps. Over the last year or so, Plus Codes have been appearing on the mobile app as well. A co-worker of mine claimed he had used it as an alternative to live-location sharing back when location sharing wasn’t an option. That too in a Tier 2 city like Nagpur where addresses often are more confusing.

Plus codes work similar to how a Pin code works. The six-digit pin code used in India is interpreted by dividing the number into region, sub-region, district and finally the post office. Quite similarly, Plus Codes are divided into an area code and a local code, combined with the name of the city and state. Google Maps has created a grid across the world, with each square labeled by an area code. The area code is further divide into smaller grids which gives the local code. Google said the Plus Codes are accurate up to a 14x14 square metre area. That essentially allows Google to map every building in India with a unique Plus code.

“Each character of the Plus code is a reference to an area on the world map. It starts off with high-level rows and columns which represent large geographical areas and then you keep adding more rows and columns inside the larger boxes to close in on the location. Based on our research, we found that a ten-string character is the right format and the right size for people to use. But it can change as we keep adding more Plus codes. We can more letters, more numbers, but a Plus code for a place is unique to that particular place,” Anal Ghosh, Google  Maps Lead in India  told Digit.

Moreover, the onus to map the world using Plus codes is not just on Google. Plus codes are open-source, which means just about anybody can place a pin on a map and generate a Plus code for it. Car broke down in the middle of the highway? Just create a Plus code for your location and share it with the mechanic.

It could be argued that Google Maps already had a simplified way of sharing location. Location URL can be shortened into a bite-sized text that can be shared via an app. But that link remains confined to the digital space and can only be used to lookup an address on an internet-connected device. Plus Codes work offline as well. Simply write down the code on an invitation card, or on your business card and anyone can type the code out on Maps or Search to find the location. Why the name Plus code though? The code literally has the ‘+’ sign combining the area code and the local code and it becomes useful to computers to differentiate a random string of characters from a Plus code.

Plus codes are the future. In a globalised world where borders between countries do not bound people anymore, addresses too will have to be liberated from the bounding nature of borders. With people from diverse cultures who speak diverse languages coming together, having an alphanumeric code for an address removes that cultural barrier. It’s also easier for a computer to understand and ultimately, it becomes easier to services like Amazon, Uber, Ola, Swiggy and Zomato to serve users better.

However, Plus Codes may be the future, but it’s still far out. Plus codes are not replacing the traditional street addresses in India anytime soon. And for that too, Google has a solution. Using machine learning, Google will parse the addresses to find out known landmarks, or a familiar street name to get the user closest to the destination. Most of the time Google Maps, or any other mapping application, for that matter, will fail to register an exact address, especially in India. Google’s ‘Smart Address Search’ will pick up the most recognisable part of the address and redirect users to it.

But what if there is no address in the first place? You can add it manually of course. While you could add addresses to businesses or shops, adding address to a residential space is new. Google allows free-form addresses to accommodate the Indian way, and pulls the name of the city, state and the Pin code automatically based on the location. Google also has strict guidelines for not including personal details like name of a person or a phone number while registering an address.

“Over the past three-four years, we have been focusing on India a lot. Google Maps was introduced as a global product in India a decade back in 2008. Then we started looking at all the challenges that were specific to India. We had the technology for Plus code developed in 2015.  Then we realised that address search is an issue in India, and the technology could be used as a solution. So we customised it for India and built the product accordingly for India,” Ghosh added.

In all, Google is deeply invested in solving India’s navigation problem. The primary motivation for it is to reach the next billion users, something that Google likes to mention often. But more importantly, India has become Google’s testing ground. Just like the offline playback feature in YouTube (which was copied by all and every streaming app), and the bike-mode in Google Maps, which Google claimed is used by around 10 percent of the total user base of Google Maps, smart address search and Plus codes, if successful in India, will lead to more global implications.