Google Play Music All Access now in India: Here's all you need to know 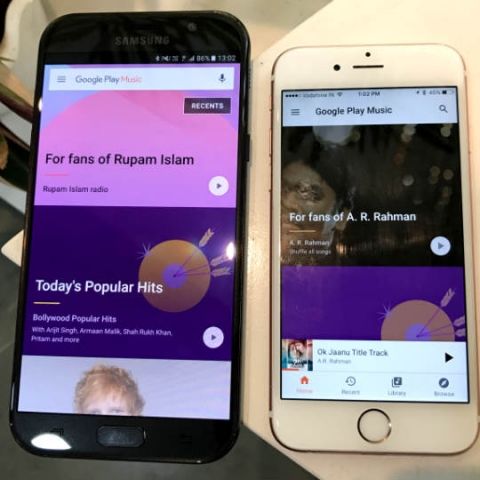 Google’s music streaming service, Google Play Music is finally live in India. Subscriptions for the service will be available for Rs. 89 per month, making it cheaper than Apple Music. The app is available on Android, iOS and the web. Note that this is only an introductory price, applicable for users who subscribe to Google Play Music within the first 45 days. Google confirmed that subscription after the first 45 days will cost you Rs. 99.

The app uses Google’s machine learning algorithms to suggest music as well. “To make the experience deeply personalised, we’ve plugged into Google’s understanding of context and machine learning to recommend the right music at the right moment based on each listener’s preference, place and activity,” said Elias Roman, Lead Product Manager for Google Play Music.

Further, Google claims that the music catalogue on its service ranges over 40 million unique local and international titles. Users will be able to find music by language, which indicates that Google may be continuing its focus on Indian languages with this app too. Subscribing to Google Play Music is pretty easy. If you’re on an Android phone, you probably have Play Music pre-installed on your device. The app will need to be updated before you can subscribe to it. Post updation, you’ll automatically get the option to subscribe. If you don’t, then you still get access to some of the playlists, but you can’t search through the catalogue.

If you choose to subscribe, you’ll be billed through the Google Play Store and the first 30 days will be given to you for free. So, you’ll be charged Rs. 89 from the second month onwards.

The subscription service doesn’t seem to be live on the iPhone just yet, and is presumably being rolled out in phases. We tried on three devices, an iPhone 6s, iPhone 7 and iPhone 7 Plus, none of which allowed us to subscribe. 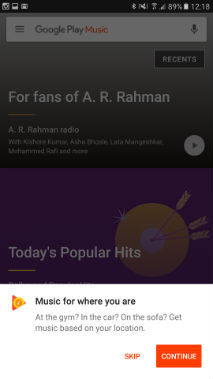 An interesting addition, one that is very “Google-like”, is Play Music’s take on offline streaming. While you can of course set up your own playlists and download songs, the app will keep an offline playlist ready at all times, in case you forgot to download songs. This will be done based on the most recent tracks that you’ve listened to.

Google Play Music also makes use of Google’s Maps data, to suggest music based on where you are. So, if you’re at the gym, the app will suggest tracks that go well with a workout and so on. We’re not quite sure how accurate this will be yet.

Google Play Music allows you to set music quality from settings. However, it doesn’t specify the bitrate music is played in. You get to choose between Low, Normal, High and Always High. Of course, the choosing the last one may mean higher buffering times when you’re in weak connectivity areas. We’ve also asked Google to clarify what bitrates will be applicable on these settings.

UPDATE: Google got back to us on the applicable bitrates. Here they are. 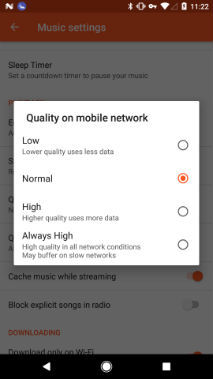 The app caches music on your phone, meaning recently played tracks will not be buffered again and again.