10 must have food delivery mobile apps for India The massive influx of young professionals into big towns and cities in India has ensured that the restaurants and food delivery segment also grows at a fair clip. Coupled with the sharp rise in smartphones and app downloads, it was only inevitable for the food delivery apps to hit the mainstream.

Below you’ll find a list of the most popular and impressive apps that you can use to quickly and securely get your favourite food delivered to your doorstep with the help of your smartphone. 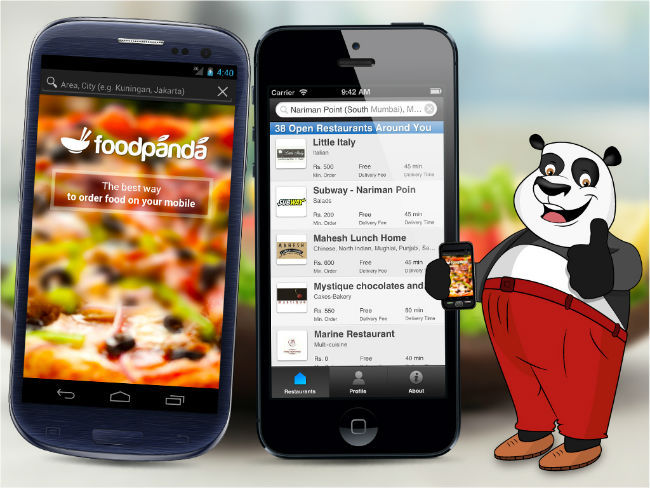 Foodpanda is by far the most popular online food delivery service in India. The reason for its popularity is its large database of restaurants from most big Indian cities and the discounts and offers available.

The Foodpanda mobile app lets you create your profile so that you can save your favourite restaurants and orders for quick access the next time around. Creating a profile will also let you save multiple addresses under different labels (work, home etc.). The app also gives you access to features available on the website including the ability to use coupons and avail discounts and opting for different payment methods including credit or debit cards and cash on delivery.

The app currently offers restaurant listings for 34 Indian locations including big cities like Delhi and Mumbai and smaller ones like Amritsar, Howrah and Vapi.

Just Eat may not offer the same number of restaurants (or as some may argue- the same quality of service) as Foodpanda, but it is undoubtedly very popular especially in Indian metros. The Just Eat app offers relatively the same features and services as Foodpanda including access to a large number of menus and restaurants and the ability to pay using cards or cash on delivery.

The Just Eat app caters to nine Indian cities including Delhi, Mumbai, Hyderabad and Chennai among others. 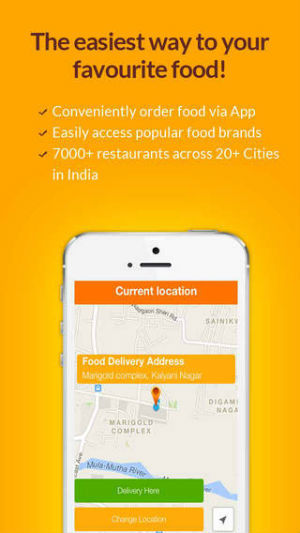 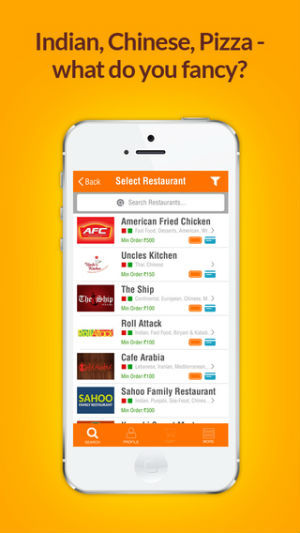 TastyKhana is one of the newer names in online food delivery but that doesn’t mean that it falls short in any respect. It offers access to more than 7,000 restaurants across all the big cities in India and lets you, like the apps above, save your profile and data such as multiple addresses and favourite orders. TastyKhana also lets you pay using the method of your choice including net banking, credit/debit cards or cash. 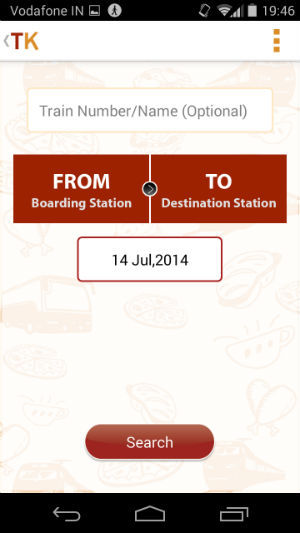 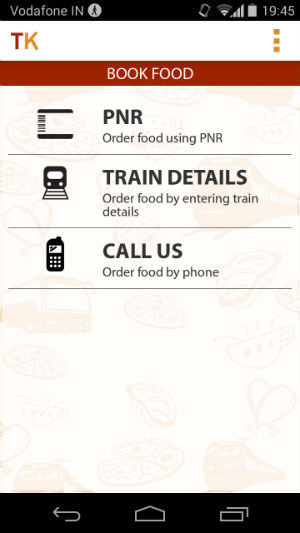 Okay, now it gets interesting. How often have you felt hungry on a train but didn’t really want to eat the food on offer in the pantry or the train stations? If you’ve faced this issue before then TravelKhana is the app for you. Using the app, you can place an order for the food you want to eat and it will be delivered to you at one of the stations on your route. The app has a database of restaurants from across India and especially along popular train routes. Once you pick a restaurant, the app then lets you go through the menu and pick what dishes you’d like to offer.

Currently, the app does appear to be a little anemic with respect to the number of restaurants on offer across different cities but hopefully that number will go up soon. 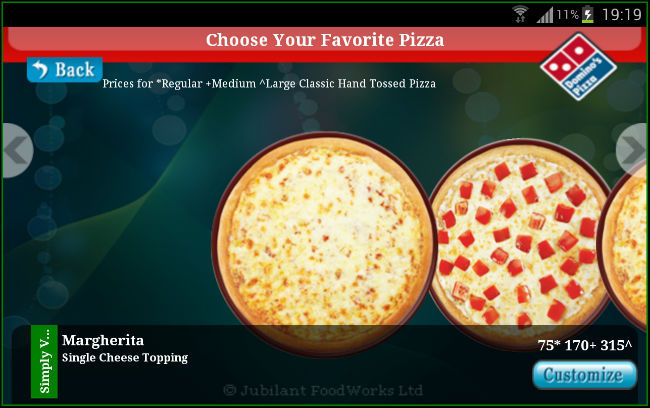 Alright, I’ll be the first to admit that the Domino’s Pizza app in India is not very good. Actually, it’s pretty terrible. From the forced landscape perspective to the touch controls that require a couple of taps to register, it’s pretty clear that Domino’s could have done much more to make its app better. However, if you regularly order from the pizza chain, then for better or for worse, the app gives you the most exhaustive and easiest way to order without resorting to a call.

To its credit, the Domino’s app lets you add coupons to your order and also pay using your method of choice.

Available for: iOS, Android, Windows Phone (only in Hyderabad) 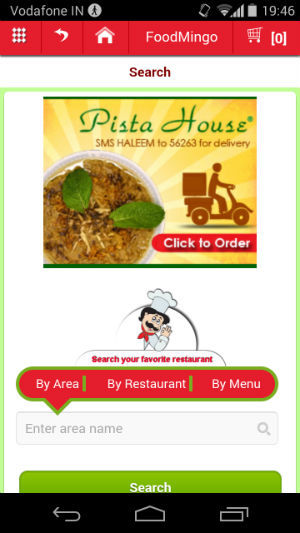 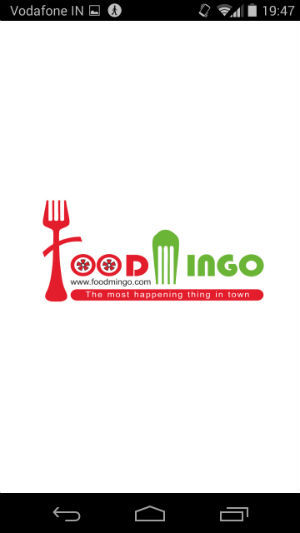 FoodMingo is a food delivery service that’s currently only operational in Hyderabad. Even though that effectively reduces its audience, if you happen to be a resident of the city famous for its cuisine, FoodMingo will serve you well. The FoodMingo app (and website) has a repository of over 200 restaurants from the City of Pearls that cover a wide variety of cuisines.

The FoodMingo app lets you place orders online and opt from a set of payment options including cash on delivery, net banking and credit/debit cards. Apart from that, the app also lists out exclusive deals that some of its partner restaurants may be offering. 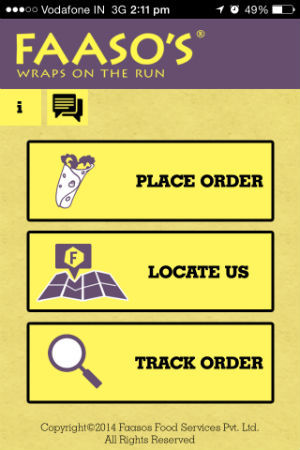 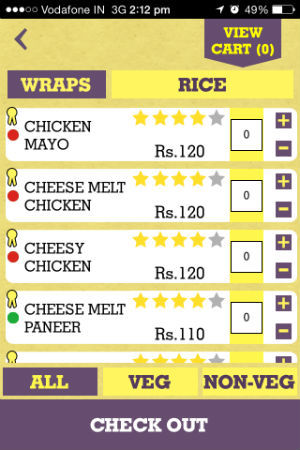 Faaso’s is a very popular fast food joint in Mumbai, Bangalore, Ahmedabad and Pune that’s known for its large selection of wraps. Unlike Domino’s, Faaso’s has done a great job with its app and treads a fine line between making the app stick to the restaurant’s aesthetics while still being easy and simple to use.

The app gives you the options to customize your orders in multiple ways. Once you’ve finalized your order you can either opt for cash on delivery or use the app to make an online payment or pay using your credit/debit card. You can also use the app to track your orders. 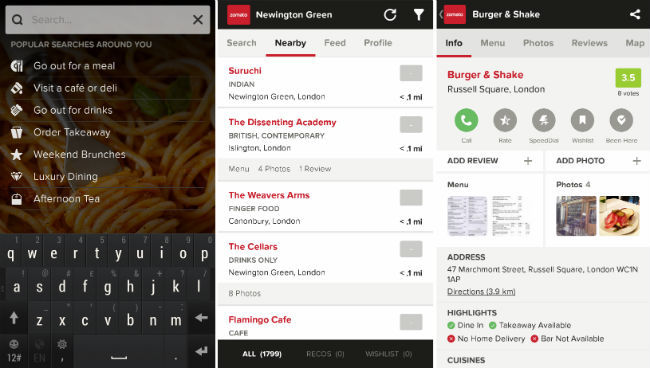 Zomato is the most popular, and some would argue, the best, restaurant recommendation service in India. The service covers most Indian towns and cities and has a massive database of restaurants, outlets and even ‘thelas’ on offer. The Zomato app is understandably excellent to use and receives updates consistently to keep the UI in tiptop shape and to iron out bugs.

Apart from offering you restaurant recommendations, Zomato also works as a sort of social network for foodies. You can follow different people to read their restaurant reviews and also create your own profile. The Zomato team also regularly creates curated lists, called ‘collections’, in which they list out the best or the most impressive restaurants and joints under different categories.

If you relate to terms like ‘eat out’, ‘dine in’ or ‘take out’, Zomato should be installed on your smartphone. 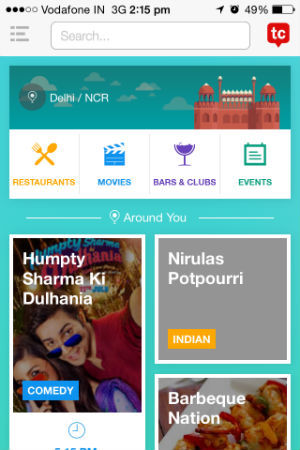 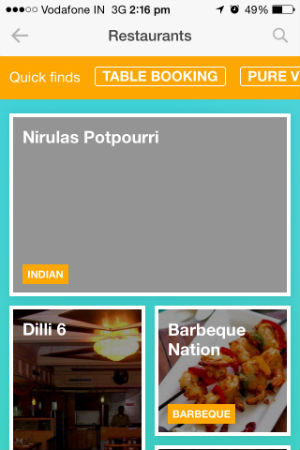 The Times of India’s app is a multi-purpose one for anyone who lives in an Indian city and likes to be informed on stuff that’s happening around him/her. The Times City app lets you know everything that may be going on around you with respect to the theatre, movies and other events but it’s also a great restaurant recommendation service on its own.

Like the Zomato app, the Times City app has a comprehensive listing of restaurants from 10 Indian cities. The app is well designed and follows the design cues of iOS 7 and Android Material Design by being good looking and minimalistic. Once you find a restaurant that you like, you can get the info so that you can either visit them or call them for home delivery. Similar to Zomato, you can also read other users’ reviews of restaurants or write your own review. 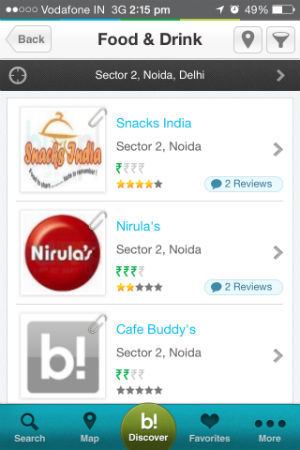 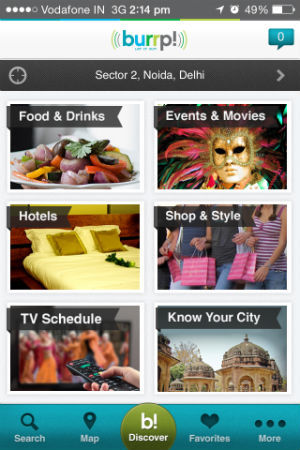 Burrp! and Zomato have been around for a while and are considered to be competitors. As with Zomato, Burrp! also covers a large number of restaurants from a large number of Indian cities and includes menus and information of most of them. What sets Burrp! apart from Zomato is that it also does what Times City does, in that it helps you keep track of what all is happening in and around your city.

How To Get Custom 3D Avatars On Instagram And Facebook In India
Flipkart App On Android Phones Gets A New Design Tweak: Here’s What’s Changed For Users
WhatsApp for Business is getting Cloud API and premium features like Vanity URL and multi-device messaging
Samsung ties up with Google for Health Connect, a common health and fitness platform for the Android ecosystem
Google bans 3rd party call-recording apps from May 11, 2022: How to still record calls on Android phones
Advertisements