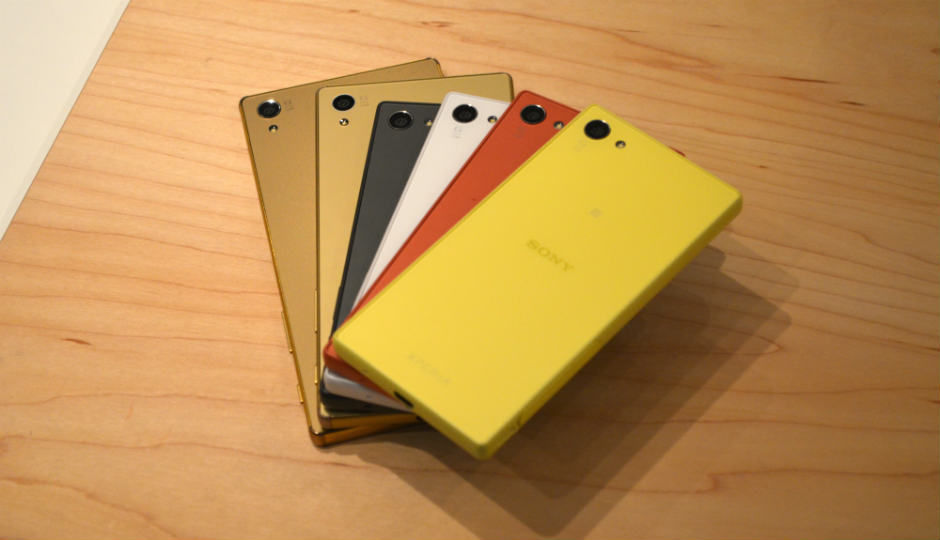 Sony launched three new flagship phones at its event at IFA yesterday. The company announced the Xperia Z5, Z5 Compact and the Z5 Premium phones at the event. Sony has some serious hardware packed into these phones, and who can discount the world's first 4K display on a smartphone right? 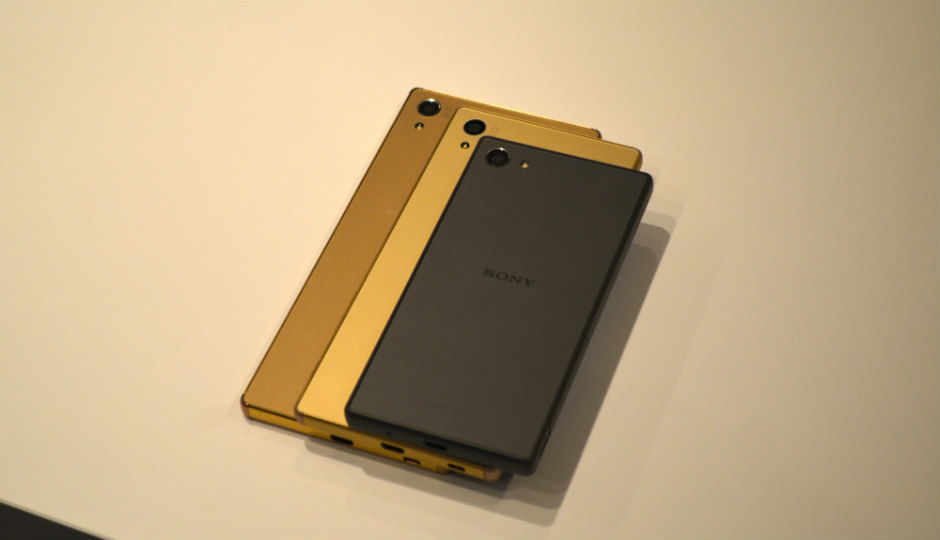 Let’s take a look at the key specs of the three phones. All three have identical specs, differentiated by the display and battery rating. 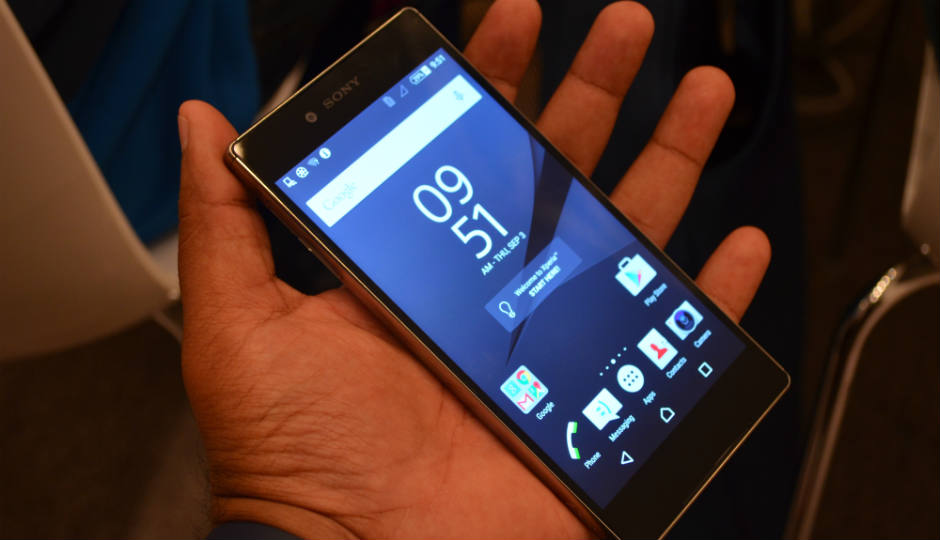 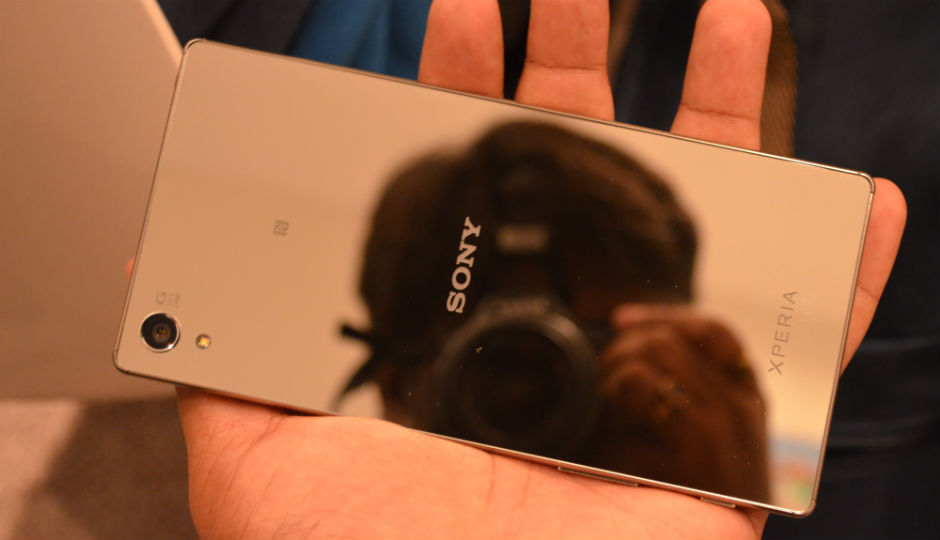 Sony has put a glass back on the Xperia Z5 Premium, which is very reflective as you can see here. It catches fingerprints quite easily as well. Of course, the reflectiveness is added intentionally by Sony. 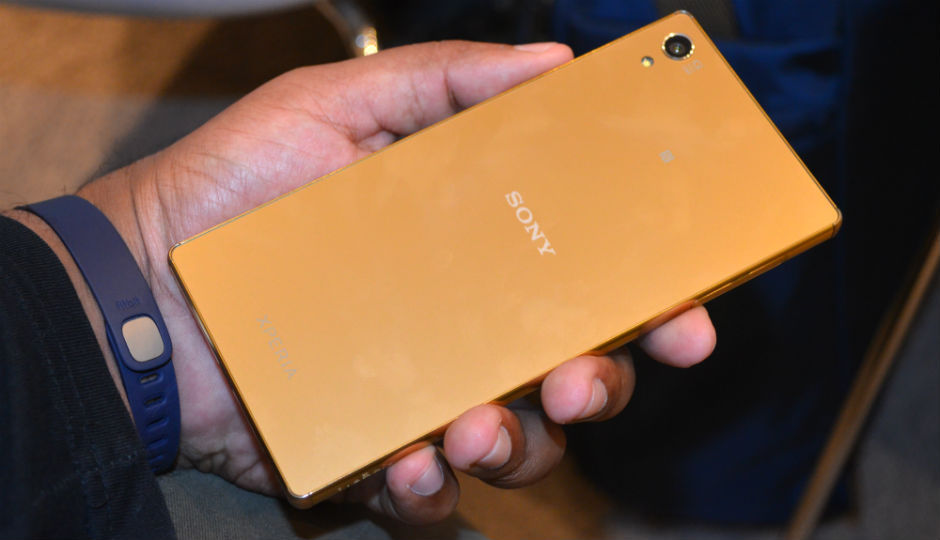 While all three phones have glass backs, the other two phones, the Xperia Z5 (shown here) and the Xperia Z5 Compact don’t have as reflective backs as the Z5 Premium. 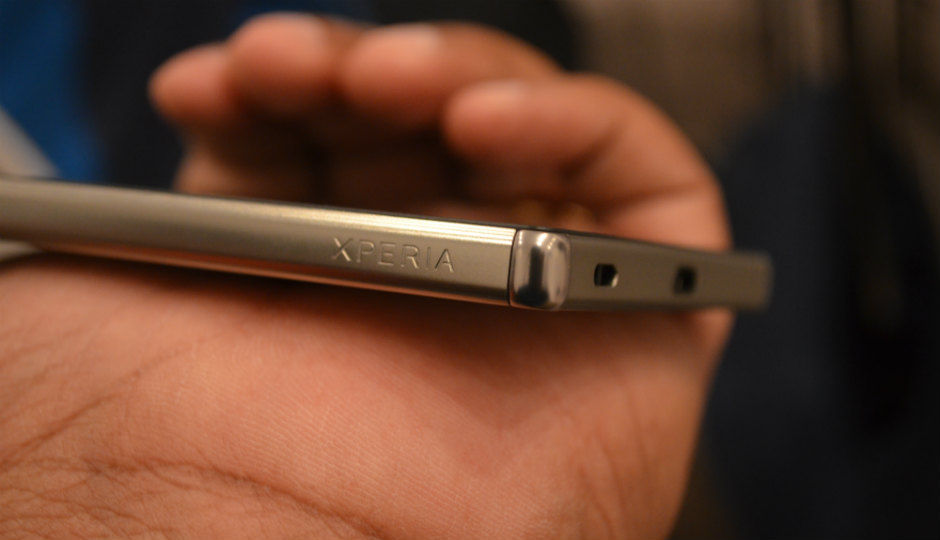 All three phones have a metal frame around the sides. While the Xperia Z5 and Z5 Compact have an aluminum frame, the Xperia Z5 Premium boasts a stainless steel frame as shown here. 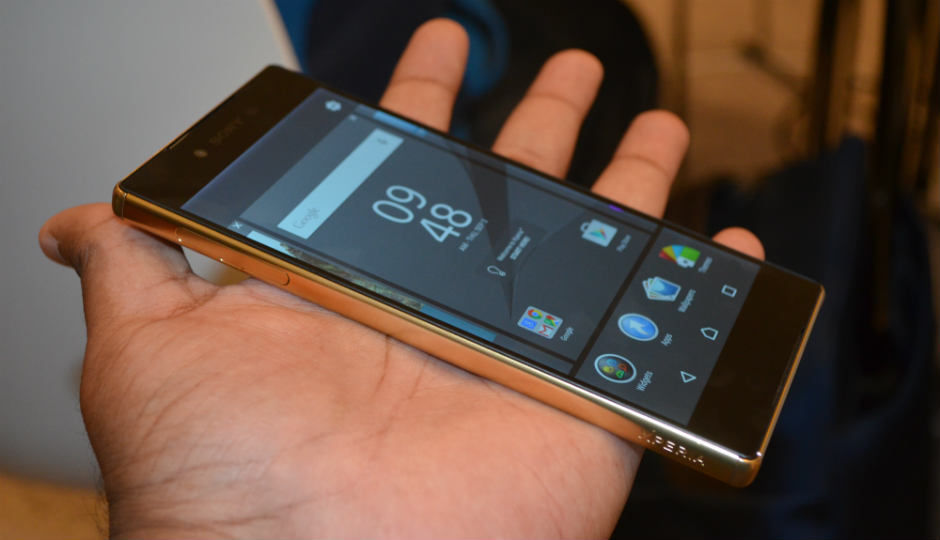 This is the Xperia Z5, which has a 5.2-inch 1080p display. The smaller Xperia Z5 Compact looks similar but has a 4.6-inch 720p display. All the new phones have a similar port layout, The flap on the side hides the SIM card slot as well as the microSD card slot. Of course, Sony's new waterproof-USB ports are also present on all three phones. 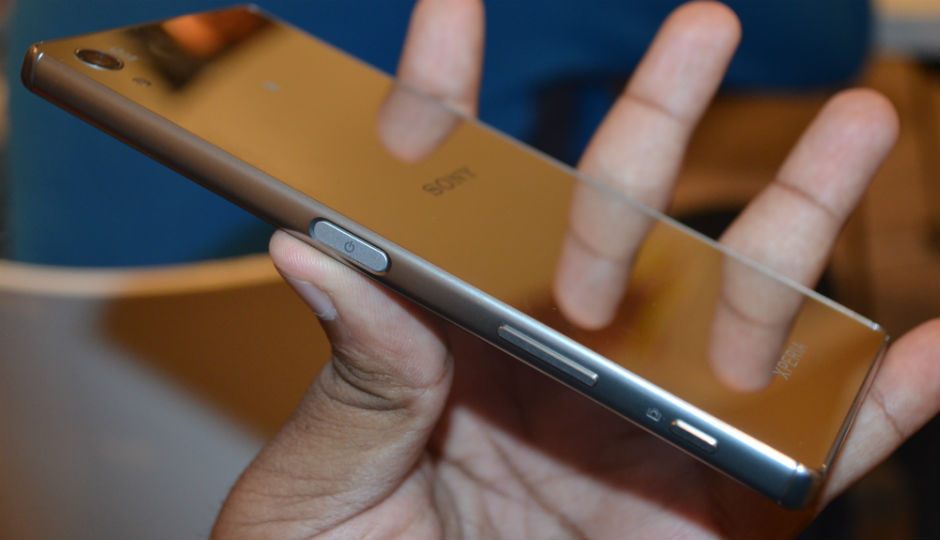 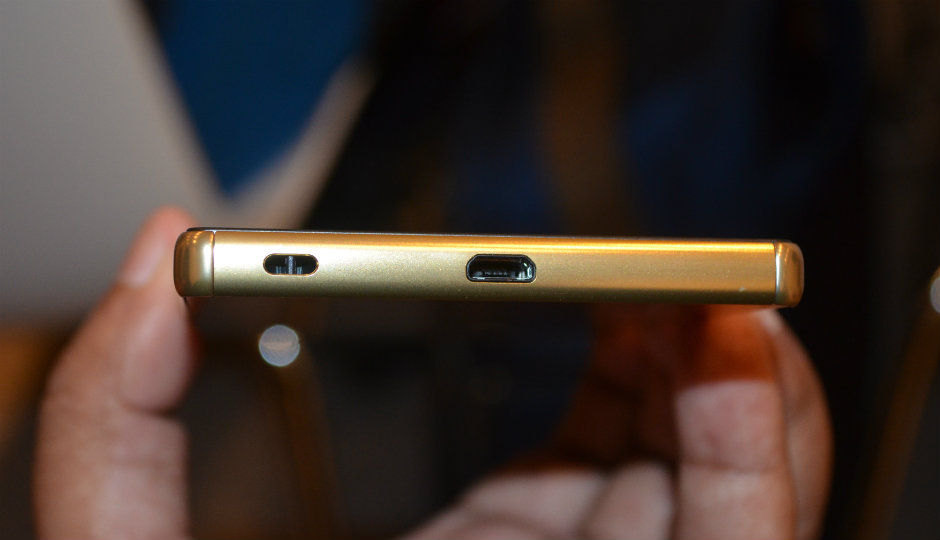 The bottom of the phone has the usual waterproof micro-USB port and a lanyard hole. 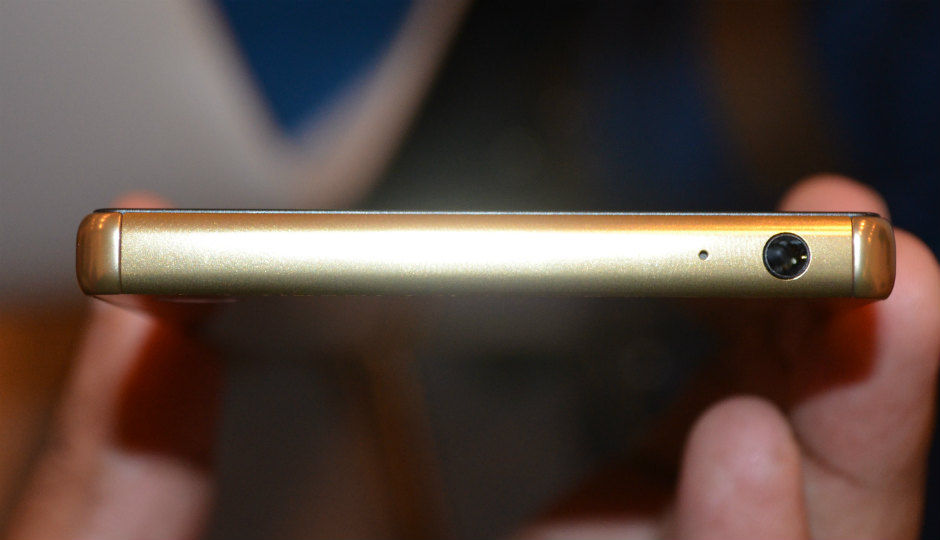 The top of the phone has the 3.5mm headphone jack. All three phones are IP68 certified, which means that they are water and dust proof. 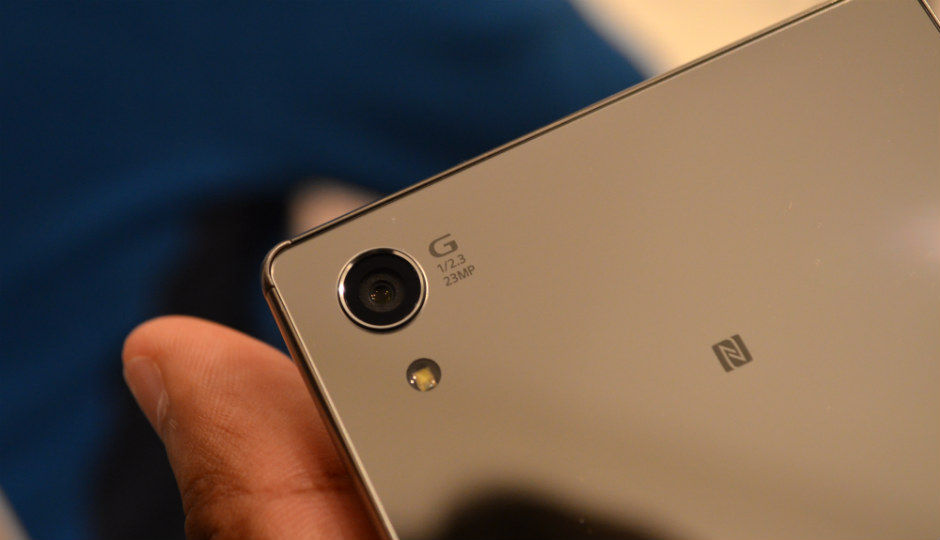 There is a 23MP camera at the back, which has phase detection autofocus with 5X zoom. Sony claims this is the best smartphone camera today. The ISO levels are at 12,800, which was first seen in the Xperia Z3. 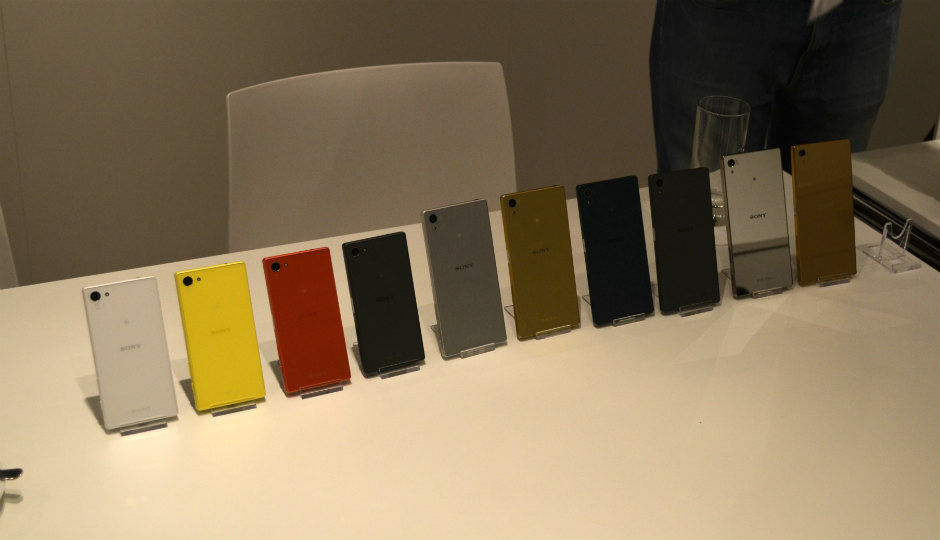 The phone will be available in a number of colours. To be precise, 4 colours each for Xperia Z5 and Z5 Compact, and 3 colours for Xperia Z5 Premium.