Best of CES 2019: In-pictures roundup of the coolest tech spotted on the show floor 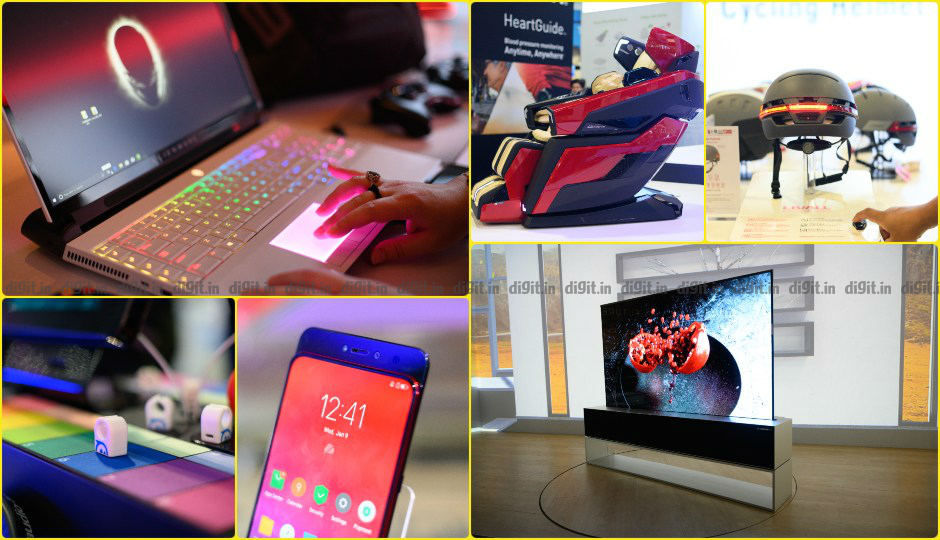 CES 2019 is just about wrapping up in Las Vegas and days of walking around on the showfloor, bringing you all the cool new tech of this year was a whole lot of fun for us at Digit. This year, CES was all about seeing the fruition of years of research and development in the form of release-ready products. Be is rollable displays or the ultimate gaming gear, or even flying taxis, CES 2019 was a visual treat for tech enthusiasts and end consumers alike. So let’s take a look at some of the best tech we managed to spot on the expansive show floor here at Vegas.

Photographed by Swapnil Mathur for Digit.in 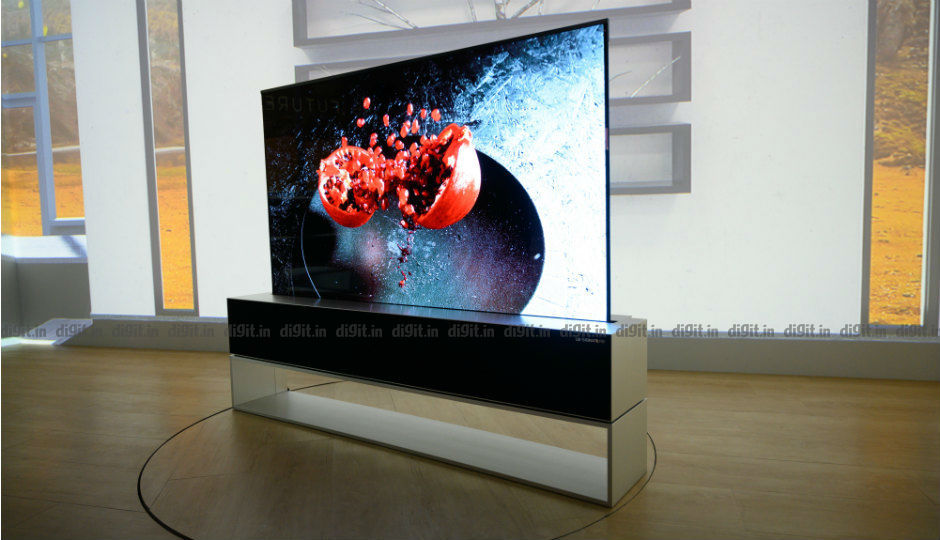 LG’s Rollable TV finally got a name and release timeline at CES 2019. The LG OLED TV R with a 65-inch panel that rises from its housing at the press of a button will go on sale sometime later this year. The TV boasts of a 100-watt Dolby Atmos speaker. All the connectivity options are hidden behind the housing. LG has officially made the move to HDMI 2.1 and the feature is available on the rollable TV as well. 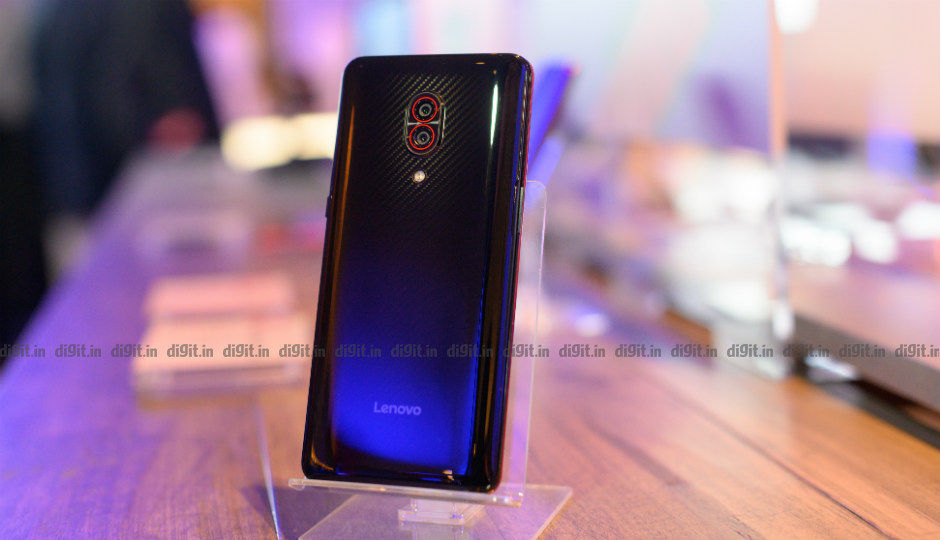 The Lenovo Z5 Pro GT became the first phone with the new flagship Snapdragon 855 processor to be showcased openly at CES 2019. The phone marks Lenovo’s comeback into the flagship smartphone race and features a slide out from camera, helping it achieve a 95% screen-to-body ratio. It gets a 6.29-inch Super AMOLED display, 8GB.12GB RAM to boot, and a 16MP + 24MP dual primary camera setup. You can read our first impressions of the phone here. 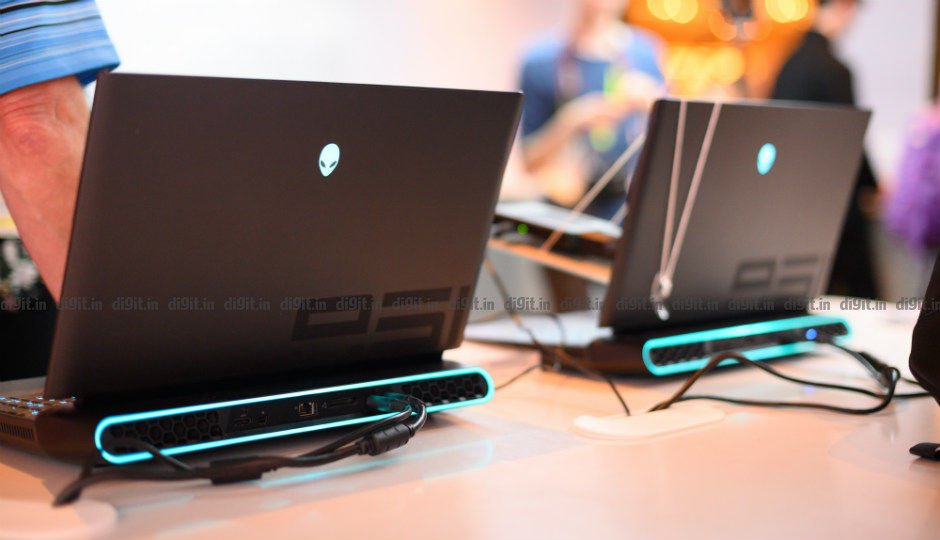 At CES 2019, Alienware got a brand makeover, and it's called Alienware Legend. The first product to wear it is the Alienware Area-51m. The new design uses a new thermal and cooling technology to not just achieve but sustain overclocked performance. It features an improved AlienFX lighting system, slim bezels around the display, and a new “three-knuckle hinge” that reduces footprint but increases assembly strength. The new Legend design comes in two finishes: Lunar Light and Dark Side of the Moon. 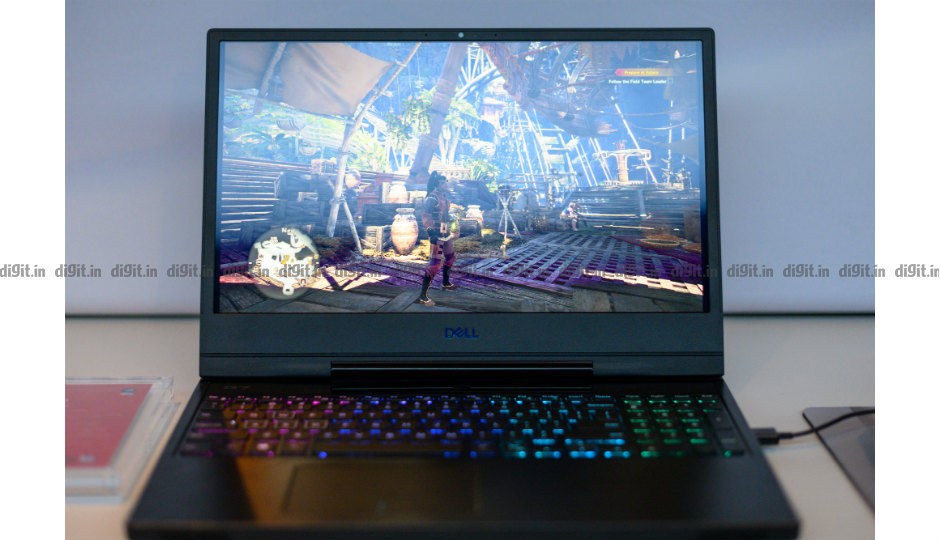 The new Dell G7 is available in 15-inch and 17-inch variants. Both employ 8th Gen Intel Core series processors and NVIDIA graphics under the hood. The display the G7 comes with a refresh rate of 144Hz and supports NVIDIA G-SYNC. It comes with Alienware Command Center and a four-zone backlit keyboard with RGB colour customisation. 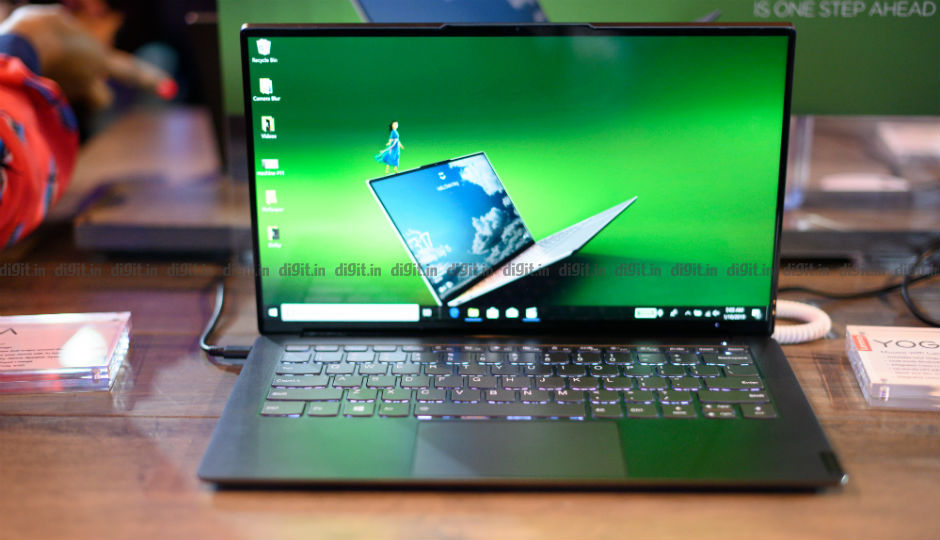 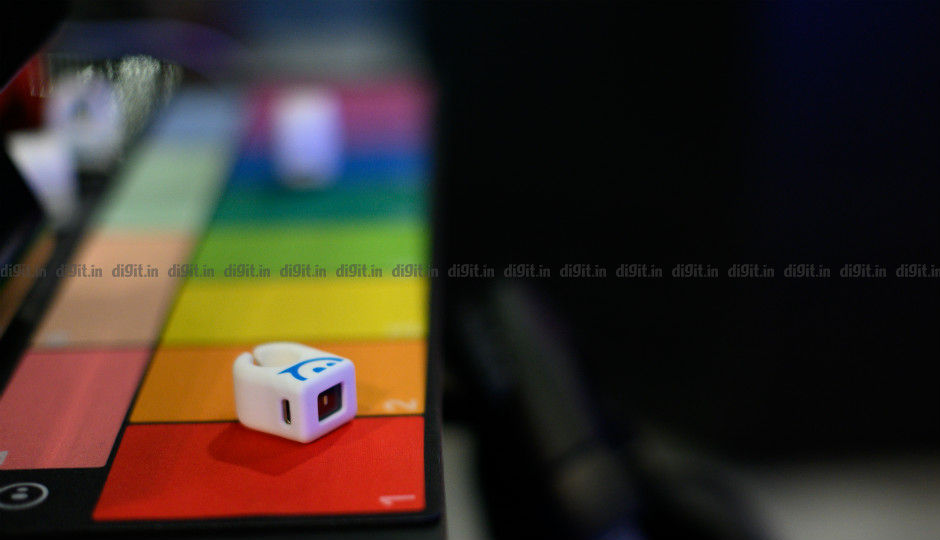 We love finding cool, innovative products at CES and the Sphero Specdrums from robomaker Sphero was one such gadget. It is a silicone ring which features motion and light sensors. The ring is accompanied by a color play pad and when you tap the ring on the pad, it produces sounds from various musical instruments. The ring can connect to the Specdrums app through Bluetooth and users can choose between 100 different instruments to generate sound, including - keyboard, drums and more. 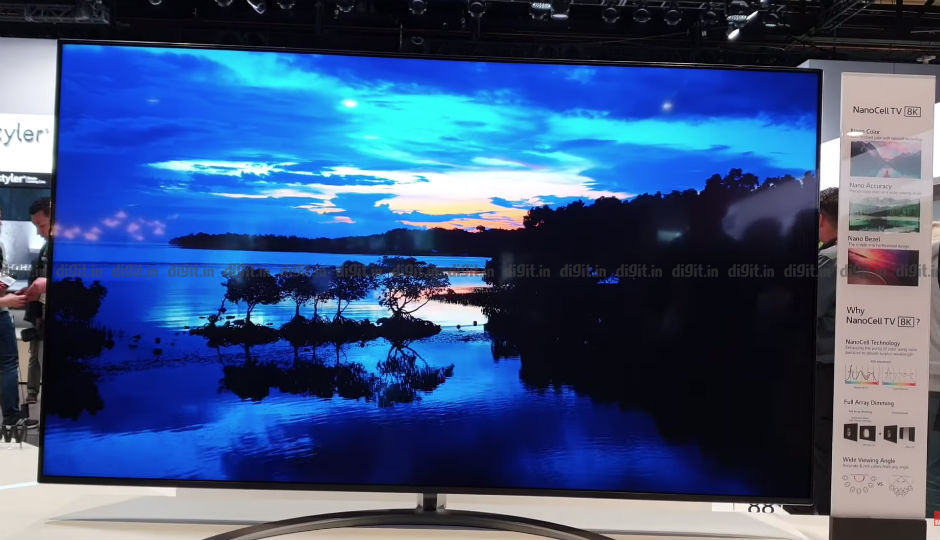 LG announced its 2019 TV line-up and the new line-up of TVs are powered by the company’s second-generation Alpha 9 processor. That’s not all. The LG TVs are the first to support the HDMI 2.1 standard. The  75-inch TV seen in this image boasts of an 8K resolution and NanoCell technology (NanoColor) which claims stellar color precision thanks to nano particles. According to LG, the “NanoCell TVs also offer AI-enhanced picture and sound, powered by a deep learning algorithm, as well as the streamlined experience offered by ThinQ”. 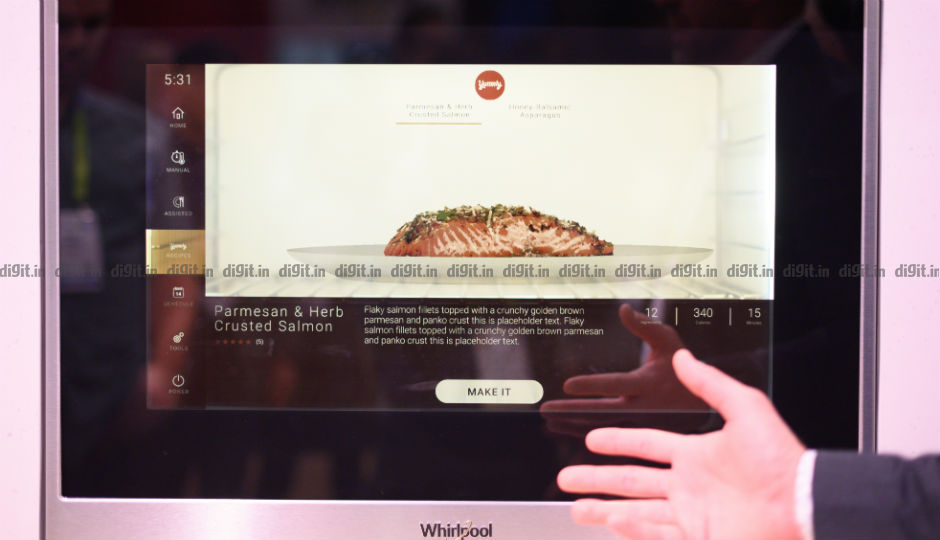 This year, CES was big on smart kitchens and connected homes. Whirlpool showed off what it calls the Connected Hub Wall Oven Concept. In place of a traditional window glass oven door, the 27-inch transparent LCD touchscreen on the oven lets users discover, learn, and control the cooking process from a central hub. As the kitchen hub, the oven will offer integration with family calendars. If it sees multiple evening commitments, but a 45-minute window for dinner together, it will prompt a quick recipe that meets the night’s needs. It also features step-by-step instructions and a bunch of other smart functions for the modern day kitchen. 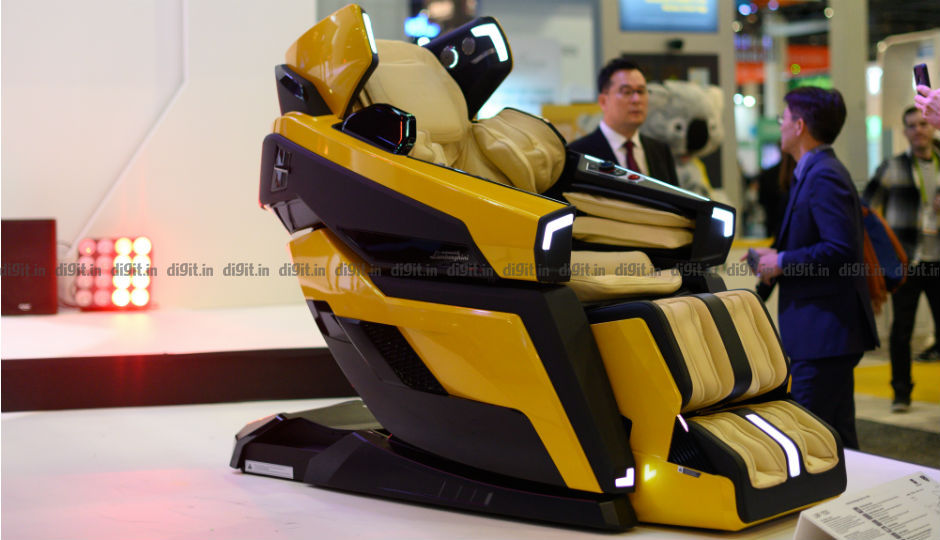 Walking around all day at CES can be quite tiring and on one such day, we came across BodyFriend's Lamborghini Massage Chair. It looks like a transformer and is inspired by the Lamborghini Aventador. What is does is what most massage chairs do, however putting one of these $30,000 babies at your place would definitely get you a lot of attention, probably too much for your own good. 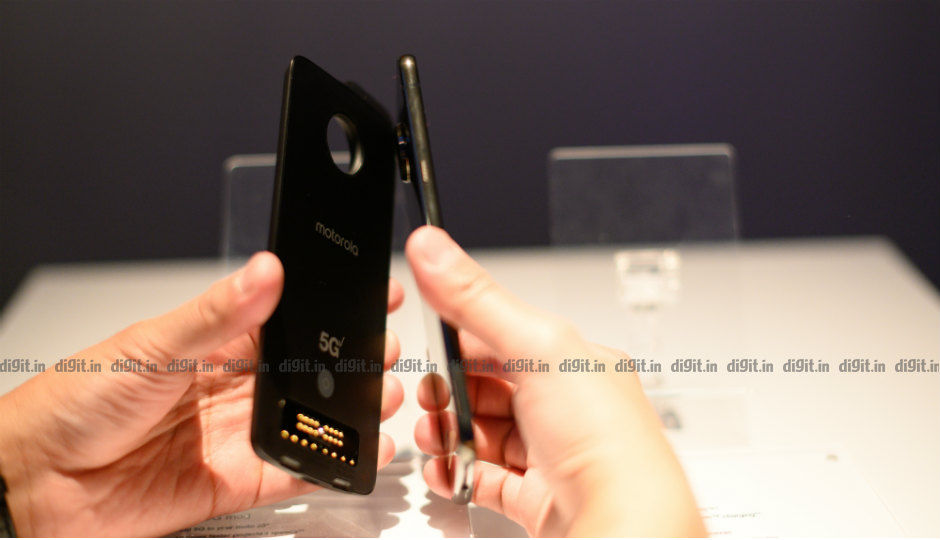 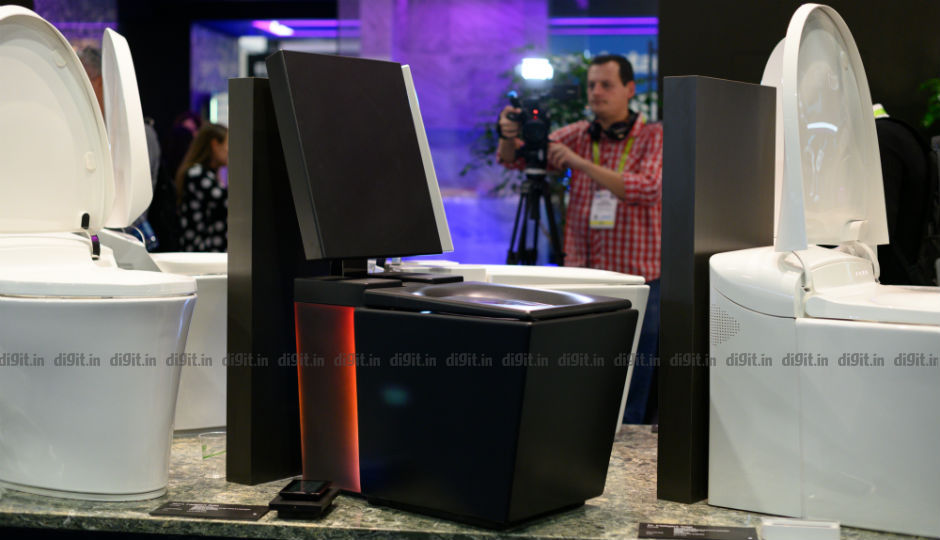 Looking to make things in the bathroom a little more interesting? If the Kohler Numi 2.0 tickles your fancy, then get ready to shell out $8,000 (Rs 5,63,150 approx) for a toilet that offers personalised cleansing and dryer functions, a heated seat, built-in speakers, Amazon Alexa for all your queries as well as multi-coloured ambient and surround lighting. Also, this Black version of the toilet looks like something Darth Vader would have in his loo. 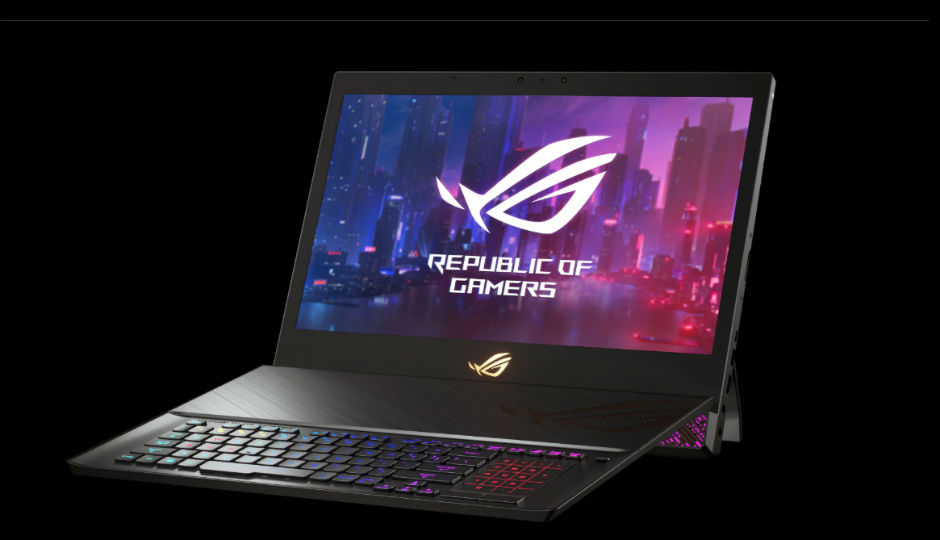 At CES 2019, Asus unveiled a desktop replacement laptop for gamers in the form of the 4.7Kg Asus ROG Mothership. The laptop features a detachable and foldable RGB backlit keyboard, a 17.3-inch FHD (1920x1080) IPS-level panel with a 144Hz refresh rate, 3ms response time, 100% sRGB colours, G-SYNC for smoother gameplay, NVIDIA GeForce RTX 2080 with 8GB of dedicated GDDR6 VRAM, Intel Core i9-8950HK CPU which can be overclocked to run at 4.8 GHz and up to 64GB of DDR4 RAM. Yes, it is a beast of a machine. 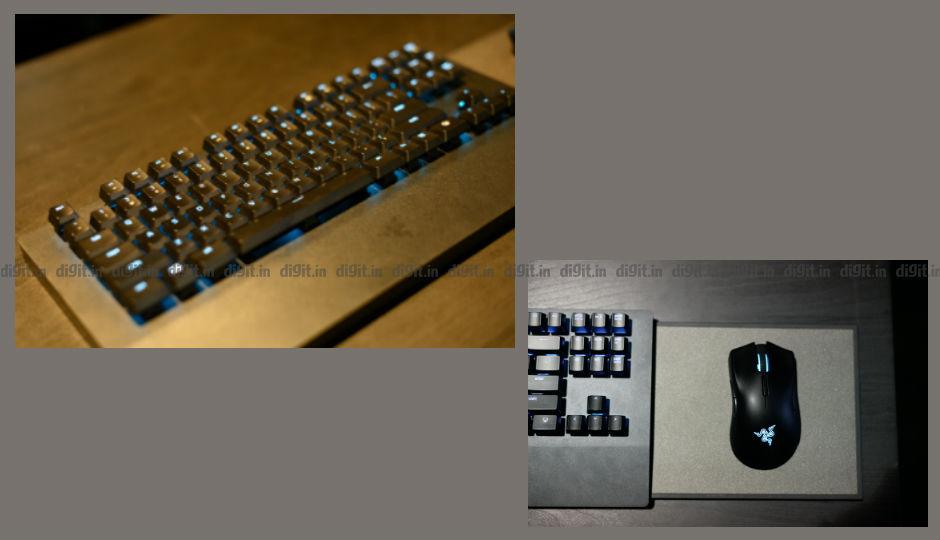 Razer Turret for Xbox One

Razer partnered with Microsoft to launch the Razer Turret keyboard and mouse for the Xbox One and we managed to get our hands on them at CES. Razer Turret  is definitely a good looking pair and comes with dedicated features for the Xbox One to leverage on its capabilities for console. Armed with Razer Chroma and Xbox Dynamic Lighting, the Razer Turret lights up in sync with your game as you play. The dedicated Xbox key offers instant access to the Xbox One dashboard. A single unified dongle connects both the keyboard and mouse to the Xbox One wirelessly. The duo cost $249 and are up for pre-order in the US right now. 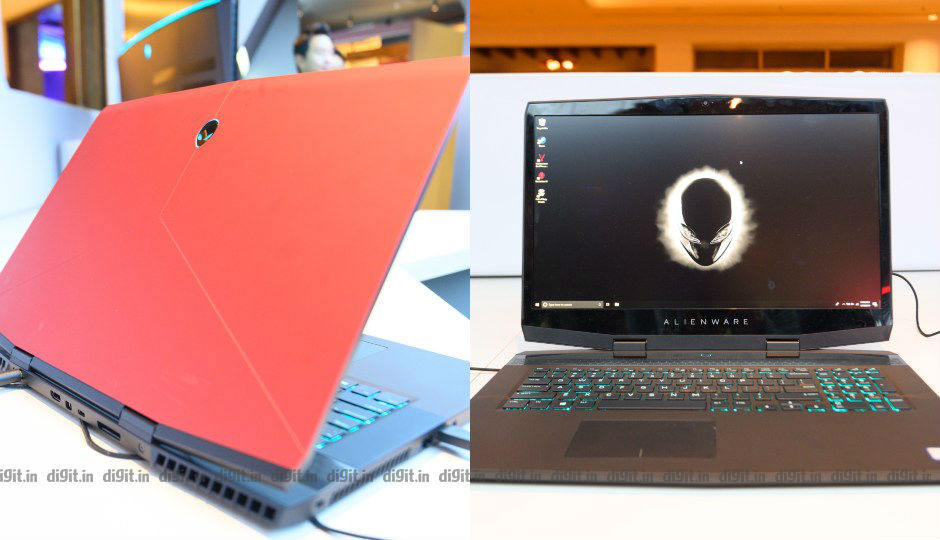 Alienware also launched the Alienware m15 and the Alienware m17 at CES 2019. As the model names suggest, the m15 is a 15-inch model for gamers seeking portability, while the m17 is a 17-inch model. Both the laptops feature Intel 8th Gen Core i5 and Core i7 CPUs with dynamic CPU overclocking. According to Alienware, there’s elevated thermal headroom on offer because of the proprietary Cryo-Tech Cooling technology. There’s also a variant of the m15 which features NVIDIA GeForce RTX 20 series GPUs. 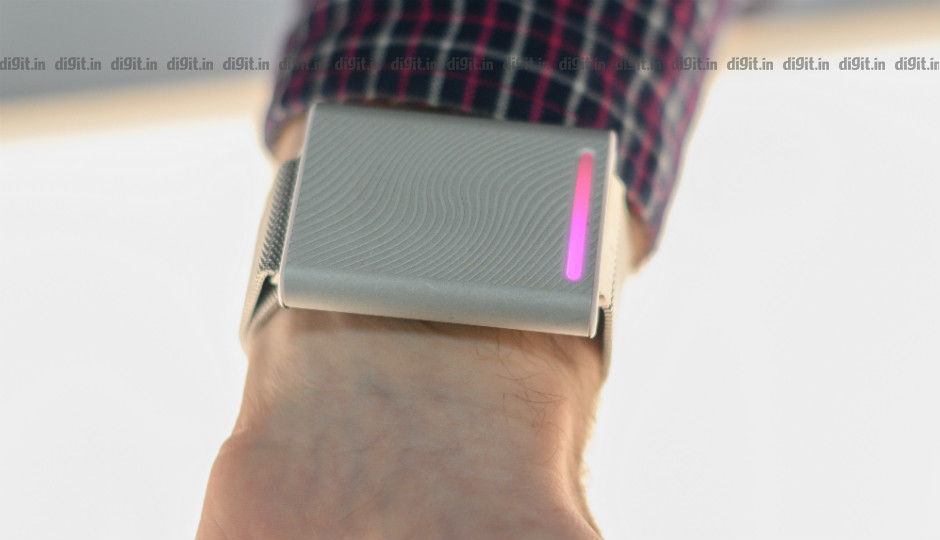 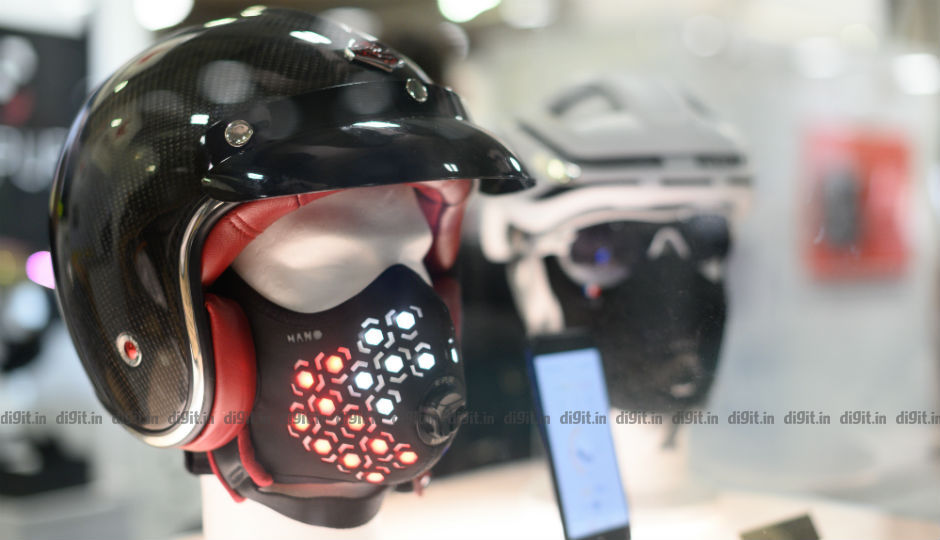 R-Pur is an anti-pollution mask for bikers, runners and cyclists. It can fit under any helmet and has three parts that make up the mask - A filter to sift out nanoparticles, the mask itself that engulfs the filter and an extraction valve to let hot air out. The mask can connect to an app which can ascertain its the filter life and prompt users if it needs changing. 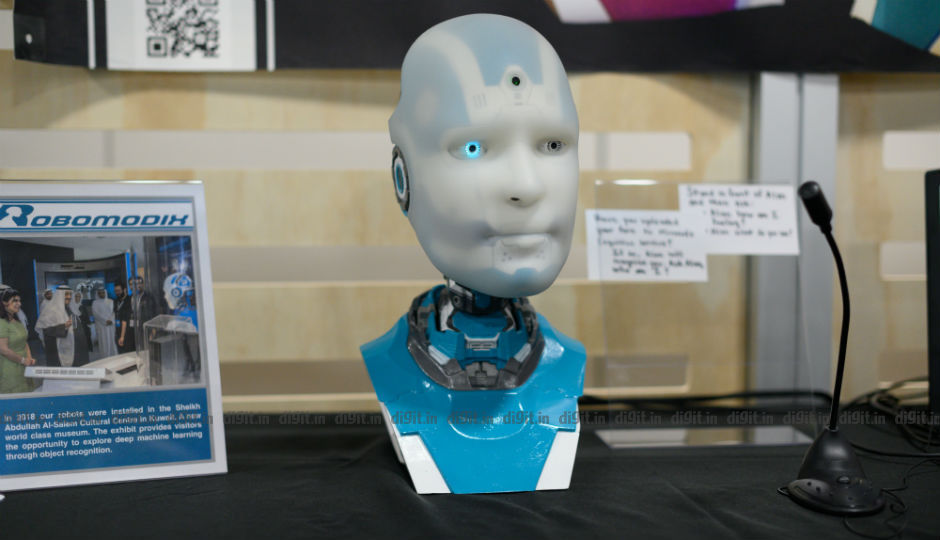 Alan and Alena from Robomodix

Alan and Alena are two social robots from Robomodix, designed to utilise technologies such as deep learning AI, data acquisition, data reporting, object recognition, facial recognition and machine vision surveillance. The Robots are compatible with smart speakers like Google Home, Amazon Echo and Apple Home Pod. The customisable robots have human scale robot heads and shoulders. They are built on an aluminium frame and contain 6 axis motion provided by heavy duty robot Dynamixels and high efficiency PWM servo motors. The robots are built on an aluminum frame for strength and lightweight mobility. 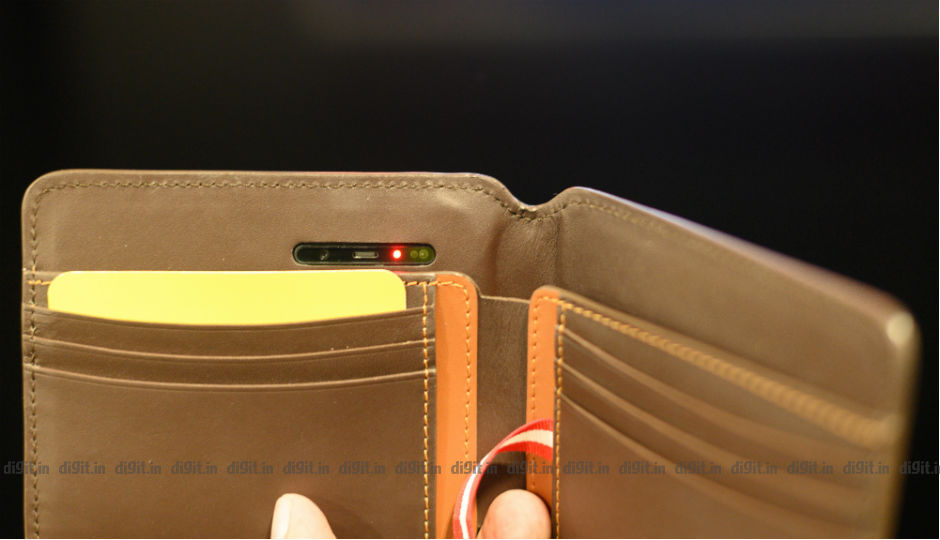 With a built-in power bank, a distance alarm, global GPS tracking, worldwide Wi-Fi hotspot, and an anti-theft camera, the Volterman wallet is smart alright. Originally an Indiegogo crowdfunding project, the Volterman wallet will be present on the CES 2019 showfloor, overkilling with its long list of features which are definitely designed for the paranoid wallet owner. The project was crowdfunded for a total of $2,772,210 last year in August and a single Volterman cardholder is priced at $115, going all the way up to $179 for a travel sized wallet. 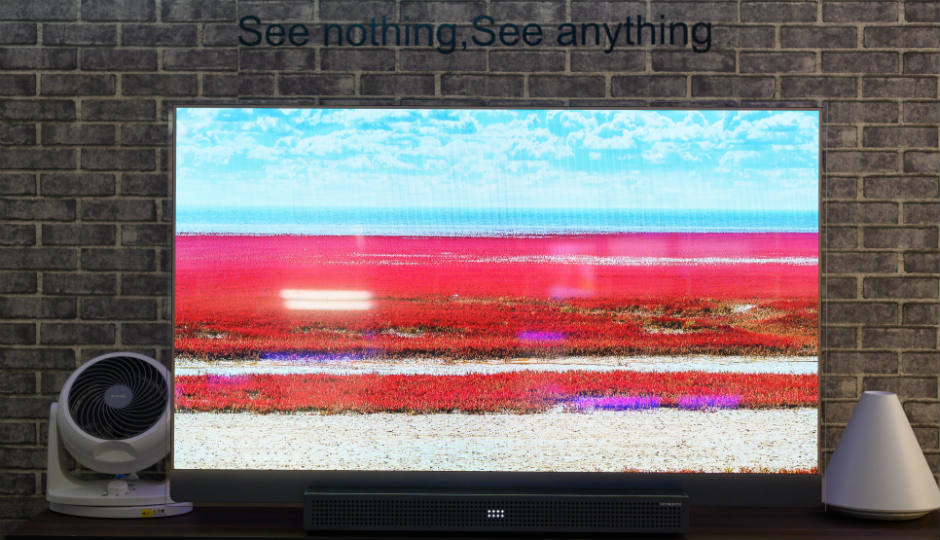 TV innovation at CES was off the charts. While LG’s rollable TV and Samsung’s MicroLED TVs stole the show, Skyworth also showcased a gorgeous OLED TV in the form of its 55-inch and 77-inch Transparent TVs which have absolutely no bezels. It is a 4K UHD TV with Dolby Vision, HDR 10 as well as a JBL Audio System. 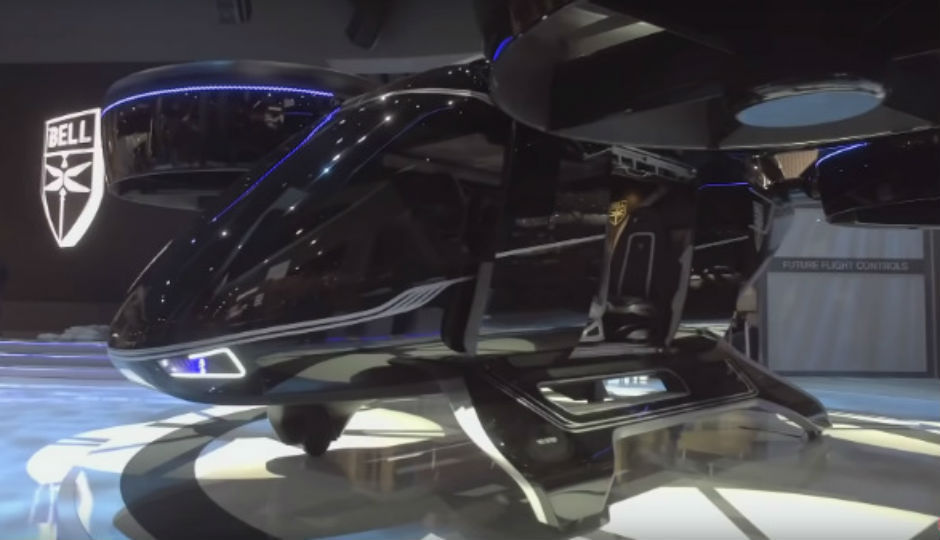 Bell Nexus is the flying taxi vision of the future. It could be the first flying Uber that you take once it hits the airways. The Bell Nexus uses a hybrid-electric propulsion system and features vertical-takeoff-and-landing (VTOL). Garmin International, Inc. is currently working towards the development and integration of an autonomous vehicle management system for it. Thales, on the other hand, is taking care of flight controls on the Bell Nexus.