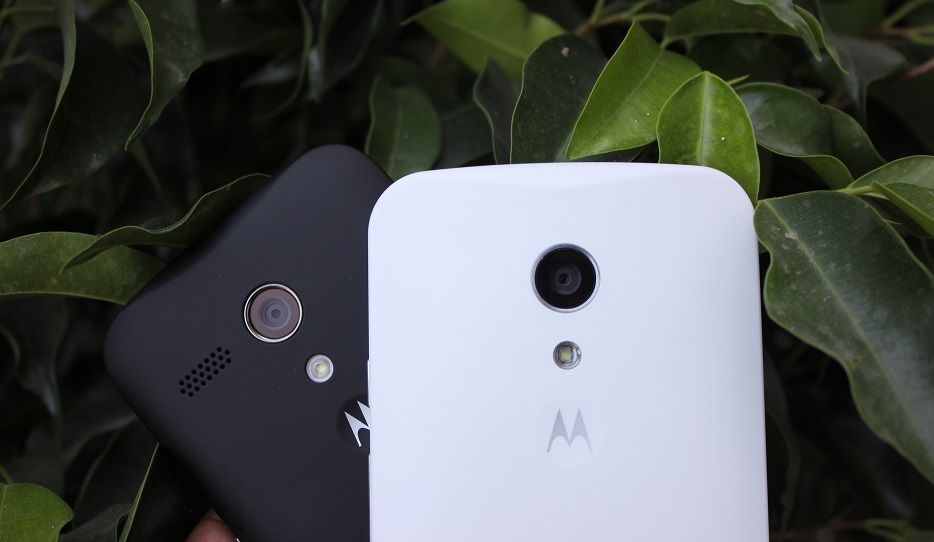 The 2nd generation Moto G isn't a major upgrade to the original Moto G. Yet, it does have minor design and hardware changes along with a sizeable change in the form factor to differentiate itself from the 1st gen Moto G. Over the next 10 slides, we have compared the new Moto G to the first gen Moto G across all major aspects like- design, display quality, performance, battery life, camera quality and ease of use. 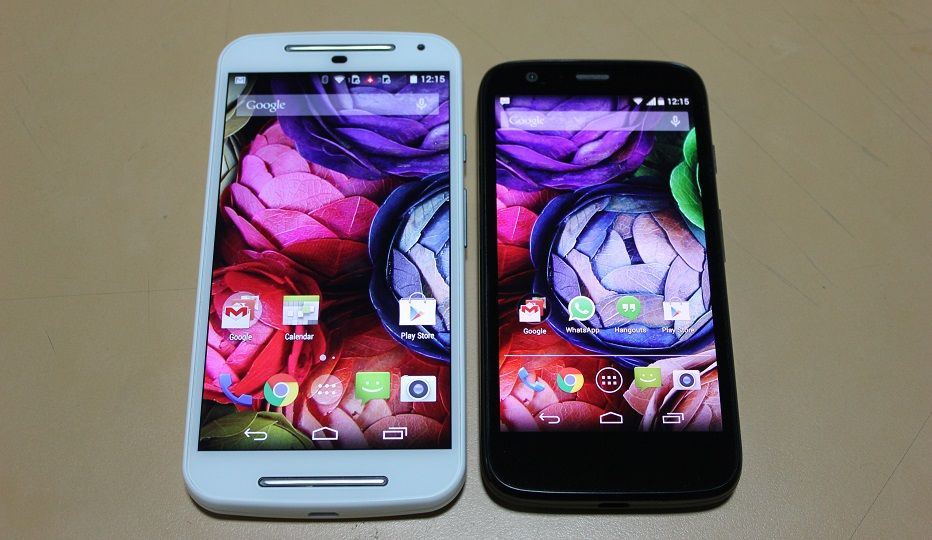 Size: Going from 4.5 to a 5-inch screen does add to the dimensions of the new Moto G. The new Moto G is noticeably taller and wider compared to the original Moto G

Next: Thickness and weight 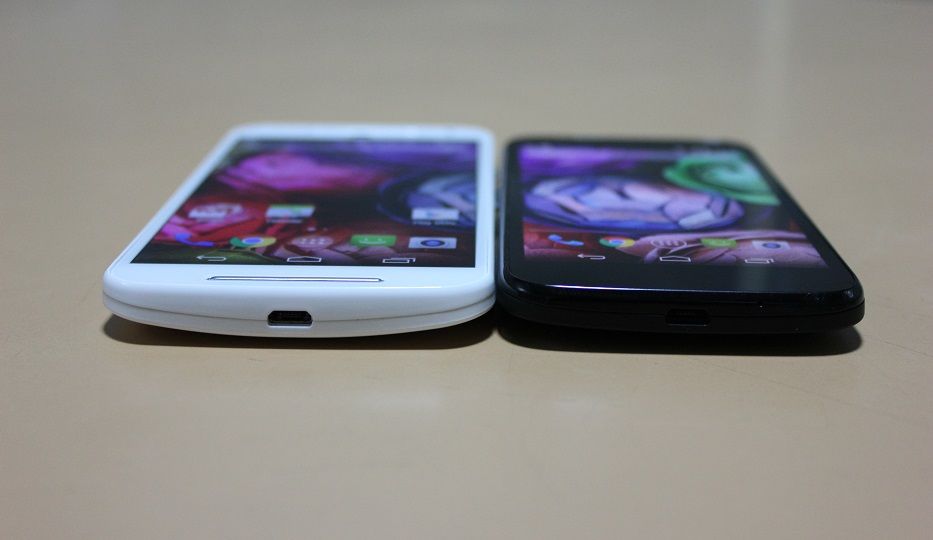 A hair slimmer and feels lighter: Unfortunately, the new Moto G hasn't really slimmed down in terms of thickness, it has shaved off a mere 0.6mm,  measuring 11mm in thickness. On the weight front, the new Moto G is heavier by a mere 6 gms but it actually feels lighter due to the higher volume area, the weight is spread across a larger area, making the phone feel lighter for its size.

Next: Ease of Use and build quality Well built but not as comfortable: 2nd gen Moto G isn't a snug fit for your palm, it does call for an extra effort for one-handed usage. When it comes to build quality and finish, the new Moto G feels better built and slightly more premium. The improvement in looks can be attributed to the design change in terms of evenly sized top and bottom bezels and the dual front speakers. Yes, the new Moto G gets stereo speaker set-up 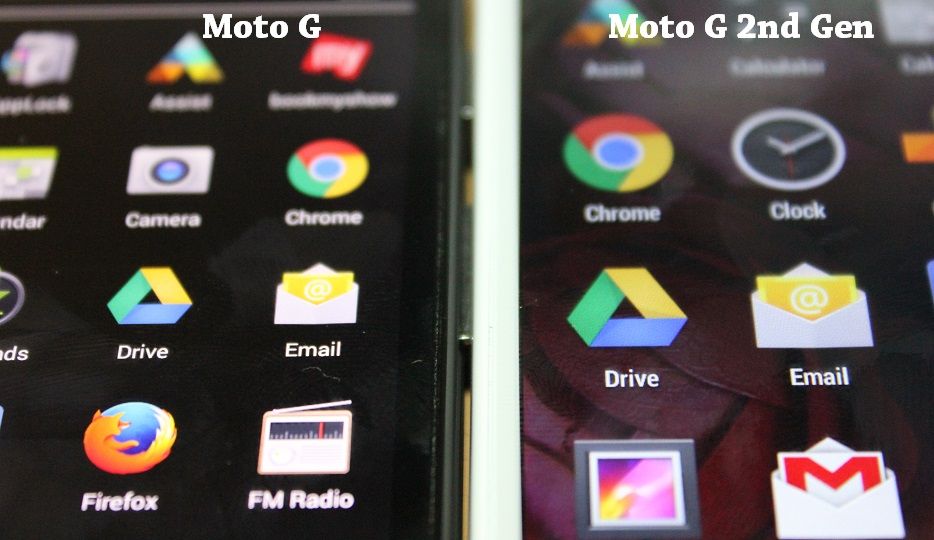 Loss of fidelity: The new Moto G downgrades on pixel density from 326 ppi to 294 ppi. It keeps the resolution intact at 720 x 1280 pixels but spreads it over a larger screen area (4.5 vs 5 inches), causing the pixel density to drop. As a result, the screen appears less sharper, bad news for pixel-peepers.

Next: Screen brightness and contrast 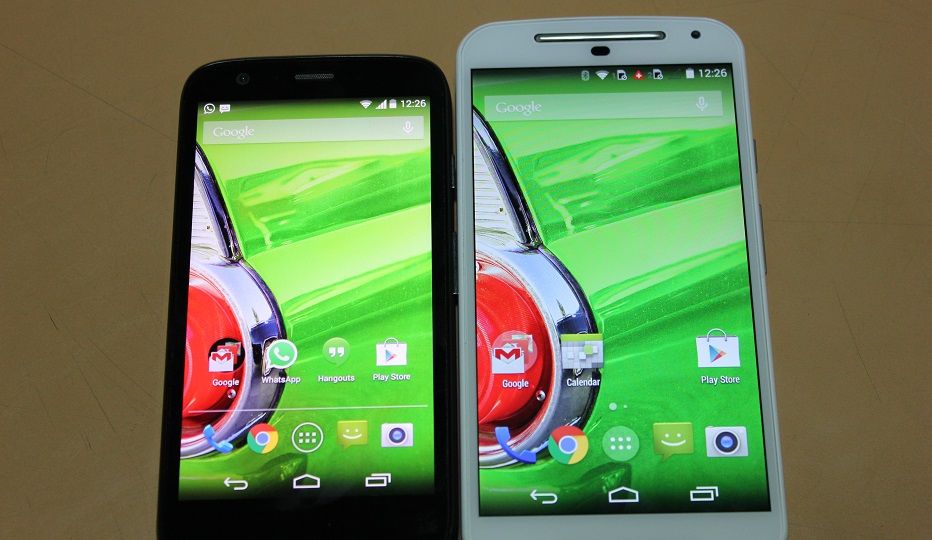 Not so bright: The new Moto G drops the screen brightness to barely acceptable levels, it does have an IPS screen (known for good brightness levels) but the backlight seems to be quite low, especially when you compare it to the first gen Moto G.

FYI, for all our screen tests and analysis we set both the devices to maximum brightness. 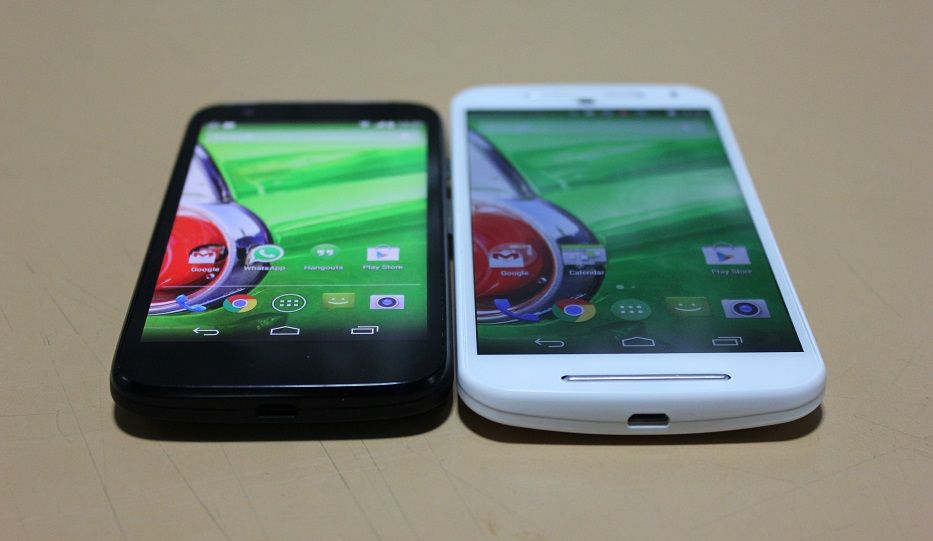 While there is not color shift at extreme viewing angles, the dim screen does impact on its performance when you go beyond 30 degrees. The first gen Moto G was clearly better in the viewing angles department. 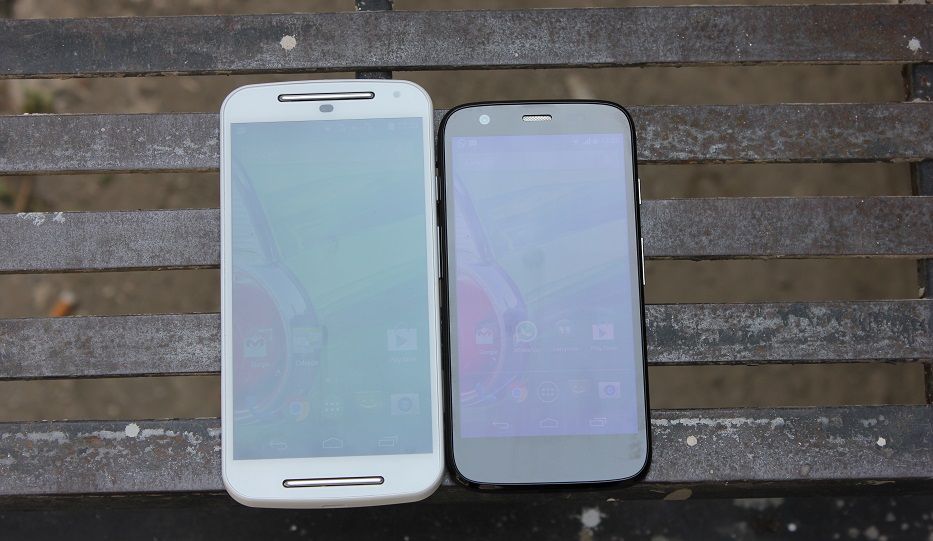 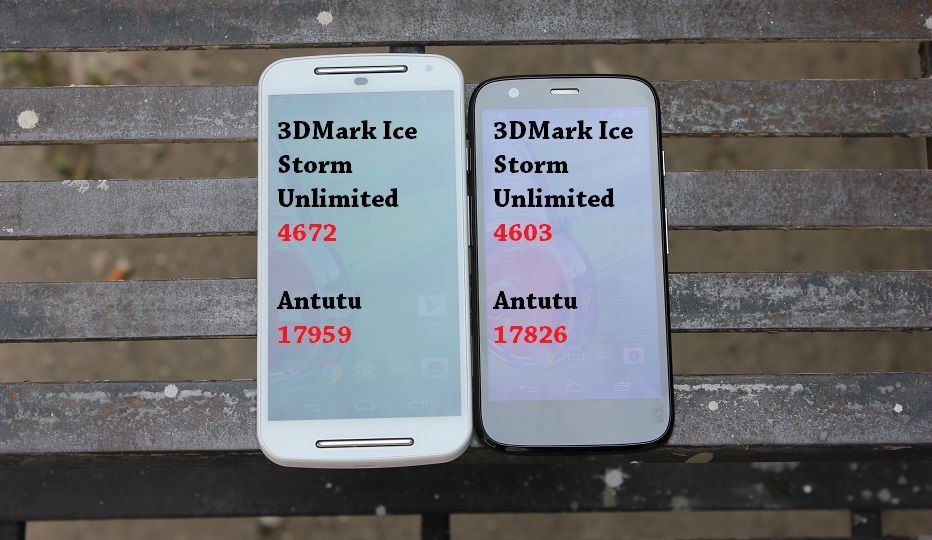 Same SoC, similar performance: Motorola hasn't changed the innards of the new Moto G, it houses the same Qualcomm quad-core Snapdragon 400 SoC and the performance numbers confirm the same. The tiny bump in performance (we ran each benchmark thrice to confirm the tiny performance bump), can be attributed to a slightly faster memory chip(RAM) on the new Moto G. 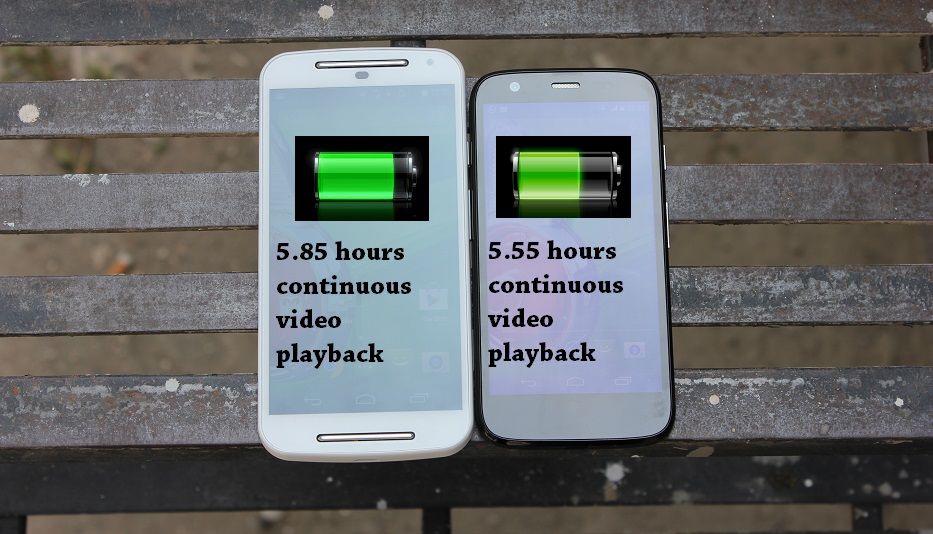 Better but not by much: The new Moto G uses the exact same spec 2070 mAh battery pack as the original Moto G and with a larger screen, one would expect the battery life to be lower, but, on the contrary, we got slightly better performance in our video loop battery test. 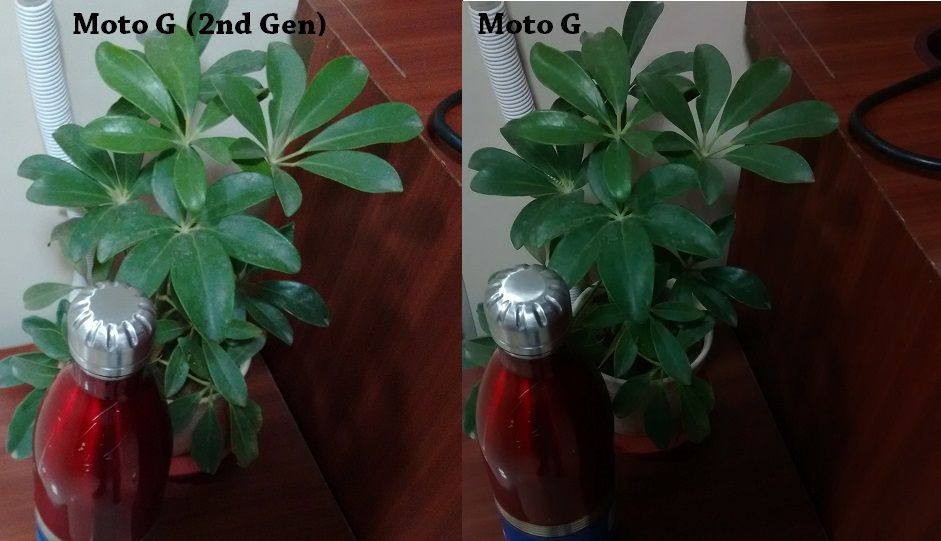 The 8MP camera on the new Moto G is a much needed jump from the earlier 5MP sensor in terms of the MP count. The additional resolution gives you slightly more headroom to crop images. While the image quality is very similar, the low-light performance has improved in the new Moto G 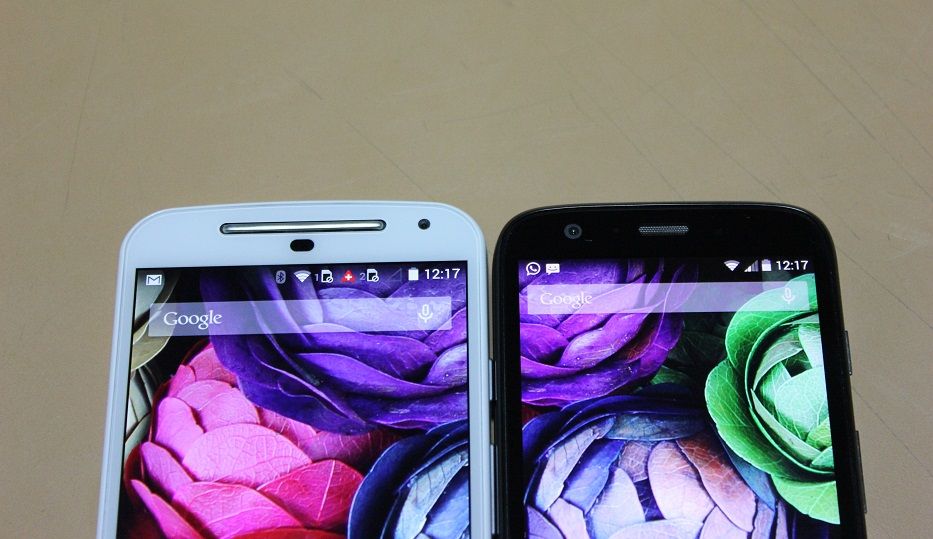 We are left with mixed feelings on the new Moto G. As a standalone device, the new Moto G is a very good smartphone for anyone looking for pure Android experience and timely updates. But, on comparing to the first gen Moto G, we feel Motorola should have given it a little more love in terms of a faster SoC and a better screen.