In Pictures: LG G5 and accessories launched at MWC 2016 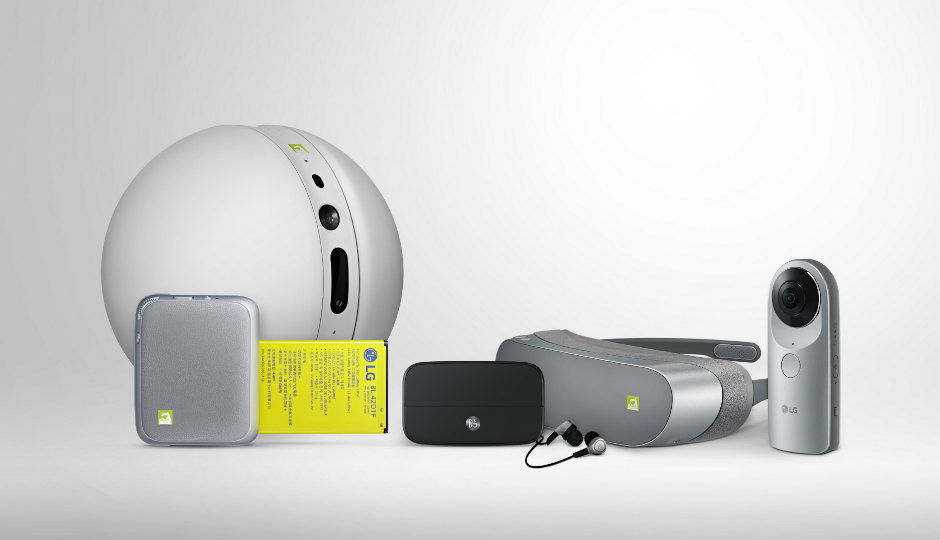 LG has announced its new flagship, the LG G5 at it pre-MWC event. It is a Snapdragon 820 powered smartphone. While the phone does have an all metal unibody design, LG has made it modular and the battery can be removed or replaced. Besides the phone, LG also announced a bunch of new accessories which can be used with the G5. Here's a look. 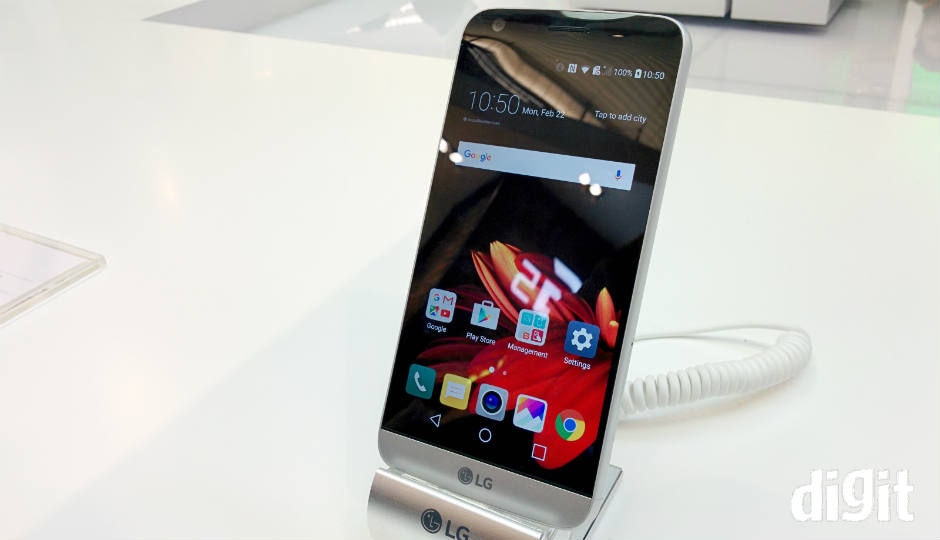 Before we start, here is a quick recap of the specifications: 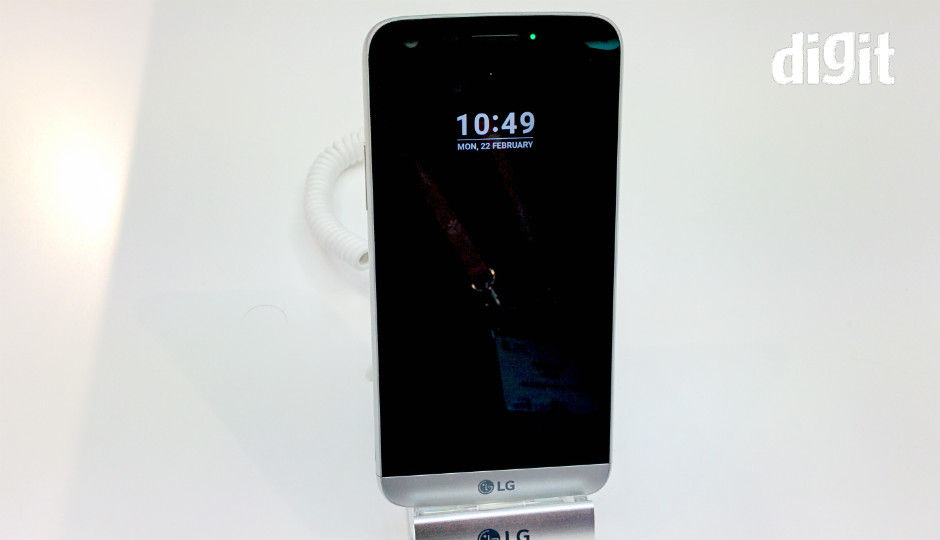 LG is still using an IPS LCD display but it is an always-on intelligent display. It lights only a portion of the display and uses just 0.8% battery per hour. The 5.3-inch display has a resolution of 1440 x 2560p which has a 554 ppi. It also gets a Corning Gorilla Glass 4 protection. 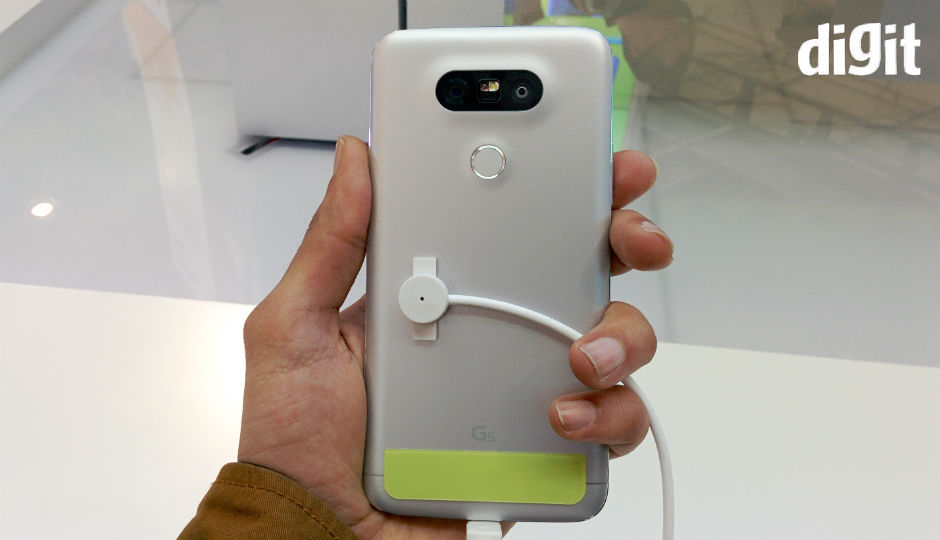 This is the first time LG is using a metal unibody design. It is also a modular design as the battery can be removed. 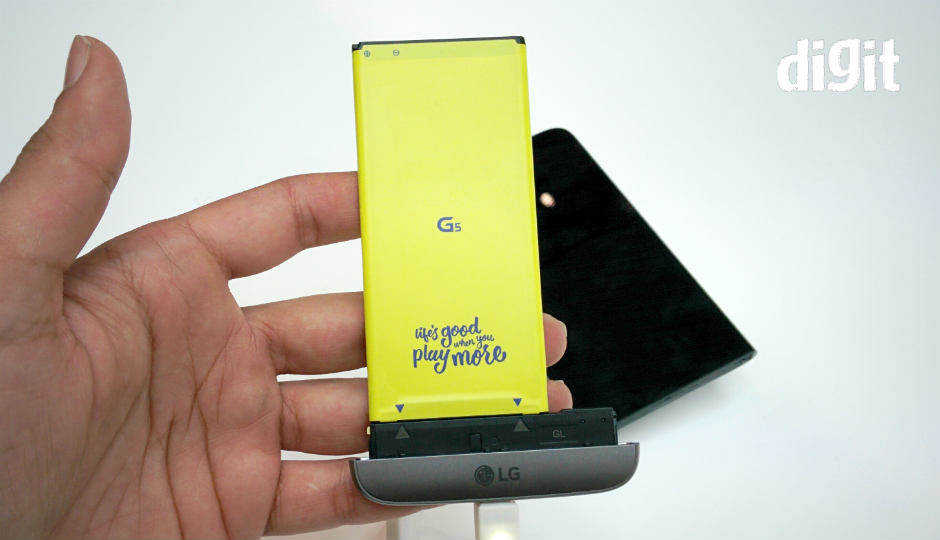 The phone uses a 2800mAh removable battery which supports fast charging thanks to Qualcomm’s Quick Charge 3.0. There is a USB Type-C connector on the phone and it also supports wireless qi charging, which is optional. 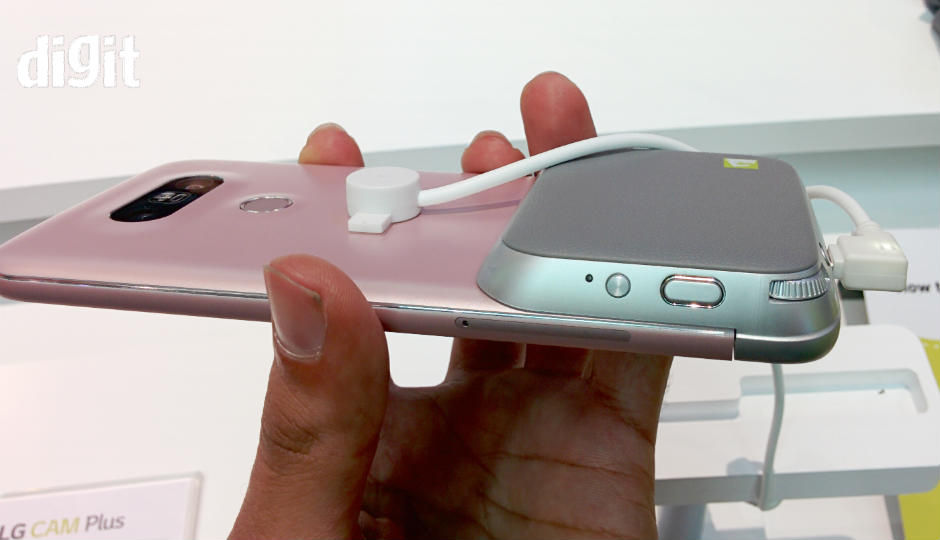 This is the LG CAM Plus is a camera module that can be attached in the battery slot of the device. It offers grip as well as physical buttons for power, shutter, record, zoom, and LED display. In addition, the module increases the battery capacity of the phone by 1200mAh. 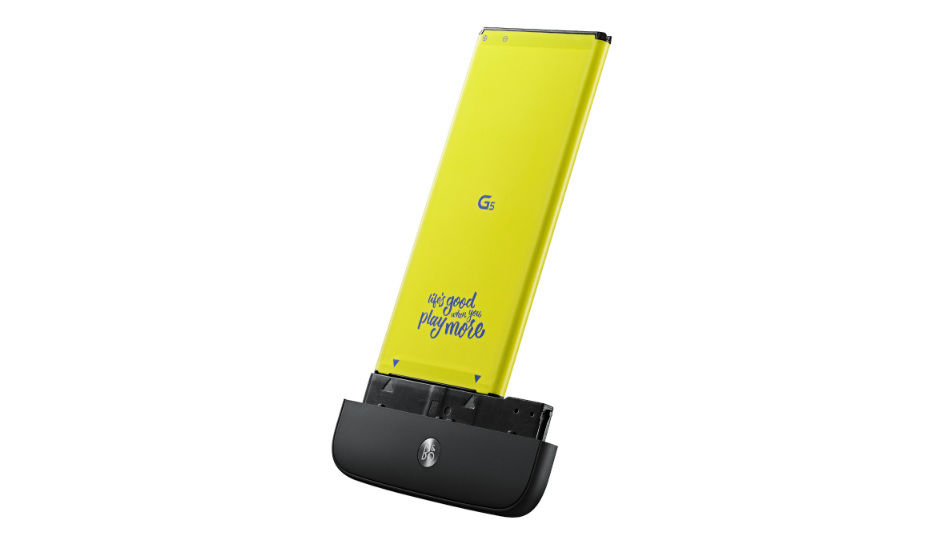 LG also announced the Hi-Fi Plus music module for which it has partnered with B&O Play. It is portable Hi-Fi DAC and supports 32-bit, 384KHz high-definition audio playback. The Hi-Fi Plus can either be attached as a module on the LG G5 or as a Separate Hi-Fi DAC by connecting it to any smartphone or PC. 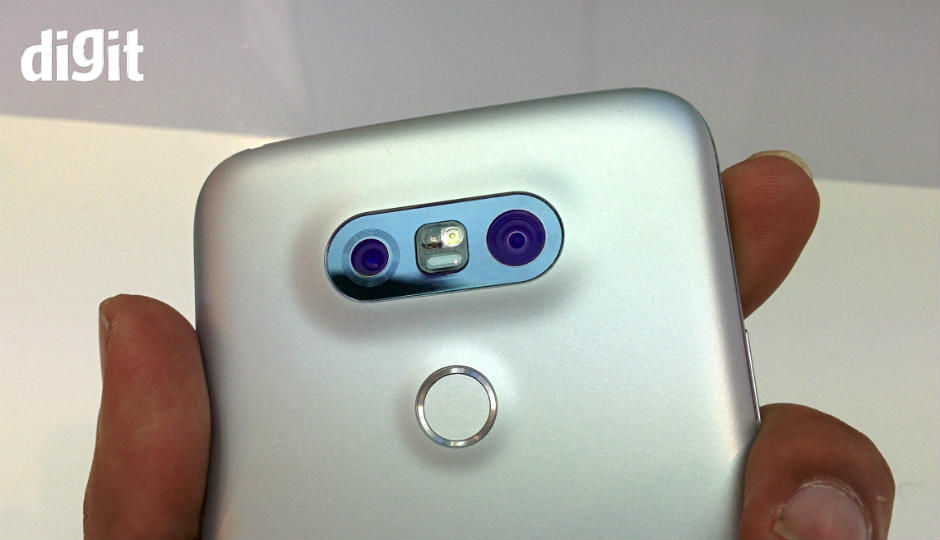 For the primary camera of the LG G5, LG has gone with dual camera setup. There is a 16MP camera with f/1.8 aperture and an 8MP camera with f/2.4 aperture. The camera is further aided by OIS, laser autofocus and LED flash. 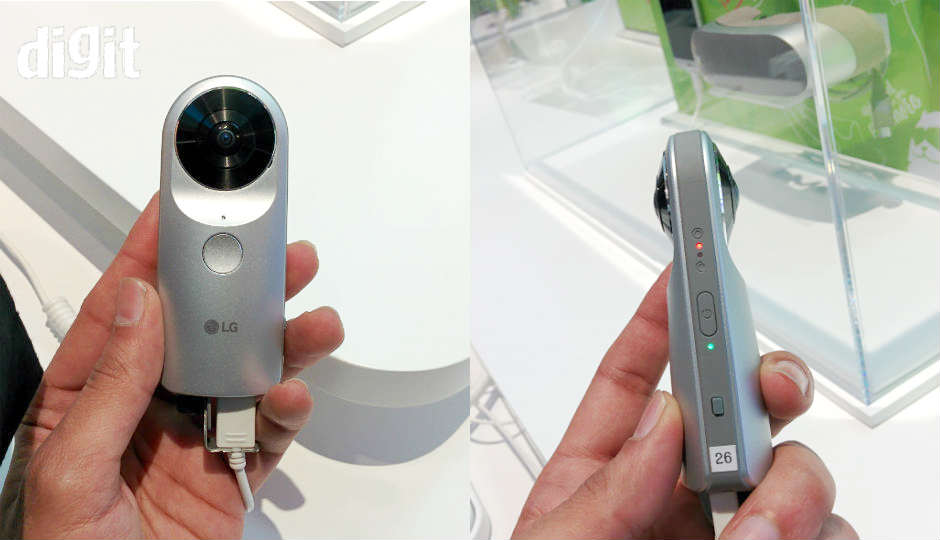 This is the LG 360 CAM which takes 360 degree photographs. The device comes with two 13MP wide angle cameras, and records on a 4GB of internal memory. The 360 CAM can shoot 2K videos with 5.1 surround channel recording via three microphones. It has a 1200mAh battery. 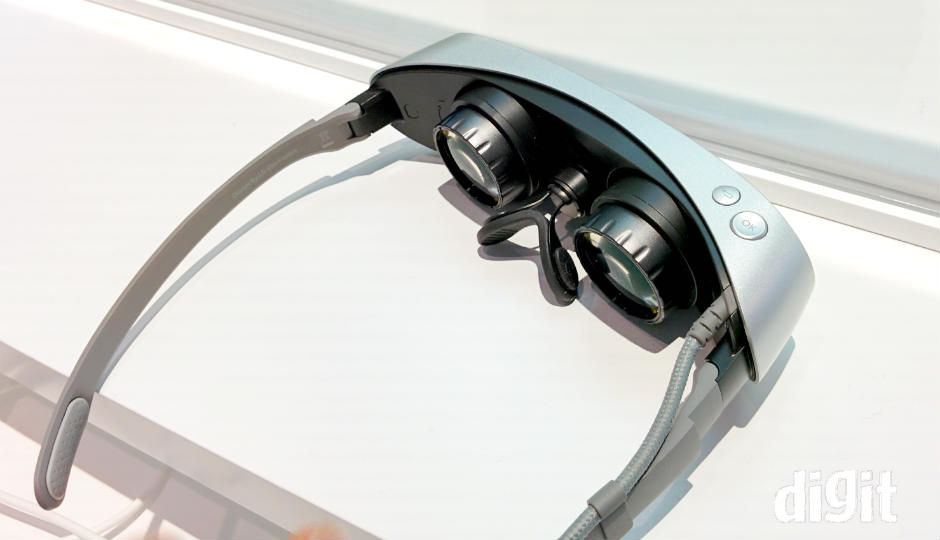 LG also announced a 360 VR which is a VR headset for the LG G5. It connects to the G5 via a dedicated cable and works exclusively with the phone. The headset has a foldable design that is designed to make it easy to carry. LG says that the 360 VR is about one-third as heavy as its competitors. The device is also compatible with 360-degree images and videos taken with the LG 360 CAM. 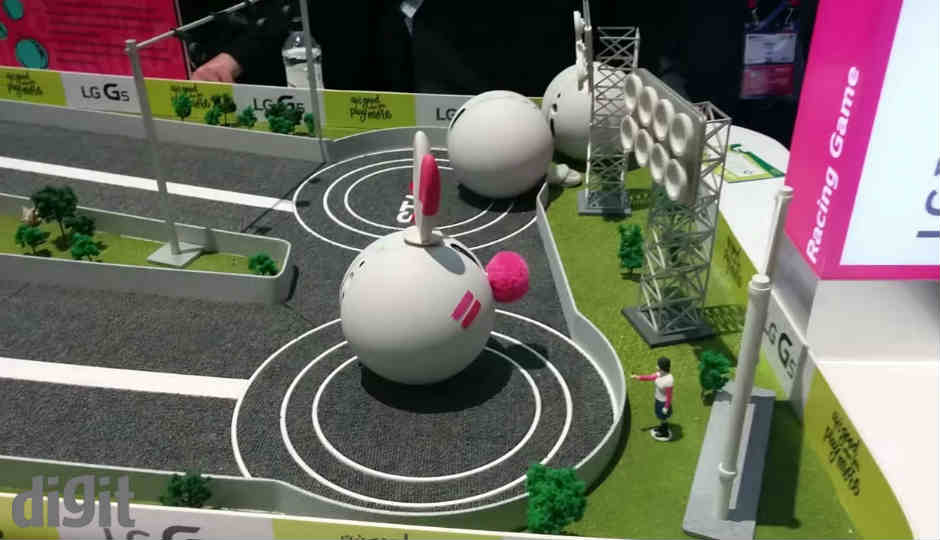 Another thing which LG launched was this Rolling bot. It comes with an 8MP camera and moves around by rolling like a ball. Users can monitor the interior of homes from anywhere via the internet. LG says that bot can be used as a security system and as as pet care companion.