Flagship Android tablets today are far and few but those that are available offer a fairly decent option for content consumption. Some of them even let you work on basic productivity apps like office apps and are even good for video calls. But don't expect them to replace your laptop. These laptops are good and get the job done to binge-watch your favourite TV shows and movies, stay in touch with friends and family and play some games. Think of these devices as your companion for content consumption on the go with good battery life. So if you are in the market to pick up an Android tablet, then here are some options to choose from. Note that we haven’t tested some of these tablets and they are here based on the features and specifications they bring to the table. This list is in no particular order. Although the prices of the products mentioned in the list given below have been updated as of 18th Apr 2021, the list itself may have changed since it was last published due to the launch of new products in the market since then. 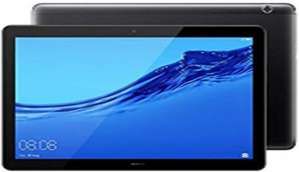 The Huawei MediaPad T5 brings with it a 10.1-inch FHD display and a 16:10 aspect ratio. It is available in a Wi-Fi only and a Wi-Fi + 4G option based on your need for connectivity on the go. The tablet also boasts of dual-speakers to give you a stereo experience when consuming content. The tablet may have 32GB built-in storage but a user can expand it up to an additional 256GB via a microSD card. It has a 5100mAh battery which the brand claims gives the device 11 hours of video playback. The tablet runs on Android 8.0 with Huawei Emotion UI 8.0. The tablet also has a Children’s Corner which comes with games, offers enhanced eye-comfort modes, posture guidance, blue light filter, limited using time and more.

The Panasonic Tab 8 HD has an 8-inch display giving it a compact form factor when compared to 10-inch tablets. The display has a 1280x800 pixel resolution and the tablet also comes with an 8MP rear camera along with a 5MP front camera. The tablet also has support for dual-nano SIM cards with both 4G capable slots. It has 32GB built-in storage expandable by an additional 256GB via a microSD card. The device also comes with a 5100mAh battery. It runs on Android 9 out of the box and also supports FM radio.

Another 10-inch tablet to consider is the Lenovo Tab M10. It is available in two configurations - 3GB RAM, 32-GB storage, octa-core processor and an FHD display and the other has an HD display accompanied by a quad-core processor, 2GB RAM and 32GB storage. Here we are going to talk about the former option sporting a FHD display. The tablet also comes with a 5MP rear camera and a 2MP front-facing camera. The tablet runs on Android and comes with a single SIM card slot. The tablet also features two front-facing speakers with Dolby Atmos support for you to enjoy your movies. It also has a 4850mAh battery which can give a claimed talk time of 8 hours.

The Huawei MediaPad M5 Lite brings with it a 1080p display along with 64GB of built-in storage that can be expanded via a microSD card to an additional 256GB. The tablet has four speakers tuned by Harman to add immersion to your content consumption experience. The tablet is also compatible with Huawei’s M-Pen lite Stylus for creative needs. The tablet comes with an 8MP front and an 8MP rear camera. A 7500mAh battery with quick charge powers the entire package. The tablet also brings with it an eye comfort mode.

The Lenovo Tab M8 second-gen comes in a Wi-Fi only or Wi-Fi + 4G option. It runs on Android and has an 8-inch HD display. Under the hood, the tablet has the MediaTek Helio A22 Quad Core and a 5000mAh battery powers the entire package. It has an 8MP rear camera and a 5MP front-facing camera. The display has a resolution of 1280 x 800 and the table also sports an ambient light sensor. It has a claimed battery life of up to 18 hours. The display has an IPS panel.

The Lenovo Yoga Smart Tab comes with a stand that can not only let you prop the tablet up on a table but also hang it if you like. It comes with a hinge that lets you keep the tablet at different angles. The tablet comes with 4GB RAM and 64-GB storage and in addition to Wi-Fi also supports 4G. It has a 10.1-inch FHD display and houses an 8MP rear camera and a 5MP front camera. It runs on Android and a 7000mAh battery powers the entire package. The tablet can also be used as a digital photo frame. It can also convert into a Google Smart Display, so you can stream music from various music apps or enjoy various videos. It has dual JBL speakers and also supports Dolby Atmos.