Webcams for PC have become commonplace over the course of these last two years. Everyone is using some sort of teleconferencing service these days, be it for attending seminars and conferences, group calls with your colleagues from work, online schooling or even consulting doctors for ailments. While smartphones might have decent cameras, they aren’t great platforms to learn or collaborate for work projects, so most folks prefer to have a webcam with their PC. And getting a decent webcam for PC with a mic that is crystal clear and a camera sensor that offers high resolution with good frame rates can make your concalls go much smoother. We’re looking at several web cameras in this list, starting from webcams for PCs under INR 1000 that offer passable video and picture quality, to high-end webcams which come with all the bells and whistles. Most of these webcams can be purchased online on popular e-commerce outlets or your local computer hardware store. Also, you should have no issues in getting any of these web cameras to work with popular video conferencing solutions such as Google Meet, Zoom, Microsoft Teams, Cisco WebEx, RingCentral, GotoMeeting and Skype. Although the prices of the products mentioned in the list given below have been updated as of 22nd Apr 2022, the list itself may have changed since it was last published due to the launch of new products in the market since then. 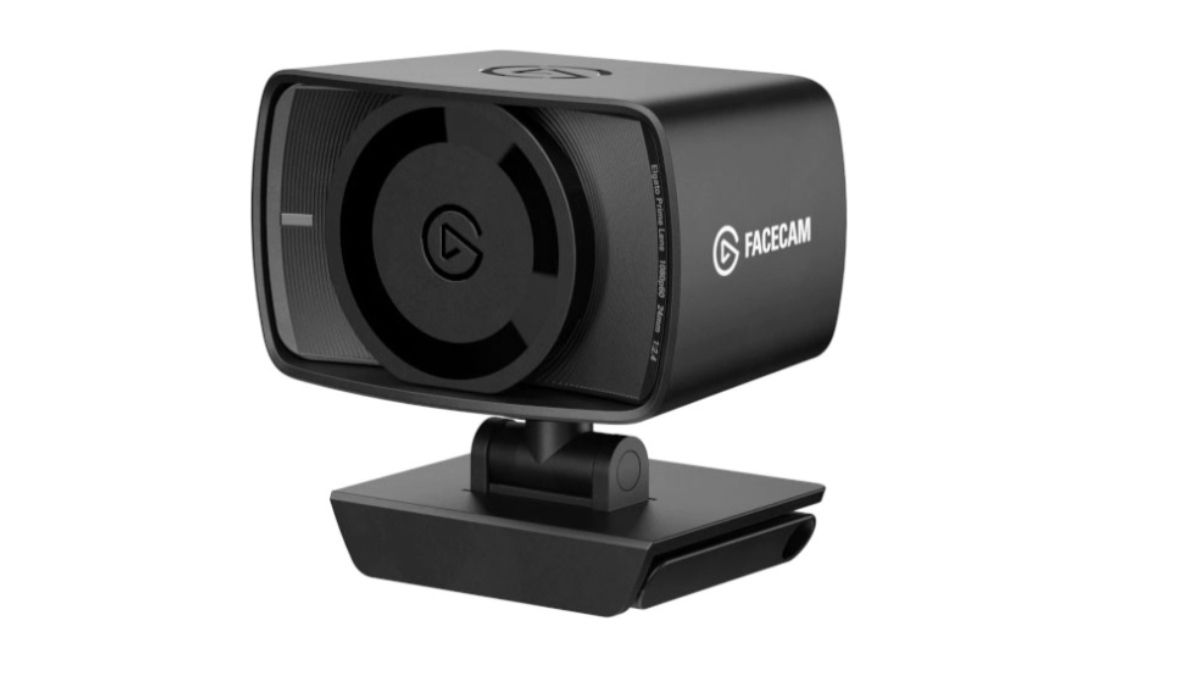 While Elgato is primarily known for making capture cards and streaming equipment, their latest product launch puts them ahead of every other web camera manufacturer out there. The Elgato Facecam is powered by Sony’s STARVIS back-illuminated CMOS sensor supported by an 8-element low-dispersion glass lens that gives it a wide aperture of f/2.4 , an 82 degree FOV and a focal length of 2.4 cm. The lens elements even have anti-glare coatings to prevent lens flares in case you have too many direct light sources. Most of the processing is done within the webcam so there’s minimal load on the PC that the camera is attached to. It uses a USB Type-C interface because the Facecam can output uncompressed YUV video for those who are conscious about video quality. The mounting clip is simple but you’ve got a ¼-inch tripod adapter underneath the main body just in case. The video output resolution can go up to 1080p at 60 FPS and you also get a privacy cap in the box. The Elgato Facecam is one of the most feature-rich webcams that you can buy for PC and macOS. The only missing aspect is that it can’t do 4K. The Facecam is ideal for video game streamers and for folks who want excellent video quality. 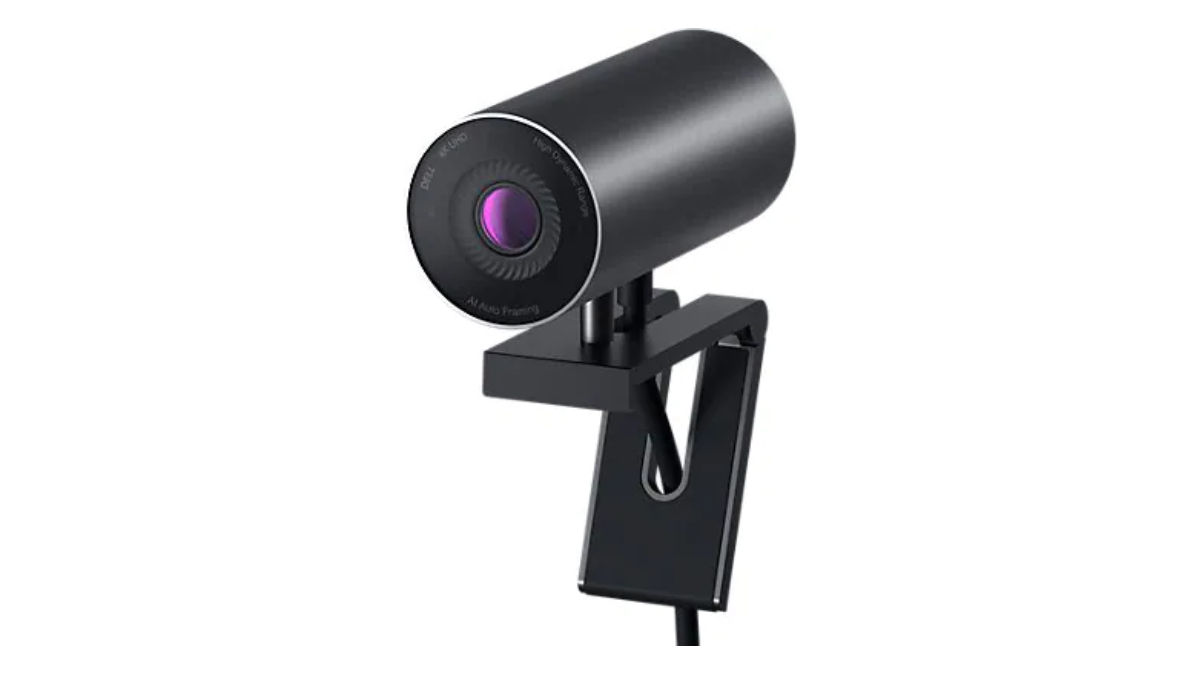 The Dell UltraSharp Webcam features the same Sony STARVIS back-illuminated CMOS sensor as the Elgato Facecam. It has a resolution of 8.3 megapixels and can output videos of up to 4K resolution running at 30 FPS. There is an AI-powered auto framing feature that works to keep the subject in focus at all times and you get the ability to switch the FOV between three presets - 65, 78 and 90 degrees. The mounting clip is simple and is also detachable. You can also mount the webcam onto a tripod for additional flexibility. There is no inbuilt microphone so you will have to use a discrete microphone or use a headset which has a microphone. You also get a privacy cap in the box. 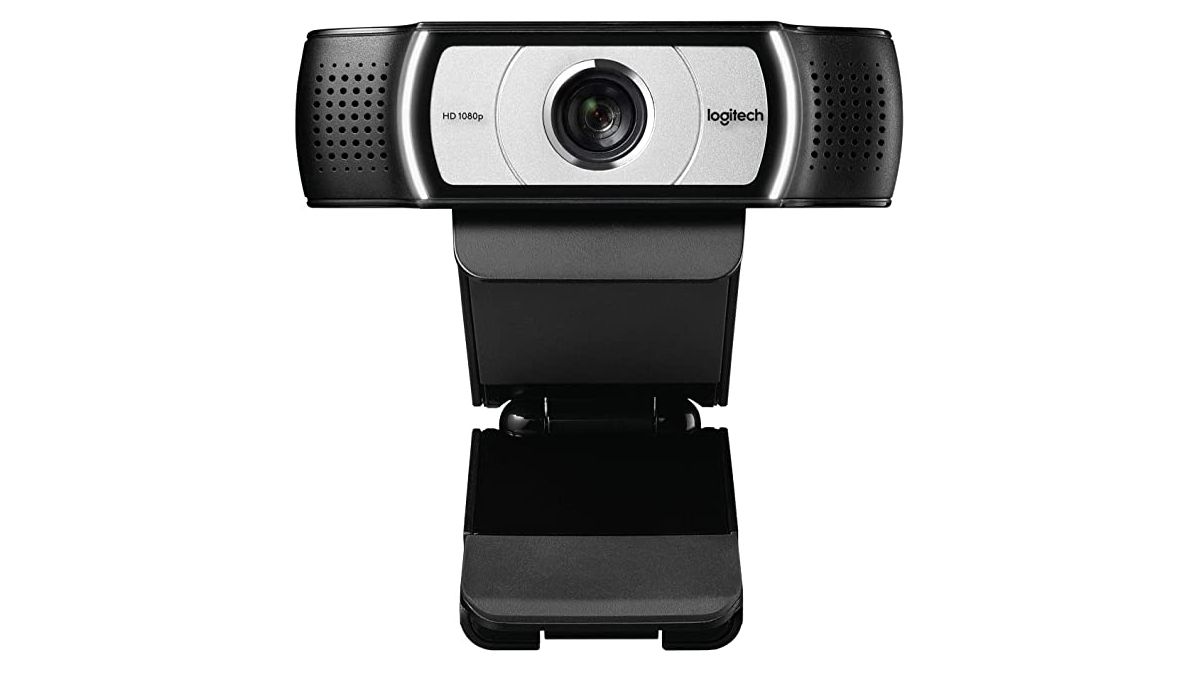 The Logitech C930e is a more business oriented high-end webcam for PC, Mac, Linux and Chromebooks. It costs four times as much as the Logitech C270 or even the Lenovo 300 but is miles ahead in terms of video quality and features. The C930e houses a 3 megapixel camera sensor which provides video feeds of up to 1080p resolution running at 30 FPS and has a 90 degree FOV (field of view). You even get a 4x zoom factor via the included software. Moreover, the front panel of the camera assembly is made of glass and not plastic, resulting in a much clearer video and picture output. It has a built-in stereo microphone set up consisting of two dual omni-directional mics on either side of the camera assembly. There are LED indicators on either side of the C930e much like the C920, except the lights are white in colour. You also get an attachable privacy cover with the camera which is easy to snap onto the front face. The cable is about 1.5 meters long and it uses a USB 2.0 interface. The mounting clip has multiple folding panels with rubberised surfaces that helps you securely mount the Logitech C930e onto a variety of objects. And if that isn’t enough, there’s even a ¼-inch tripod mount on the underside. The Logitech C930e is certified to work out of the box with a variety of popular teleconferencing applications. 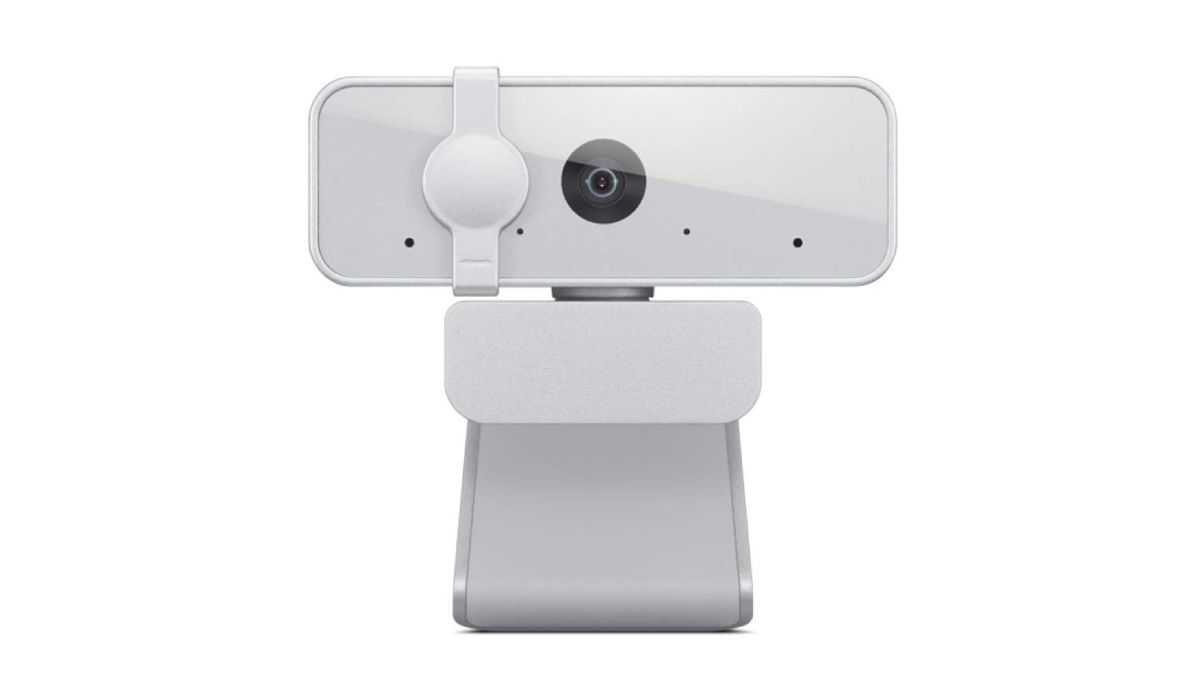 For a few hundred bucks extra, you can get the Lenovo 300 FHD Webcam which offers a lot more features than the Logitech C270. To start off, you get Full HD i.e. 1080p video resolution and the camera sports a larger 2 megapixel sensor. There is no physical dial to adjust the focal length and the field of video of the lens is a much wider 95 degrees. The camera lens also features a physical privacy shutter for the slightly privacy conscious people and you get two inbuilt mics for a slightly wider range to pick up sounds. The front side also comes with LED indicators that let you know if the camera is simply powered on (white LED) or if the video feed is currently active (green LED). The cable is also a bit longer at 1.8 meters so you can place the camera further away from the subject. Also, the main body can tilt up and down, and pan 360 degrees around. The Lenovo 300 FHD Webcam is ideal for situations where you have more than one person sharing the same camera since the wider FOV can easily accommodate 2-3 individuals and the dual inbuilt microphones can pick up audio coming from participants who might not be sitting directly in front of the web camera. 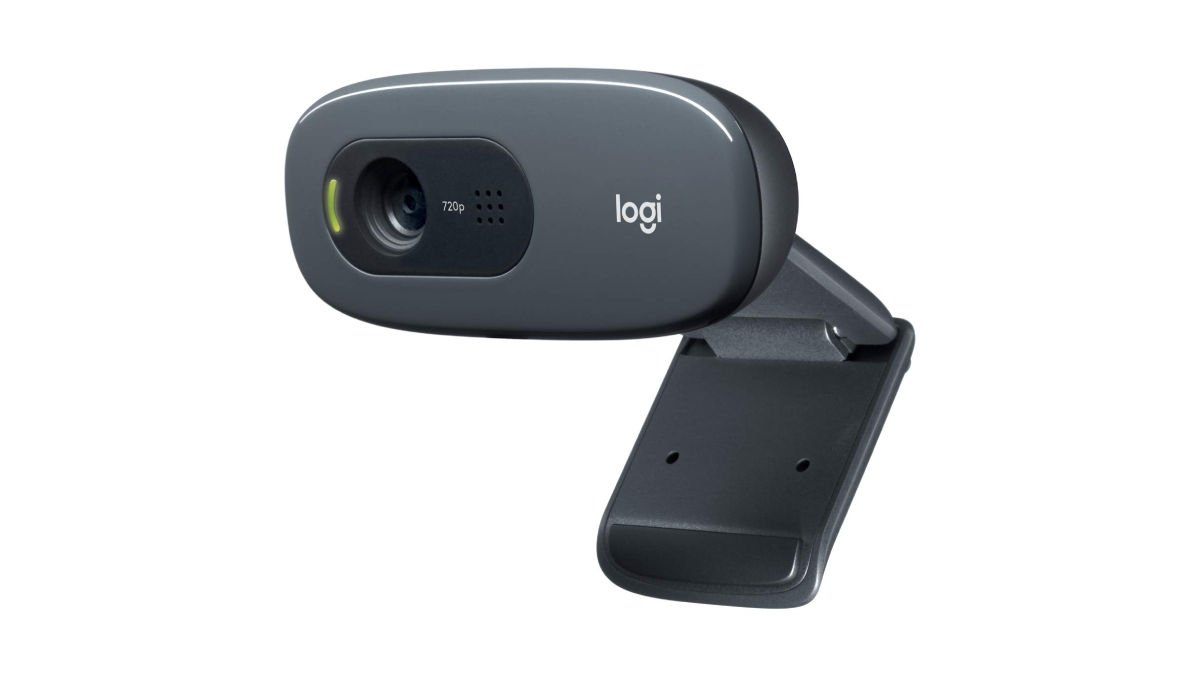 The Logitech C270 is a 720p / 30 FPS webcam for PC that offers decent picture quality and even comes with an inbuilt mic. There is only one microphone that is front facing and the camera lens does not have any adjustment dials for altering the focal length. The camera lens has a 60 degree field-of-view, which is quite narrow and the sensor has a resolution of 0.9 megapixels. So the Logitech C270 becomes ideal for folks who want a bit more privacy or don’t want a larger portion of their backgrounds to be seen by others. The C270 has a foldable clip like most webcams which makes it convenient to mount the web camera on top of your monitor or even your laptop screen. The main body only has the freedom to tilt up and down and does not pan or rotate. Since 720p video resolution is nothing to boast of, this is a webcam that you’d get if you don’t want to break the bank but do want something that will work without much fuss. The cable length for the Logitech C270 is about 1.5 meters long so you’ve got the flexibility of positioning the camera at a slight distance to get a better composition. 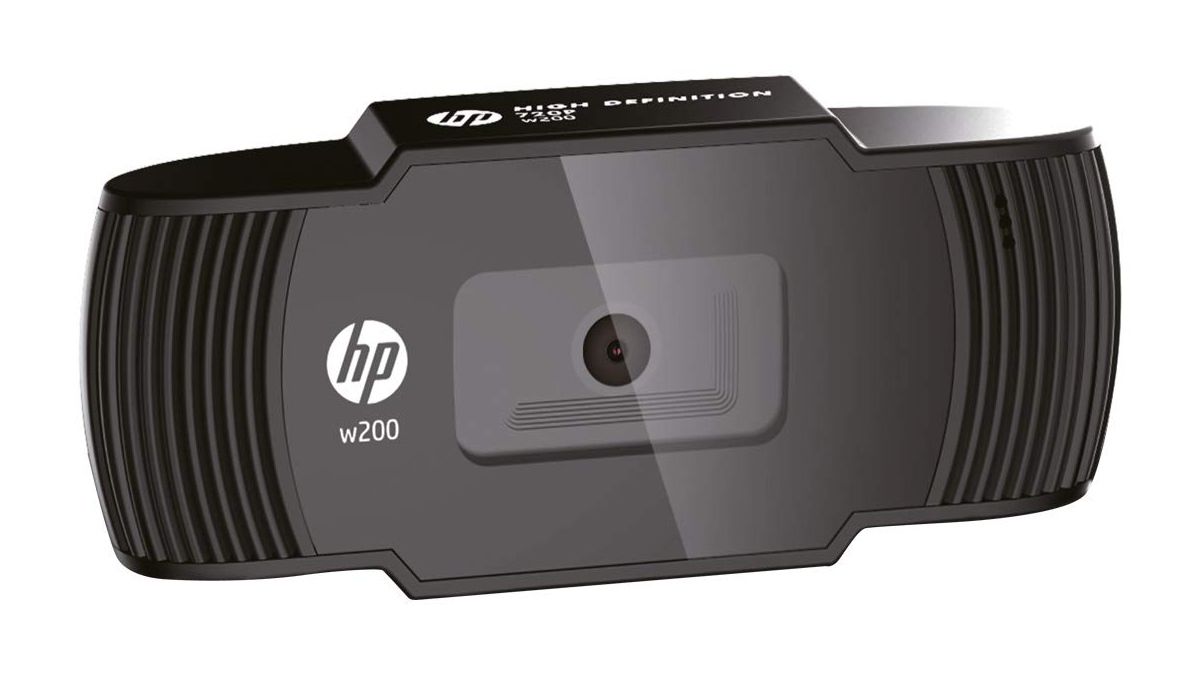 The HP w200 webcam is in line with the other economical webcams in this list. HP does not list out the resolution of the camera sensor on their website and the only metric that you can go by is the video resolution which goes up to a maximum of 720p at 30 FPS. The focal length of the camera is fixed like most other web cameras in this price range.. The camera lens has a FOV (Field of View) of 72 degrees which falls right between the Logitech C270 and the Lenovo C300 webcams. HP states that the w200 comes with dual microphones built into the unit. The main body of the webcam tilts up and down by 180 degrees and the mounting clip also opens up by 180 degrees. So the main body can tilt up to 270 degrees upwards. Speaking of the mounting clip, there is a ¼-inch tripod mount in the base of the mounting clip. 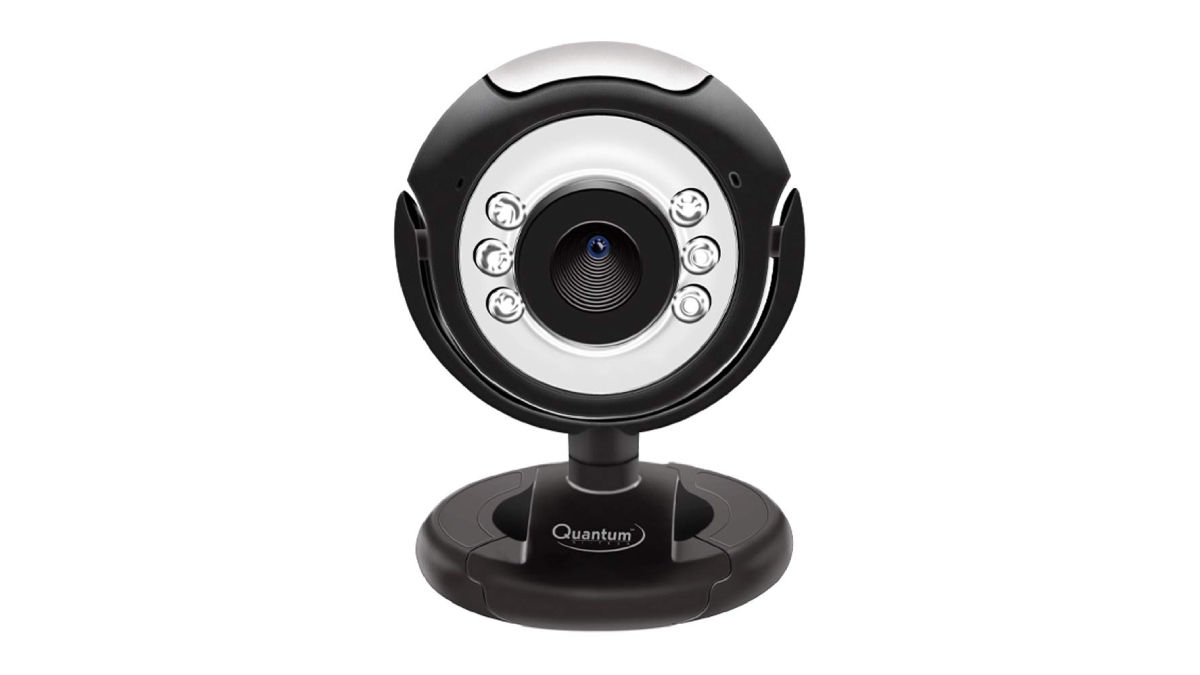 Another webcam for PCs that is priced under INR 1000 is the Quantum QHM495LM. It features a classic spherical design with a flat base. The base doubles up as a clip and you get to tilt and swivel the main body to point the camera in the desired direction. The minimum focus distance is 4 cm and the lens even features a focus ring for adjustment. There’s a button on the top or the QHM495LM to take snapshots or photos whenever needed and for low-light operation, there is an array of six LEDs around the camera lens. Speaking of which, the camera lens has a 58 degree FOV (Field of View) and there is also an inbuilt microphone. 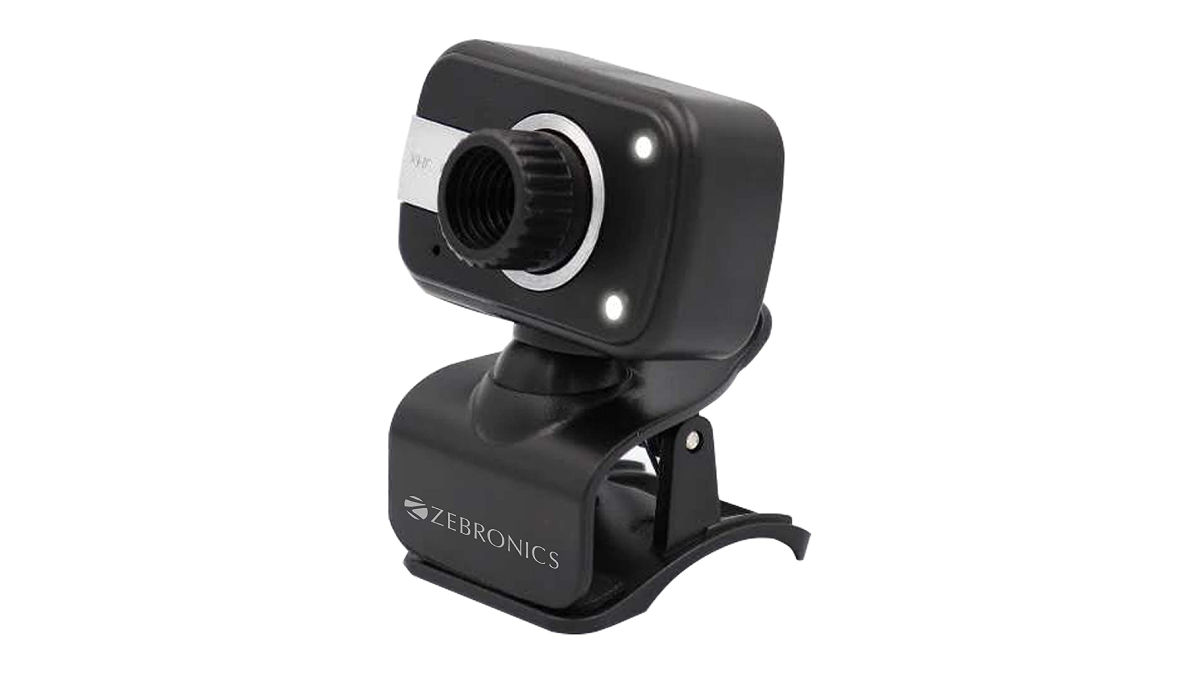 If you’re in the market to buy a webcam for your PC that is priced under Rs.1000 then the Zebronics Zeb-Crystal Clear webcam is a hard one to pass. The resolution of the camera sensor is not known, however, the video output has a resolution of 480p at 30 FPS. The camera is supported by a 3-element lens and there are multiple LEDs on the front face of the Zebronics Zeb-Crystal Clear webcam which can be switched on or off using a physical slide switch that is located on the back side of the webcam. The Zeb-Crystal Clear comes with an inbuilt mic. The cable is 1.3 meters long and the mounting clip uses a spring-loaded mechanism to provide added grip. The main body does swivel quite a bit and also tilts up and down a little. The field of view of the camera lens is unknown.