With the price of cooking gas on the rise, electric cookers are looking like a more practical purchase. In fact, an electric cooker that’s small-sized makes for an interesting option when travelling. They offer a convenient way to enjoy home-cooked meals without the need for a gas inlet. However, finding the right appliance can be tricky. Is a 1-litre electric cooker better than a 2-litre electric cooker? What’s the best small electric rice cooker? Hopefully, we’ll clear that up for you with this list of the best electric cookers for travel or home use. Do note that all these products can be used as steamers or rice cookers. These were selected based on features and specifications, along with taking user ratings into consideration. Although the prices of the products mentioned in the list given below have been updated as of 25th Apr 2022, the list itself may have changed since it was last published due to the launch of new products in the market since then. 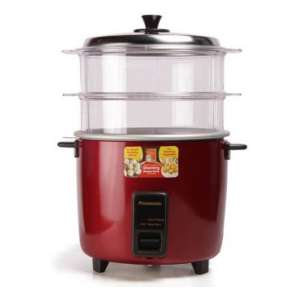 When you have a very large family, you need an equally large appliance to ensure that you make enough food for everyone. The Panasonic WA22H(SS) Food Steamer, Rice Cooker has a large capacity of 5L, which should be more than enough for any decently large family. It also comes with two separate sections, so you can cook two dishes at the same time!

Small size makes it fine for 1 to 2 people

If you are looking for something more compact, the Prestige Delight PRWO might just be what the doctor ordered. The cooker capacity should be enough for about two people. The cooker can be used to cook a number of dishes that range from Biryanis to Idlis. The detachable power cord design makes it easier to carry around when travelling.

A nice value for money offering

Looking for the best bang for your buck? Then check out this rice cooker from Flipkart’s own Smartbuy range. The design of this cooker is pretty straightforward, meaning that anyone should be able to use it without any issue. Like other appliances on this list, it will not only cook food but can also be used to keep the food warm till it’s time to eat.

A high-tech option that can do a lot!

The Nutri Pot Electric Pressure Cooker from WONDERCHEF offers a host of features that should keep everyone happy. This high-tech 7-in-1 electric cooker offers 18 pre-set functions. Most of the recipes are suited for Indian preferences and as such, covers both vegetarian and non-vegetarian meals.

Rice is a staple in Indian cuisine and it makes sense that users may want to buy an electric cooker that specialises in cooking rice. This electric rice cooker from KENT will not only allow users to quickly whip up delicious rice, but also a separate dish thanks to a separate inner pot and an upper steaming tray. It also comes with a delay cooking option.

As the name would suggest, slow cooking is a process of slowly cooking a dish over time, which in turn, is said to bring out more of the flavour. Meat-lovers will also like the fact that it tenderizes the meat really well. The RUSSELL HOBBS RU-23200 Slow Cooker has a capacity of 3.5L, which should be enough for a small family. It has three settings, namely high, low and warm. The device is dishwasher safe and easy to clean.

The Panasonic SR-W18GH CMB Food Steamer, Rice Cooker offers a capacity of 4.4L which makes it ideal for most large families. However, what sets it apart from the rest is that it comes with moulds for both mini and regular idlis, which is a staple of South India. However, the appliance isn’t just about idlis and it can also be used to make biryani and fried rice.

The Nova NRC-974TC Travel Cooker is a compact electric cooker designed for travellers with features like an internally stored power cord. Its capacity of 1.3-litres should be enough for most solo travellers and might also be sufficient for two. It can be used to cook stews, soups, noodles and rice!

List Of Best Electric Cookers For Travel Or Home (Aug 2022)