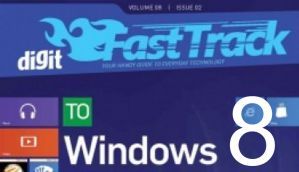 Windows 8 can be a confusing release for consumers even before they have used it at all. Should you hate it, or should you like it? “Love it to bits” and “hate with a passion” are both valid opinions, but there seems to be no conclusion for Windows 8. Hopefully this FastTrack will give you some muchneeded closure. Windows 8 took some time to develop its reputation. Microsoft announced change after change for their upcoming OS, and people were mostly fine, happy even. Even the confirmation that Explorer would use the ribbon only slightly dampened the joy. But one cold, damp morning Microsoft finally announced to a media rife with trepidation, that the Start Menu had passed away. A collective “oh you didn’t” resounded through the masses and things just got real. Microsoft had gone too far, the line must be drawn here, people said, this far and no further.

Windows has had a long and confusing history filled with inconsistent dates, names and version numbers, and recent Windows releases haven’t improved the situation much. There are a few key milestones in the history of Windows, and here we are speaking at an architectural level, not legal or financial.

Getting started from scratch

While we might differ in our opinion on whether the roads in our country are good enough for a Ferrari, no matter how powerful the car, it needs the right road to run. The situation is very analogous to computing where the hardware would be the road and software, the car. If you have a great OS and the hardware doesn’t support it, the OS is a waste. The performance and smoothness of any application depends on the hardware and it’s more so sfor the operating system. If the OS doesn’t run well, you can be sure that no application will either. Naturally, hardware requirements and compatibility issues for an OS carry much more weight than they do for any app. Windows 8 has a higher set of hardware requirements compared to Windows 7. Don’t worry though; they’ve not been increased much.

Get to know the new UI

Let us begin with the name that was: Metro. Why isn’t it Metro anymore ? And what is it now? Such are the questions that keep us awake at night, because we don’t always know how to answer them. So let’s start with the simpler answers, why has the Metro name suddenly disappeared.

Usability and getting work done

One of the most flamboyant features of Windows 8 is its new start screen. Windows, as we’ve known it since the past 15 years, has undergone radical change and the desktop is no more the same. Mobiles have invaded our computing experience and Windows 8 duly refletcs that trend.

Like all other operating systems, Windows 8 has its army of fanboys. While those standing on the anti-Microsoft podium may chastise Windows for not being secure enough, a look under the hood suggests that Windows has multiple defenses against hacking. Windows 8 erects new walls to keep out cyber criminals. In this chapter, we’ll show you glimpses of the Windows 8 security system (truly, there’s no way we’d be able to explain all its marvels in a small booklet).

Windows is not simply the world’s most used desktop OS because consumers buy it; it’s also a favourite with businesses ranging from small enterprises to corporate behemoths using it in their offices. And why shouldn’t it be – Microsoft has long featured a great deal of functionality for office use. With Windows 8, new features have come in and the old ones are more advanced. While an average user would only imagine that the business use is limited to things such as a shared printer, shared network connection and remote desktop, there’s a whole lot more required of an enterprise office PC.

Like with every previous version of Windows, the out-of-the-box experience of Windows 8 can be greatly enhanced if you know your way around the system. There are a number of hidden, unintuitive or poorly explained features in all versions of Windows and if you are willing to take a few risks, make a few changes under the hood, and perhaps take advantage of some third-party tools, you can get your Windows experience a lot closer in line with what you want.