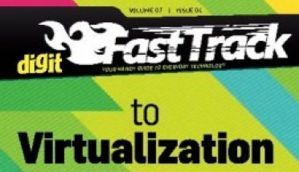 What you’re reading is printed on paper, but was originally written on a computer inside a word processor. So what’s real? The paper in your hands or the original document in which it was created? Absurd question, yes but then there are questions which when pondered over can bend the perceptions of reality. Leaving philosophies where they belong, the point we’re trying to make here is that virtualization is a similar concept and definitely something you want to try your hands at, if you’ve not already. Once you get a hang of it, you’ll keep returning to it. How can we be so sure, you ask?

Virtualization or Virtual Machines are a way of emulating hardware in software. If that sentence was a little tricky to understand, try this – using virtualization you can run an operating system on top of another. If you’ve not used any virtualization software yet, you’re definitely missing out on something. Virtualization is achieved with the help of software. This software is a program which allows you to install a new operating system while not utilising the available hardware directly. We’re sure this might still sound a little messy if you’re completely new to virtualization. Wait till we show you the methods and how it’s done!

Virtualization in the real world

Virtualization as we said is the art of making an operating system run atop another. It’s especially beneficial for use on servers depending on who you are. If you’re just a regular user, you’d give two hoots about it. On the other hand, if you’re a developer or someone who deals with IT technologies, you would know the importance more than the general crowd.

Virtualization software – FEATURES to look for

Good software is often defined by its capabilities, its ease of use and stability. Virtualization software is no exception. Uses differ for the software from user to user. While one may use Windows only for gaming and another only for running MS Word, there may be someone who wants to do both of them and a little bit of systems and web programming, some animation, a little server stuff and more. Lists are endless for the demands and there are software for which its manufacturers cry out loud “my product can do everything”. Well, while having a lot is never bad if you need it all, it can certainly be bad if it turns out to be like the birthday gift you never wanted. You’ll probably lose your mind trying to figure out what to do with it and go mental in the process. That’s what extra features can do. They can cause instability, bloat your memory and slow down your system while running. We’ll tell you the different features general virtualization software would / should have and the uses of those features.

Virtualization has become one of the most mature and active topics for discussion and lots of software has been created for its implementation. There are companies which specialise in the arena and put up a really good fight against competition, and then there are the open source counterparts making virtualization available to the common man without shooting holes in their pockets. While some projects (both, open and closed source) are quite big and have a lot of features, there are a few smaller ones with not so big a name and without too many features. While using them would give you an experience of virtualization, using the better ones would give (obviously) better features and better experience. The experience of virtualization depends on the features and flexibility of the virtualization software. For the same reason, we pick up the best of the trade and tell you how to go around, the features they can provide and the troubles they can bring to you.

VirtualBox was a new kid on the block a few years ago and didn’t have too many features. No more; the kid is growing and has gained attention. VirtualBox, as of now, is one of the most popular desktop virtualization solutions. One of the biggest reasons behind this has been the names associated with it. VirtualBox was developed by a relatively small company (compared to its current owner) named Innotek. The company was later acquired by Sun Microsystems which in turn was bought by Oracle. Since the acquisition of Innotek by Sun, VirtualBox gained a lot of speed in development as well as acceptance by users. Its popularity only increased when Sun was acquired by Oracle. VirtualBox is a free product and there’s no need to pay anything to anyone. It’s licensed under GPL which means that you can have a look at the source code as well! This is one of the reasons for VirtualBox rising towards the top of the list in virtualization. Another asset by its side was being cross platform.

For a Linux user, the command line is one essential part of life. If you use Linux, chances are you’ll find yourself using a command terminal quite often. There’s no escape when you have great features.

Utilizing your desktop for more

By now, you must be impressed with virtualization and its ability to help you do so much. If you’re not using it or aren’t convinced about using it yet, this chapter is an attempt to lure you. If you’re using it, here are a few good things you can do with virtualization. You’ll slowly discover so much more to do with virtual machines than we’re about to tell you about. Though it would surely depend on what you’re interested in doing with a virtual machine, here are a few good tips for you make virtual machines more useful and scenarios in which they can help!

Virtual machines are not the solution to everything