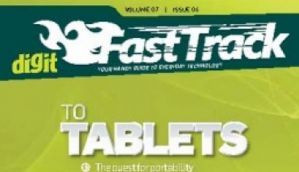 Tablets need no introduction. If you’re into tech, you’ve no doubt been bombarded with ads for tablets. The world’s gone portability crazy – what started as simple browsing on your dumb-phone has now transmogrified into an app crazy, bandwidth hungry, touch-enabled world of its own. What the iPhone started, has moved on to become the touchy-feely world of people going gaga over tablets. However, most people still believe that the iPad was the first “tablet”, and that the tooth fairy leaves money under your pillow as a reward for spitting out milk teeth... We’re here to debunk one of these beliefs, and set you straight with knowledge that you should pass on.

The quest for portability

Computers, when they started out, were huge monsters that occupied entire rooms and consumed massive amounts of power. Debugging an error required you to be a skilled engineer, and access to computers was restricted to very few. The invention of transistors, specifically CMOS technology changed all of that and heralded a pace of innovation never seen before. As mainframes evolved into desktop PCs, their usage grew, and soon the need for portable computers arose.

Apple and the touch interface

Now, no one is calling Apple the inventors of the touch screen, but if you glance over their patent for this technology closely, it would appear that they almost own all rights to its applications and use in devices. With US patent number 7966578 (http://goo. gl/2hh8V), Apple has been awarded control over “[a] computer-implemented method, for use in conjunction with a portable multifunction device with a touch screen display, [that] comprises displaying a portion of page content, including a frame displaying a portion of frame content and also including other content of the page, on the touch screen display”.

The emergence of google android

The most direct rival to Apple’s iOS software is the ubiquitous Android platform, backed by Google and adopted by several prominent device manufacturers over the world. Android gained favour as a viable alternative to iOS and quickly established itself as the quickest growing and most widely used smartphone platform. Its popularity can be credited to its openness, which ensured a developer friendly environment and a vibrant app-ecosystem, and enabled handset manufacturers to port Android onto a wide range of devices resulting in a large user base. Consumers were now presented with a plethora of options in terms of form factors, screen sizes and hardware features while developers had unprecedented control over their apps and a large target audience to monetize their work.

Never count Microsoft out of the game: Microsoft isn’t extinct yet! Though, in statistics after statistics, you rarely see Microsoft included, in the mobile OS market. Simply, they are not doing well and not firing in all cylinders. Alas, we all tend to forget that Microsoft owns Windows and is the king of office tools, with Office. Apple and Google have proven to be far nimbler in the past decade, out-manoeuvring and out-innovating the competitors. Apple and Google already have a large foothold in this space.

With the explosion of tablets as a “hot” category, manufacturers are literally crawling out of the woodwork, and that means there are a lot of choices for you. In this chapter we’ll look at some of the well known tablets. Some of the lesser known ones have been covered in this month’s issue of Digit.

Is a Tablet right for you?

We know suddenly today, it’s become difficult to try and imagine how things were just a few years ago, and remember a time without tablets. You would realize within just three years after the original Apple iPad came into stores, a slew of tablets started entering the markets from all fronts and a multibillion dollar tablet market was created. Ever since then, we’ve been seeing numerous manufacturers trying to get a piece of the pie with continuous advancements and upgradations. Apple itself has come out with its third version of the iPad already. It still dominated the market and sold around 3 million units in three days when it was launched last month.

As we have seen already, tablets are making waves in the current market, and everyone wants to have one. But what’s the reason people buy tablets? Most people would answer ‘apps’ without the blink of an eye. In terms of hardware, tablet PCs are not actually a revolutionising product. Acer and Microsoft had jointly produced a tablet years ago, but the key to Apple’s success is that they created a commercial synergy between hardware, software and service. Thus, using the apps available on the App store, the iPad could become a computer, a navigator or a gaming console among many things. You could say that a tablet without good apps is just as good (or dull) as perhaps, cricket without replay.

The future of Tablets

Apple has set the form factor that will be probably be with tablets for a long time to come. The brilliant thing about its design is that the iPad doesn’t really have a design. The current big-slabof- glass is a really good example of an unobstructive design. It is where the device takes a backseat and you have this slab of glass that becomes a platform for you to do different things using apps. This slab becomes what you need it to. So, this form factor is here to stay for some time.

Now that you know all you need to about tablets, we’re going to assume you’ve rushed out and bought yourself one – in about the same time it took you to flip from the last page of the previous chapter to this one!