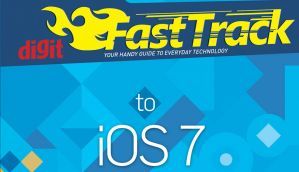 Mobile operating systems were previously something that no one paid much heed to. They existed, they did what you wanted and you didn’t care too much as long as your desires were fulfilled. These last few years have changed all of that. Our needs, our style of working – they’ve all changed and almost exclusively revolve around our mobile devices. The mobile OS is now our primary gateway to the world we want to experience and it has to evolve to support our needs. With the introduction of the iPhone, Apple was successful in effecting a shift in the way phones were used.

The road to iOS7

The history of Operating Systems is quite an extensive topic and as with any contentious topic there’s much scope for debate. Apple with its Apple Series of computers was one of the first few tech companies to bring the concept of a GUI out in the open, and in many ways redefined how a user could interact with a computing machine.

If you don’t own a fairly recent apple device, you won’t be able to enjoy the new redesigned iOS 7 on it. In this chapter, we will discuss the details of supported devices, upgrading and features that you may not be able to use with certain devices. One of the main reasons why the iOS 7 upgrade is restricted to a select set of Apple devices is because it has a rich graphics intensive design that takes away processing power. Devices that support iOS 7:

“Awesome” is the word we’re hearing the latest iOS 7 being most associated with. Well there’s also “pretty”, “silly” and “meh” but we’ll those aside for now. iOS 7 is of course is the most major iOS update yet and it seems to have attracted a lot of onlookers. Some iOS users were skeptical of the new changes, but most Apple fans took a leap of faith and installed the brand new OS almost immediately. For pessimists – use it for three days and in all likelihood you will fall in love with your Apple device all over again. The update manages to bring all the old and new features together in a simple yet beautiful manner. When you’re using your iDevice, it feels new, and yet you know how to go about doing most things. We know Apple likes to keep things minimalist, so what you’re looking for is probably just a swipe away.

Don’t panic. Whether it’s the apprehension of getting used to a new interface or the excitement of learning the new features, this chapter will be your guide. We’ll look at how you can accomplish most of the everyday tasks within the iOS 7 interface and get the hang of the default apps that are already included.

The iPhone maybe an iconic phone, but the new icons are a far cry from what they once were. Now we know that Johnny Ive believes in simplicity, but some of the icons are so childishly simple and plain that they seem to detract from the design more than anything else. This is of course a matter of debate, some people do love the icons, but the majority don’t. The Safari icon in particular is the worst offender. Third-party developers have done a far better job of creating icons that are compatible with iOS7’s design without being childishly plain like some of the default icons. The excessively plain styling extends beyond the icons too.

In this chapter we will look at the newly revamped iOS 7, and cover how to use the newest features, and also tell you how you can make the most of the OS with hidden tips and tricks that range from the easy, everyday type to hidden, advanced secrets.

Apple’s latest mobile Operating System, iOS 7, was welcomed amidst a great deal of hype, chiefly due to a radical design change. Gone were the skeuomorphic interfaces, the drop shadows and the sharp gradients – they were replaced by a much flatter, cleaner and minimalistic design paradigm, taking subtle cues from its predecessors, Windows Phone’s Metro style and Android’s Holo theme. As is the case with any change, these design changes were met with strong, highly polarised reactions. While some lauded the first significant design change in iOS since its inception, most others were quick to point out several defects and inconsistencies. The brunt of the blame for poor design was borne by the app icons on the home screen, for most new icons failed to effectively communicate the app’s purpose. Poor choice colours, poor use of metaphor and inconsistencies in the design language left many designers and Apple enthusiasts confused – after all, this was a company known for its fastidious attention to detail!

We already know that iOS 7 is a complete overhaul of iOS with major changes in User Interface Design, Sprite Kit for 2D games and a whole lot of other interesting changes and improvements. Thus, there is scope for app developers to use the new features of iOS 7 to their advantage and upgrade their apps. iOS 7 also supports OpenGL ES 3, and add to that advanced multi-tasking, improved Game Center , external game controller and a new Sprite Kit, and it’s obvious that iOS 7 is loved by Game Developers.