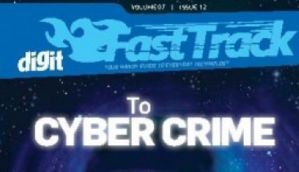 Imagine a bespectacled shadowy figure sitting somewhere at an undisclosed location. Ordinarily, going by his attire or personality this person could be just your average Joe, but in this context he could be considered a suspicious and dangerous figure because of the context of what he is doing. He could be a cyber-stalker, a notorious hacker, or someone who is currently engaged in a coordinated cyber terrorism attack. Or perhaps (a comparatively lesser evil) he could be simply a mass mailer. In the course of performing all of these actives, he is for all practical purposes a cyber criminal.

What is Cyber Crime?

Crime is that dark side of society that’s too omnipresent to be overlooked. It’s a bane to the harmony of society but it’s hard to argue with the fact that humans, in general, tend to invest in activities where the returns are much higher than the effort needed to be put in and the risk of loss is much lower. The skill and expertise of a pickpocket or shoplifter is of no debate, and when a particular skillset enables someone to make a profit out of it, he is inclined to tap that resource no matter how morally dubious be the act. Over time, criminals have had to adapt new techniques and arm themselves with better equipment to keep up with ever changing technology.

The 12 types of Cyber Crime

In order to protect yourself you need to know about the different ways in which your computer can be compromised and your privacy infringed. In this section, we discuss a few common tools and techniques employed by the cyber criminals. This isn’t an exhaustive list by any means, but will give you a comprehensive idea of the loopholes in networks and security systems, which can be exploited by attackers, and also their possible motives for doing so.

How to tell if you’re a victim of Cyber Crime

In the previous chapter, you were introduced to some of the most important weapons used by cybercriminals to bring their imaginations to reality. Now, you’ll learn how to detect whether you’re a victim of (or on the verge of being a victim of) cyber crime by watching out for suspicious activity. Let’s look at the most common types of cyber crime attacks.

If your mixer-grinder refused to start one day despite your best efforts, and knowing that you haven’t fiddled around with any critical piece of the machinery, would you keep trying to start it, or approach an electrician? What would you do when he tells you that you’ve been sold a defective piece? Wouldn’t your first thought be to take the device back to the outlet where you bought it from, and demand a replacement or a refund?

Complaining about the country’s situation on Facebook and saying that XYZ politician in corrupt on Twitter is one thing. Being interrogated by police is totally another. Though both the things might not seem connected to each other, the fact is, they are. One of the points we hardly realize or take into account when posting content online are the laws. The most widespread idea is: “I have freedom of speech granted by the laws in the constitution”. Another thought can come to mind in tandem with the first is: “Who is watching me anyway?” There are many other similar arguments that follow which help us convince that no matter what we do online we can just get away with it! Nothing can be far from the truth.

Every religion in the world has taught us since centuries to treat our fellow humans, even enemies, with love, for love transforms. But how do you treat someone with love when he intimidates and hurts you, drive your world into chaos and you don’t even know who he is. How would you protect yourself from someone whom you don’t know and can’t see? Quoting Ra’s al Ghul from the movie Batman Begins: “Men fear most what they cannot see.” Welcome to the world of faceless terrorism.

Before we go further, here is what Wikipedia says about cyber warfare: “Cyberwarfare refers to politically motivated hacking to conduct sabotage and espionage. It is a form of information warfare sometimes seen as analogous to conventional warfare although this analogy is controversial for both its accuracy and its political motivation.” Cyber warfare might not be the biggest news as of now, but there has been speculation, based on reported incidents, that it has been performed in the past and that it will only grow in days to come.

Stay safe on the internet

Let’s admit it. Our lives revolve around the internet – paying utility bills, booking movie tickets, shopping for anything and everything, getting married, finding love and even, making a social impact. But with cyber crimes like phishing and data theft on the rise, it pays to be safe than sorry.