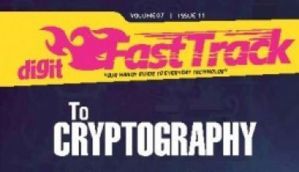 Everyone has secrets. And as ironic as it sounds, what good is a secret if you can’t share it with someone? But the operative word here is someone, and only that someone. How do you do that? You devise a secret language or code that can only be understood by those in the know. Even as kids, we all developed our own little “code words” as ways to outsmart adults, or even other kids, and create some sort of perceived privacy from prying ears. Cryptography is this very science of secret communication. The science dates back to the very dawn of civilisation, and over the years has had a significant part to play in everything from war, literature, culture, technology and to even crime. For years cryptography had an aura around it of being an occult practice, understood and used by a select few - shadowy characters who operated in secret and did things you’d be better off not knowing.

EPFT UIJT MPPL MJLF OPOTFOTF UP ZPV? Does this look like nonsense to you? Did you notice that we asked you the same question twice? Confused? Look at the set of random alphabets in that first “sentence”. Replace each letter with the letter which comes before it in the alphabet e.g. replace B with A, P with O, F with E and so on and reread the sentence. It’s easy but in case you’re slow (which we doubt considering you’re a Digit reader), let us help. That would translate to: “DOES THIS LOOK LIKE NONSENSE TO YOU?”. Now read the third sentence and the confusion should go away. You see, cryptography is simple! All it takes is a trick up your sleeve and the patience to decode or encrypt a message.

The year 2003. The world woke up with a new perspective on history, a revelation that would shock many and create avid interest in the art of secret communication. Dan Brown’s Da Vinci Code created a furore among critics and readers alike. While the former chose to point out the literary inconsistencies, the latter rushed to read up more on the hidden layers of Da Vinci’s art – in other words, their first ever tryst with cryptography. However, this science of secret communication has been as old as mankind itself. Well, almost.

If u havcme dis far rdng dis buk, vblveuwudfind dis txtprtyez 2 read. So was that really that tough to understand? We hope not. After all, we do it everyday – saving characters in our text messages on mobile phones and during chat to type faster. But it’s not a new concept. The current generation can’t take credit for this invention; it’s not our invention. Our forefathers used it in telegrams. Back when sending telegrams was charged per character, they’d try to squeeze up characters to form another word which could easily be related to the word that it was meant to replace – much the same way we abbreviate text messages today.

The crux of what you’ve learned so far is that cryptography is the art of writing or storing information in such a way that it’s revealed only to those who need to see it and hides it from all others. Long before the information age, cryptography was used only to ensure secrecy of information. Encryption was used to ensure confidentiality in communications by spies, military leaders and diplomats. The Egyptian hieroglyphs, the scytale transposition cipher used by the Spartans of Greece, waxed seals and different physical devices to assist with ciphers were used throughout history right up to modern times. These devices underwent further changes when computers and electronics came into the picture, immensely helping in cryptanalysis.

The lore of unbreakable ciphers

With such an obsession around solving puzzles, it’s obvious that unsolved puzzles are by far the most popular, or the ones that capture our imagination. Over the years, there have been many such unsolved puzzles which have caught the imagination of the masses. The notion of invincibility of a cipher has led millions to try their hands at solving them. Despite tremendous advances in the science of ciphers, and using high-end and complex decryption techniques, there are several ciphers still waiting to be translated. In the modern world, where information is power, the field of data encryption has acquired a mighty status. Here we look at some of the famous unbreakable ciphers that have taunted us for years.

Diy: make your own ciphers

OK, enough theory, let’s get down to actually doing something now. In this chapter, we’ll guide you through the rather interesting journey of creating your own cipher. The first question that crops up is “What cipher should Classical ciphers are the best examples, and are the easiest ones as well. The problem with them is that they work on the level of ‘letters’. Classical ciphers don’t let you go below that level. In our daily life, we deal with a lot of data that’s not just a collection of letters. For example, there’s no easy way to convert an image or a video to letters. Of course, the word ‘letter’ is being used loosely here. Another question could be “Letters in which language?” Modern encoding techniques can represent letters from quite a long list of languages using clever techniques to organize bits. This leaves us with one option – abandon classical ciphers because classical ciphers cannot be used to encrypt data well enough in a digital world.

The future of ciphers

When one day, a man sits down to analyze everything that computers have affected (and by default, improved) in the existence of the human race, that man would be doomed - that work would never get done completely. We’re saving ourselves and you a lot of time by not going into the details of the issue, but lets just say that computers are awesome, and leave it at that. So, ciphers. To give you an idea of what was ‘groundbreaking’ in ancient times, try cracking this.