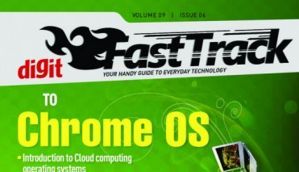 Traditional operating systems, be it Windows, Mac or Linuxbased, have held us tied down to a few out-dated assumptions for computers. We’ve embraced them as a given and continued to adopt upgrade after upgrade without much thought. But now we’ve reached a point where Google, unlike legacy OS creators Microsoft and Apple, is changing the way we perceive operating systems. Now is the dawn of the cloud based operating system and Chrome OS is its most prominent emissary. But despite Chrome OS’s growing popularity across a variety of industries, it is misunderstood. Isn’t Chrome OS just a browser masquerading as an operating system? Is it all hype? How can you really use it? Well, these questions are just the start of this month’s issue of FastTrack.

Back in the day, the average organization would be required to purchase a whole bunch of computers, associated softwares. With time the software would go out of date because of which the head of IT would be left with two problems in his hands. The first being that he now needs to update the software on every single computer (while remembering to factor in the fact that new employees will be joining the organization) and the second being the fact that chances are, the old computers might not have the necessary specs to run the new softwares, meaning another upgrade.

It took Google only a few years to become a household name. From web searches to email, their synonymity with the online world grew exponentially with numerous innovations and acquisitions. And even as the world holds its breath in anticipation for the famed Google Glass product, the engineers over at the Googleplex are more giddy than ever about Chrome OS. Why is that?

Chrome os vs. others vs. chromium os

Chrome OS has been known to confuse and confound a variety of people - from naysayers who believe it’s the biggest mistake made by Google to evangelists who can’t seem to get over its functionality. In reality, the Chrome OS is a hybrid product that works more like an appliance like a smartphone rather than a traditional computer. In its purest form within a Chromebook, it benefits from customised hardware/firmware that makes it perform at a much better level when compared to other netbooks/laptops of similar design. But it comes with its own baggage of restrictions that make users of traditional operating systems scratch their heads wondering if it’s a computer at all. The one thing that needs to be cleared up outright is that Chrome OS isn’t an internet browser machine made exclusively for the internet. In fact, tts something more subtle and fascinating.

Are you a chrome person?

The last couple of months have seen a fair amount of movement on the alternative OS front, for the want of simplicity and ease of use. Google pushed Android, as is, on certain AIOs recently and HP was leading that march. But, a much more refined alternative to Windows and Mac OS X is the new Chrome OS from Google. All laptops that come pre loaded with Chrome OS are branded as Chromebooks, irrespective of brand or model. Currently, Acer, Samsung and HP are making some Chromebooks but surely, more laptop makers will join in in due course of time with a wider range of products.

Best of both worlds – dual booting with chromium

As we’ve discussed in earlier chapters, Chrome OS and Chromium are two separate but related versions of the same operating system. Google Chrome OS is the officially supported operating system that comes hard-loaded on Chromebooks and has greater performance built into its design. Many features such as Flash, PDF, MP3 and MP4 support as well as update services are unique to Chrome OS due to Google’s licensing deals and can’t be found on the open source Chromium OS.

Salvaging a chromebook and making your personal cloud

Given the rapid pace of technological development and the monthly releases of newer personal computing devices, the rate at which people upgrade computers is rapidly increasing. With nearly 500 million units of computer devices like laptops, desktops, netbooks and ultrabooks being sold every year the amount of technology that is discarded in the name of upgrades is tremendous. In America alone over 100,000 computers are discarded everyday. In most cases the reason behind such trashing is the inability of the hardware to keep up with software developments in operating system usage and gaming.

Must have apps for a chrometastic experience

Once you’ve set up your Chromebook or Chrome OS system on your own machine the next step is setting up all of your applications. The typical Chromebook OS comes bundled with a variety of apps that make it easy for you hit the ground running and get things done. The list of apps that can be found on a Chromebook are easily available through the Google Web Store and can be loaded onto your own version of Chromium OS or Chrome OS. The default apps include: Google Web Store, Google Search, YouTube, Gmail, Google Calendar, Google Maps, Google Drive, Google Docs, Google Sheets, Google Slides, Google+, Hangouts, Google Play, Google Play Books, Google Play Movies, Calculator, Camera, Chrome Remote Desktop, Chrome+ Photos and Google Keep.

So, you’ve decided to give Chrome OS a try. That’s great but even as you go about learning its ins and outs, it’s handy to get use to its design philosophy. Unlike other traditional operating systems most of your major activity are going to be confined to the web. Only when you wish to play local media will you be using the in-built media player, but otherwise will turn to one of the many millions of web apps that will help you accomplish your tasks.

The cloud is but a connected ecosystem of devices and the possibilities become infinite with the Internet of Things. In the future, cloud computing is set to take on a real-time, anticipatory intelligence role which will be able to predict our activities and needs before they happen. The current projects around the world will give a massive boost to cloud computing, making it more viable and within reach of everyone. A few examples if such projects are the Google Fiber project which aims to provide blazing fast internet speeds at 1000Mbps and then there is Project Loon, which aims to bring connectivity to rural and remote areas, thus ensuring that you are never out of range.